16 May 2013
22
For the third year, Europe has been stirred up by protests. Recently, they caused the resignations of governments and early elections in Spain, Portugal, Greece, Slovakia, Slovenia, Romania, Bulgaria ...


In the year of the 55 anniversary of the European spring 1968 of the year, when mass demonstrations of workers swept across most of Europe and the West, and the East, revolutionary expectations are understandable. But the reasons for the new wave of protests one must look not in conspiracy theories. They are in the structure of the economies of the countries of Europe at the end of the twentieth century, only remotely similar to capitalism as Marx knew him. The "capitalism" of modern times is more like the economics of the distribution of the feudal type than it is like classical capitalism with its free enterprise, which is now possible only on the outskirts of the world economy. 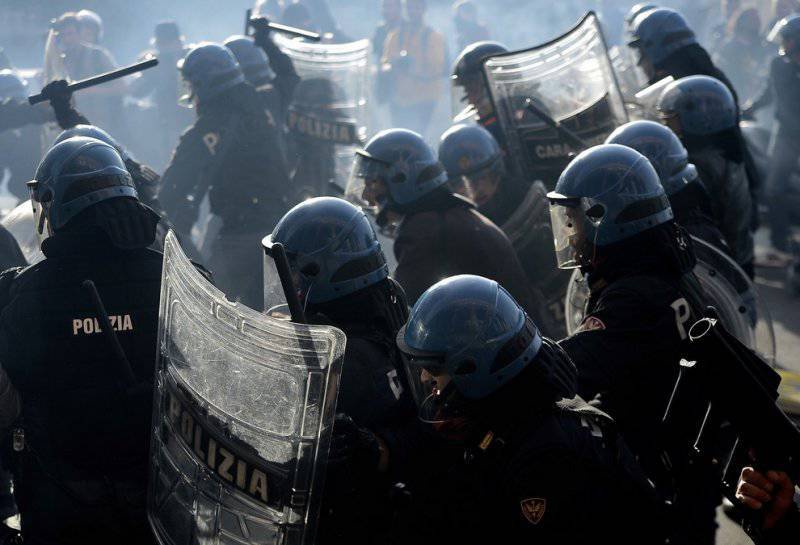 It can be argued that the state had previously regulated economic activities, citing the issuance of trade patents by the kings and the like, but the number of “security” documents for business has now translated the situation into a different quality. Along with the state, oligarchs and TNCs now restrict the freedom of entrepreneurship: owning supermarket chains with the greed of feudal lords, they charge manufacturers for "entering the market", and the banks surpassed the usurers of the Middle Ages in sophistication of enslavement methods. It is in their interests that the state regulates the markets, namely TNCs - the main recipients of subsidies and government orders.

In this situation, the requirement of free enterprise would be more logical than the slogan of the abolition of capitalism, hovering over the protest movements of Europe. And if the protesters still do not understand, then the EU managers are clearly aware that they are dealing precisely with the crisis of the distribution economy, and not with poster capitalism, and are looking for a way out in the revival of an independent producer. It was an independent producer who became the main character of the program of the Prime Minister of Spain, Mariano Rajoy, and was called up to them in 2014-2015. to pull the country out of recession, at the same time freeing it from 26% unemployment.

Similar programs to stimulate small businesses in Europe are plenty, but there is ideological paradox: Why does the bourgeois state purposefully revive an independent producer, the very one that the Communists, who semi-presumably call it the petty bourgeois, should disappear without a trace with the development of capitalism? His return is such an obvious fact that even the Communist Party of Greece, which has a reputation as a Stalinist, has left an arrogance and in its documents calls these people self-employed, which is closer to the truth.

The "natural" boundaries of capitalism

This can be explained from the theory of Rosa Luxemburg on the existence of a limit to the development of capitalism. Classic capitalism, becoming global by the end of the twentieth century, simultaneously exhausted its growth opportunities. It turned out that without a neighborhood with the so-called traditional mode of production, capitalism turns into an economy of distribution and is doomed to stagnation. He may even die from a shortage of workers and carries them from the periphery. When the population of Europe and the world was divided as much as possible into hired workers and capitalists, this production model lost its perspective, and its growth limit began. Reaching this limit has caused not only the current systemic global crisis. and the desire to revive independent producers, but also posed the question: does production make sense at all?

With all the sins of statistics and the CIA, from whose site these figures are taken, there is an obvious tendency to talk about the information economy, where the service sector is medicine, education, science, etc. has priority over basic industries - agriculture and industry.

But service people - only auxiliary workers, and their great predominance over "pure producers" is not rational for production, aiming to make a profit, as real profit disappears. Figuratively speaking, if 5% of the population are production owners, 25% is production workers, then the remaining 70% is a service sector for them and themselves, which does not create a real product and profit. From the point of view of managers, this is a ballast that must be eliminated.

Recommendations for "optimizing" the population were voiced in the 1990s, and soon they found "humane" ways to implement it: from propaganda of same-sex marriage to "shock therapy." "Shock therapy" was tested on Bulgaria and Poland. But for the former welfare states from Western Europe, where citizens, unlike the USSR, were guaranteed not only work, but also decent participation in consumption in the event of unemployment, they are only starting to try on, which causes protests.

The development of capitalism: an attempt to "walk in a circle"

The reason is still in the same distribution economy, assuming that all benefits are distributed among citizens depending on social status and place in the service-production hierarchies. Ideological and other features left their imprint on the distribution system and on the sources of state budget filling, but the principle of functioning of the economies of both Western and Eastern Europe was the same, up to many years of planning.

At first, such socially oriented states pleased almost everyone, while they themselves competed among themselves in the volumes of goods distributed among citizens and the number of students. But after 50 years it was found that such economies are so much organized that there is no place for them, especially decent ones for new generations. The service sector, including the bureaucracy, has grown in harmony with Parkinson’s law to a level where “there are three foremen for one slave” and science, although it has become a productive force according to Marx, but its organization is far from rationality. So began to postpone the "thrombus" of the unemployed youth, the services sector and retirees of rapidly aging nations.

The budgets of individual countries somehow coped with this, but the construction of the EU as an empire of distribution unbalanced them. The European Union was the name of everyone, seducing a high standard of living, but this required the merging of national economies into a single distribution economy, which cannot be done mechanically. Therefore, questions have arisen, such as how much to leave the Greeks and Bulgarians, who in the EU economy are based on the role of service workers resorts and farmers.

There were "nation-workers" and "nation loafers," as the German media in the Greeks called in 2011, for which they painted Angela Merkel in the form of SS. In addition, the "idlers" suddenly overgrown with huge debts.

But such a termination of the Greeks had the opposite effect. Their disparate protests against 2012 merged into a national movement, the mouthpiece of which was the left-wing party of SYRIZA, which threatened to abandon debts and review relations with the EU. The ghost of the revolution in Greece, which could blow up the EU, was so real that its managers stopped treating the Greeks and even gave loans. Remembering this lesson, EU managers have already discussed options for postponing debts of Ireland and Portugal, but this does not mean giving up the policy of getting rid of "extra people."

Increasing the retirement age, the commercialization of education and health, rising prices for transport and housing, the freezing of wages and benefits, lengthening the working week, job cuts, etc. - this policy will continue further - smoothly or in spurts - will depend on situations in different countries. The goal is to get rid of the "extra people" as much as possible and to reduce the "ration" remaining. This means that local and national protests will continue to occur in Europe.

Many will rebel. There will be new parliamentary revolutions with the resignations of governments and special elections. Everything it reminds of riots and rebellions of the middle ageswith the difference that then the producers rebelled, and now the consumers requiring only to maintain the usual level of consumption and loyal to the economy distribution, in which they often perform meaningless functions. Hence the theatricality of the protests.

The economy of distribution suits many, and the majority in it does not suit only decreasing “rations”, but not their status.

Ctrl Enter
Noticed a mistake Highlight text and press. Ctrl + Enter
We are
The world we leave, the world we enter, and the world between themAbout Stalin and Khrushchev
22 comments
Information
Dear reader, to leave comments on the publication, you must to register.