20 May 2013
18
For some unknown reason, I really really want to, and I would like to believe that I'm not alone, I like all kinds of "perversions" in the gunshot weapons. Recently, something really new and bold is not to be found, since everyone is trying to justify their developments financially and the profits have been calculated even before the first sketch of the weapon appears. Previously, everything was different, before designers searched, created, even if they knew in advance that their development would never go into mass production and would remain only a prototype. However, there are exceptions to the rules, which, despite their obvious shortcomings and unusual designs, nevertheless went into mass production and took their place in the arsenal of the army or police. I propose to get acquainted with one of such bold samples in this article. It will be a Japanese machine gun designed by Kijiro Nambu, known for its pistols, namely the Type 11 machine gun. 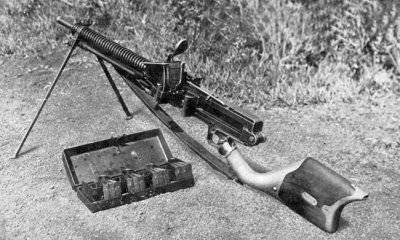 In general, it is not surprising that this machine gun was adopted, despite the fact that it had enough flaws. Firstly, it’s difficult to argue with yourself when you develop a weapon yourself and in fact decide for yourself whether it will go into series or not, and secondly, Japan needed a machine gun of its own design, since the cost of buying such a weapon from someone were very large. In addition, we should not forget that Japan is a country of people with imperial manners, which does not fit in with the fact that the country does not even have its own weapon. In general, since there were only a few gunsmith designers in the country, there was no particular choice, although it was possible to simply produce weapons under license, but pride, apparently, did not allow. 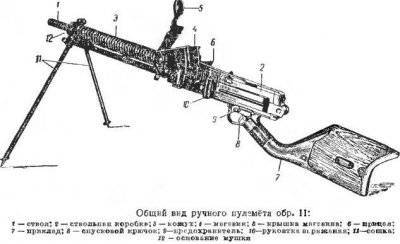 One way or another, Kijiro Nambu developed his own weapon, while setting himself the task of lightening weapons and ammunition to the maximum. The designer coped with the task, but the implementation of the conceived, in my opinion, was lame. Machine gun type 11 ate not from the store, did not have tape feed, and received ammunition from the clips. It all worked as follows. On the machine gun was installed receiver for equipped clips in which the ammunition was packed. 5 cartridges were placed in one holder, they were stacked on top of each other in the number of 6 units, that is, the total was 30 cartridges. The mechanism for supplying ammunition to the machine gun was the following design. From the bottom holder with a gear, connected to the bolt of the weapon, a new cartridge was fed after each shot, which pushed the cartridge case out and took its place. Accordingly, the cartridges remaining in the cage shifted. When there was no ammunition left in the bottom holder and there was nothing to give, the empty holder was thrown down through the slot in the ammunition box. Throwing an empty clip was carried out due to the impact of the ammunition box cover, which was spring loaded with a very rigid spring. So, the cover pressed on the top row of cartridges in the cage, respectively, under these pressures, the bottom empty cage was ejected, and the next one with the cartridges became its place. What are the benefits of this? The weight of the transferred ammunition was reduced, the equipment of the clips was simplified. There were a lot more minuses. First of all, the main drawback was the low rate of fire equal to 400-500 per minute shots, as at higher speeds, the sleeves were deformed when fed, which led to failures when sending the cartridge into the chamber .. Big breaks in shooting when reloading weapons were also clearly not a positive trait. In addition, to ensure the normal operation of the ammunition supply system, the cartridges had to be lubricated, and this lubricant very well sat dust, sand and other amenities of field conditions, which led to weapon failures, as well as increased machine gun wear. In addition, the spring of the lid which pushed the ammunition down was very hard, which literally deprived the fingers of inattentive loaders, let me remind you that everything was lubricated.

Actually for the last reason such weapons did not appear here. Domestic designers managed to make a similar machine gun with a similar ammunition supply system, expanding the number of simultaneously loaded holders and their capacity, but on the tests of this weapon one of the commission members clearly demonstrated why we did not need such a sample. Putting the pencil on the edge of the ammunition box, he slammed the lid, which, thanks to a stiff spring, simply cut the pencil, with the loader’s fingers it would be the same. Well, such injuries on the battlefield were simply no good.

Automatic weapons does not stand out as the ammunition system. The machine gun is built according to the automation system with removal of powder gases from the bore of the weapon with a long piston stroke. An interesting point was that the weapon failed to adapt to the rifle cartridge of the teacher and predecessor of Nambu, Arisaka. The ammunition sleeve had to be reduced, respectively, and the powder charge. Thus, in addition to the new machine gun industry had to also develop a new ammunition.

We should also pay attention to the appearance of the weapon, in particular, the butt, which is mounted under the receiver box behind the trigger. This butt is made this way for no reason, it houses a set of tools for servicing weapons, and the shape of the butt itself gives the model its own special look, due to which the weapon is not confused with anything else. It is difficult to say how easy the machine gun is when firing, but having estimated the tilt angles of the handle and the location of the butt, we can assume that the weapon is quite acceptable in ergonomics. The cooling of the barrel of the machine gun air, the length of the weapon itself is 1100 millimeters. The machine gun proved to be quite good for firing at distances up to one and a half kilometers, which is explained by a barrel of short length and weakened ammunition. The weight of the weapon was 10,7 kilogram without ammunition.

Despite the fact that this weapon had many flaws, this machine gun was in service with the Japanese army until the end of World War II. The power supply system of the machine gun interested many, but further prototypes did not matter. In general, the weapon is interesting, and even at a certain angle it is pretty, but the taste and color ...

Ctrl Enter
Noticed a mistake Highlight text and press. Ctrl + Enter
We are
The main varieties of the Nambu 94 pistolNambu 94 Pistol (Nambu Type 94 Pistol)
18 comments
Information
Dear reader, to leave comments on the publication, you must to register.