Squadron "Normandy - Neman" on the fronts of World War II 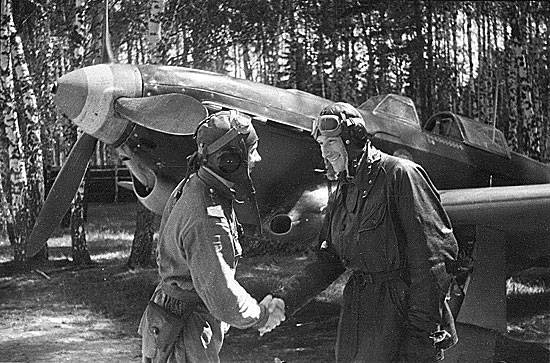 In March 1942, the Free France National Committee turned to the USSR Government with a proposal to send a group of its pilots and aircraft mechanics to the Soviet-German front. On March 31, consent was obtained. Of the best pilots of the 1st Free French Air Force fighter group, based at the time in Lebanon, at Rayak Air Base, on September 1, 1942, was formed aviation group number 3. Soon it was transformed into a squadron, received at the request of the personnel the name "Normandy".


25 November 1942. An agreement was signed on the participation of French Air Force units in military operations in the Soviet Union. Through Baghdad personnel of the squadron "Normandie" was transferred to Tehran, where in four transport planes flew to the Soviet Union. Already on November 29, French volunteers landed at the airfield of Severny, Ivanovo. Major J. Puliken and Chief of Staff Senior Lieutenant J. de Pange, as well as pilots J.-. L. Tulle Littolf A., J. Risso, A. Preziosi, A. Poznan, R. Derville, A. Durand, M. Lefevre, R. de la Poype, I. Bizen, D. Begen, M. Albert and N. Castelan. The technical team was headed by aviation engineer A. Michel. Under the command of Major Pulikov began training at the training airplanes UT-2, U-2, and then at the Yak and Yak-7-1. Inspectors on piloting techniques of the 6-th reserve aviation brigade of captain P.I. Druzenkova who flew almost all the fighting Soviet aircraft, as well as some of the captured German fighters and bombers. By order of the commander of the Red Army Air Force from December 4 1942, the Normandy Fighter Squadron was incorporated into the USSR Air Force. By the early 1943 was already all the "Normans" flew "yak", and the French mechanics underwent practical training on operation of the airplane Yak-1B.

The French “yaks” were decorated with red stars, but between the screw and the cabin on both sides of each car there were three color bands: blue, white and red - the colors of the French state flag.

In mid-March, an inspection inspection of the squadron's readiness for dispatch to the front took place at the Severny aerodrome. It was conducted by the head of the French military mission, Brigadier General E. Petit, and the representative of the Red Army Air Force Commander, Colonel S.T. Lewandovich They recognized the "Normandy" fully operational. March 22 1943, the squadron flew on the frontline airfield Linen Factory (in 25 km from Kaluga), which were based bombers Pe-2, and temporarily joined the 204-th Bomber Division.

After getting acquainted with the area of ​​the fighting, which the French squadron produced from the airfield Mukovnino (Linen Factory), it was subordinated to the commander of the Smolensk 303-th Fighter Division. It includes it in the future and led his combat activities based consistently on the ground: Vassilyevskoe (district Masalskaya) Hotenki (Kozelsk district), Savior and Demensk Monastyrshchina (west of Smolensk).

On the morning of March 26 alert to intercept enemy aircraft, who was walking at an altitude of 4000 m, it was raised to lieutenant A. Durand and R. Derville. The German pilot managed to slip away then, but his attempt to go deeper into our rear was thwarted. Thus, the first two sorties were carried out and the squadron began its combat activities.

French pilots literally rushed into battle. They considered the day lost if they spent it without departures. Soviet commanders had to restrain their enthusiasm as well as the "Normans" was not yet fully mastered the tactics of modern air combat, and it could destroy the squadron. Life tells us that in the conditions when the Luftwaffe aircraft operated by large groups of coherence in the actions of our fighters and mutual support were of paramount importance. 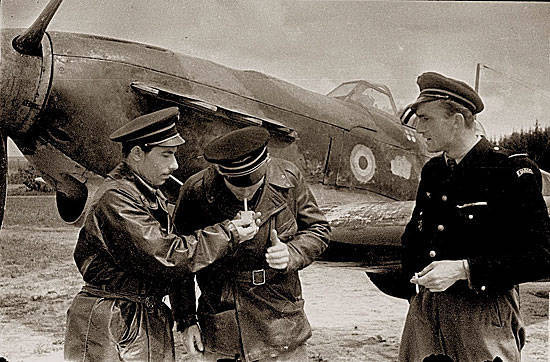 French pilots of the squadron "Normandy", who fought on the Soviet-German front of the Second World War

But here came the long-awaited hour.

In the afternoon of April 4, the commander of the 204 bomber aviation division unexpectedly arrived at the command post of the Normandy, accompanied by staff officers and two regimental commanders.

He set the French squadron of combat mission: to cover the bombers that will strike at the enemy artillery batteries. Having received such a responsible mission for the first time, the pilots of the Normandy squadron carefully prepared for its implementation. Early in the morning of April 5, everyone was already on the airfield. Not without excitement, mechanics tried engines and carried out a preflight inspection of the aircraft that were on their first joint sortie. Major Tyulyan himself checked the flight maps and pilots knowledge of the order of interaction with the bombers. A few minutes before taxiing to the start, the pilots listened to the latest instructions from their commander.

“When we meet with the enemy, we will attack him immediately with a strike group, which I lead,” minted Tyulyan. - We must be attentive and brave. Fight not to get involved and do not forget about the covered bomber. They should be completely safe. Remember that the honor of "Normandy" will largely depend on this first joint combat flight.

- By airplanes! - Tyulyan ordered, when the officer from the meteorological station finished the weather information.

The pilots, who had been waiting for this team for a long time, ran to their yaks. A few minutes later two nines dive bombers Pe-2, led by Colonel and Major Andreev Dimchenko, were already heading west under cover of fighter squadron "Normandie".

Two Yak-1 aircraft, piloted by French pilots, covered the bombers. When the bombers performed their work, the fighters noticed the approach of two EF-190, which flew at an altitude of 3000 m. At the same altitude were both aircraft of French pilots. Bombers under the cover of two Yak-1 lay on the opposite course. German fighters began to pursue them. Pursuit continued 6-8 minutes, after which one of the PV-190 attacked Lt. Duran right horizontally. To get out from under the fire of PV-190, Lieutenant Durant made a turn towards the attack. PV 190 opened fire from a distance of 300 m and continued to lead him on a bend. At that moment, at the distance of 150 – 100, m Lt. Durant met the second PV 190 on the bend from the angle 3 / 4 and opened fire on it.

As a result of this attack, the PV-190 began to smoke and went to the ground. The first PV-190 continued to fire on Lieutenant Durant. Wanting to get out of the sphere of fire attacking FW-190, Lieutenant Duran banked even more abruptly and went into a tailspin, simulating the fall. The trick failed, Focke-Wulf stopped the pursuit, Lieutenant Duran left a small Virage climbing began to leave the battlefield. It passed at a distance of 200 – 300 m and slightly above the plane of Senior Lieutenant Preziosi, who at that time attacked the PV-190 from the bottom of the bend. The fire was opened from a distance of 100 m and stopped at 15 m from the enemy aircraft.

As a result of this attack, the enemy fighter went over to the bow, then to a sheer peak and fell into the forest in the Lyudinovo area. When it was finished with the second EF-190, Lieutenant Durand joined Senior Lieutenant Preziosi, and both of them safely reached their airfield and landed there.

The Soviet pilots were pleased with the actions of the squadron "Normandy". Major V.I. Dymchenko, the leader of the second group of bombers, after landing, thanked Major Tyulian for good cover. That was the beginning of the joint combat flights of Soviet and French pilots. 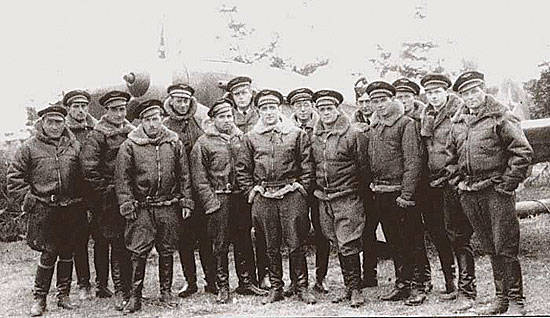 Since that time, "Normandy" has become regularly involved in the performance of combat missions. A week later, covering our troops, she held a second air battle. It occurred in the area of ​​Spas-Demensk 13 on April 1943. Six “yaks” under the command of Major Tyulian fought with nine German fighters. In battle, three enemy aircraft were shot down. However, the victory came at great cost to the French: from a mission that day have not returned pilots R. Derville, A. and I. Poznań Bizen. This was the first heavy loss of the squadron "Normandy".

Losses in the air battle conducted alerted the French pilots. In subsequent meetings with the enemy, they acted more cautiously and carefully. Having strengthened observation of the enemy in the air and having established mutual notification by radio, the French recognized tactical traps of the enemy in time and did not allow him to attack suddenly, especially from the sun or from behind the clouds. 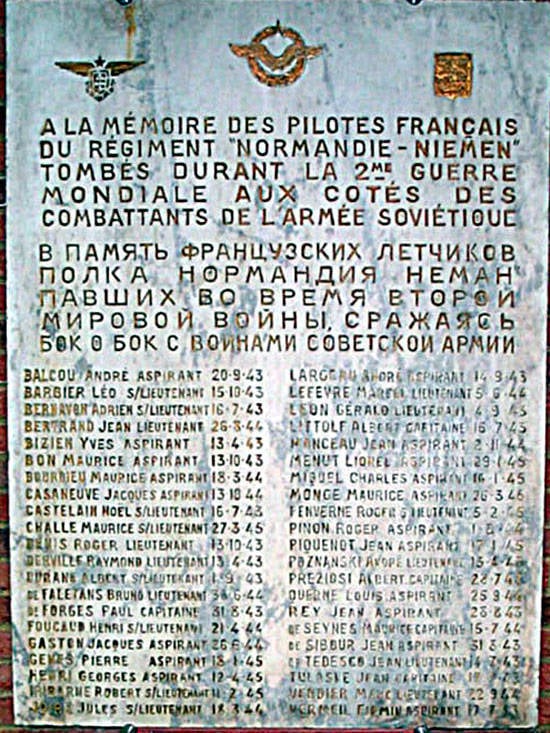 The list of the dead pilots of the regiment "Normandy-Neman". Museum in Le Bourget (France)

During his stay on the Soviet-German front from the squadron "Normandie" March 25 1943-th of May 9 1945 city, and later the regiment "Normandy - Neman" held glorious path of the Kursk Bulge to Konigsberg. French pilots made more 5200 sorties, conducted 869 air battles, shot down 273 and damaged 50 Nazi aircraft. 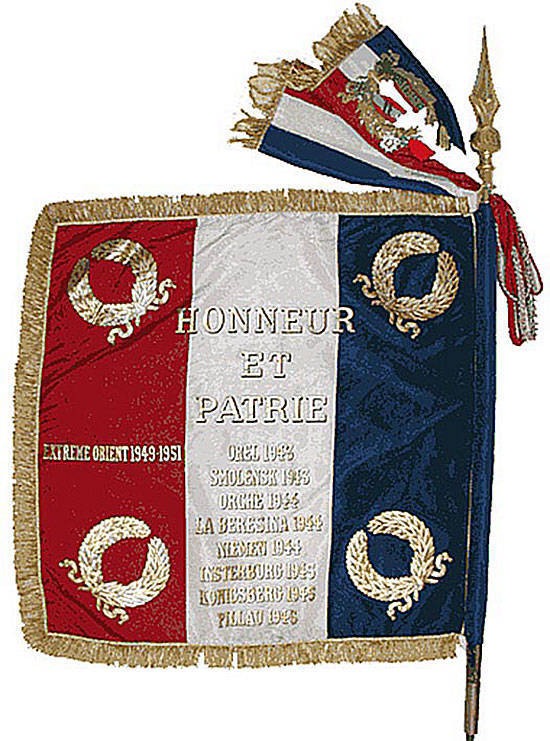 20 June 1945 The French pilots on the 41 combat aircraft Yak-3, donated to the Soviet Union by France, flew home. In France, the fighters of the Yak-3 pilots of the squadron "Normandie-Neman" exploited until 1947 g. 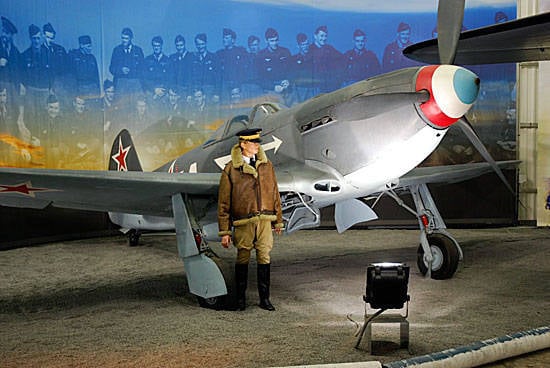 Fighter Yak-3 of the Normandy-Neman air regiment. Exhibition at the air show at Le Bourget

In the 1956 in Moscow was installed memorial with the names of all the dead pilots, and in 1964, at the Vvedensky cemetery at the grave of a French pilot, whose remains were found in Orel, was a monument to the Unknown pilot to the regiment "Normandy - Neman". 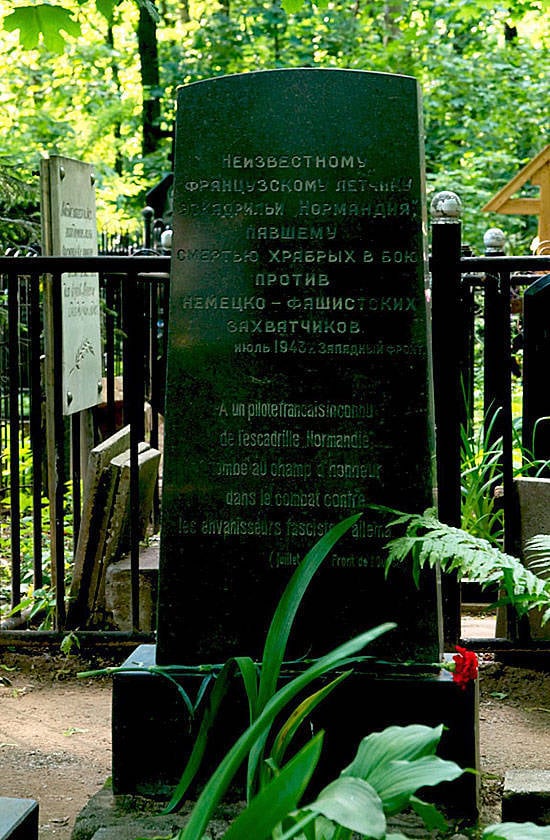 The site of the graves of the Normandy squadron at the Vvedensky cemetery in Moscow. Tomb of the Unknown French Pilot 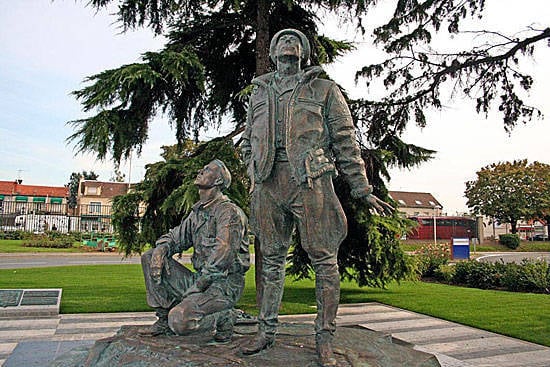 In an open competition, which was conducted by the Moscow Committee for Architecture in collaboration with the Committee of Culture of Moscow and the Russian Academy of Arts, he won the project of the creative team, headed by People's Artist of Russian sculptor Andrei Nikolaevich Kovalchuk. 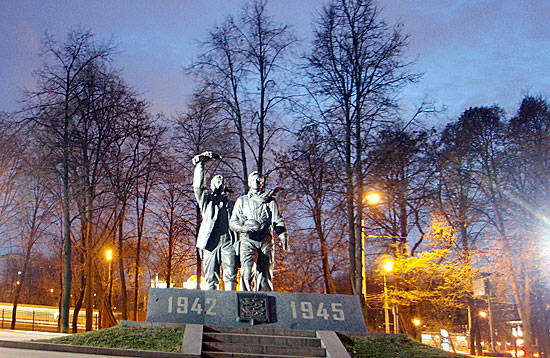 Monument to the pilots of the regiment "Normandy-Neman" in Moscow, Lefortovo district. Photo A. Terentyev

The monument was unveiled at 2007 in Lefortovo by Russian President Vladimir Putin and French President Nicolas Sarkozy. The main and main idea of ​​the monuments is fraternity arms Soviet and French pilots during the Great Patriotic and World War II - displayed in the figures of two pilots, going after a successful sortie on the runway of the airfield. 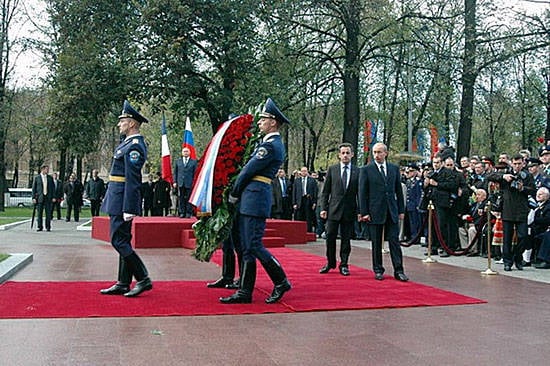 As part of the French and Russian Air Forces, before 2000, there were military aviation units named Normandie-Neman.

French fighter group "Normandy - Neman» (GC II / 6) based in Colmar, participated in the colonial war in Indochina (1946-1954), as well as in the NATO military operation against Yugoslavia (1999). 3 July 2009. She was officially disbanded. Part of the aircraft and pilots, as well as the flag of the regiment were attached to the base in Reims (Champagne).

The Russian 18 th Guards assault (before 1993 - fighter-bomber) air regiment "Normandie-Neman" was stationed in the village. Galenki, located in the Primorsky Territory. It was disbanded in 2009.

In the 2010, the soldiers of the regiment "Normandy - Neman" held on the Red Square in Moscow in the parade of the military parade dedicated to 65-th anniversary of Victory in the Great Patriotic War. 14 September 2012 of the Mont-de-Marsan held celebrations to mark the anniversary of 70-regiment "Normandy - Niemen", in which one of the fighters, now being on shelf arms (Dassault Rafale F3 series) with onboard 118 the IX-numbered, got a coloring with a big red star.

Ctrl Enter
Noticed oshЫbku Highlight text and press. Ctrl + Enter
We are
Diplomats of the People's Commissariat of Defense: on the eve and during the warThe history of one regiment
Military Reviewin Yandex News
Military Reviewin Google News
17 comments
Information
Dear reader, to leave comments on the publication, you must sign in.