Patriarch in China: from Schwarzenegger to Bruce Willis 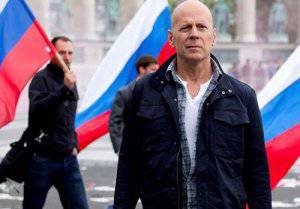 China is Russia's only strong ally on the world stage. If we do not unite in the face of coalitions trying to play the role of decision makers in the world, then our countries can wait for the implementation of scenarios implemented, for example, in Libya and Syria ... Do you think that I exaggerate?


For example, I am alarmed by the fact that in the last box office blockbusters with Arnold Schwarzenegger, Angelina Jolie, Tom Cruise and Bruce Ullis in the lead roles, the fighting takes place on the territory of Russia. And in Moscow, according to the idea of ​​foreign screenwriters, just some kind of den of world terrorism. Does it scare you that the image of world evil is being molded from Moscow again?

So, back to our allies - the Chinese. Remember which countries blocked the invasion projects in Libya and Syria, which they aggressively dragged through the UN? That's right, Russia and China. Therefore, I am just sure that we should try to find as much as possible in common between our countries, and not only in foreign policy. One of these moments may be Russian Orthodoxy.

Many have probably heard that His Holiness the Patriarch is now in China. But few people guess what strategic task the head of the Russian Church is facing. I am confident that before the head of the Church is quite clear geopolitical goal. Now I will try to explain how I understand it. 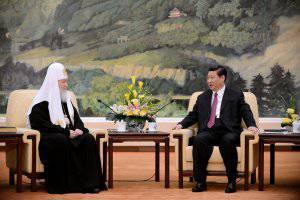 Today in China, Orthodoxy is in its infancy. And this is not surprising. The Chinese authorities do not want to warm the fifth column in the form of this or that confession with a center in a foreign country. Therefore, in China, foreign priests can serve only for foreigners, but not for the Chinese. The main condition for the performance of religious services for Chinese citizens is the Chinese nationality of the clergyman.

Unfortunately, the last Chinese Orthodox priest died, if I'm not mistaken, at the beginning of 2000's. So the Chinese Orthodox Church is inherently decapitated. Orthodox communities in China are, roughly speaking, hobby groups in which members do not have the opportunity to receive church ordinances. And to ensure that the Chinese suddenly did not receive these sacraments from the hands of foreign priests, the state administration on religious affairs strictly observes. For example, when last summer the Orthodox Chinese from Harbin came to visit Blagoveshchensk - their representative did not give "good" for communion of the Harbin people in the Russian church.

Christian boom and profit of Russia 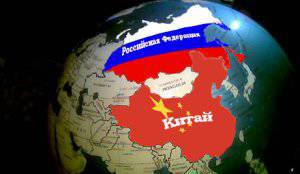 According to experts, China is now experiencing a Christian boom. Statistics show an increase in adherents of Catholicism and Protestantism among the Chinese. And it is justified. Both Catholics and Lutherans in China have their episcopal Chinese and Chinese priests, which means that they can officially serve for the citizens of the PRC. Unfortunately, Orthodox Christians in this regard are all neglected.

Met philistine replicas. Say, the Moscow patriarch came to expand his sphere of influence. But the hypothesis is untenable, since the Russian Orthodox Church granted full autonomy to the Chinese Orthodox Church as early as the 50 of the 20 century. Speaking in narrow-minded terms, the Russian Church will have nothing to do with it. But in geopolitical terms, the benefit for all of Russia is simply invaluable.

If you explain it on your fingers, then an Orthodox Chinese against an Orthodox Russian will not conceive anything bad. After all, Orthodoxy without exaggeration is the national code for Russia. And if this code is integrated into the consciousness of the Chinese, the relations between China and Russia will reach a qualitatively new level. Maybe it sounds a little naive, but I'm sure that it will be so.

PS I did not consider in this publication the spiritual consequences of the development of Orthodoxy in China, because I consider that they are simply obvious.

Ctrl Enter
Noticed a mistake Highlight text and press. Ctrl + Enter
We are
A great interview with Sergey Lavrov: about Ukraine, Obama and IranWhat you didn't want to know about England
272 comments
Information
Dear reader, to leave comments on the publication, you must to register.