US Espionage in Venezuela: Preparing a Coup 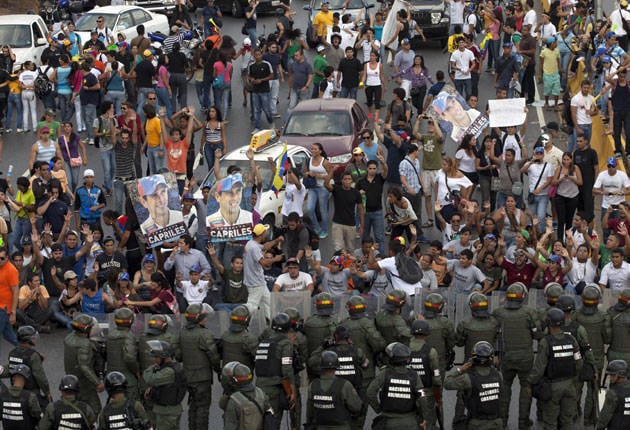 US citizen Timothy Tracy was arrested by the Bolivarian Intelligence Service (SEBIN) 25 on April of this year at Maiquetia airport when he wanted to leave Venezuela. The arrest was carried out on the direct instructions of President Nicolas Maduro, who was reported on the suspicious activity of an American on several fronts: intelligence gathering, incitement to anti-government riots, financing extremist organizations ...


Tracey arrived in Venezuela in September 2012, under cover of the legend, as a documentary filmmaker, ostensibly to cover an election campaign in which Hugo Chavez and opposition candidate Enrique Capriles were the main contenders for the presidency. From the very first days of his stay in Venezuela, Tracy behaved outside the box. He never appeared in the Association of Foreign Journalists (APEX). Even independent journalists consider it necessary to register with APEX, as this makes it easier to work in the country, but Tracy did not do this, not wanting to attract additional attention.

Tracy was well versed in Caracas, without any difficulties, he found the people he needed. He established the first contacts with radical oppositions on the list of “recommended contacts” he had and began to distribute money between them. In the number of wards Tracy included ultra-right groups. The American also noted with contacts with the leftist grouping Tupamaros, whose leadership has repeatedly stated that it is ready for armed resistance if the opposition tries to overthrow the legally elected Bolivarian government. Tracy, in particular, tried to find out the real combat potential of the Tupamaros and the level of interaction of this group with the security forces. According to SEBIN, the main operational objective of Tracy was to provoke conflict situations, clashes between the opposition and the Chavista, creating prerequisites for the outbreak of civil war.

Using the cover legend, Tracy surprisingly always turned out to be close to the center of events. So, he filmed a briefing on countering law enforcement agencies, which gave members of youth militant groups retired General Antonio Rivero, one of the leaders of the extremist Narodnaya Volya party. The camera Tracey and unrest at the embassy of Cuba in Caracas 14 February 2013 were recorded.

He was spotted by agents of SEBIN in Puerto Cabello, in the area of ​​the main naval base of Venezuela. He expressed an increased interest in the presidential palace, tried to conduct his shooting (which is prohibited without special permission), was detained by the guards and released after a brief trial. Increased security measures around the perimeter of the palace were introduced in May 2004. The reason was the failed attempt of the ultra-right conspirators with the help of a detachment of Colombian paramilitaries in 130 people dressed in Venezuelan military uniforms to organize the storming of the palace with the aim of assassinating President Chávez.

For SEBIN analysts, it is obvious that the skill and perseverance that Tracy showed for implementation in various organizations, without any doubt, indicates that he has special training for working in an “unfriendly environment”. Where he got it - at the CIA, in the US military intelligence or at the Drug Enforcement Administration (DEA) - for Venezuelan investigators is still unclear. The American does not confide during interrogations and stubbornly imitates poor knowledge of Spanish (interrogations are conducted through an interpreter, and the accused has time to ponder over the answers).

Venezuelan journalist Ivan Cardinale, who published an article about Tracy on aporrea.org, said that immediately after the scandal with his arrest she “combed” the entire Internet and found nothing, absolutely nothing about this “filmmaker”. However, after two or three weeks, she repeated the attempt and was surprised at the abundance of materials that appeared. The conclusion is simple: the US intelligence agencies urgently supplemented the cover legend of Tracy. Apparently, sending him on a mission to Venezuela, it was believed that the local security agencies in the conditions of the crisis caused by the serious illness of President Hugo Chávez would have no time to deal with a stringer documentarian. Even the international passport he was issued only for a year. Expected to end the "regime" in this short time?

When Tracy was detained, a campaign was launched in the United States to defend him. About the innocence of the “documentary filmmaker” against whom, I recall, numerous evidence has been gathered, his relatives and friends said. Well, parents can be fake, and two or three friends at Georgetown University - fictitious. Even about the time of study at the University of Tracy is reported non-specifically, without indicating the period of study. Most likely, because this university is not without reason considered a “forge of personnel” for the CIA. President Obama himself spoke in defense of Tracy: “This American citizen who, apparently, was detained (by the Venezuelan authorities), will be considered by us as an ordinary American citizen who has fallen into a difficult legal situation in a foreign country. To claim that this man is a spy is ridiculous! From time to time we are confronted with rhetoric of this type, coming from Venezuela. ”

As for Tracey’s “colleague,” Aengus James, he is really noticeable in this field, but it seems that the arrested “documentary film maker” Tracy does not appear in any of his films either as a co-author or as a consultant. It can be assumed that James was asked to help a compatriot who has fallen into a difficult situation, who is on the front line of the struggle against "communism" in Latin America. James agreed to help: “Venezuelans are not holding a CIA employee or a journalist under arrest,” he said. - This is just a kid with a movie camera. The idea to go to Venezuela and make a documentary there was born to him at a party in Florida. He met a girl who told him: “If you are indeed a documentary, why don't you tell us about what is happening in Venezuela at the moment?” Tim is he, if you tell him something like that, he’s here It also takes up the case, although it knows nothing about the political situation in the country and the consequences of such an act. Tracy has no political views. He is busy telling all sorts of worldly things. stories. He never worked with any government. ” Well, a good invoice was introduced by James: Tracy is an apolitical romantic, with an adventurous streak, a lively and naive kid in 35 years. What to take with this?

In the publications that have appeared, there is a report that Tracy was collecting material for a film about criminal organizations operating on the northern border of the United States that are involved in smuggling, drug trafficking, and "live goods" trade. But where is this movie? Perhaps there, on the border with Canada, Tracy only portrayed the "filmmaker", and in fact led the DEA operational work on local drug groups. Could this be the reason for the initial confusion of the official US authorities regarding the “Tracy case”? The operational work of the DEA in Venezuela is prohibited in connection with past attempts by the Office to combine the fight against drug cartels with collecting compromising materials on Venezuelan politicians and the military. Those who could be recruited were used for the “controlled transit” of cocaine or to fight the Chávez regime.

The situation in the country is complicated, the US Embassy is under intensive supervision of the Venezuelan special services. Otherwise it is impossible, given the numerous facts of conspiracy organized by the embassy, ​​including the attempted coup in April of 2002 of the year and the “oil strike” of the end of 2002 - the beginning of 2003 of the year. That is why Tracey-type operatives are being thrown into Venezuela to coordinate actions to prepare a new conspiracy. From the point of view of Washington, the situation after the election of 14 on April 2013, when Nicolas Maduro defeated Capriles with a small gap, favors a “soft change” using young opposition activists and students.

Washington believes that in Venezuela there are serious prerequisites for transforming the defeat of Capriles into revenge by gradually increasing political pressure on the Bolivarian leadership. Opposition leaders operate without any restrictions, TV channels and radio stations (they are controlled by the opposition at 80 percent) provide propaganda cover, youth radical organizations escalate protest in big cities, attempt to block administrative buildings, provoke law enforcement forces to repress. The opposition’s mobilization potential is not in doubt and under certain conditions can lead to the repetition of thousands of demonstrations on April 2002, when Chavez was temporarily removed from power. Inflation, food problems arising from the sabotage of private companies (the Chilean version), propaganda campaigns about corruption by the Bolivarian authorities, a certain fatigue from the politicians of the “Chavez era”, among whom are those who operate in the ranks of the “fifth column”, - All this is not an easy problem.

Will Nicholas Maduro manage to avoid a repetition of the April 2002 scenario, when the opposition in the Miraflores presidential palace distributed posts and spheres of influence, and the Bolivarians were jailed without trial or investigation? Then the "president" Carmona instructed the nearest employees: "Chavez is to be liquidated." Capriles and his team will be no less ruthless liquidators of the Bolivarian government. Blood will spill and the Empire will definitely not interfere. Such are for her the laws of revenge.

... In April, the DAS agents of Colombian intelligence who were collecting information on the Venezuelan grid infrastructure were arrested in April 2010 in the state of Barinas. DAS accountability to US intelligence is well known. The work was done in the interests of the United States. In August, an American, a former marine, with experience of the war in Afghanistan and Iraq, was detained in the state of Tachira 2012. Before the arrest, he tried to destroy the records that were kept during the trip. Not long ago, the authorities announced a persona non grata of two US military attaches for recruiting Venezuela’s military pilots into spy networks. Patriotic officers reported these attempts to their command. Similar, seemingly scattered, episodes are more and more, and they show a significant effort to gather information for hostile purposes.

Thus, information about hydropower plants, thermal power plants, substations, power lines and other elements of the power grid infrastructure was used by the enemies of the Bolivarian regime to sabotage the supply of energy to the cities and towns of Venezuela. Venezuelans had to wait days for the restoration of power supply. When such situations are repeated time after time, voter irritation reaches a peak. This was one of the reasons for the critical increase in votes for the opposition in the presidential election of 7 in October 2012 of the year and 14 in April of the current year.

Ctrl Enter
Noticed a mistake Highlight text and press. Ctrl + Enter
We are
Shadow of ChavezExclusive interview of the RT Foreign Minister of Venezuela
17 comments
Information
Dear reader, to leave comments on the publication, you must to register.