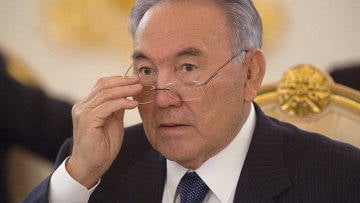 In late April, in two of his speeches, first at the Eurasian Media Forum in Astana, and then in the framework of the Istanbul Process in Almaty, President Nursultan Nazarbayev made a number of strategically important statements on the Afghan issue.


In Astana, the President stated: “I will say right away that I do not accept“ catastrophic theories ”. I absolutely do not think that the countdown timer has already been turned on, bringing the region closer to a certain “X hour” in 2014, when the active phase of the international coalition operation in Afghanistan ends. I am sure that nothing like this will happen. Although there are willing or frightening similar scenario. Frankly speaking, today in the external perception of the Central Asian region there is a strong inertia of the past. ” This is a very subtle statement given that there is always a serious conflict of interests around Afghanistan. One of the important moments of this struggle is now connected with the possible scenarios of the development of the situation after 2014, when the troops of the international coalition will have to leave Afghanistan.

It is known that catastrophic scenarios are very popular primarily among some Russian political scientists. They very often emphasize that the withdrawal of the United States from Afghanistan will inevitably lead to the power of the Taliban, that in this connection there are large-scale security threats to the countries of Central Asia. There are also active ideas about training militants of Central Asian origin in Afghanistan who, after 2014, are ready to take active steps against the states of the region. Often, parallels are drawn with the Soviet army’s withdrawal from Afghanistan in 1989 and the Najibullah regime’s fall in 1992 and the subsequent offensive of chaos in that country, which contributed to the Taliban’s rise to power.

Accordingly, it is logical to conclude that the countries of the region need to prepare for a possible recovery of the situation that existed on the eve of 2001. Then Afghanistan was divided into two parts, with Russia and Iran supporting the Northern Alliance, and Pakistan - the Taliban.

Here we must keep in mind that the essence of the geopolitical struggle of interests in the region is mainly connected with the desire of Russia and China to prevent the penetration of the interests of third countries, by which they mean primarily the United States, into Central Asia, which is strategically important for them. At the same time, the modern leadership of Iran, naturally, would not want a strategic encirclement of its territory to occur. It saw in the actions of the Taliban and Pakistan behind it a direct threat to their interests.

That is, until 2001, the interests of Russia and Iran coincided with the interests of the northern national minorities in Afghanistan, who were seriously worried about the prospects for establishing Pashtun hegemony. At the moment, the essence of the struggle of geopolitical interests has not changed, but there have been changes both inside and around Afghanistan.

When the withdrawal of the international coalition troops in Afghanistan was announced in 2014, it was all said that it was likely that the situation with the opposition of national minorities (Northern Alliance) and Pashtuns (Taliban) would be restored. It is on this basis that future plans were made regarding the development of the situation in Afghanistan. Hence the intention of Russia in 2011 to achieve the inclusion of Iran into the SCO, which China then opposed. This was also connected with the emergence in 2011 – 2012 of various projects for the restoration of structures of the former Northern Alliance in Afghanistan.

The idea of ​​including Iran in the SCO was important precisely in the context of the development of the situation in Afghanistan, because Iran historically had an influence on many Afghan groups, mainly from among the Hazara Shiites, as well as Tajiks. Without his participation, restoring the Northern Alliance would be extremely difficult.

However, in 2011, an acute phase of confrontation between Iran and the international community on nuclear issues began. Naturally, in this situation, Beijing did not want to bind itself with the obligations of protecting Iran, which would be inevitable if the latter became a member of the SCO. Moreover, the Chinese had their own broader agenda in relations with the Americans, at least on the issue of the export-trade balance or the development of the situation in Southeast Asia. In Beijing, they were also extremely cautious about talking about the US withdrawal from Afghanistan, and therefore, as from the region.

In addition, in 2012, it became obvious that as such, there would be no complete US withdrawal from Afghanistan. On the one hand, the Americans themselves announced that they would leave thousands of servicemen from 8 to 12 as instructors. On the other hand, in Tokyo, it was confirmed that the international community will continue to finance Kabul, including the maintenance of the army in 150 thousand people and, most interestingly, the police in almost 300 thousand

Both of these circumstances suggest that it is premature to talk about both the US withdrawal from Afghanistan and that they were defeated there. Rather, we can say that the Americans are implementing the so-called Iraqi scenario. Recall that at first they waged an active war against the local rebels, then announced the withdrawal of troops, although they left 60 thousand soldiers for another two years, then brought them out. At the same time, there is an unstable balance in Iraq, which is ensured by the fact that the main communities, Kurds, Shiites and Sunnis actually have autonomy, including their own armed forces, and the United States acts as an arbitrator.

Indirectly, this is confirmed by the information on the financing of the Afghan police. The fact is that in Iraq, the new American policy began with the formation of the Sunni tribal militia (about 200 thousand fighters) from among the former opponents of the American presence and payment for their services. It can be assumed that hundreds of thousands of police officers in Afghanistan are precisely the formations of regional leaders, including Pashtun tribes, who actively participated in resisting a foreign presence.

Naturally, the payment of services of the local police involves the legitimization of personal groups of influential people in the provinces of the country. In response, they must ensure security in the territories under their control. This is a very old practice of ensuring the loyalty of local forces, especially the Pashtun tribes. AT stories Afghanistan was only once under the emir Abdurrahman, when the tribes were under strict control of the central government and did not need to negotiate with them.

The recent history of the capture by militants of the radical opposition in the middle of March, among whom were immigrants from the former USSR, the district of Warduj in the northern province of Badakhshan, is very telling. This story fits perfectly into the concept of chaos in Afghanistan after 2014. Moreover, Badakhshan has easy access to the Tajik-Afghan border. However, in early April, militants from Warduja were knocked out, and the Minister of Defense Bismillah Khan personally commanded the operation.

The Afghan Minister of Defense, a Tajik by nationality, a longtime associate of Ahmad Shah Massoud, is a representative of the so-called Panjshir clan. For the Tajik military-political elite in Afghanistan, Badakhshan is a strategically important place, it provides connections to the Tajik mountainous region north of Kabul, where the Panjshir Gorge is located, with Tajikistan. In fact, this is their area of ​​responsibility. If they suddenly lost Badakhshan, this would weaken their position in the future alignment of forces in Afghanistan.

If we assume that the Iraqi scenario is to some extent implemented in Afghanistan, then the strength and influence of a group will be determined by its capabilities and responsibility for the situation in the territory under its control. Such an approach is in the interests of the main political forces in the country. They would not want to start a new civil war, the current situation is much more profitable, especially given the large-scale funding from the international community. Therefore, the Panjshertsy Tajiks are clearly involved in the process of reaching agreements on the future structure of Afghanistan, where the Americans with their 10 thousand advisors and financial capabilities will act as arbiters.

But if so, then there is no point in waiting for the apocalypse after 2014. Therefore, the statement of the President

Nursultan Nazarbayev is very verified and proceeds from the interests of Kazakhstan’s multi-vector policy. In particular, pointing out that we should not expect problems after 2014, the Head of State noted that the security system in the region, which consists of the CICA, SCO, CSTO, OSCE, is balanced, which “gives integrity to the whole system”. By this, our position compares favorably with Uzbekistan, which in 2012, just left the CSTO.

Of course, a certain security risk always exists. Especially when there is such a competition between the great powers, but Kazakhstan can afford to be above the fray. It is worth paying attention to the President’s statement that “to treat Central Asian countries as objects of external influence, without taking into account their national interests, is nothing more than a demonstration of geopolitical myopia.” It is extremely important that the Head of State clearly emphasized that we remain an independent subject of foreign policy. Because to be the object of a conflict of interests between the great powers is an extremely undesirable development of the situation, as, indeed, take the side of someone in this conflict. The loss of independence in foreign policy or its dependence on the political situation is the lot of weak countries.

For Kazakhstan, the development of the economy is of paramount importance, and one of the priorities is the restoration of the former transit potential of all of Central Asia. And on a qualitatively new basis, taking into account the changes that have occurred in the development of the region. Therefore, the President focused on transport projects, from the Western China – Western Europe road to the Trans-Afghan gas pipeline (the TAPI project). It is clear that in the latter case there are still many questions, including in the field of security, but there is a general trend towards the priorities of economic development. The same Afghanistan should learn how to make money by itself. We all need to try to get away from the logic of rigid confrontationlast decades.

Author:
Sultan Akimbekov, Director of the Institute of World Economy and Politics at the Foundation of the First President of the Republic of Kazakhstan - Leader of the Nation
Originator:
http://www.kazpravda.kz/c/1367612919

Ctrl Enter
Noticed oshЫbku Highlight text and press. Ctrl + Enter
We are
Nursultan Nazarbayev: to win independence - does not mean to preserve itWhat you didn't want to know about England
Military Reviewin Yandex News
Military Reviewin Google News
12 comments
Information
Dear reader, to leave comments on the publication, you must to register.