17 May 2013
24
The desire to save on the training of soldiers usually always goes sideways, especially when soldiers have to participate in real combat, rather than receiving a specialty in a year to go headlong into civilian life. However, sometimes there were also quite rational decisions that really allowed to save quite a lot of money on training, without prejudice to the final level of training of the fighter. The most striking example of this is the use of small-caliber pistols of similar design with full-fledged samples. Replacing full-fledged ammunition with small-caliber .22 cartridges led to a significant reduction in the cost of firing, and although such pistols did not allow to fully train the handling of normal weapons, they helped to get the initial shooting skills, which could only be fixed with that gun and cartridge, which were in service. This method of training was used not so much in the army as for training law enforcement officers, since for them a gun or a revolver has always been and will be the main weapon. In the army, however, short-barreled samples never had the status of a primary means of dealing with the enemy and were rather an auxiliary weapon, and now they have begun to lose their relevance, receiving the status of a weapon of last chance. 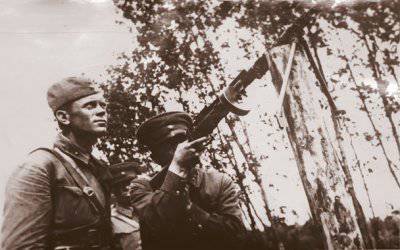 The topic of the relevance of short-barreled weapons in the modern army is certainly interesting, but this time we will not talk about it, but how the idea of ​​replacing a full-fledged ammunition with a small-caliber cartridge for training soldiers was developed (perverted). Consider this question on the example of a rather interesting, but, in my opinion, useless Blum machine gun. I just want to make a reservation that I have nothing against the designer himself and his own ideas. In this case, the gunsmith just had to perform the task set before him, not quite a smart task, with which he quite successfully coped, as it seems to me.

The fact that the machine gun is a very effective weapon was understood a very long time ago, the only overrun of ammunition was considered the only drawback of the machine gun, which made it difficult to advance this class of weapon. But in the end, common sense won out and the machine gun became for some time the main weapon of any army. Weapons due to which victory was achieved. Nevertheless, the toad did not cease to choke individuals, and it was apparently stifling strongly. In addition to a sufficiently large expenditure of ammunition in battle, it was also necessary to somehow train machine-gun crew, and it was clearly not possible to do this in words or directing a weapon with the words "tra-ta-ta". It was then that the idea of ​​using small-caliber cartridge for training machine gun calculations came. Anyone who has tried at least once to determine empirically the maximum distance for using a small-caliber rifle, understands how crazy this idea was. It's one thing to use the .22LR cartridge for learning to fire a pistol or a revolver, and it is quite another thing to use this ammunition to train machine guns.

Despite common sense, the designer was tasked with creating such a weapon. In principle, there was nothing difficult in the task, and at the moment anyone would have coped with it, but then it was only the end of the twenties of the last century and the designer had to use a fair amount of effort to ensure that the weapon corresponded at least with the rate of fire of full-fledged machine guns, Particularly machine gun DP, adopted recently in service. On the other hand, these efforts consisted only in the correct calculations, since the dimensions of the weapon made it possible to use a very long stroke of the shutter, which made it possible to vary the rate of fire within fairly wide limits.

Given the fact that .22LR munitions are very, very weak, it is not difficult to guess that the designer used an automatic shutter circuit. In order not to bother with the trigger mechanism, it was decided to sacrifice the accuracy of the first shot, so the shot comes from the so-called open shutter. In other words, the designer made the simplest submachine gun under the small-caliber cartridge .22LR in the form of a full-sized light machine gun. The length of the weapon was 645 millimeters, with a total length of 946 millimeters. The weapon had a kilogram weight of 3,3, to which was added the weight of a disk magazine with a capacity of 39 kilogram 1,1 cartridges. The rate of fire was 600 shots per minute, the trigger mechanism allowed only automatic fire. The weapon had folding bipods and sights similar to those on the DT machine gun, but calculated for the characteristics of the .22LR munition. In total, 3698 units of these weapons were produced, and they were quite actively used for training machine-gun crews. 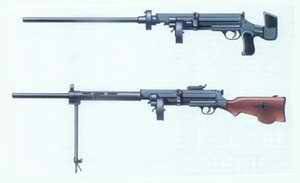 Well, in the end we will try to figure out what exactly can teach such a sample of weapons and how much benefit from it. Given the fact that the design of the weapon is completely different from the design of a full-fledged machine gun, such a model can not give a normal training on maintenance and eliminate delays when shooting, and this is no less important than the ability to accurately hit the enemy. Due to the completely different characteristics of the ammunition, with such a machine gun a person will not know the real capabilities of his weapon, he will not fully be able to use aiming devices even at medium distances using weapons, not to mention long-range weapons. Of course, this can be quickly learned in the process, when you squeeze and learn to breathe under water, there is no dispute, but the time for which someone could die from his comrades is back, and perhaps the machine gunner himself, without understanding how to shoot at greater distances than those for which he was taught to shoot. Separately, a very interesting moment is noted, which says that thanks to the Blum machine gun, it is possible not only to reduce the cost of ammunition, but also to reduce the landfill area. Brilliant thought. Perhaps the only thing that a given machine gun can teach is to take breaks in shooting, and even then, for those who cannot do this and for whom the only signal that a shot is enough is a kick to a known place, this sample weapon is not suitable, since I strongly I doubt that something negative can happen with a machine gun even if you land a long line at all 39 cartridges. I am already silent about the actual lack of recoil when shooting and stuff.

Thus, it is not at all difficult to conclude that from such weapons there is more harm than good. If we take into account the fact that such a machine gun will be used purely to obtain the initial skills of shooting from such a weapon, then as a result, a person will have to relearn when a full-fledged sample falls into his hands. Such a machine gun would be useful somewhere in school, for firing on pre-draft training lessons or something like that, if it still exists, but in the military environment, it seems to me, such a weapon does not belong.