16 May 2013
21
So the sounds of holiday marches sounded, salutes died down across the country in honor of the Victory Day celebrations, and words of congratulations were spoken ... And I would like to return to those few days when many beautiful, sincere and cordial words were spoken in a fit of gratitude to the veterans. But even more I would like to return to a number of comments that were heard during these several days of May at various Internet forums, including the VO forum. 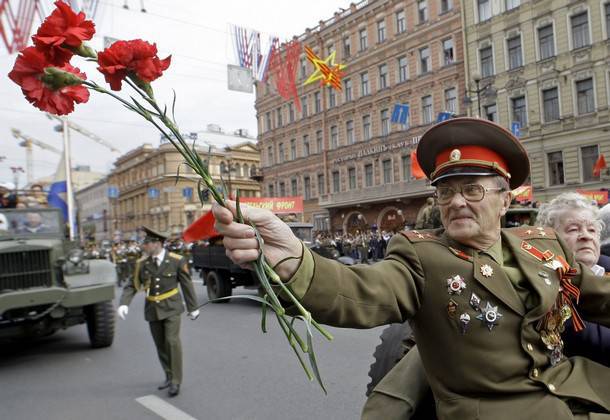 What kind of comments I say, colleagues? Those in which many reminded us all that the memory of the heroism of our fighting "old men" in the years of the Great Patriotic War should not be limited to laudatory speeches and the distribution of carnations during these long May days, although this is very necessary. I will cite some of them, although believe me, there were very, very many comments with similar content, which is encouraging.

Egoza
Quote: pinecone
Mention General Karbysheva next to all this bastard should not be.
I fully support! And I want to ask. Maybe you can make a letter about the indignation of such blasphemy on behalf of the entire VO website? I'm sure everyone will subscribe, and send this letter to all the newspapers. (In court, probably not) Well, at least in the media! As for Urgant, who also “blurted out” how much noise there was. So here it is necessary, because it is exactly KOSHUNSTVO! And make these forks publicly apologize.

Tverichanka
Maybe you can make a letter about the indignation of such blasphemy on behalf of the entire VO website? I'm sure everyone will subscribe, and send it.
Yesterday, on the 9 branch in May, I made such an initiative — collect a hundred thousand signatures on our website and send them to the Duma to pass the law on protecting the memory of WWII. Because the law on protecting the feelings of believers was passed, why not adopt such a law .

Very noteworthy and truly sincere, heartfelt, thoughts and sentences that have received concrete outlines. I remember the hot discussions on the site of some feature films, whose artistic images ambiguously interpreted the events and deeds of those ruthless military years. We all remember how the initiative, which was born in the Internet community, to ban the broadcast of the film on NTV, where many Soviet soldiers were presented as a herd of malicious, unprincipled and anarchic-minded rapists, received the broadest support and forced the NTV leadership to cancel this provocative show. And this is great! After all, this is a confirmation that the popular initiative can be heard at the highest levels of power, supported and embodied in reality. It’s hard for us to judge how this whole mechanism of banning the showing of this film (and we don’t need it especially) unwound, the fact itself is important, confirming that if you want, with broad support, you can solve the most resonant issues and seek understanding with the authorities and with the people clothed with this power. It is important that these initiatives find the widest response in the hearts and minds of as many people as possible. And it is equally important that these are constructive proposals aimed at improving the quality of our lives, not only materially, but also (even more!) In the spiritual. Let's leave the debate about what is being done for veterans and whether it is enough for another conversation. Fortunately, topics on this issue are tossed with enviable regularity. I write this detailed comment firstly - fulfilling the request of Nina (Tverichanka), which simply needs to be supported with her proposal, and secondly, through this initiative to encourage the site administration to repeat the already tested method of conveying people's opinions to our authorities and lawmakers. Moreover, Tverichanka gave an excellent, almost exhaustive, guideline to which the legislators' efforts in this matter should be directed: to adopt a law to protect the memory of the Second World War.

If this proposal is not new, and we simply do not know about its embodied presence in our laws - this is one question. I think there will be a person among us who will tell us where and what is said in this law. If there is no such law in any paragraph, not a single law, then I think it would be quite appropriate to ask this question to the authorities and make joint efforts for the appearance of such a law.

I think this is very important in order to prevent provocative statements and handicrafts from appearing in our media and in general in our lives. Precedents in the world - is. After all, there is a law on the Holocaust! There is even a measure of responsibility for denying the Holocaust itself, as a phenomenon! Yes, and the Baltic statutory parrots introduced into law enforcement practice the responsibility for denying the Soviet occupation! What prevents us in such a good deed, as the protection of the honest name of those who fell in WWII, to put into practice the punishment for sneering at the memory of the defenders of our country from fascism? NOTHING! This is a tribute to the imperishable memory of the Victory in the most monstrous of the wars that have passed through the planet. This will be one of our efforts to cultivate a spiritually healthy generation of our followers and descendants, whose faces I saw on the fireworks on Victory Day. These faces were illuminated not only by the lights of the salute, but also by the light of admiration and pride coming from the depths of the young hearts ...
Sincerely, Esaul.

Ctrl Enter
Noticed a mistake Highlight text and press. Ctrl + Enter
We are
A great interview with Sergey Lavrov: about Ukraine, Obama and IranWhat you didn't want to know about England
21 comment
Information
Dear reader, to leave comments on the publication, you must to register.