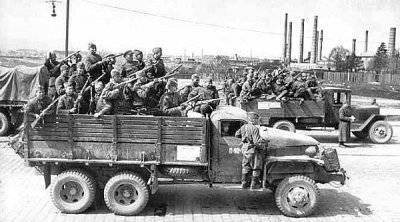 If we talk about the most massive truck that was delivered to the Soviet Union during the Great Patriotic War, then this is, of course, the famous American Studebaker US6. More precisely, this car was generally the absolute leader among all types of military equipment, which, according to Lend-Lease, came to the USSR during the Second World War. This is a three-axle machine that had two wheel formula options: 6X6 or 6X4. Of the nearly 197 thousands produced by Studebaker US6, more than 100 thousands ended up in the Soviet Union. Of these, more than half were either destroyed during the war or seriously damaged. However, even after the war, it was these American-made trucks that went on the roads of the USSR for quite a long time.

Returning to the Studebaker US6, it is worth noting that it significantly exceeded the trucks that were produced at that time in the Soviet Union. Its lifting capacity reached almost 2,5 tons with a dead weight of about 4500 kg. Used for the movement of gasoline fuel. In this case, the flow rate at a speed of about 50 km / h reached 39-40 liters per hundred kilometers.

An interesting fact that indicates that the Studebaker US6 was not exploited by the American army itself. The reason here is not at all that the Americans considered this truck worse than the analogs produced by other companies. The true reason is not the coincidence of the parameters of the car engine under the standards that existed at that time.

One of the most famous variations of using Studebaker US6 is the Katyusha rocket launcher. Including from this American car rockets were launched that effectively hit the enemy at a great distance. In addition to the Studebaker US6 rocket launchers were placed on Soviet cars: for example, on the BM-13. Monument "Katyusha" on the chassis Studebaker US6 can be seen in the museum on Poklonnaya Hill in the Russian capital.
Ctrl Enter
Noticed oshЫbku Highlight text and press. Ctrl + Enter
We are
Veteran carsWorkers front roads
Military Reviewin Yandex News
Military Reviewin Google News
10 comments
Information
Dear reader, to leave comments on the publication, you must to register.