Is Tajikistan a new Chinese province? 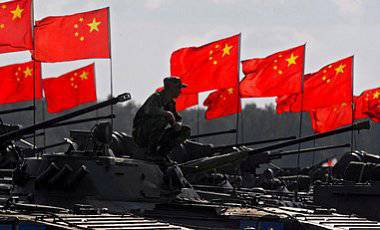 В “Arguments and Facts” from 13 of May of this year Victoria Nikitina fuels: “Since 6 in May, China has been deploying troops into the territory of Tajikistan. A part of the Gorno-Badashkhan Autonomous Region of this state is given to China for debts. In Dushanbe, they believe that it is uninhabitable. However, China refers to this territory differently, reasonably considering it important from a strategic point of view. ” The head of the Center for Political Studies of the Institute of Economics of the RAS, Boris Shmelev, who was not in the slightest doubt about the information about the deployment of Chinese troops to Tajikistan, was involved as an expert on frying facts and peeling arguments.


According to this authoritative specialist, this case in international relations is related to the “special”, even to the events-symbols. China strengthens its position in the world, turning economic power into political influence.

And a failed state like Tajikistan, in the person of the president, is forced to flirt with China: after all, it gives the money needed for the elections. But, the analyst wonders, what will lead the troops? How to be here in Russia?

The scientist advises the native government to accept the accomplished fact as a fact and take this very fact into account in the foreign policy strategy. How to take into account? Russia should play an important role in Central Asia and allocate significant funds to support its states. If she does not do this, then others will do it - the same China.

“As for the fact of the sale of land for debts, I will say this: each country is sovereign, and therefore it may look for forms of debt repayment convenient for it ...”

Well, what is there to think for a long time, let's add a joke from myself. The President of Tajikistan can sell Tajikistan to the Chinese - and the whole is short. Why does he need him? All Tajiks have been working in Russia for a long time. So the “repayment form” is very convenient.

Pavel Khrennikov ("MK") explains where the Tajik-Chinese "duck" came from.

At the beginning of May, a message appeared in the online edition of Forum.msk, which was reprinted by several Russian media. The sources of the “Forum” note were, of course, unnamed, and they supposedly originated from the “Tajik opposition”. The online publication reported that Chinese troops seized the eastern Pamirs in the Murghab district of Tajikistan and took control of the only highway in the region. The publication also informed that Tajikistan, over the years of independence, has transferred 1,5 thousands of square kilometers of disputed territories to China, the total area of ​​which is 28,5 thousand square meters. km It was also claimed that at the beginning of the year, Dushanbe was preparing to transfer part of the Pamir highlands, which is rich in deposits of precious stones, rare minerals and uranium, to repay foreign debt to Beijing.

The chief editor of the Forum, Anatoly Baranov, said:

“No one knows exactly what the volume of uranium deposits in Badakhshan is, but it is known that there is uranium there. In addition, there are many deposits of strategic raw materials, including tungsten and rare earth metals. It is true that for the life of Murghab, where even in summer there is snow, it is of little use. But this is an important strategic point - Murgab lies on the Pamir tract, so the PRC will control the only transport artery in the Pamirs. In general, Tajikistan is the buckle of a soldier’s belt with which Russia holds Central Asia, and the surrender of positions in Tajikistan is the surrender of the entire region, to Orenburg and Astrakhan. Although, when the Russian frontier troops left the Tajik-Afghan border by Putin’s decision, it was already clear that Russia was leaving the East, and someone would definitely come to its place. China has made an application, by the time of the withdrawal of troops from Afghanistan, I suppose, the United States and Great Britain will make their move. Iran and Pakistan are interested. It resembles the sharing of the junk of a deceased, to whom the boots, to whom the pea jacket ... "

The correspondent of "MK" notes that the information did not find any official confirmation from either the Tajik or the Chinese side, and experts suggested that the message might have been Moscow’s attempt to pressure Dushanbe.

(Those interested can read the note "Forum" in original).

Igor Rotar (Rosbalt) recalls that the horror stories about the Chinese offensive in Central Asia excite the Russian media sphere for several years, and now it has come to reports of the "occupation of the Pamirs by China." It came to the appearance of maps, allegedly issued in the Middle Kingdom, on which China owns the whole of Central Asia and a significant part of Russia.

Since in Dushanbe news they simply did not see about the “occupation”, the correspondent of “Rosbalt” had to communicate through the social network “Odnoklassniki” with the inhabitants of Murghab. In response, he received several replies that “no Chinese” were “noticed” there.

Later, on May 7, the "news" about the Chinese invasion clarified the Kyrgyz portal Vesti.kg. The head of the Kyrgyz Border Service, Tokon Mamytov, told reporters that reports of the introduction of Chinese troops into Tajikistan are no more than a “duck”. Mr Mamytov stated:

“I was only on the phone this morning with the First Deputy Chairman of the State Committee for National Security of the Republic of Tajikistan, the head of the Main Directorate of the Border Troops of Tajikistan Mirzo Sherali, and he said that their situation is stable. Moreover, to say that China occupied the Murghab district means, at best, not to understand the processes taking place in Central Asia. Both Dushanbe and Beijing are SCO members who have signed a series of documents on the observance of territorial integrity within this organization. Naturally, the information that a friendly state suddenly all of a sudden almost occupied the lands of its neighbor is erroneous. ”

A columnist for the Tajik media holding Asia Plus, Khairullo Mirsaidov, told Rosbalt that the rumor about Chinese expansion "has been launched by Russia, and it is inflating it itself." The aim of the Moscow "duck" is the return by Russia of "its border guards to our border."

By a strange coincidence, the correspondent notes that on May 8, the Russian president had just signed the laws on ratification of agreements on the conditions of stay of Russian military bases in Kyrgyzstan and Tajikistan.

Returning to the “occupied” by China territories of Tajikistan, we need to add this.

Another 15 of April, i.e. more than three weeks before the introduction of Chinese expansion, on IA "REGNUM" A note appeared with reference to the Tajik resource Asia Plus mentioned above.

China received more Tajik territory than Dushanbe was transferred to it, said the chairman of the National Social Democratic Party of Tajikistan Rahmatillo Zoyirov. As reported on the Iranian radio site Sadoi Khuroson, Rakhmatillo Zoyirov does not exclude that in exchange for debts to China, Tajikistan may give up another part of the territory of the Murghab district. Chinese border guards penetrated 20 km deeper into the territory of Tajikistan than was previously negotiated. An Iranian radio station quotes Zoyirov:

“I personally traveled to the Murgab district and saw that Chinese border guards at certain sites established their borders 20 km deep into Tajik territory, although Tajikistan and China agreed to transfer only 1,1 thousand square kilometers of the territory of Murgab district”.

Mr. Zoyirov believes that the transfer of military forces and equipment to the Gorno-Badakhshan Autonomous Region under the pretext of conducting anti-terrorist exercises there is connected with the discussion of the transfer of part of the land of the Murghab region to China and the debts of Dushanbe.

However, official representatives of the Ministry of Defense of Tajikistan deny these rumors.

IA "REGNUM" reminds that Tajikistan approved the transfer of part of the territory of the People's Republic of China in January of 2011, when the parliament of the republic ratified the protocol on demarcation of the border with China, according to which China’s 1,1 thousand square meters. km of disputed territories. The official land transfer ceremony took place in the autumn of the same year. The area of ​​China grew by 1158 square kilometers, and the territory of Tajikistan decreased by 1%.

Eduard Limonov in the "preaching" from 14 May in his LJ wrote that what is happening in Gorno-Badakhshan is “hardly accessible to observers,” since there “there is not Pushkin Square”, but “mountains, and how dense!”

If Tajikistan transferred the territory in 1,5 to thousands of square kilometers to China to repay the government debt, then Limonov believes that Tajikistan will keep information about this secret, because the “distribution of pieces” of native land will have a bad effect on the morality of the Tajiks.

And what about the Chinese? Why are these silent?

And Limonov writes that it’s also unprofitable to spread such information: they “prefer to swallow territories silently”.

“And the fact that the Chinese are masters of moving the border deep into foreign territories is widely known. The fact that they got up on Amur near the island of Tarabarov when they changed the channel of Amur (flooded barges and brought sand, because the border goes along the fairway under the contract) to chop off pieces of our territory, it is widely known. Few people know that there is now the border with China is on the city beach of Khabarovsk. By golly, it is! ”

“I reproach, and I will reproach compatriots with political levity and political dementia.

They briskly enter into hysterical disputes about things absolutely unimportant, especially Moscow ones, and ignore serious and terrible problems.

According to Limonov, China already blocks the rivers (for example, the Black Irtysh) and “steals four fifths of its water intake”. Now, having cut off the Pamirs, he will control the sources of the great rivers.

And now let's tear ourselves away from Comrade Limonov's prose and check how the Russian military feels in Tajikistan: do they notice the nearby Chinese hordes encroaching on Tajik uranium and other attractive territories, and where the borders are shifted. In essence, the military is the most reliable source of what is happening in the republic.

13 May correspondent ITAR-TASS Vitaly Khalevin He conveyed that the units and formations of the 201 of the Russian military base stationed in Tajikistan are serving in the normal mode.

This was reported to the correspondent by the spokesperson of the Central Military District, Yaroslav Roshchupkin. “The Russian 201 military base deployed in Tajikistan is operating normally,” said Comrade Roshchupkin.

Russian servicemen do not observe Chinese troops on the territory of Tajikistan.

Observed and commented on Oleg Chuvakin
- especially for topwar.ru
Ctrl Enter
Noticed oshЫbku Highlight text and press. Ctrl + Enter
We are
The background of events in the Gorno-Badakhshan Autonomous Region of TajikistanWhy Uzbeks and Tajiks do not take the world
Military Reviewin Yandex News
Military Reviewin Google News
69 comments
Information
Dear reader, to leave comments on the publication, you must to register.