The US and Turkey is craving 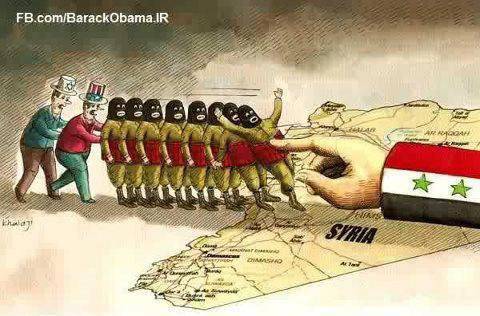 The American “hawks of war” are already craving new blood. As soon as the topic about the alleged use of the Syrian army’s chemical weapons (without evidence, as previously in Iraq) - immediately there were those who voiced the desire to immediately unleash a bloodbath in the Middle East.


One of the advocates of the war is, of course, the very same John McCain, known as the instigator of many aggressions already, as the immediate perpetrator of the genocide of the Vietnamese people, who sprayed American chemical weapons over Vietnamese children. Now he hypocritically calls for the "protection" of the Syrian people from chemical weapons, establishing a no-fly zone over Syria - that is, simply bombing the country, like Libya.

Another congressman, Keith Ellison, said frankly: "I believe that the strongest superpower in the world, the United States, cannot stand aside and remain inactive." Of course, so far without the United States in solving other people's problems! Similarly, Hitler stated that he must resolve the issue of the Jewish population.

Allison added: “The problem has spilled over the borders of Syria, and Syrian refugees are in Jordan and Lebanon, there are also displaced persons inside Syria itself.” This is a speculation of the suffering of people who have lost everything. The congressman forgets about who caused these refugees. He wants more people to make refugees by destroying their homes with tomahawks and cruise missiles.

All these "fighters for the rights of the Syrian people" pretend that they do not want to see the reasons for what is happening. Speaking of beautiful words about “helping the Syrian people,” the congressmen presented a bill authorizing the supply of weapons to terrorists. The initiator of this project was the chairman of the Senate Foreign Affairs Committee, Robert Menendez. It is called the “Stabilization Act in Syria”. It was impossible to come up with a more cynical name, since nowhere in the world did the support of terrorists contribute to stabilization.

“A severe humanitarian crisis is unfolding in Syria and around it, and the US should help to tip the balance to the opposition groups in Syria,” he said.

It turns out that without the US, these “opposition groups” will never win. But what about the "people's revolution"? The price of such a pseudo-revolution is a crumpled dollar!

The same bill provides for “the imposition of sanctions against persons convicted in the sale of weapons and military equipment, as well as in the supply of petroleum products to Bashar Asad.” This is already a direct threat to the countries-allies of Syria - the true friends of a bleeding country, whose noble activities prevent the warmongers.

Against the backdrop of passions boiling in Congress, US Secretary of State John Kerry went to Moscow. He apparently hoped with the help of the "carrot and stick" to incline Russia to abandon the support of an ally. But all he could agree on was the organization of a joint international conference on Syria.

In this regard, it is worth recalling that a similar conference has already taken place in Geneva on June 30 2012. It adopted a communiqué on the inadmissibility of foreign intervention in Syrian affairs and that a way out of the crisis is the business of the Syrians themselves. But as soon as the United States saw obstacles in its bloody activities in the Geneva communique, they trampled the document as an unnecessary piece of paper and continued external interference by sending so-called “non-lethal” funds to terrorists, while simultaneously discussing support for bandits in the form of heavy weapons.

Where is at least some guarantee that a decision will be made at a new conference that the States will not trample?

Almost immediately after Kerry’s visit, British Prime Minister David Cameron flew to Russia. He also tried to persuade Russia to betray Syria. He said a bunch of big words, like: "History Syria is written with the blood of its people. "

I want to remind Cameron that this can be said about any other country, including England. But then we can safely say that the history of imperialist countries, such as the USA, Great Britain and others, is written in the blood of the peoples oppressed by them. This can not be said about the bombed Yugoslavia, Iraq, Afghanistan, Libya, about the same Syria. But this is true of such colonial powers as Cameron’s birthplace.
At the same time, another NATO country, Turkey, attempted to prepare a new anti-Syrian provocation. In the Turkish city of Reykhanly, two explosions thundered, as a result of which 46 people died.

Without conducting any investigation, Turkish Prime Minister Erdogan laid the blame ... on the Syrians. And not on those traitors of the Syrian people, whom he generously supplies with arms, money and explosives, but on official Damascus. Damascus, which itself suffers from similar attacks.
Erdogan has never expressed regret that Syrians are dying in the terrorist acts committed by his outcasts. But he likes to talk about “unhappy Syrian children with nipples in their mouths” (he said so), allegedly suffering from the “regime”. He denies the legitimate authority of the SAR the right to defend his country from terror and gives out thugs with a weapon to "children with nipples"

As soon as the attack occurred on its territory, the Turkish Prime Minister immediately began talking about the fight against terrorism. And once again called for external intervention in Syrian affairs.

There are two points to note. First, if you feed and pamper the monster for a long time, then it will sooner or later get out of control and go against its breadwinner, if only it feels that they give it little food. Apparently, the so-called “Syrian opposition” is unhappy that Erdogan gives, though much, but not as much as the militants would like.

Secondly - it would not have been better for Erdogan, than to send his intelligence officers to help the so-called “Syrian opposition” - order them to better monitor the security of their own country?

Ctrl Enter
Noticed a mistake Highlight text and press. Ctrl + Enter
We are
Results of the week. “You see, every year my friends and I go to the bathhouse. This is our tradition. ”Geopolitical mosaic: McCain decided to write to Pravda newspaper, and Kerry drew information about Syria from a fake expert
46 comments
Information
Dear reader, to leave comments on the publication, you must to register.