Intelligence balloons in service with the US Army

14 May 2013
21
29 on May 2012, Lockheed Martin completed the delivery of PTDS (Persistent Threat Detection System) balloons under the latest contract for the 29 group of the US Army. Since the start of this program (2004 year), the company has supplied 66-like systems to the US military in order to provide American soldiers in Iraq and Afghanistan with round-the-clock surveillance. PTDS are tethered balloons that are equipped with sets of various sensors. These balloons can be airborne for up to several weeks or even a month, providing the military with cost-effective observation and reconnaissance capabilities. These balloons are attached to mobile mooring systems using high-strength cables and are able to carry a set of payloads to carry out several missions at once.


According to the representative of the company Lockheed Martin Collin Arthur, the use of PTDS balloons can improve the safety of military personnel. Situational awareness of troops in real time helps identify improvised explosive devices, other threats, as well as the movement of the enemy. Aerostats PTDS are produced in several versions and can be used around the clock for reconnaissance, all-round observation, early warning radar, and signal relay.

Already after several months after the creation of the balloon, Lockheed Martin delivered the first model to the troops, which was used during the operation of Iraqi Freedom. PTDS almost immediately became quite an important factor in ensuring the safety of American bases and in 2006, the military ordered a new batch of balloons. The capabilities of this system were proven during Operation Enduring Freedom in Afghanistan and Iraqi Freedom in Iraq. As the demand for these systems increased, Lockheed Martin increased its own production capacity. The assembly of balloons is conducted in the city of Akron in Ohio.

Balloon reconnaissance and sentinel complexes (ARDK) of the new generation were included in the combat units of the coalition forces, along with other means of ensuring security. According to American military experts, the use of ARDK has reduced combat losses, as well as increased the effectiveness of advanced troops. At the same time, in the 2012 year (compared to the 2011 year), the supply of balloons to the troops increased. In Afghanistan, Pakistan and Iraq, where dozens of aeronautical observation complexes of the PTDS type (shell volume more than 2100 m3) are already used, also deliver less effective reduced ground observation systems PGSS - Persistent Ground Surveillance Systems.

Modern balloon systems PTDS and PGSS are equipped with sound and optoelectronic intelligence, as well as various communication repeaters. Balloons are able to conduct round-the-clock observation of the terrain in all conditions for a distance of 20 km. They allow you to easily determine the position of the shooting enemy.

Currently, the US military is also using the REAP system - Rapidly Elevation Aerostat Platform, which is a joint development of the companies "Lockheed-Martin" and "ILS Dover". This system is characterized by the possibility of operational (no more than 5 minutes) deployment. This system includes: tethered aerostat (volume 73,62 м3, length 14,84 meter, lifting height up to 100 meters, payload mass up to 16 kg) with onboard optoelectronic surveillance systems: night and day video cameras 1LS Mkl; IR 250 infrared reconnaissance equipment from Reyteon (from a height of 100 meters it can detect a target at a distance of 35 km); as well as ground equipment, which is installed on the Humvee. 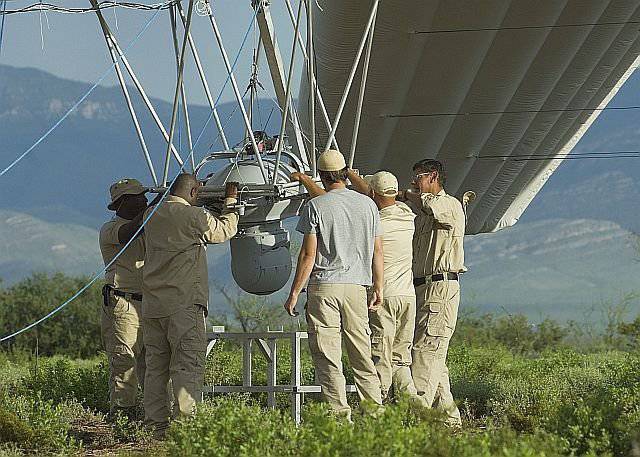 In addition to the above systems, the US Air Force deployed in Afghanistan a radar observation system TARS - Tethered Aerostat Radar System, developed by ILS Dover. The basis of this aerostat system is an attached aerostat (volume - 11 900 м3, length - 63 meter, lifting height to 4 500 meters, payload mass - to 550 kg). The balloon is installed on-board radar AN / TPS-78.

In 2009, the command of the US military has set an industry mission to create a cheaper security system for army units operating in front-line areas and areas in which there is an increased level of threat of terrorist activity. In the first half of 2010, in Arizona, at the Hume test site, before sending to the theaters of war, the first sample of the PGSS complex was tested (700 shell volume m3, filled with helium). The balloon is able to operate at altitudes up to 600 meters and carry a payload weighing up to 70 kg. According to the statements of the military, this program was created not to compete with the PTDS project, but to supplement it in order to optimize the size of the aircraft, as well as reduce their cost.

The balloon complex includes the 4 main components: a helium balloon envelope, which is designed for continuous operation even in adverse weather conditions; cable-tross, which provides the balloon with a fixed position of the device and reliable and safe communication with the dispatcher on the ground; mooring system, which is installed on the car chassis and equipment for the implementation of round-the-clock surveillance. 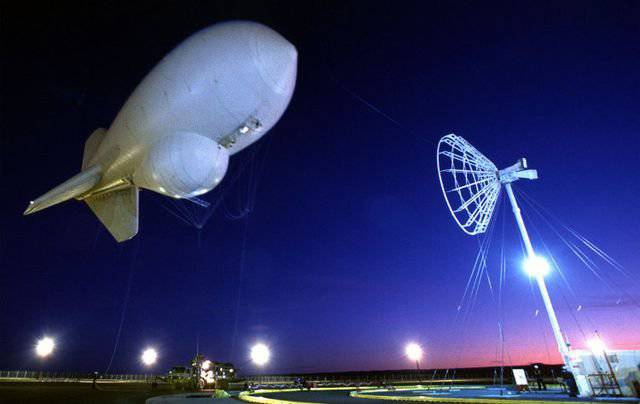 PGSS balloons in addition to the implementation of round-the-clock video monitoring of the surrounding area are able to scan the space for the presence of electromagnetic and infrared radiation, as well as all sorts of acoustic manifestations. Thus, the balloon can collect sufficiently complete intelligence information, on the basis of which reconnaissance of the area is carried out and tactics of further actions in different conditions of the situation are calculated.

If we talk about the vitality of this complex, then experts believe that outside the survey area of ​​the PGSS the use of small weapons it is inefficient to put the balloon out of action, and if it is located in the zone controlled by the balloon, any actions dangerous for it can be stopped by the deported security team. Any shot of the alleged terrorist will be immediately recorded and will lead to countermeasures in response. In addition, even if the balloon is broken through, it will not fall to the ground so quickly, together with the payload it will simply fall to the ground. 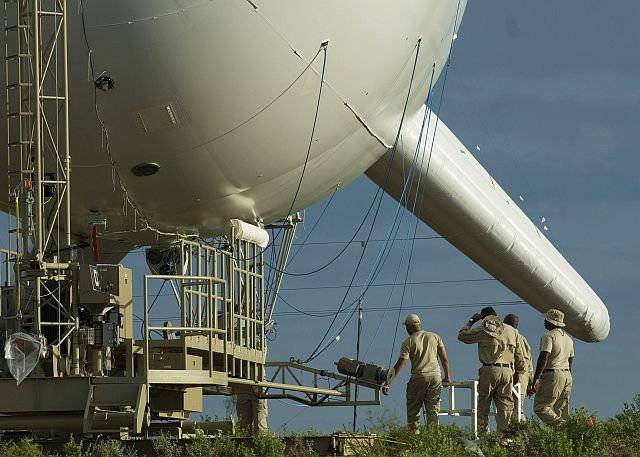 At present, according to the existing bilateral agreements between Romania and the United States, a training center for training in the use and maintenance of American PGSS balloon balloons was opened in Romania in 2012. The training center was deployed in the territory of the reconnaissance brigade of the Armed Forces of Romania in the city of Buzau. Along with the American and Romanian military, it provides for the possibility of training military personnel from other NATO countries. The teaching positions in the center are occupied by American specialists. The course of study consists of training and obtaining skills in filling balloons with helium, lifting and mooring the apparatus, controlling the winch, as well as the procedure for assessing the situation on the basis of data obtained from the balloon. The term of training of specialists is 6 months, the calculation for servicing 1 aerostat consists of 5 people.

All costs of creating this training center and equipping it with the necessary material and technical means, including the existing models of ARDK, were assumed by the American side. The costs associated with the current activities of the center will be covered by the financial resources allocated each year by the Washington Ministry of Defense of Romania in the form of financial assistance.

The Romanian Ministry of Defense, as part of maintaining its participation in the ISAF (International Security Assistance Force) operation in Afghanistan, sent additional intelligence units from the national armed forces to the country. In August 2011 of the year, the calculation of ARDK PGSS as part of 10 servicemen was transferred to Afghan territory. This unit was formed from the military intelligence brigade (Buzau) of the military intelligence headquarters of the Romanian armed forces, which received special training in the United States. The equipment, which is currently in service with this unit, was transferred by the American army to the Romanian side for the period of its participation in joint military operations with the US Army in Afghanistan. 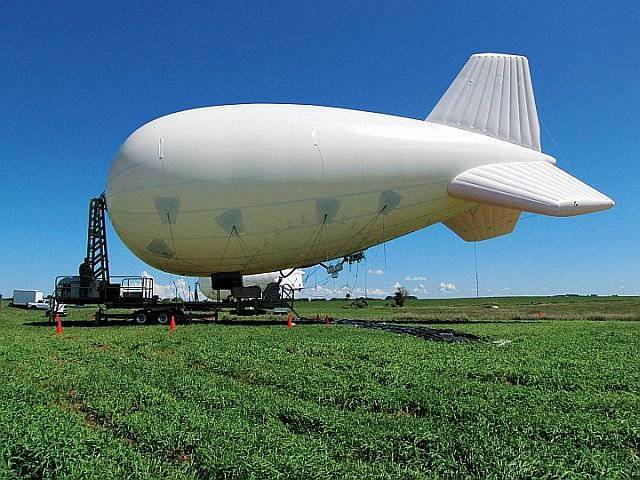 The main efforts of the Romanian PGSS-armed unit are focused on obtaining intelligence data to ensure successful operations of the mixed Romanian-American brigade, which performs its tasks in the territory of Zabol province. In addition, this unit is also used to solve other reconnaissance tasks on the territory of Afghanistan that are located in the zone of responsibility of the command of the coalition forces of the South. The permanent location of the unit is the base of the coalition forces in the village of Kalat (Zabol province).

Today, the basis of onboard equipment of reconnaissance balloons is made up of reconnaissance and surveillance systems, which can be placed on the external sling (frame or cable type). Modern radars, various optoelectronic equipment, equipment for combat command and communication teams, as well as various acoustic sensors can be installed on board balloons. At the same time, the ARDK ground complex includes: mooring equipment universal for carriers, which allows for circular receiving of aerostat in azimuth depending on wind direction with a descent mechanism (automatic winch) and lifting, power supply system, as well as a control point in container design .

The main advantage of the use of balloons over unmanned and manned reconnaissance aircraft military experts recognize: a very long flight duration (from several days to a month); relatively low cost of operation and maintenance, due to the absence of engines on the balloons, and hence the cost of fuel and the development of the resource; reduced (no more 6 people) calculation; high combat survivability and noise immunity of data transmission lines, as well as versatility of use with one major drawback - a relatively small viewing area, which is caused by the stationary placement of the balloon.

Ctrl Enter
Noticed a mistake Highlight text and press. Ctrl + Enter
We are
From the point of view of the airshipAn-12 in Afghanistan
21 comment
Information
Dear reader, to leave comments on the publication, you must to register.