New stage of tests of the anti-missile complex ADAM

17 May 2013
9
In recent years, tactical anti-missile systems have gained special priority. Especially vividly it manifests itself in Israeli developments. This country is regularly subjected to rocket attacks from the territory of neighboring Arab states and therefore is engaged in the creation of appropriate systems. The Israeli army is already armed with several special anti-missile systems, but they all have a characteristic drawback. Most often, they have to shoot down cheap hand-made unguided Qassam rockets. The economic feasibility of intercepting such missiles is determined only by the amount of damage that was prevented. However, each launch of the anti-missile system still costs several thousand dollars. 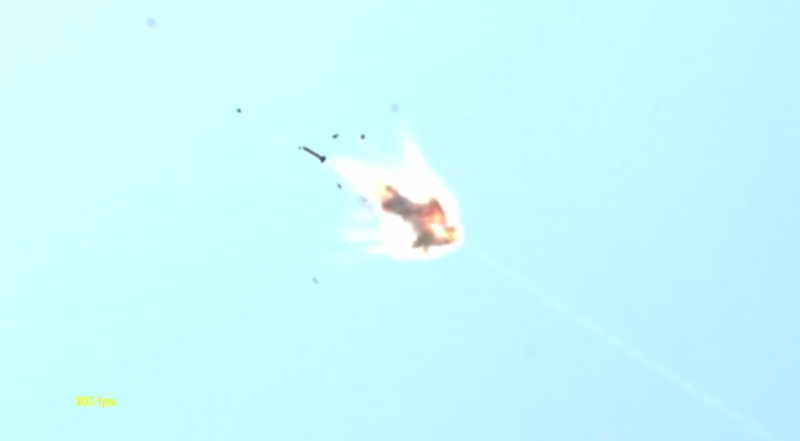 Even at the stage of creating Israeli anti-missile systems, it became clear that it was necessary to develop a certain complex with a less expensive means of destruction. In accordance with this concept, Lockheed Martin, at the beginning of 2000, began research on the program, which is now called ADAM (Area Defense Anti-Munitions - “Defense of the area from ammunition”). To date, the ADAM complex is being tested. A few days ago, the company-developer announced the completion of their next stage. In the course of regular test interceptions, the laser missile defense system destroyed eight unguided rockets, similar to the Qassam.

It should be noted that the last tests, which took place in March and April, were not the first. Last fall, the ADAM system already destroyed 11 special targets that mimic unguided missiles. However, Lockheed Martin did not publish data on the total number of targets launched and, as a result, on the percentage of missiles hit. This fact may be a reason for criticism, although the recent achievements of the ADAM program seem more positive than the other way around. The fact is that before the last stage of testing at the moment, Lockheed-Martin employees began fine-tuning of some systems, which eventually made it difficult to test the tasks for the complex.

Recall, during last year's tests, the ADAM laser complex “fired” at a reactive target moving along a tensioned wire. During these launches and training interceptions, the capabilities of the complex for tracking an already captured target were tested. In addition, last year's tests showed the potential of the complex for the destruction of moving targets: it took only a few seconds to burn through the target case and to undermine its warhead. 11 destroyed targets considered sufficient argument in favor of the continuation of the work and refinement of guidance systems.

The March and April test “firing” differed from last year’s in that the unguided target rockets flew freely, without any guides, as Qassam missiles or the like do. In eight cases, the systems of the ADAM complex successfully detected the training target, escorted it, guided the laser and burned the hull. According to an official press release, during the second stage of testing, the missiles were destroyed at a distance of about one and a half kilometers from the laser complex. In addition, at a smaller distance (about 1200 meters), it was possible to destroy a target that imitated a light unmanned aerial vehicle. At the end of the new tests, the ADAM complex was sent back to fine-tuning. 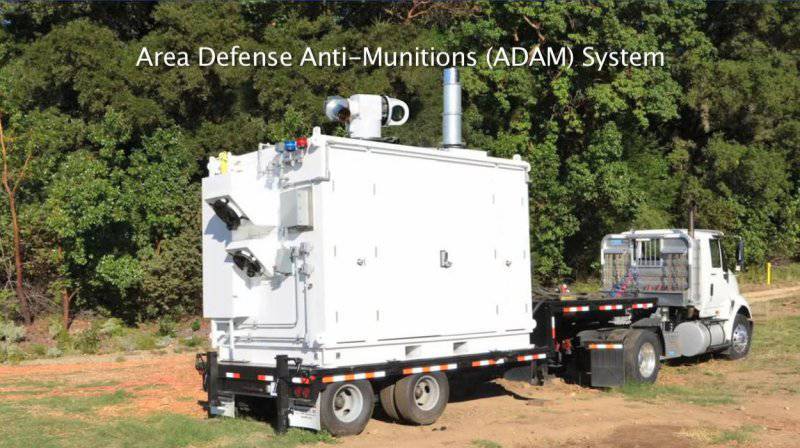 At the moment, the ADAM laser complex is a special container on a car trailer, equipped with all the necessary equipment. The complex includes thermal imaging systems, target detection, ballistic computer, control system, as well as laser equipment. The target is hit using a fiber laser with a power of about 10 kilowatts. The equipment of the complex can find enemy missiles and drones at a distance of about five kilometers, after which a laser beam is guided. Destruction of the detected target occurs at a distance of about two kilometers. It is worth noting that the short range of the complex is compensated by the speed of destruction of targets like unguided short-range missiles.

Despite the ongoing refinement, the ADAM complex is already being “sharpened” for practical use and sale to potential buyers. So, Lockheed Martin employees note that it widely uses commercial components that are available for procurement without additional difficulties. In addition, the placement of all systems in one container now provides the complex with high mobility and flexibility of use. Also, the possibility of external targeting is currently being worked out. In this case, the ADAM system should receive information about detected targets from third-party sources, for example, from radar stations.

The official press release claims that the operation of the ADAM complex will be much cheaper than interception using similar rocket systems. The main reason for this savings - the laser. It does not require any ammunition and consumes only electricity. Thus, for the destruction of enemy ammunition or unmanned aerial vehicle will have to spend only the electricity and fuel necessary for its development. It is obvious that such consumables will be an order of magnitude cheaper than special guided missiles, and the complex’s “ammunition load” will be limited only to the capabilities of the generator supplying it with electricity.

However, even with the widespread use of available components, serial ADAM will not be cheap. The price of the anti-missile complex will be primarily affected by the use of the original combat system - a fiber laser of sufficiently high power. The complexity of such equipment can offset all the benefits from the use of serial electronic components and other equipment. As a result, according to various estimates, the cost of one ADAM container will be approximately equal to the price of a short-range anti-aircraft missile system or even exceed it.

The price ratio of the laser anti-missile system and other anti-aircraft missile systems, under a certain set of circumstances, may adversely affect the export prospects of the first. This is probably why Lockheed Martin representatives are now working to improve the characteristics of ADAM. In particular, in the future, this complex can “teach” to intercept artillery shells and mortar shells, as well as work on ground targets. While the development company is working on intercepting only missiles and UAVs, but in the future it is possible to replenish the list of objects being destroyed and, as a result, expanding the potential applications of the complex.

So far, the ADAM anti-missile laser complex has passed only two stages of testing. This is not enough to start mass production, but the information collected will allow you to complete the refinement and begin preparing for future sales. At present, it is only possible to assess the capabilities of the serial complex, considering the information currently available. Probably in the future, Lockheed Martin will be able to improve the characteristics of its development and interest potential buyers. However, to date, the combination of tactical characteristics of the ADAM complex in combination with its purpose does not allow us to speak of any widespread use in the future.

The detection range of the target with its own means, not exceeding five kilometers, can theoretically be increased by using an additional radar station. As for the damage radius, it can grow exclusively with the help of increasing the laser power and the corresponding refinement of other systems. Based on the current state of the ADAM project, it can be assumed that a noticeable increase in its capabilities should not be expected in the next few years. Thus, until a certain time, ADAM will attract potential buyers only by relatively cheap exploitation.

Also worth noting is the specific tactical niche and the following export prospects of the complex. Now only one country in the world - Israel - is regularly subjected to attacks from short-range unguided rockets, including those made in artisanal conditions. However, it already has several proprietary systems of the same purpose as ADAM. At the same time, all of the available anti-missile systems of Israel, such as Kipat Barzel (Iron Dome) or Kela David (Prast David), despite the relatively expensive guided munitions, have higher characteristics compared to the American laser system. In addition, in the nineties, Israel participated in the joint Nautilus project with the United States and, over time, due to the complexity and high cost, came out of it. In the future, the Americans independently developed this project, now it is better known under the name THEL.

Thus, at present, the ADAM complex is a real experimental sample, embodying an interesting concept, but without great practical prospects. Perhaps in the future, the work of Lockheed Martin’s employees will succeed, and ADAM will become weapons relevant units. But while this complex is facing the next stage of improvement, new tests and, probably, the next stage of refinement.