16 May 2013
7
I once stopped following one of my favorite samples among large-caliber sniper rifles, namely OM 50 Nemesis. Excellent performance, good design and a great name provided this arms quite a lot of fame, but a few years ago, the Swiss company AMSD sold the rights to these weapons to SAN Swiss Arms AG. It was in 2010 year, and already in 2011 it became clear why this purchase was made. SAN Swiss Arms AG proposed the further development of this rifle, but now under the name SAN 511. Let's try to figure out what exactly was changed in the original design of the weapon and try to evaluate the result, although it is quite difficult without testing the weapon itself.

Generally, frankly, personally I did not notice any significant changes in the design of the weapon. You can even say that SAN coke cost just a little cosmetic modifications of weapons and nothing more. This was done, apparently, not because of some need, but simply because the weapon had to be associated primarily with its new manufacturer and had a minimum of reminders of where it came from and who its true developer was. But this is only my opinion, maybe, really, all the changes were justified.

You need to start, probably, with the name of the weapon. The first part of the SAN indicates the manufacturer, the second part, namely the 511 number, refers to the rifle caliber, since the real caliber of the .50 BMG cartridges is exactly 0,511 inches. In addition, the weapon in the name can have another digit, 1 or 2, which indicate modifications of the rifle. Outwardly, both options differ only in an elongated mounting strap on top of the weapon, as well as additional side slats, which are two on each side. Separately, it is worth noting that the second version of the trunk remains free-weighted. Many say that the first and second versions of rifles have different material performance. I can neither confirm nor deny this information, but judging by the fact that the weight of the first and second versions of weapons with the same trunks differs only on 400 grams, then most likely, the same materials are used there and there, because in 400 grams, this is the difference in the presence and absence of an elongated mounting bracket and additional seats.

The weapon itself now began to feed only from a magazine with a capacity of 5 cartridges, regardless of the weapon version. The rifle barrel mount was left original on the 5 bolts that go through the receiver and are included in the chuck holes. Such fixation of the trunk has proven itself only from the best side, and the barrel can be replaced independently without any additional tools except a special key, which greatly simplifies the maintenance of the weapon, and can also reduce its dimensions during transportation, which is especially important for samples with a one and a half meter length . Butt arms folding, but, despite the external fragility of the junction, quite durable. Has the ability to adjust both in its length and height of the cheek support. True adjustment limits are very small. The butt has a “third leg” to facilitate long-term control over a particular territory. Weapon stores are ordinary single-row box stores that snap into place in front of the safety bracket. On the right and left sides of the weapon there is a three-position fuse switch. 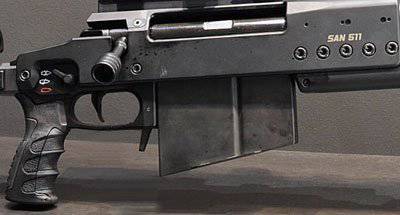 In its upper position, it blocks the trigger mechanism and the bolt of the rifle, for its transportation. In the middle position, the shutter becomes movable, but the shot will fail, and in the lower position the weapon is completely ready to fire. The switch is convenient enough to switch with the thumb holding the pistol grip, so the switch can be carried out without taking your eyes off the target. The handle itself is covered with a special "breathable" rubber, which not only prevents the shooter's hand from slipping, but also allows the skin of the palm to "breathe", in general, in the best traditions of diapers, unless it does not absorb moisture. The very shape and angle of inclination are quite comfortable, but they require habits, but they usually get used to good things quickly. To compensate for recoil energy, there is a muzzle brake-compensator of recoil, as well as a butt pad made of porous material. 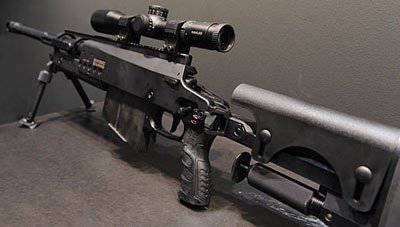 The basis of the rifle was a longitudinally sliding bolt locking the barrel when turning. The gate coupling does not occur at the receiver box, but at the breech breech, which reduced the load on the receiver box and made it from a light alloy, and such locking affects the accuracy of the fire only positively.

According to reviews of those lucky ones who have already managed to get acquainted with the updated weapon (I envy them very much), there is no increase in the characteristics, as well as a special increase in ease of use is not observed. In other words, the update took place without a deterioration of the weapon, which is also a positive result.