How Ivan Kozhedub Americans shot down

14 May 2013
277
Toward the end of the Second World War, the best Soviet asu had to give a flying lesson to the presumptuous “allies” twice.


Kozhedub replenished his combat score with two American fighter jets F-51 Mustang, who mistakenly tried to attack him over Berlin, but were immediately shot down while repelling the attack. As Ivan Nikitovich himself told me, 17 of April 1945 of the year, having met the “Flying Fortresses” of the allies in the air, he withdrew a couple of “Messerschmitts” away from them, but after a second he himself was attacked by American fighter jets. 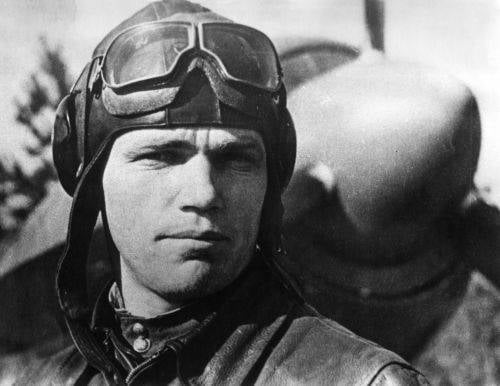 “To whom of the fire? Me?!” Kozhedub recalled indignantly half a century later. “The queue was long, with a long, one kilometer, distance, with bright ones, unlike our and German tracer shells. Because of the long distance, you could see the end the queue is bent down. I rolled over and, quickly moving closer, attacked the extreme American (by the number of fighters in the escort, I already knew who it was) - something exploded in his fuselage, he strongly steamed up and went with a decrease in the direction of our troops. reversal I attacked the next one. My shells lay down very well - the plane exploded in the air ...

When the tension of the battle subsided, my mood was not at all victorious - I had already managed to make out the white stars on the wings and fuselages. "They will arrange for me ... by the first number," I thought, putting the car down. But everything turned out In the cockpit "Mustang", landed on our territory, sat a hefty Negro. To the question of the guys who came to him, who had knocked him down (or rather, when this question could be translated), he answered: “Focke-Wulf” with a red nose ... I do not think he played along; even then the allies did not learn to look in both ...

When the PCF films were shown, the main points of the battle were fixed on them very clearly. The films were watched by the regimental command, divisions, and corps. The division commander, Savitsky, to whom we then entered into operational subordination, after watching, said: "These victories are in the account of a future war." And Pavel Fyodorovich Chupikov, our regiment commander, soon gave me these tapes with the words: "Take them to yourself, Ivan, and do not show it to anyone."

Although the future marshal to the front aviation Ivan Nikitich Kozhedub only got in 1943, his combat score looks impressive. For two years - 366 sorties on a mission, 120 air battles and 62 shot down German planes, despite the fact that Kozhedub himself was not shot down at once. Moreover, from the publications of recent years it is clear that the real list of victories of the Soviet ace is even more impressive. The vicious principles of "socialist collectivism" often forced the best pilots to share their victories with less capable comrades, and as a result, the fuselage of the La-7 fighter at number 27 turned out to have far fewer red stars than expected. This was written by fellow Ivan Nikitich, the illustrious test pilot Alexander Shcherbakov, and a number of other authors, however, the topic has not yet been seriously researched. However, according to some reports, Kozhedub shot down not 62, but as many as 107 enemy aircraft, five of which belonged to the US Air Force.

The clashes between the Soviet and American air groups, which began in the second half of 1944, were not the result of a confusion that was traditional for any war. Even then, the States considered the entire European continent their zone of influence. Once, the commander of the US Air Force Spats even defiantly refused to discuss with Marshal Zhukov the procedure for flying over the Soviet zone, impudently declaring that "American aircraft flew everywhere, and flew without any restrictions." (G.K.Zhukov. Memories and reflections. M., 1971. C.670).

Demonstrating its right to fly anywhere, the US command at the same time tested ours for lice, and also worked out methods of total air terror, which became the hallmark of American aviation in the coming decades. Few people know that, along with the militarily pointless destruction of the residential quarters of the German and Japanese cities, the Yankees no less fiercely bombed Yugoslavia. The bloody Easter of 16 on April 1944 marked the beginning of the air genocide. On this day, a whole air division of heavy bombers with the characteristic name Liberator (Liberator) launched thousands of bombs on Yugoslav cities, from which only 1 thousand 160 people died in Belgrade. There were nine such raids in all, and after 45 years история, as you know, repeated. And in order to emphasize the conscious choice of the date of the blows, the bombs falling on Belgrade were decorated with the inscription "Happy Easter!"

Well, for the first attack on the Red Army four dozen heavy American fighter "Lightning" also chose a symbolic date - November 7 1944 of the year. As a result of the storming of the 6 headquarters of the Guards Rifle Corps and the airfield of the 866 Fighter Aviation Regiment near the city of Nis, Corps Commander Hero of the Soviet Union Grigory Kotov and another 30 man died. In addition, two of our aircraft were destroyed and a dozen cars were burned down. Only when Soviet fighters soared, in turn, shot down several vultures, the rest fled. Subsequently, the witness of this battle, the pilot Boris Smirnov, wrote in his memoirs that on the map found in the wreckage of one of the Lightnings shot down, Niš was marked as an aerial target. After that, few people believed the official American version of the loss of the course.

The deputy commander of 176 of the Guards Fighter Aviation Regiment, who flew over Germany, 25-year-old Major Kozhedub encountered brazen “allies” twice. First 22 on April 1945, his car was attacked by a pair of American fighters of the Mustang type, but soon they had to regret bitterly. Less than two minutes, as one of the "Mustangs" scattered into pieces, and the second pilot barely managed to jump with a parachute.

Kozhedub survived an even hotter battle with the Americans just before Victory Day, when a squadron of Flying Fortress bombers loaded to the eyeballs, ignoring warning shots, entered the space of the Soviet occupation zone. Having driven three multi-motor giants into the ground, the major put the others to flight, but they were not allowed to include them in the official list of their victories. The regiment commander Pavel Chupikov just joked that he would have to fight with the Americans very soon, and on the very first day of the next war, their downed cars would be credited back to his account.

However, when the commander of one of the 64 divisions of the air corps, Major General Kozhedub, attacked US squadrons that were clearing the way for the UN peacekeepers in Korea, no new stars appeared on his plane. Moscow categorically forbade the division commander to participate in the battles, and therefore all 264 destroyed enemy aircraft should be attributed to the students of Ivan Nikitich.