The bombings in the Reyhanlis: the Turks told the world about the Syrian trail

14 May 2013
48
11 in May in the Turkish city of Reykhanly (Hatay province) thundered two explosions: first one, near the city hall, after a quarter of an hour - the second, already in the industrial area, near the post office building. Forty-six people died, 155 injured. According to the Turkish Ministry of Internal Affairs, eleven public buildings, 293 residential apartments, 450 offices of private firms suffered from the explosions. The Turkish government has made it clear to the world community that the attacks are related to the activities of the Syrian special services. There was a condemnation of the attacks from the European Union. 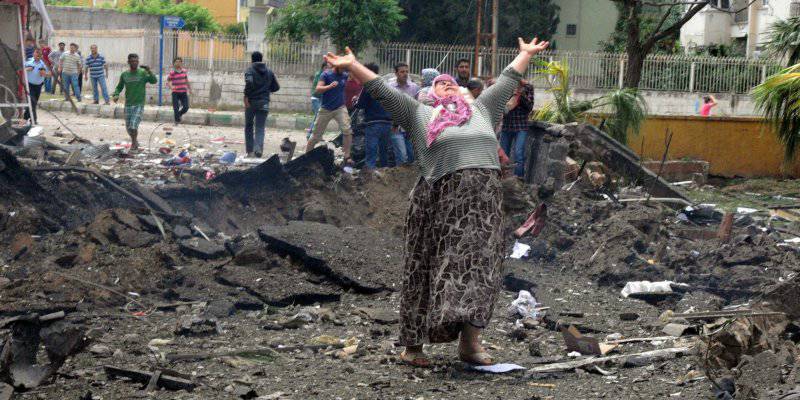 The day after the bombings Euronews reported that in Turkey, on suspicion of involvement in the bombings, nine people were arrested. The detainees are Turkish citizens. Ankara does not exclude the possibility that they worked for Damascus.

Earlier, Turkish Deputy Prime Minister Bulent Arinc said: “The capabilities of the Syrian special services and related armed groups give us reason to suspect them of organizing explosions. But, as I said, it is still too early to make official conclusions. To do this, we first interview the witnesses and wait for the data from our intelligence. " The Vice Prime Minister left for his country the right to take any response measures that she deemed necessary.

As for the Minister of Foreign Affairs of Turkey, Ahmet Davutoglu said that the authorities reserve the right to apply "any measures" in response to the bombings in the city of Reyhanlı near the border with Syria, which killed more than forty people, reports RIA News" with reference to Reuters.

According to "Lenta.ru"referring to Bloomberg, according to the Turkish authorities, several more people involved in the organization of the bombings are at large. According to the Minister of Foreign Affairs of Turkey, Ahmet Davutoglu, the suspects are associated with the Syrian intelligence service "Mukhabarat" and not the first time carried out operations in the country.

The version of involvement in the attacks of Damascus appeared shortly after the explosions: she was voiced by the Minister of Internal Affairs of Turkey, Muammer Güler. According to him, the reason for the attack could be that in the Reykhanly, located near the Turkish-Syrian border, there are many refugees from Syria.

Prime Minister R.T. Erdogan also suggested that Syria was behind the attacks, but he also put forward another version - that they could be carried out by people who were dissatisfied with Ankara’s recent attempts to resolve the conflict with the Kurds.

A reply came from Damascus.

According to the Syrian Agency SANASAR Information Minister Omran Az-Zoubi stated that the Turkish government had turned the border areas with SAR into centers of international terrorism, facilitating the transfer of mercenaries and terrorists to Syria, supplying them weapon and ammunition. That is why the government of Erdogan bears political and moral responsibility for what is happening before the Syrian and Turkish peoples, as well as the peoples of the entire region.

The minister criticized some Turkish officials who accused Syria of terrorist attacks in the Reykhanly, and noted that Erdogan, who is building a career on the blood of Syrian and Turkish civilians, has no right to be in power.

"Lenta.ru", citing the Associated Press, quotes the words of Al-Zoubi, who said that the Turkish Prime Minister should “resign as a murderer and executioner”.

Meanwhile, as reported correspondent RIA "News" Alexander Shishlo, head of EU diplomacy Catherine Ashton condemned the attacks, expressing solidarity with the government and the people of the country.

“The EU condemns terrorist attacks in any form and expresses full solidarity with the government and the people of Turkey at this difficult time,” said Baroness Ashton in a statement.

Many of the terrorist attacks in Syria, it should be noted, the West condemned not only in no hurry, but in general abstained from condemning. Therefore, the conviction of those explosions attributed to the special services working for official Damascus looks quite logical. One thing is fighters for Syrian democracy, another is the “regime” of Assad, hated by the West, which Mr. Erdogan is inclined to blame for all troubles.

Further, the case smoothly turned into a geopolitical plane. "It is time for the international community to take measures against the regime of Syrian President Bashar Assad," said Ahmet Davutoglu, who cited Rosbalt.

Alexei Pushkov, chairman of the Russian State Duma’s international affairs committee, believes that the accusation of the Syrian authorities of involvement in a major terrorist attack in the Reikhanly proves that some international players want to thwart a peace conference to resolve the Syrian crisis.

“Syria will again be blamed for the terrorist attack in Turkey - as always they were accused of everything. Someone wants to disrupt the peace conference and push the force variant, ”comrade Pushkov wrote on his Twitter page. This entry is quoted as saying. "Voice of Russia"referring to RIA "News».

Recall that the decision on an international conference was taken a week ago by Russian Foreign Minister S. Lavrov and US Secretary of State D. Kerry. The purpose of the planned meeting is to convince the opposition and the Syrian government to negotiate.

As transmits Al Jazeera, Turkish Foreign Minister A. Davutoglu said that the bombings near the border violated the “red line”. Regarding the "barbaric act of terrorism" that claimed dozens of lives, he accused the world community of inaction. This comment was given by Mr. Davutoglu in Berlin, the day after the terrorist attacks in Reyhanlı.

Earlier, Davutoglu told the TRT Turkish TV channel that he does not believe in the connection of the attacks with Syrian refugees in Turkey.

Nevertheless, on Sunday, hundreds of protesters took to the Antakya streets, about 50 km from the Syrian border. Several hundred people, mostly leftist and nationalists, marched through the center of the city with banners, shouting anti-government slogans. Spectators welcomed these people, reports Al-Jazeera.

In his speech in Istanbul, which was later broadcast on state television, Recep Tayyip Erdogan said: "We keep our heads calm, we will not depart from common sense, but we will not fall into the trap to which they are trying to push us." Then he added: "Anyone who is aiming for Turkey, sooner or later will pay for it."

Davutoglu, in turn, calls explosions a violation of the “red line” and says that “the time has come for the international community to demonstrate a common position against the regime ... immediately and without delay.” He called on the world community to "immediately" aim "at the result of the diplomatic initiative."

During the talks with Davutoglu, German Foreign Minister Guido Westerwelle expressed condolences over the victims of the “barbaric act of terrorism” and expressed his support for Turkey.

Al-Jazeera recalls that today, Turkey has received more than 400.000 Syrian refugees, many of whom have settled in Hatay province. According to the channel, Turkey is arming the opposition, fighting for the overthrow of Assad, although it denies the supply of weapons.

Militants can cross the border in any direction with little or no restrictions, which seriously bothers many residents on the Turkish side. This is not surprising: according to local residents, an increasing number of representatives of radical groups are joining the ranks of the opposition.

Thus, while the Turkish government is trying to profitably use bloody terrorist acts in its propaganda activities, convincing the West that the time has come for the accelerated democratization of Syria, the local population, gazing at the lively circulation of radical militants at the border, is worried about their future. Against this sad background, the EU and Germany separately condemned the terrorist act and expressed condolences to the families of the victims, and the Syrian Information Minister Omran Az-Zoubi said that Erdogan, building a career on the blood of Syrian and Turkish civilians, has no right to be in power. To this, he added that the Turkish Prime Minister should "resign as a murderer and executioner."

Observed and translated by Oleg Chuvakin
- especially for topwar.ru
Ctrl Enter
Noticed a mistake Highlight text and press. Ctrl + Enter
We are
Who blew up Turkey? The explosion in Istanbul and the "wave of terror" on Turkish soilTragedy in Ankara. Who blows up Turkey?
48 comments
Information
Dear reader, to leave comments on the publication, you must to register.