Troops of the country of the pyramids 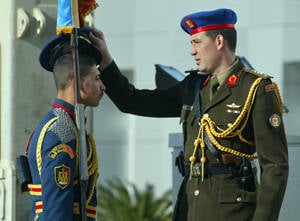 When the armed forces of the Arab Republic of Egypt (Egypt) held large-scale military maneuvers in Sinai in the autumn of 2008, Israel was traditionally chosen as the conventional opponent. This fact caused another tension between Cairo and Jerusalem. About five months later, in February of last year, when the Egyptians, in the same place, at Sinai, decided to re-check the readiness of their army, the name of the conditional enemy was not named. And this is not a diplomatic ploy: the military, as we know, is bad diplomats. The entire course of the February maneuvers, code names, range of conditional strikes indicated that last year the Egyptian army beat a hypothetical conflict with armed groups, whose ally the IDF (Israel Defense Forces) cannot be by definition.

The Egyptian army has always been considered the most powerful in the Arab world. The total strength of the APE armed forces is about half a million soldiers and military officers. In addition, almost 350 thousand people are still under arms in the paramilitaries of the security structures, border troops and the National Guard. It is not surprising that the Egyptian armed forces are among the top ten armies in the world in numbers. The basis of the armed forces is the ground forces (SV), including motorized infantry, tank and artillery brigades, airborne units. According to the staffing table, the NE includes reconnaissance, engineering, transport units, as well as chemical protection and rear support units. At the operational level, troops are combined into four military districts, which, with the outbreak of hostilities, will be transformed into fronts.

In service with the SV are tanks, armored combat vehicles, self-propelled and towed guns. The armed forces of the ARE have separate brigades of operational-tactical missile systems "Luna-2M" and ballistic missiles R-17E. The entire missile fleet is still Soviet-made, almost unmodified. Military aviation ARE is represented by 26 squadrons, equipped mainly with American-made aircraft F-15 and F-16. Also, the Americans gave the Egyptians about 200 combat helicopters. It should be noted that on most of the pyramids supplied to the Country of armaments and equipment there is an overseas stigma. In this case, Washington is applying the option of military assistance tested on the Israelis to the Egyptians. For the $ 2 billion allocated to Cairo specifically as military aid, the Egyptians have the right to purchase only American weapon, ammunition and military equipment. However, if airplanes, helicopters and aircraft are supplied directly from the United States, then tanks and armored vehicles are assembled in Egypt under a US license.

Note that in terms of the number of heavy weapons, the army of the Arab Republic of Egypt far exceeds the IDF today. And the quality of weapons, now entering the Egyptian arsenals, is not far behind the Israeli one.

Egypt’s Navy is considered to be the largest in the Arab East and Africa. However, his combat power is highly questionable. The basis of the Egyptian Navy are six obsolete, but modernized and armed with modern weapons of American frigates such as "Knox" and "Oliver Hazard Peri."

The light fleet is represented by Chinese-made boats based on Soviet models. As for the underwater fleet, then it does not withstand any criticism, because it was mainly built according to the designs of the 60s of the last century. Even the supply of two diesel submarines by the Netherlands two years ago did not change the situation. Almost all naval mine-sweeping and small landing ships were put up by the Soviet Union, and Poland delivered three large landing ships in 1974.

In peacetime, the army of Egypt is five times the size of the IDF. According to the law adopted in 1980, the armed forces of Egypt are recruited on the basis of the principle of universal conscription and the voluntary hiring of contractors. In peacetime, males from 18 to 30 years are eligible for health reasons. The term of active military service is three years, a stay in reserve in peacetime is nine years. But in the event of war and the announcement of general mobilization, the age limit for recruitment extends to 50 years. It is not at all difficult to detract from the appeal to young men belonging to the educated strata. The law provides deferment, reduced service life for persons with at least secondary education.

For certain categories of students and those with higher education, complete exemption is possible. Girls are not called in to the local army, but formally the Minister of Defense has the right to announce the recruitment of female volunteers to non-combat army units and labor battalions.

The service life of personnel officers is defined in 20 years, then they are in reserve for three years. Ordinary and non-commissioned officers are mainly recruited from illiterate peasants. Therefore, mastering them even with simple military service skills requires special training in the respective centers. Literate recruits are trained directly in the units.

Officers are trained in military schools, as well as in military departments of civilian universities. In some cases, the rank of lieutenant is assigned to particularly distinguished non-commissioned officers. Training for senior officers is carried out at the Military Academy of the General Staff named after Gamal Abdel Nasser.

In Egypt, the army has always been and remains the supplier of cadres to the state administration. The current president, Hosni Mubarak, is a former military pilot. A lot of former military among provincial governors, ministers, heads of diplomatic missions. For immigrants from rural areas and small towns, serving in the army is perhaps the only way to a certain wealth.

The most common method of controlling the armed forces in all Arab armies, including the Egyptian one, was and remains high military salaries and financial support for the army as a whole. However, individually supporting hundreds of thousands of soldiers in the treasury of money, of course, is not enough. Therefore, the recruitment of military personnel and the formation of army units bear the undoubted class character. Elite units are supplied much better than those in which the majority of military personnel are represented by former peasants. Hence, riots in the army are not uncommon. Thus, in 1986, 20, thousands of soldiers and officers from the guard of order, revolted. The reason for the rebellion is very trivial - the command has sharply reduced the norms for the issuance of bread. The government sent three elite divisions against the rioters, which ruthlessly dealt with the disobedient units.

Egypt spends huge sums on purchases of arms, army equipment and equipment. At the same time, ARE is developing its own military industry.

It should be borne in mind that the military industry of Egypt, the largest in the Middle East, includes all areas of production - from small arms and ammunition to tank and airborne missiles. In the production of weapons Egyptians cooperate not only with the Americans. In Egypt, mortars are made, anti-aircraft guns according to their own developments, and tank guns and howitzers - according to English and Finnish licenses, respectively. Accumulated experience in the production of communications, fire control systems and military optics.

The Ministry of Military Industry (MEP) of Egypt manages 16 state-owned enterprises producing both military and civilian products. It is important to note that ammunition is produced only at enterprises of the profit center. Established in 1975, the Arab Industrialization Organization (AOI) concern, which included, besides Egypt, Saudi Arabia (CA), Qatar and the United Arab Emirates (UAE), controlled nine military enterprises in the Pyramid Country. At the beginning of the 90 of the last century, the CA, Qatar and the UAE left the AOI, and now the AOI is the only Egyptian concern.

A very curious reason for the actual collapse of the IDF. Egypt insisted that the Arab countries and the more so the founders of IDF buy their own products. But the Saudis strongly opposed such an approach. The example of the SA was followed by Qatar and the UAE. Today, it is the SA, and not Egypt, that occupies a leading position in the import of weapons, primarily American. Until recently, together with Brazil, the Egyptians produced a Tukano aircraft belonging to a combat training type at the aircraft plant in Helwan, which is part of the IDF concern. Today, there is an assembly of aircraft of the same class, but the Chinese.

At the same plant, aircraft engines of Russian-made MiG-21 aircraft, the French Mirage-3 and a number of US airlines are being repaired and upgraded. The production of training aircraft began, the projects of which Egypt has developed jointly with China and Pakistan.

The traditional - started back in 50-s years - cooperation with Spanish and German firms continues. Recall that the first jet fighter built in Egypt was developed in Spain by a team of designers under the guidance of the famous Willy Messerschmidt. The Egyptians believe that the Soviet arms supplies slowed down the pace of their own production of military equipment. Today, Cairo considers it necessary, in principle, focusing on Washington, to seek other opportunities for joint production of weapons. Thus, the current Egyptian leadership is trying to add India to its program of development of supersonic fighter aircraft projects.

ARE left a huge amount of Soviet military equipment. Until now, the C-125 missile systems, the Kvadrat anti-aircraft missile systems and a number of others remain in service with the Egyptians. According to the contracts concluded by Cairo with Rosoboronexport, Defense Systems, Almaz-Antey and Ukroboronservis, this equipment is being repaired by Russian and Ukrainian khubars (in Arabic, specialists). In 2009, Moscow supplied the Egyptian Army ten MI-17В5 military helicopters manufactured by the Kazan Helicopter Plant. This year it is planned to deliver ten more. Taking into account previous deliveries to the ARE army, at least 100 Russian helicopters are operated. Egyptian military are interested in such modern Russian air defense systems as the C-300 and C-400.

At the end of the 90 of the last century, Egypt invited North Korean Khobar to the country, who, using solid-fuel engines, were able to bring the range of tactical missiles (such as Scud) to 500 kilometers. North Korean “Nodon” launch vehicles are used as a model for creating medium-range ballistic missiles - up to 2000 kilometers. Thus, the defensive concept of ARE is quite consistent with the Arabic proverb: “Before you shoot, fill your quiver with arrows”.

Cairo exports its military products to a number of Arab and African states. Israeli weapons, ammunition, ammunition and defense technology are bought in 50 countries. Thus, Jerusalem came in third place in the world (after the United States and Russia) in the export of military products. Jerusalem is actively introducing unmanned combat vehicles — most likely, in 10 – 15 years, Israeli planes will be one-third unmanned. Cairo has not started an unmanned military aircraft yet. Cairo has not seen any clear nuclear ambitions. The Egyptian nuclear program began to be developed at the end of the 60 of the last century, but in 1973, it was completely mothballed. Consequently, the Egyptians do not forget another Arabic proverb: “Do not swords of such arrows, which you cannot reflect.”

ARE legislation prohibits military personnel from engaging in political activities and participating in the work of any political parties. Nevertheless, all the Egyptian presidents after the deposition of the monarchy in July 1952, came from the officer corps. These included the first president, Mohammed Nagib, the second president, Gamal Abdel Nasser, as well as Anwar Sadat and the current leader, Hosni Mubarak, by the way, a graduate of the Frunze Military Academy. It is doubtful that this tradition will be broken in the foreseeable future.