13 May 2013
51
Crusader 155-mm self-propelled howitzer was developed for the US Army to replace Paladin. It was assumed that the United States Army would need some 800 self-propelled guns. The Crusader program in May 2002 goals were officially terminated by the Ministry of Defense, because Crusader was considered insufficiently accurate and mobile in the light of the requirements of the XXI century. United Defense in August 2002 received a formal notification, which stopped all further work on the program. At the same time, United Defense received a contract to use the technologies developed for the Crusader program to create a new Objective Force Cannon (Tools for Advanced Forces) or tools for firing non-Line-of-Sight indirect firearms (NLOS). “Prospective Forces” is the working title for the long-term program of the future United States armed forces. 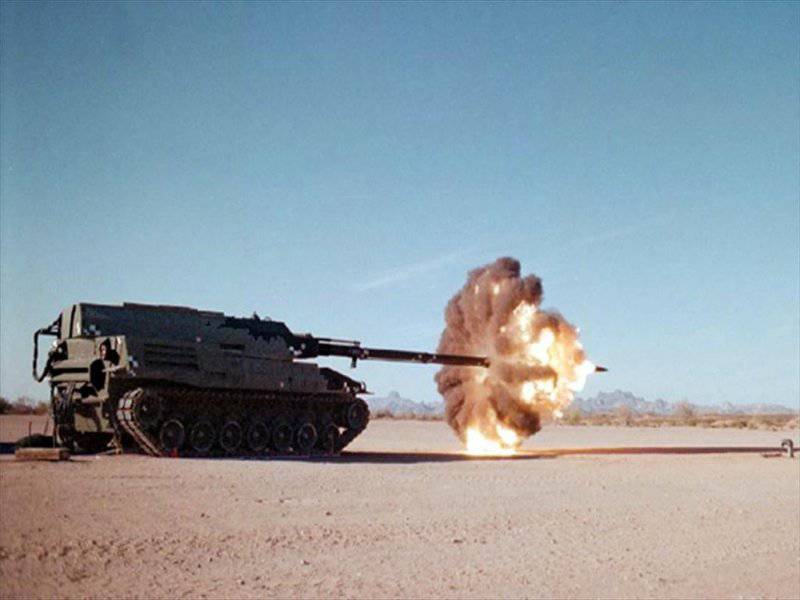 Crusader's test firing at the Yuma range (Arizona) began in February 2000. In November of the same year, the 10,4 firing rate per minute was achieved. In November 2001, a preliminary design assessment (PDR) was conducted. Start of production was scheduled for 2006 year, and the adoption of Crusader into service was planned for 2008 year. Crusader was developed by Team Crusader under the leadership of United Defense.

It was assumed that the Crusader artillery system would provide better mobility, efficiency and survival, and would also be much easier to maintain and deploy than the existing systems. A battery from 6 Crusader can deliver 15 tons of ammunition to the target in less than 5 minutes.

To achieve these characteristics, United Defense has reduced the weight and size of the crusader — from the initial 60 tons to the 38 –41 tons. This made it possible to simultaneously transport 2 howitzers by C-17 or C-5 aircraft. Thus, the use of a self-propelled howitzer Crusader for fire support was facilitated.

The Crusader includes two vehicles - a self-propelled howitzer XM2001 and an armored transport and loading machine XM2002. The high level of automation makes it possible to reduce the crew of both a loading machine and howitzers to reduce to just three people. The process of loading and firing is controlled from a computer-equipped cabin, which is hidden under the armor and has a protection system weapons mass destruction. The armored transport loader has not only a tracked but also a wheeled variant. 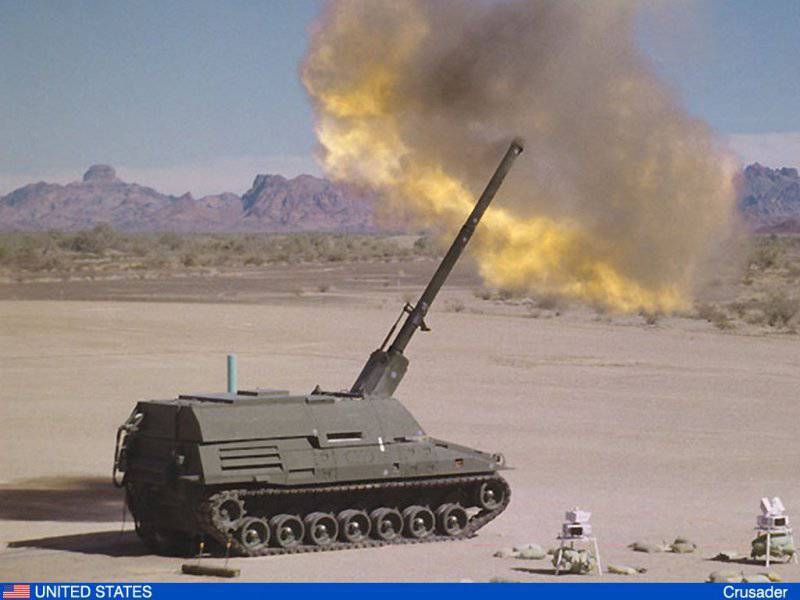 The XM2001 howitzer is equipped with a fully automated loading and firing system, which makes it possible to shoot 48 projectiles (full howitzer ammunition) with a maximum speed of up to 10 rounds per minute over 40 thousand meters. 15 seconds are required to produce the first shot. In addition, Crusader can produce a series of shots with a simultaneous hit on the target shells. One Crusader machine provides simultaneous hit on one target to 30 projectiles. The digital fire control system calculates the solution separately for each of the 8 shots. 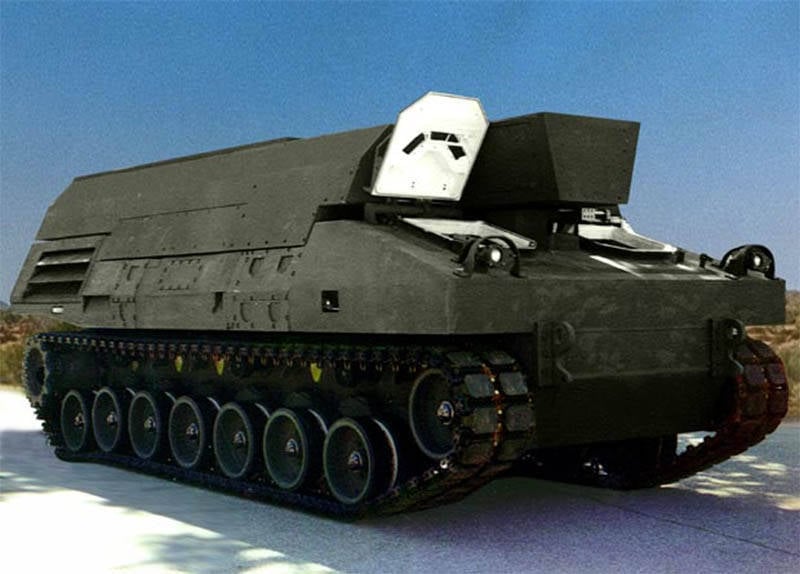 The Crusader howitzer ammunition is replenished with the XM2002 transport loading machine, which is equipped with a fully automated loading subsystem. This subsystem enables the crew of the HM2002, consisting of an 3 man, to replenish the fuel supply and load 48 shells into a howitzer in less than 12 minutes. without leaving armor protection. Loading can be performed in the conditions of bacteriological / chemical contamination. It takes less than 60 minutes to load the transport vehicle with projectiles and fuel.

The Crusader command center is equipped with tactical systems that provide assistance in decision making, navigation and positioning, and an automatic friend-to-friend recognition system.

The Crusader control system sends and receives real-time battlefield data using the Advanced Field Artillery Tactical Data System (AFATDS). Crusader can communicate with other machines directly. A secure information transmission network links a howitzer, a loading vehicle, as well as all other combat units on the battlefield, transferring real-time data to each machine in real time. 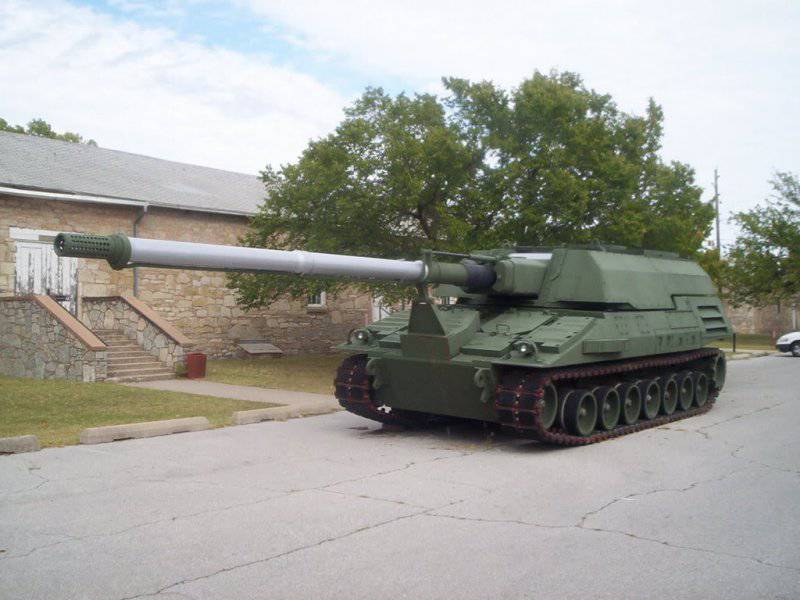 Artillery subsystem Crusader used solid propellant. It consists of the actual instrument, machine and laser charge ignition system. The extremely high rate of fire is ensured by the integral cooling system of the barrel of the cannon between the double walls. To minimize wear and environmental impact, the barrel of the gun and charging chamber are coated with chrome. The gun charge chamber is compatible with MACS (Modular Artillery Charge System), which use solid propelling agents. 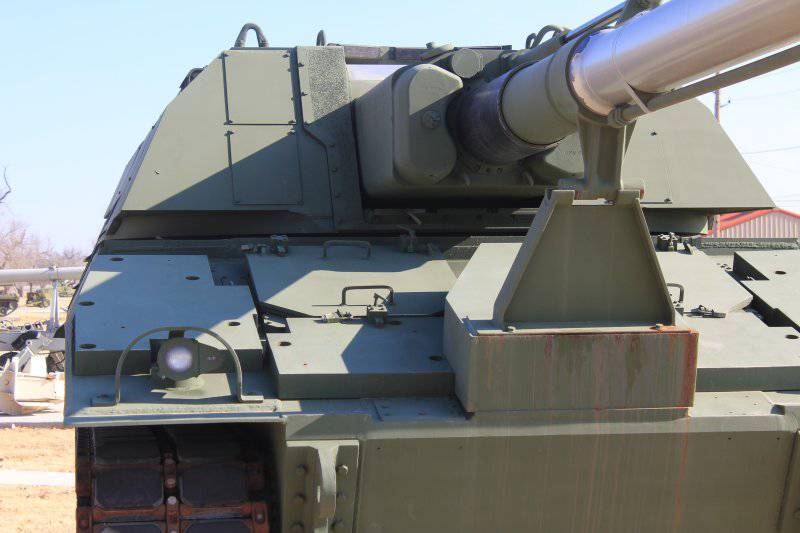 Hydropneumatic suspension and the Crusader engine provide highway traffic at speeds up to 67 km / h, over rough terrain - 48 km / h. The transmission allows you to select the gear ratios and the mode of the engine in automatic mode for maximum fuel economy. The control system consists of electronic motion control, as well as assistance in motion planning and positioning.

The U.S. Army has selected General Electric and Honeywell International Engines as developers for the Crusader LV100-5 gas turbine engine. They wanted to use the same engine for tank M1A2, as part of the Abrams / Crusader single engine program. The new engine was supposed to be smaller and lighter, with faster acceleration, no visible exhaust and less noise.