Syria will finish off Israel and Turkey 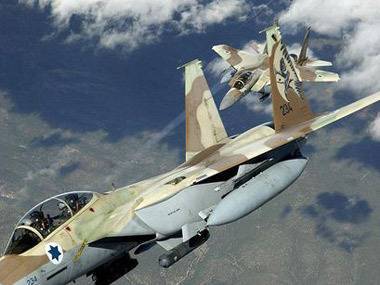 The two-year joint attempts of the West and the Arab countries to destroy independent Syria have so far failed. Syrian authorities, supported by the population, are slowly crowding out rebels and Arab mercenaries. NATO military intervention modeled after Libyan blocked by Russian military presence fleet. With the help of the Russian navy, new weapons and ammunition are regularly supplied to Syria. But a lot of money and big resources have been invested in the Syrian project, and the West does not want to back down. Therefore, in order to nevertheless finish off independent Syria and gain a decisive geopolitical advantage for further cleansing the globe in the direction of Iran and Russia, it seems that some time ago it was decided to use other resources and directions - to bring its immediate neighbors to destroy Syria - Turkey and Israel. Turkey is already a springboard for training militants and for supplying them, but this is not enough. Perhaps, an occasion is now being sought for direct Turkish intervention. It will be terrorist attacks or other provocations - it does not matter.


Israel has directly intervened in the Syrian conflict. May 4th night was committed aviation attack on Syria. After that, the Syrian authorities made a number of statements, filed a complaint with the UN and redirected their missiles to Israel, and specifically stated that their launch would be possible even with decentralized management. Syria also asked for help from Russia. Syria and Russia a few years ago, among other contracts, a contract was signed for the supply of Syrian S-300 air defense systems with a radius of about 150 km to Syria, which would reliably block the sky of Syria from air strikes and airstrikes. Russian Foreign Minister Sergei Lavrov said on May 10 that Russia would not conclude new contracts with Syria, but would fulfill the old ones.

The next day, on May 11, information appeared that Israeli Prime Minister Benjamin Netanyahu was urgently traveling to Russia for talks with Russian President Vladimir Putin.

The Israeli Prime Minister has repeatedly met with Russian leaders in Moscow. The first time he came to Moscow in the distant 1997 year, where Muscovites remembered being late for his wife Sarah to a reception at the then head of the Russian government, Viktor Chernomyrdin, as well as an unusual request to him - to mention during the ceremonial performance of his wife Netanyahu’s development Russian-Israeli relations. I do not think that Russian politicians and diplomats after all this began to consider Benjamin Netanyahu an independent and strong-willed politician.
After that, Netanyahu repeatedly visited Moscow. In September 2009, he secretly flew to Moscow to meet with D.A. Medvedev, and in February 2010, the Israeli Prime Minister again visited the Russian capital and held meetings as with V.V. Putin and D.A. Medvedev. Also, a brief, one-day visit by the Israeli Prime Minister to Moscow took place on March 24, 2011. He was nearly canceled due to a big terrorist attack in Jerusalem. All these visits by Netanyahu also did not lead to any Russian-Israeli joint actions, either in politics or in the economy. Some of the consequences of these visits can be considered cancellations or delays in the supply of Russian weapons to Syria and Iran. By canceling these supplies, Russia did not receive anything substantial in return from Israel.

Now, as soon as the real possibility of resuming the supply of the C-300 system to Syria arose, Benjamin Netanyahu again goes to Moscow. But now the geopolitical situation has changed in comparison with previous years. Both Israel and Russia to a greater extent than before are involved in the Syrian conflict. And, if Israel’s real goal is to destroy Syria as an independent and sovereign state by military means, using its aircraft - the strongest in the region and fifth in terms of strike power in the world, then Russia’s goal is to stabilize the situation in Syria and reliably protect its ally, the President of Syria Bashar al-Assad and his power.
In order to reliably protect Syria from possible air raids and airstrikes, the likelihood of which increased after the 4 attack on Syria in May, Russia has to urgently supply air defense systems to Syria. Rejection of these supplies means for Russia a real betrayal of its ally and wasted huge resources, the unnecessary basing of the majority of the Russian fleet off the coast of Syria. All this, all these efforts of Russia will be in vain after several bombings of Israeli aircraft on cities and military facilities in Syria.

What can a person who, in 2011, at the forum of the G-20 countries, the leaders of two great powers - the USA and France, Barack Obama and Nicolas Sarkozy called a liar - can offer Russia on behalf of Israel? Nothing. Natural gas in the Mediterranean? A few high-tech hi-tech chips? Two week rest in Eilat? This all costs nothing. He goes to Russia empty and will try to cheat and deceive.
On the same Israeli website, on which information about his visit to Moscow hangs, other information hangs, about the same person: “Prime Minister Benjamin Netanyahu said in response to a message that his desire to install a double bed in the plane cost the taxpayer in half a million shekels, he did not know about the high cost of such a wish. Netanyahu also ordered not to install a sleeping compartment on the plane. According to the Israeli TV channel 10, the Office of the Head of Government demanded that a special sleeping compartment with a double bed be installed on the plane on which Benjamin Netanyahu and his wife flew to Margaret Thatcher’s funeral in London. This increased the cost of flying by almost half a million shekels. Expenses were paid from the state treasury. ”

The man who wants to destroy Syria under the nose of Russia, in order to attack Iran later, does not know how much an individual re-equipment of his personal aircraft costs for installation in the cabin of a double bed. Or pretends not to know. He has nothing to offer Russia. But he really wants to finish off Syria, then to attack Iran.

Should Russia help him in this, should Russia risk its fleet, its specialists now in Syria, should Russia lose its geopolitical ally in the Middle East and risk losing another global ally - Iran, without receiving anything in return geopolitical defeat and “loss of face” is the issue that will be discussed at these negotiations. Now, in the face of a new combined aggression against Syria, the price of supplying C-300 air defense systems to Syria is the price of a great geopolitical loss and defeat of Russia's entire foreign policy. What decision the Russian authorities will take, whether they will want to suffer defeat from the united coalition of the West, the Arab countries of the Persian Gulf, Turkey and Israel, or will they leave their national and geopolitical interests in Syria, we will find out this week.

Ctrl Enter
Noticed oshЫbku Highlight text and press. Ctrl + Enter
We are
Military reform as an integral part of the security concept of the Russian Federation: Systematic dynamic assessmentInterview by President Bashar Al-Assad to the Sunday Times
Military Reviewin Yandex News
Military Reviewin Google News
401 comment
Information
Dear reader, to leave comments on the publication, you must to register.