13 May 2013
39
T-64 really did not participate in wars. That war for which it was intended, fortunately did not happen, he was preparing for a confrontation with the United States and NATO, formed the basis of the GASVG. The only combat use is the war for the independence of Transnistria, where this tank played a decisive role.


The main place of application of the T-64BV was the battle for the city of Bender, occupied by the Moldovan troops. June 20 was the so-called "capture by the civilian population" tanks were in long-term storage of 59 motorized rifle divisions of the 14th army.

On the same day, hastily removed from the conservation tanks have already participated in the battles. Preparation of the T-64BV for the assault on Bender was carried out in the village of Parcani, directly behind the viaduct of the bridge over the r. Dniester. 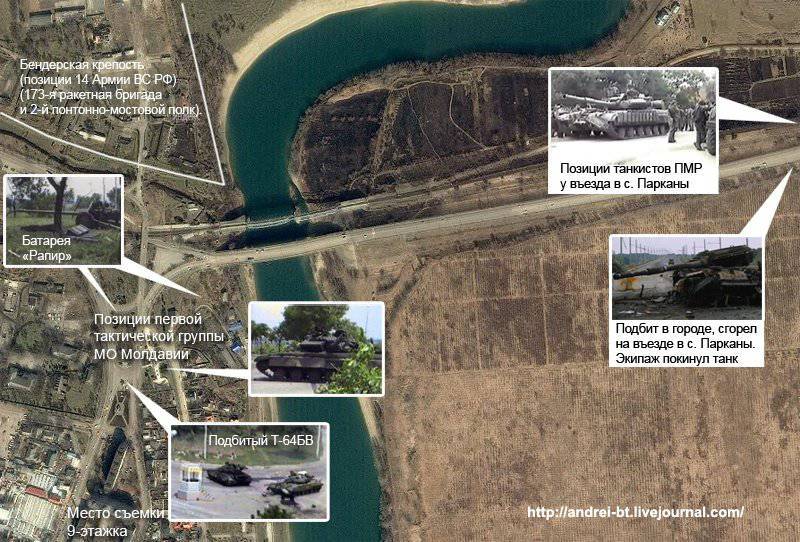 The scheme of hostilities with the use of T-64BV in the battles for Bender.

Transnistrian crews are not familiar with T-64BV, although they were experienced tankers, they were preparing for T-55 and T-62 tanks.
At a hastily removed from the conservation tanks did not have time to prepare weapons for battle, to make its reconciliation. 12, 7 mm heavy machine guns were not installed, the Contact-1 dynamic protection system was not equipped with 4-XNNXX dynamic protection elements. Part of the tank was equipped with elements of the DZ partly (only in the most vulnerable areas).
The Moldavian side had at this site a sufficiently powerful anti-tank defense which was based on 100 mm anti-tank guns MT-12 "Rapier", anti-tank grenade launchers and anti-tank systems "Competition". 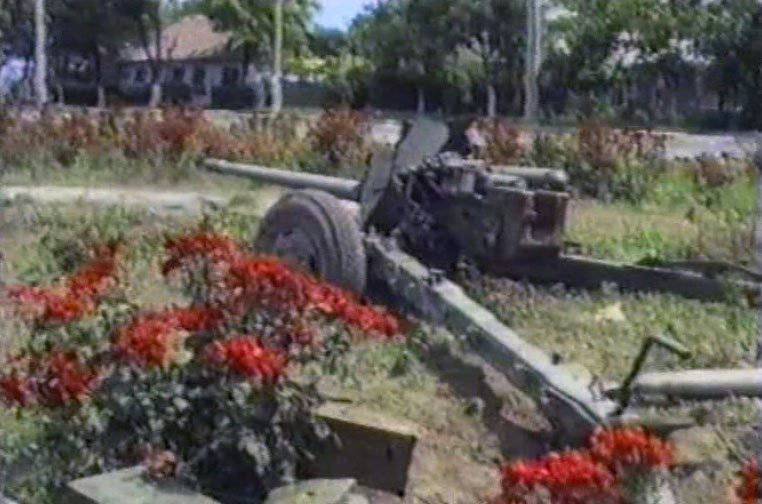 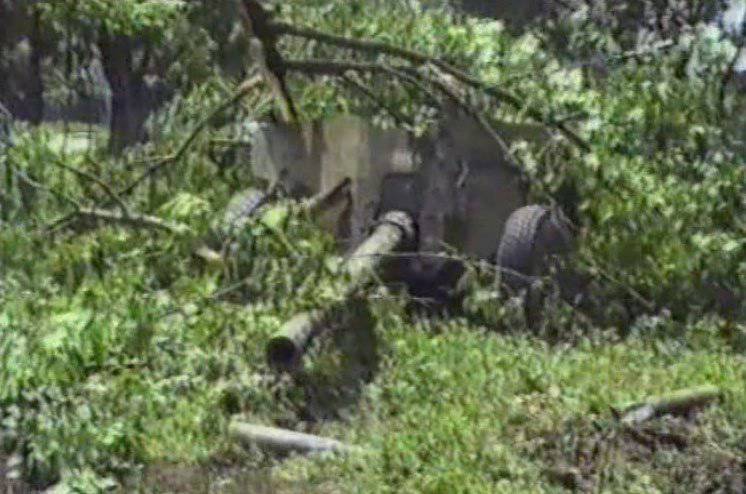 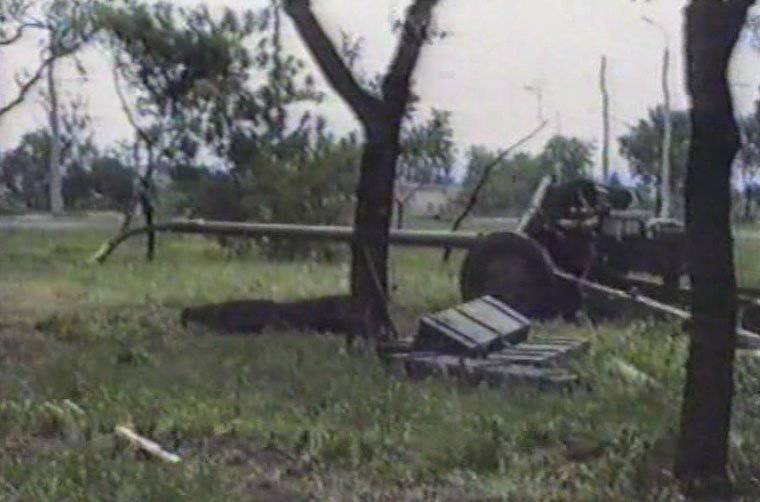 Moldovan PTP "Rapira" defending the bridge over the Dniester.

Anti-tank cannons “Rapier” and anti-tank grenade launchers were the main anti-tank weapons of the Moldovan side. 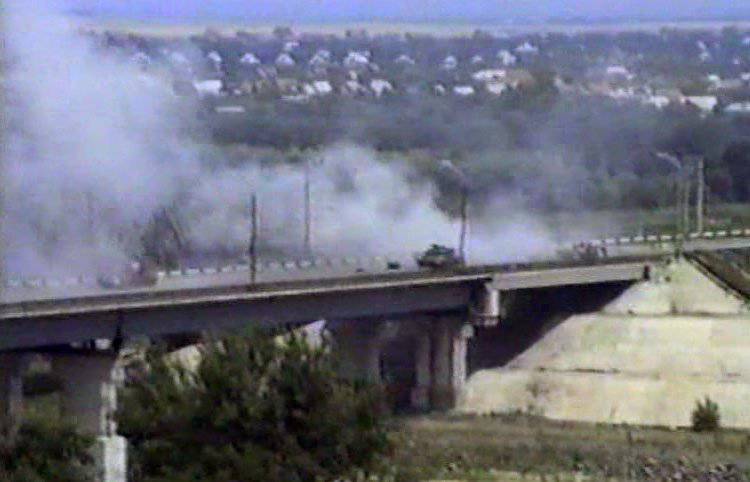 Tanks were ledge, as far as the width of the bridge allowed.

The Vukolov tank, having entered the bridge, fired six shots at the enemy positions from the spot, destroying the BTR. After which several more targets were destroyed.

The tanks broke through the line of defense and found themselves on the site near the traffic police booth without the support of infantry in the open and well-swept area of ​​the park zone. A small landing party, who was on armor, led the battle at the very exit from the bridge and could not cover the tanks.
The tank attack made a great psychological impact on the Moldovan soldiers, among whom the panic began. So while passing the bridge, the first shot of the tank killed an observer of the anti-tank battery from the Moldovan side. Calculations of two guns "Rapier" fled. Lieutenant Colonel Karasyov stood up for the gun of the remaining "Rapier" 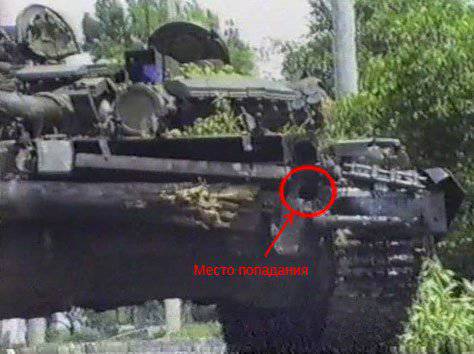 One of the Transnistrian T-64BVs that broke through in Bender. You can see the cumulative projectile PTP "Rapier" in the rear part of the body (at the point of the hole there are traces of the plumage of the projectile). 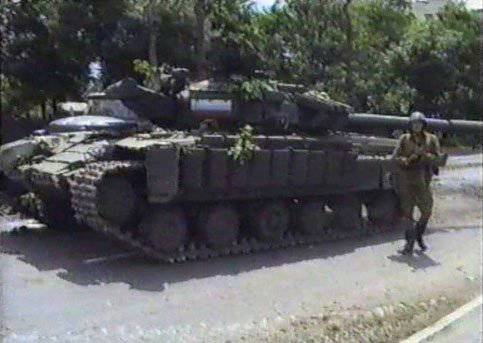 Even damage to the stern of the tank did not lead to irretrievable losses. Tanks with such damage remained combat-ready, but while on the territory completely controlled by the enemy and without the support of infantry, the crews had little chance of survival. 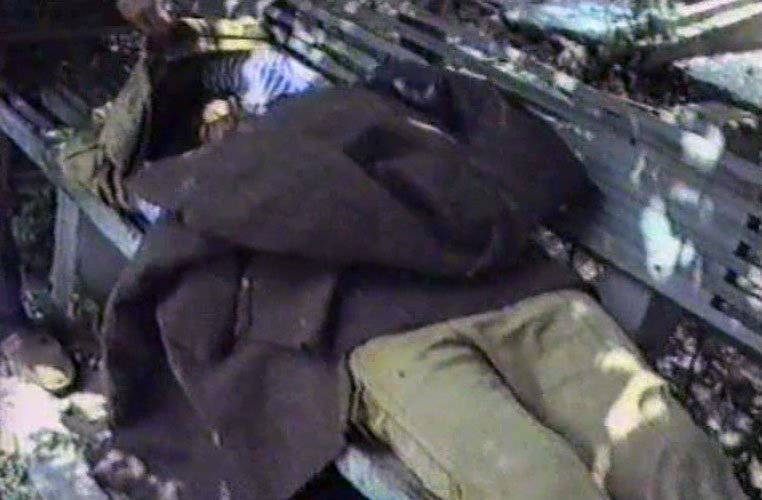 The gunner continued firing to the complete consumption of cartridges in the tape (recharged by the tank commander). The tank was captured by the Moldovan military ... (hereinafter the versions of the Moldovan and Transnistrian sides are very different). 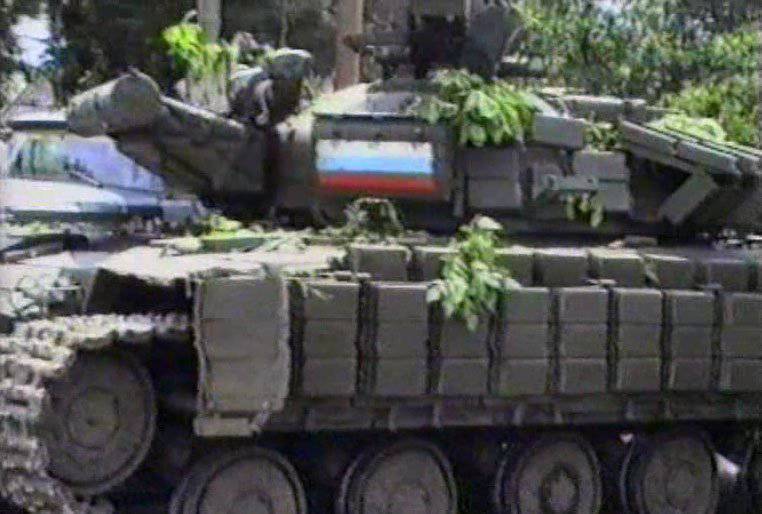 Tank lined in the aft hull of the PAP "Rapier". The hit immobilized the tank, but at the same time it retained its combat capability.

Caught cut off from the infantry tank commanders Bezgin and Grishin tried to return to the bridge. Grishin was the first to turn right through the right, after which, at the stern of the tank, he shot the calculation of the Rapier anti-tank machine, disabling the engine. Tank Bezgin was damaged, but did not lose the course and, leading the battle, went to the bridge. 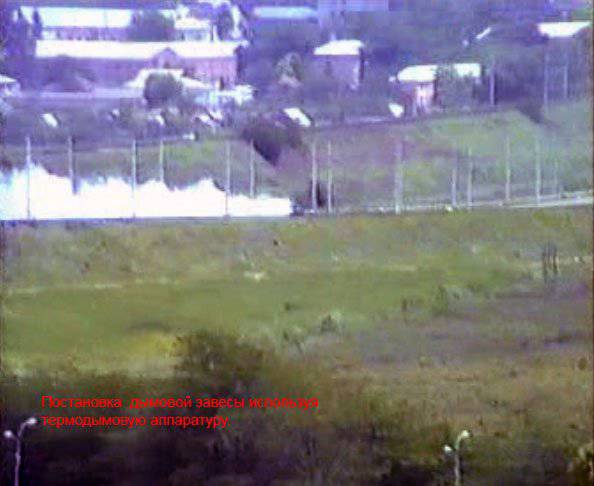 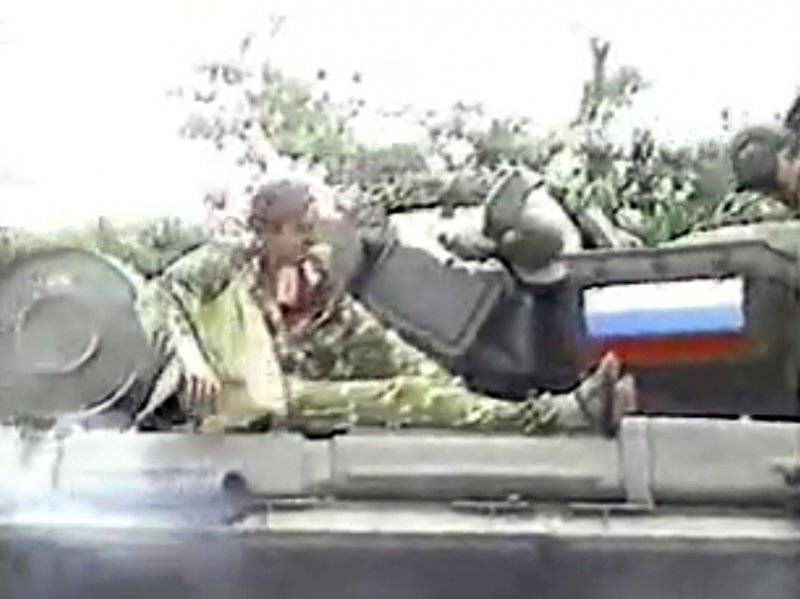 The Russian flag painted on the tank had a great psychological effect on the Moldovan military (they thought that the 14 army of the Russian Federation directly intervened in the hostilities). 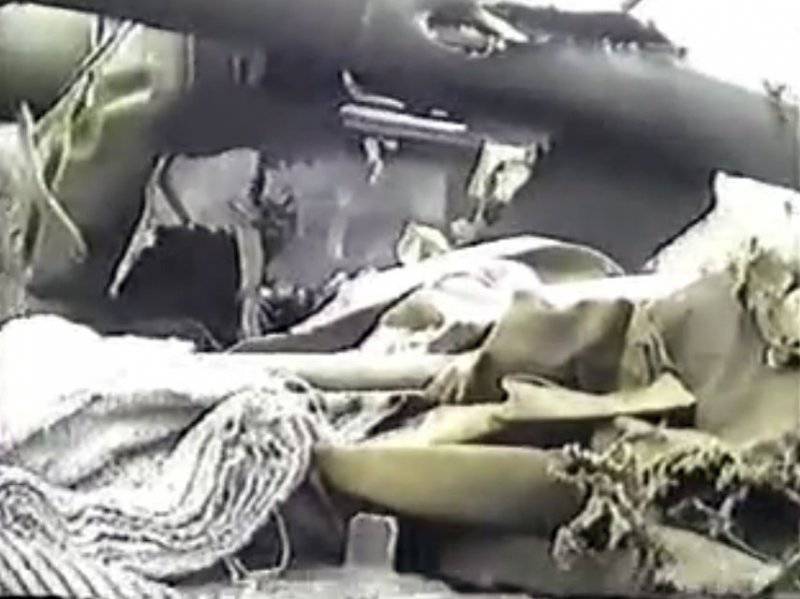 Tank damage from hits (v. Parcani, after the attack) 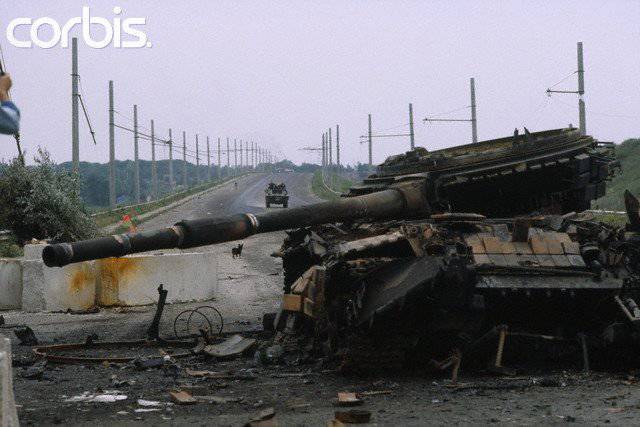 Everyone knows the photo (© corbis) of the T-64BV which was shot down after the attack. [/ Center]

The tank, lined with Moldavian guns MT-12 "Rapier", seriously damaged, left Bender, and burned at the entrance to the village of Parcani. The crew moved to another tank and went into battle again. 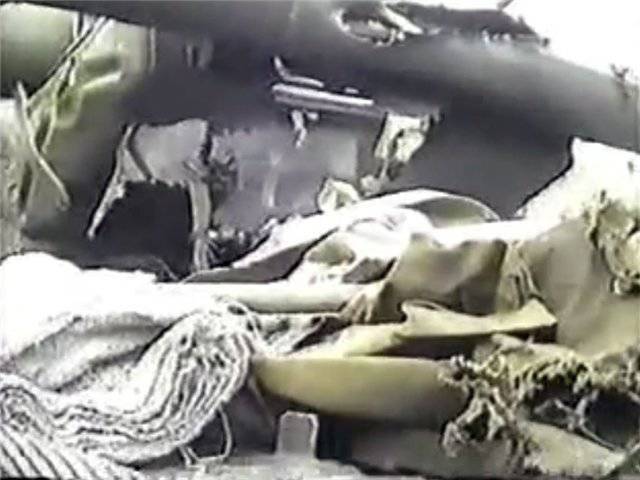 Hit in the stern part of the turret of the T-64BV tank during the second attack.

The second attack was undertaken by two T-64BV tanks. The crew of one of the tanks took the tank along the same path as the tanks damaged before. The tank went forward and the shells from the "Rapier" with the rebound left armor. 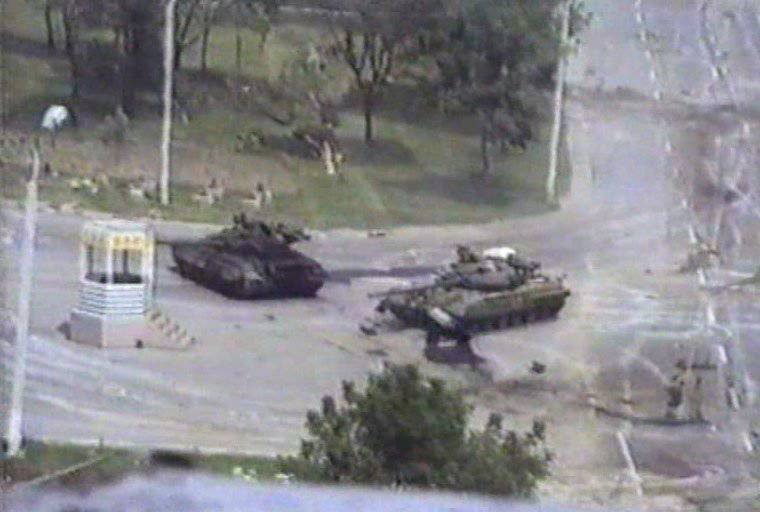 T-64BV in the course of the second attack next to the tank that was shot down at the traffic police post.

Having reached the damaged tank at the fork, the tank turned around and framed the side of the stern. It was damaged in the very center of the park zone by a shot from the RPG-7. Having stayed there, the tank still started the engine and went back to Parkan with the installation of a smoke screen using thermal smoke equipment (TDA). 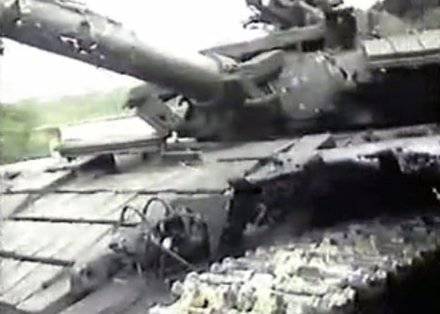 Tanks after the battle in the village of Parcani. Hit in frontal projection, damage to the DZ tower, thermal insulation casing shrapnel.

Damaged tanks were evacuated to Tiraspol, where they were repaired as soon as possible, two tanks can be attributed to irretrievable losses that cannot be restored. Then these tanks again took part in the hostilities. The operation on the release of Bender ended only 21 June.

The decisive attack began in the evening around 8 hours, it was attended by three T-64BV and three armored personnel carriers. This time, sufficient support was provided to infantry tanks ...

The attack took place along the already known (and the only possible) route towards the traffic police post. Anti-tank guns "Rapier" opened fire on the attackers, one of the shots hit the side of the tower of the first tank, its commander A. Smirnov was killed. The attackers bypassed the damaged tank, and the attack continued, a long battle ensued. At night, the Moldovan troops left their positions.

T-64BV near the city council of Bender.
After a number of cases of destruction of the T-64BV tanks into the aft sections of the turret and hull, decisions were made to increase their protection.

Additional protection was established with the help of the standard Koktnakt-1 hinged dynamic protection complex. 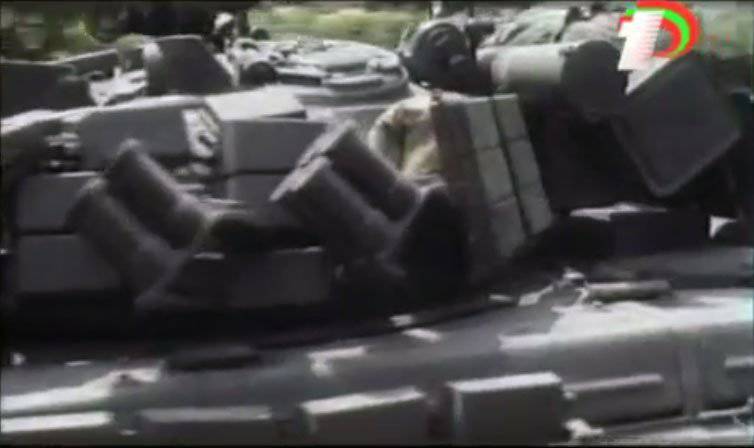 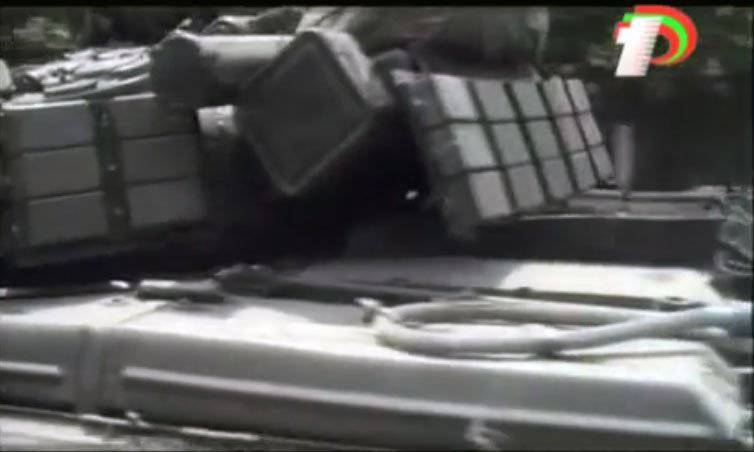 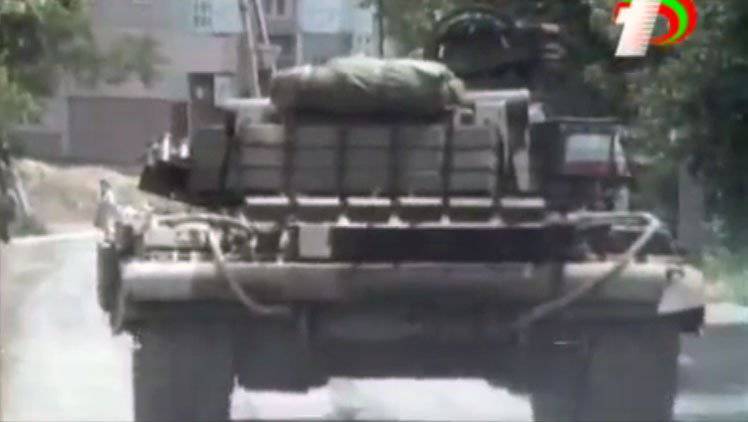 The disadvantages of this solution lie in the high probability of damage to the engine compartment system of the tank when the dynamic protection and anti-tank ammunition are activated together. 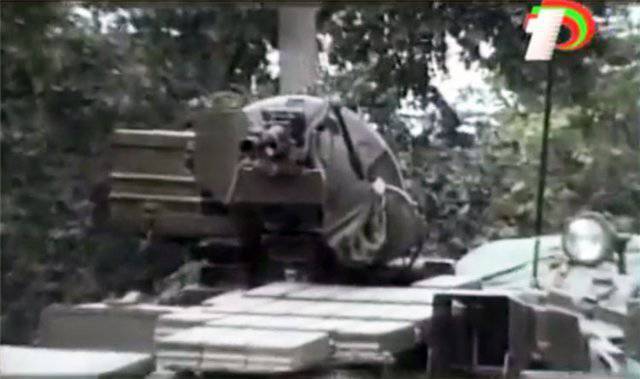 Another advantage of the T-64 - the presence of a closed (control from under the armor of the tank) machine-gun installation capable of firing on the upper floors of buildings, to provide protection against tank-dangerous infantry without leaving the armor protection. On the T-72 and T-80 the commander is forced to climb out of the tank to the waist, or even completely for firing from a machine gun installation. This is an extremely important aspect for conducting combat in the conditions of urban development.

And 2011 ………. Nine T-64BV tanks marched through the streets of the PMR capital Tiraspol.

T-64BV, as already mentioned, participated in just one war, but this is the tank that played the decisive role in it, the winning tank. 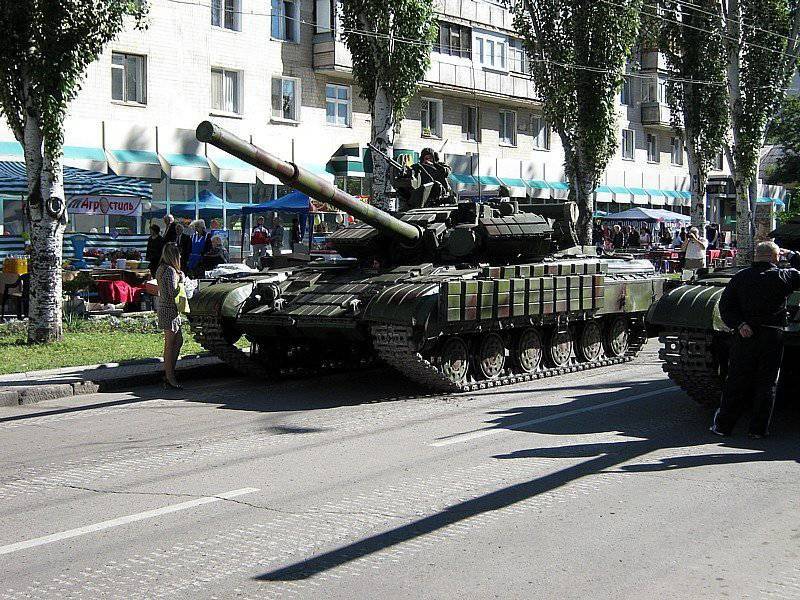 Note. I promised with the witnesses (participants) of these events both from the TMR and Moldova. Unfortunately, the data from them are very different, in many ways contradict each other. I very briefly tried to look at the events of those days on the basis of video analysis

(shootings of S. Skrypnyk, with whom I also communicated), data from the Transnistrian side. Unfortunately, a lot of things were simply forgotten by the participants, a lot of things were incorrectly estimated, I, at the same time, do not pretend that this material fully reflects the events of those days.

I treat both sides of those events with equal respect.

Ctrl Enter
Noticed a mistake Highlight text and press. Ctrl + Enter
We are
Bendery tragedy. Twenty-four years to the bloody events in TransnistriaCombat use of heavy tanks EC-3
39 comments
Information
Dear reader, to leave comments on the publication, you must to register.