15 May 2013
34
A well-trained sniper is a fighter who is very expensive, but the cost of his training pays for itself many times with a reasonable use of its capabilities. Since everything has always been around money, there is nothing surprising in the fact that training costs tend to reduce to a minimum, and ideally make it possible to use any soldier as a sniper. Half a century ago it seemed impossible, since it is impossible to simply take and improve a person’s skills without spending any time or money, the only option was to improve weapons, but here you can’t jump too far either, as a bunch of sniper rifle is determined by its effectiveness by the weakest parameter. So, the most beautiful and precise weapon in the hands of an unprepared person will not be able to show good results, just as the skills of a good sniper will be shackled by the low quality of weapons and ammunition. 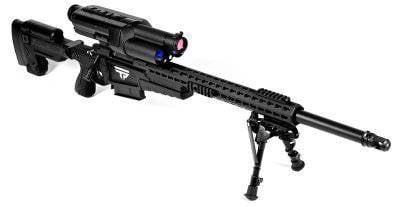 In principle, in order to just shoot a lot of mind is not necessary, but in order to shoot and hit at extreme distances, and even with high accuracy, you need to know a lot more than where the trigger is. Everything is completely taken into account, from the distance to the target to the humidity of the air, and all this must be either counted or replaced by a very great experience. With the development of electronics, the task to hit the enemy at great distances has been simplified, it got to the point that the scope itself made all the necessary corrections, and it remained only to catch the enemy in the sight and pull the trigger. However, this did not give everyone the opportunity to become at least an accurate shooter, since the enemy very rarely stands still and often moves fast enough. Unfortunately, the bullet also has its own speed and hit the target not at the moment of pressing the trigger, but somewhat later, in other words, in order to hit the moving target, it is necessary to make an amendment to the speed of its movement, and this task is not the most simple. 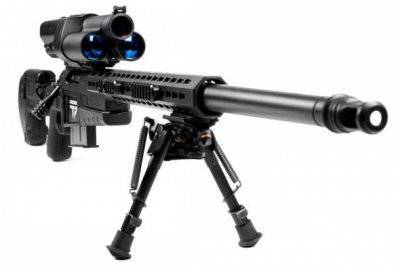 That was until recently, now, according to TrackingPoint, absolutely anyone can become a sniper. Honestly, I personally can’t believe that anyone who has two hands and at least one “working” eye will be able to accurately hit the enemy at long distances, but some points make you think that if not now, then soon it will become a reality. At CES 2013, the company presented its computerized sniper complex, capable of partially independently firing at the enemy, but still in the presence of a man.

The main essence of the development of the company is not so much in the weapon, as in the sighting device, which independently takes into account all the amendments that had to be done by an arrow, including the speed of the target, and can significantly facilitate the use of weapons. In order to understand the basic essence of the development, it is necessary to disassemble how the process of aiming and firing will now take place. First, the shooter points the weapon at the target and marks the selected target. The sight remembers the shooter's choice and waits for further command. After the shooter is ready to fire, he switches the weapon to combat readiness, but the shot will not happen until the shooter again points the weapon at the target. The shot happens automatically as soon as the weapon is aimed at the target. It is noteworthy that no amendments need to be introduced; it is enough to simply combine the target with the crosshair, as in most computer games, the corrector makes all amendments independently.

Here is such a technical progress in the field of firearms. At the moment, the company is going to release three versions of such weapons: one option for the .338 LM cartridge and two for the .300 WM cartridge. They promise the possibility of remote control for the iPhone and iPad, why is it not clear, you cannot turn the weapon remotely, and so on and so forth.

In general, it seems to me, such a device is good for everyone, except that it shoots on its own, whatever one may say, but this opportunity still needed to be left to the person, not the computer. Still, a person is not a machine and is not always ready to shoot. But if this weapon had been supplemented by a machine that could turn a rifle in the right direction, then remote control from a smartphone or tablet and an automatic shot when aiming at the target would have been in demand. And most importantly, then anyone could really confidently hit the enemy, because for that he would only need the skill to poke a finger at the touch screen. Although now the shooter will be required a minimum, namely sober so that his hands do not shake, although this electronics may well compensate.

Summing up, it should be noted that any innovation is useful, even if it shows that it is impossible to do this as done. In this case, I think, such a system is more relevant for weapons that do not have direct contact with the shooter. However, it is unknown how the development of weapons will continue; perhaps it’s true, soon a person will be needed only as a machine for a weapon, and all the rest will be done by itself, as described in many literary works. Indeed, a lot of things that the science fiction writers have described are already quite realistic, and sometimes they visit the idea that the designers derive their ideas from fiction.

And finally, about the financial issue. It is worth all this happiness will be about 17 thousand dollars, I think that depending on what kind of ammunition will be used, the price will not diverge much. According to the characteristics of the weapon itself, apart from information on the ammunition used, there is no data yet. It is hard to say whether it is worth it, but I think that the company would have had much more, even though this market was already occupied by others, but the TrackingPoint specialists would know better by simply producing smart sights that could be installed on most rifles. .