Georgian Zoya Kosmodemyanskaya, who did not betray the Crimean underground

14 May 2013
46
Many Georgians with weapons in the hands of the USSR defended, 136 of them were awarded the title of Hero of the Soviet Union.


Many warriors from Georgia were in units that landed in Kerch at the end of 1941. In 1942, the Georgian national divisions were created, which took part in the battles for the Crimea. In May, 1942, the Soviet troops were forced to leave the Kerch Peninsula. By the way, my grandfather, Ilya Nauyevich Ablotia, disappeared in the battles for Kerch.

The 224 Georgian Infantry Division (commander V. Dzabakhidze) covered the withdrawal of three Soviet armies. In these battles, most of the fighters and commanders of the 224 division were killed. The soldiers of Georgia participated in the landing operations of November 1943 of the year on the Kerch Peninsula, and then in the battles for the liberation of Sevastopol and the whole Crimea. Dozens of fascist soldiers were destroyed by a machine-gunner, Hero of the Soviet Union G. Samkharadze near Sapun-Gory. By moving his machine gun from one place to another, Samkharadze sowed panic in the ranks of the enemy troops, which enabled the soldiers of the 414 regiment of the Georgian Anapa division to quickly move forward and attack the approaches to Sevastopol.

Rear admirals M. Jincharadze and S. Kapanadze, Heroes of the USSR: V. Esebua, A. Kananadze, K. Kochiev, Z Khitalishvili, D. Jabidze, P. Tsikoridze, N. Beria, K. Khadzhiev, A. Chakriyan, V. Papidze, and others. Two regiments of the 414 Anapa division were named Sevastopol. Hundreds of brave men of this division fell in the Crimea, in particular, in street battles for Sevastopol. The soldiers of the 414 th Georgian division, who fell heroic death for Sevastopol, were erected a monument, on the pedestal of which an eternal flame burns. In the spring of 2009, it was destroyed by vandals, but then rebuilt. The 242 Mountain Infantry Division in Georgia operated in the Crimea. The soldiers and officers of this glorious division, led by Major-General V. Lisinov, fought valiantly until the final defeat of the German-Romanian occupiers in the Crimea.

In the battles for the liberation of Ukraine, tens of thousands of Georgian warriors became famous, many of whom were awarded high government awards. Of the 136 Heroes of the Soviet Union of Georgian Warriors, 62nd was awarded this title for the heroism and courage shown in the battles for Crimea, Dnieper, Kiev and Kharkov. In the area of ​​Melitopol, a senior sergeant, Komsomol member Avaliani exterminated dozens of Nazis, destroyed 3 enemy tankand then with a bunch of grenades rushed under the fourth tank and detonated it. More than 30 Georgian soldiers were awarded the title Hero of the Soviet Union for participating in the hacking of Dnieper enemy fortifications, forcing the Dnieper and occupying the bridgeheads on its right bank. Many of these heroes rest on the banks of the Dnieper, among them: A. Tereladze, V. Chkhaidze, B. Sordia, L. Chubinidze, V. Beroshvili and others. In Kiev, in the “Park of Glory”, Hero of the Soviet Union N. Gogichayshvili rests in a mass grave. 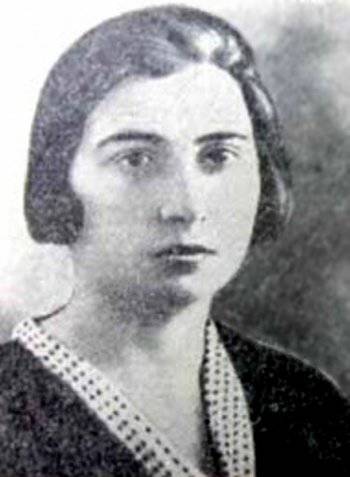 How not to recall the heroine of the Crimean underground - Zoe Rukhadze. As Georgians themselves once said: “You had a Russian heroine, Zoya Kosmodemyanskaya, and we also had Zoya, but Rukhadze ...”

Yes, in March 1944, a schoolgirl from Simferopol repeated the feat of Kosmodemyanskaya. She also went to a partisan detachment operating in the city, where she participated in the performance of combat missions. 10 March 1944 of the year after the explosion of a German arms warehouse, it was seized by the Gestapo. Tortured her cruelly, demanding to give out the names of the partisans, their plans. They brutally beat, broke both hands, gouged out eyes. Not having received a single answer to a single question, they threw the lifeless body into the car and took it to the outskirts of the city - to Dubki. Zoya Rukhadze was still alive when she was thrown into a deep well, where she died in unbearable agony.

Georgians participated in battles not only in the territory of the USSR, but outside its borders and glorified their Georgia. The symbol of their contribution to the victory of humanity over Nazism is Pore Mosulishvili, who died heroically in Italy, where he fought as part of a partisan detachment.

How not to remember also Irina Skhirtladz. She was Georgian by origin and lived in Poland. She was 15 years old and she fought against the fascists on the barricades of the Warsaw Uprising. Her feat was dedicated to the poem “Irinola” by the famous Georgian poet Jansug Charkviani.

And most importantly, the banner of victory over Reichstag was hoisted by Russian Mikhail Egorov and Georgian Meliton Kantaria.
Eternal glory to the heroes of the war!