PTR Rukavishnikov arr. 1942 of the year

14 May 2013
4
In a previous article about anti-tank guns, it was told about the Rukavishnikov anti-tank gun system chambered for 14,5х114, which, although it was adopted, was not widely disseminated. The designer did not stop there, and continued his work, creating a lighter and more compact sample. weapons, already single-shot and chambered for 12,7х108. And this weapon received the highest marks and was recommended for mass production. But 1942 was in the yard year, the actual ending of the short century of anti-tank guns, because the weapon did not spread, mainly due to low rates of armor penetration, that is, because of the cartridge. Despite this, the sample of the anti-tank gun, which Rukavishnikov proposed, is very interesting, which is noticeable even in the appearance of the weapon. I suggest to get acquainted with this work of the designer.

The appearance of the Rukavishnikov's anti-tank gun of the 1942 model of the year is indeed somewhat unusual, the weapon seems to be too light and graceful, which is not typical of an MFR. However, 10,8 kilograms and a half meters of length are hidden behind the external ease, but the opposite is not so much for a weapon chambered for 12,7х108. The anti-tank shotgun is single-shot, to compensate for recoil when firing, there is a muzzle brake-compensator of recoil, as well as a soft butt pad, which, in combination with a not very powerful cartridge, makes shooting relatively comfortable. In addition, the bipod located on the short receiver contributes to more convenient firing of weapons. The truth was one significant drawback, which consisted in throwing a weapon when firing, which reduced the accuracy of fire, even despite the free-hanging barrel. Aim devices are adjustable sight and front sight, the weapon does not have safety devices.

Much more interesting is the shutter of the weapon, which is not so often seen in such samples. The fact is that the piston valve. In other words, it is a part that folds down and has a butterfly valve in the center, locking the barrel bore on the 5 stops. To reload the weapon, you need to turn the reload handle up, unlocking the barrel bore, and pull it towards you. As a result, the handle will take a position parallel to the barrel of the weapon, and the chamber will be opened. Removing the cartridge case was carried out manually, for its protruding part, which appeared in the process of opening the bolt, although if the weapon was at an angle, then the sleeve fell out itself. A remarkable point was that the trigger mechanism of the weapon was the trigger. So, at the time of opening the shutter, the trigger of the weapon cocked, which became on the sear, in anticipation of the next shot. A new cartridge, again manually, was inserted into the chamber, after which the shutter was raised and locked by turning the handle to the right. Pressing the trigger led to the disruption of the trigger, and, consequently, the shot. 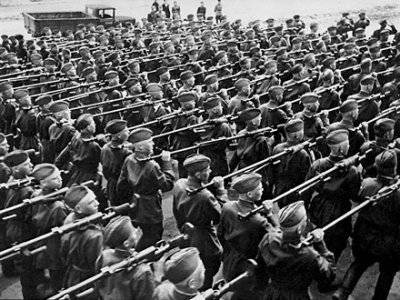 Separately, it was noted that this sample of anti-tank gun was much easier to manufacture compared to the PTP of Degtyarev, and it could easily be adapted to 14,5x114 cartridges, for which, of course, it was necessary to replace the barrel. An interesting point is that the practical rate of fire for a given single-shot sample is indicated equal to 12-15 per minute shots. Although it is difficult to believe that in five seconds in a rather hectic environment you can at least recharge, not to mention an aimed shot.

The Rukavishnikov anti-tank gun of the 1942 model of the year received a very high rating, and was recommended for mass production, which was not established. In general, a weapon could well be a success if it had been created a couple of years earlier. 1942 the same year was, in fact, the decline of a short century of anti-tank guns, and for firing at other targets, other than armored vehicles, the already created samples were quite enough and the new army did not need.