The Ministry of Industry and Trade destroys the best in the world Mig-31 interceptor? 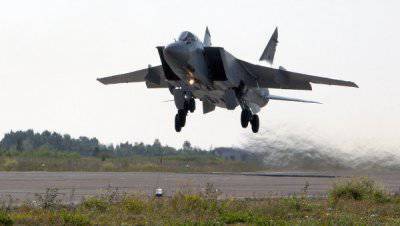 The most dangerous direction for hitting Russia with cruise missiles and aviation - northern. In Soviet times, the space from the Kola Peninsula to Chukotka was immediately covered by two air defense armies - the 14th (Novosibirsk) and 10th (Arkhangelsk). It housed dozens of airfields with fighter-interceptors, hundreds of anti-aircraft missile divisions and units of the Radio Technical Forces (RTV), which carried out continuous control of airspace over the Arctic Ocean.


Over 20 over the years of perestroika, everything collapsed. And now there is a hole in 22 600 kilometers. In the current situation, when there is neither financial resources nor industrial opportunities to create such protection, the State Duma Committee for Defense recalled the MiG-31. The maximum speed is 3000 km / h, 600 km / h more than the Su-27 and the American fifth-generation F-22 Raptor aircraft.

“The P-37 air-to-air missiles on the MiG-31 can hit any small targets at a distance of 300 kilometers (and the most long-range American missiles of the same Phoenix class are up to 160 kilometers). The airborne equipment, although outdated, still provides for the exchange of radio-electronic information between MiG-31 aircraft flying at a distance of up to 200 kilometers from each other. As a result, a group of four such interceptors can reliably cover the space up to 1000 kilometers from enemy aircraft and cruise missiles, ”Admiral Vladimir Komoyedov, Chairman of the State Duma Defense Committee said to Argumentam.ru.

According to the admiral, “a working ceiling in a kilometer 20-22 allows using this fighter against targets in near space, as well as using small anti-satellites into orbit. What makes the car very interesting for the Aerospace Defense forces being formed in the country. Not without reason, the codification of the NATO MiG-31 is Foxhound ("Fox Hound") ".

According to experts, after upgrading, primarily onboard electronics, MiG-31 interceptor fighters, even more than 10, will have no equal years in the world. Total MiG-31 various modifications were released around 500 pieces. Now there are 122 cars left on the wing. The command of the Air Force in the framework of modernization is trying to create a completely different class of vehicles from fighter-interceptors - the front bomber. And to intercept leave Su-27 and Mig-29. Both of these machines are significantly inferior in the range of interception "hound."

- In Soviet times, I on the MiG-31 participated in exercises over the Arctic Ocean. Together with me there was also a Su-27 fighter and an A-50 long-range radar patrol aircraft. Opponent designated strategic bomber Tu-95, flying from the pole. A-50 gave me targeting. I made an interception shot at maximum speed. And those who did not beat me, finished off the Su-27. Therefore, it is not necessary to oppose one type of fighter to another. Each has his own task, says Honored Test Pilot, Hero of Russia Roman Taskaev.

It is clear that the Air Force is just pulling time, because soon there will be horns and legs from the MiG-31. According to the State Duma deputy, twice Hero of the Soviet Union Svetlana Savitskaya, the Ministry of Industry and Trade has already sent an order to the Nizhny Novgorod plant Sokol signed by Minister Manturov to 2013 to dismantle the MiG-1993 production line stopped in 31.

American experts have already said: “The Russians themselves pulled out their fangs from the foxhole.”

Ctrl Enter
Noticed a mistake Highlight text and press. Ctrl + Enter
We are
Air Force and Air Defense of Ukraine: what was and what was leftWays to build the East Kazakhstan region
53 comments
Information
Dear reader, to leave comments on the publication, you must to register.