And again the area. Manezhnaya Square 11 December, Independence Square (Independence Bel.) 19 December. And again, thousands of people who want to change, and again riot police, special forces of internal troops, someone again, once again for the whole history humanity is provoked by the crowd, and everything is brutally suppressed by the police, which has a formal reason to beat, indiscriminately, without thinking, as taught. Sheer deja vu, only the country is different and the reason would seem to be weightier.

Yesterday I watched a report from the opposition Belarusian website 97 Charter, read the materials, watched photos and videos, and I was uneasy. Probably because Belarus is not a foreign country for me. I had a girlfriend from there, it so happened that the love passed, but the friendship remained. I was in Minsk as early as this spring, I walked around this square (the most surprising is that its architectural design is somewhat similar to Manezhnaya), I looked at the wonderful Church of Saints Simeon and St. Helena (Red Church), there were demonstrators standing by it yesterday, I saw the Government House. This classic Stalin-style building, built in 1934, survived the German occupation and was restored after the war. And yesterday, someone from the crowd tried to break into this building, broke windows, broke down the door, who it was - provocateurs or heated oppositionists, no one will say now. The action was doomed initially, and inside the building and around it was concentrated in advance by the riot police, who, when required, squeezed the people from the square. I especially remember the episode with the police lieutenant, who was with the demonstrators, with a broken head, he was yelling at the special forces: "Are you idiots?" 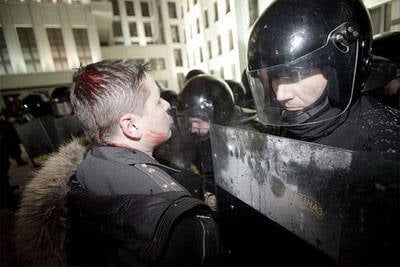 While I was watching the development of events on the square, Internet censorship was launched in Belarus. The websites of the Belarusian opposition media, the same “Charter 97”, “Belarusian partisan”, the site of the newspaper “Solidarity” were closed for Belarusians. There was no access to the social network Facebook, the Twitter microblogging network, LiveJournal blog hosting site and even the Gmail mailer did not work. I spoke with a friend, she confirmed that there was no access to these resources. The authorities were afraid of covering these events, they were afraid of publicity. Students were obliged to vote ahead of time, intimidating to problems with their studies. Nonresident students in Minsk were evicted from dormitories for the weekend, so that God forbid they didn’t come to this square, they didn’t shout “Have Belarus!”

What depresses me most is that I do not know where I would be if I were a Belarusian. I would go to the square or sit at home and condemn the antics of these “Westerners” who waved the flags of the European Union. Belarus is our all, this is some kind of outlet for those who feel nostalgia for the USSR that passed into non-existence. Who knows, maybe this would be exactly what Russia would have looked like if our history had taken a different path.

The last dictator of Europe, even if they call Lukashenka that way, but I am sure that he won the elections, it’s all a matter of percentage that I don’t believe almost 79%. In that scored the necessary to win - completely. Maybe this is a dictator, but Belarus has its advantages, which, it seems to me, are more important for a simple man in the street, although where is the line when you can decide which is more important.

Belarus is a country of contrasts. Having stayed there quite a bit, you notice that the roads are roads, there are no holes in them, regulated by the Guest. Public transport 7 rubles - all, including the subway, compare with the prices in the Moscow metro, a trip in which from the new year will cost you 28 rubles. Products are cheaper at least on 1 / 3, although I was not looking for where I bought cheaper, where it was more convenient. Visiting the State Museum of the Great Patriotic War - 20 rub. with photographing, funny money. And at the same time, in February this year a law was passed on censorship on the Internet, which put Belarus on a par with Iran, China, and the DPRK. In order to sit in an Internet cafe from July, you must show a passport. For students, there is a mandatory distribution on the 3 of the year, when you are guaranteed to be provided with work, but at the same time they can be placed in absolute Tmutarakan without asking for consent. 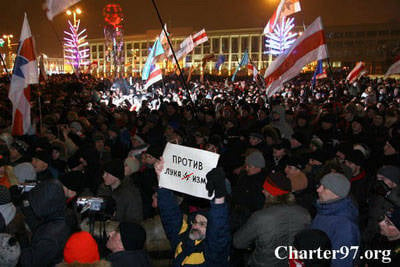 Belarus is a country where on the street in Minsk you will not meet “those who come in large numbers”, this is the country's migration policy - try not to attract citizens from poorer countries. This is a country where I did not meet a single person in police uniform on the street, only traffic police officers near the embassy buildings and passing patrols on cars. After Moscow, which is in perpetual fear of terror and crime, this is especially evident. At the same time, journalists disappear without a trace in Belarus, opposition publications are being closed, and 7 from 9 opposition representatives from among presidential candidates were detained yesterday.

In Belarus, casinos that have gone underground in Russia work quite legally. And if, for example, in Mogilev these are just slot machine halls, then in Minsk there are luxurious establishments with shining signs. Well, how they like sport in Belarus? The wonderful complex “Minsk-Arena”, the largest hockey ground in the KHL (for 15 000 spectators), and in addition to that the indoor skating rink and the velodrome, not inferior in size to the central arena. Against this background, a running OMON that beats people out of the crowd indiscriminately, this is on the video. These are law enforcement officers who beat presidential candidate Vladimir Neklyaev, the national writer of the republic.

Where is the line when a person decides to go to the square, almost surely knowing that the demonstration will be dispersed. I am not ready to answer this question. But I love this original state, including because I am not happy with much in ours. How good it would be to combine the best that is in our countries, but this is utopia, non-fiction. Therefore, there and there people will continue to go to the square, who knows, maybe I will be in the square someday.