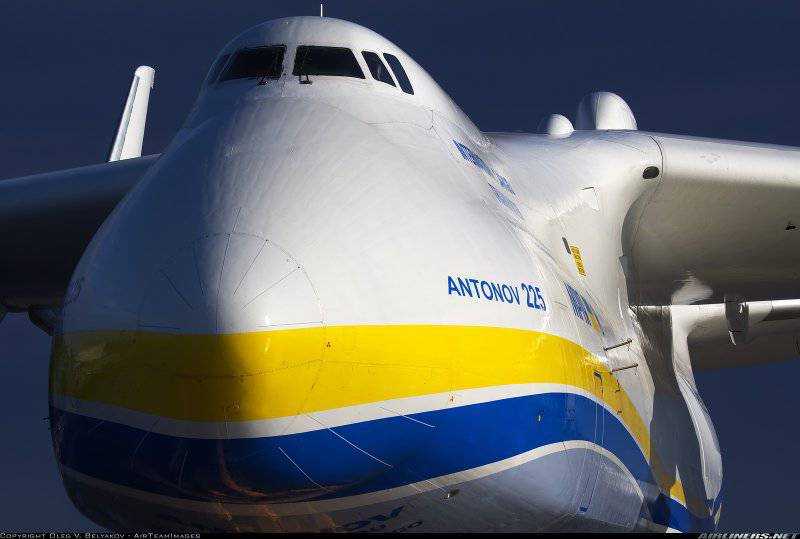 An-225 transport aircraft has not flown into the sky since May 2012. The largest transport aircraft in the world was chained to the empty airfield of Gostomel Airport, northeast of Kiev. And when in the autumn of the same year, activity around the plane began to boil again, the real sky giant turned out to come from another era. The aircraft is equipped with six engines, its fuselage length and wingspan is longer than that of the Airbus A380, and it can carry a huge payload: up to 250 tons of cargo can be loaded into a giant transport compartment. For comparison: the newest Boeing 747-8F transport aircraft can lift only 140 tons. The maximum take-off weight of the Airbus A380 is 560 tons, and the An-225 - 630 tons.


An-225 was developed in 1980-ies. in the era of the Cold War for the transportation of the Soviet spacecraft "Buran". "Buran" never flew into space (as in the text - Periscope 2), but today it can be seen in the Museum of Technology Sinsheim (Germany). However, for An-225, a new role was prepared as a carrier for oversized cargo, and subsequently this behemoth among the aircraft was again lifted into the air.

According to the pilot Dmitry Antonov, about the last task, said during a visit to Air International Gostomel Airport, “we transported a working blade for a wind turbine to Dushanbe, and it can only be transported as a whole, and only on board the An-225!”. Despite his last name, Dmitry is not related to the general designer Oleg Antonov. However, he is the chief pilot and head of the fleet of transport aircraft of Antonov Airlines, which operates An-225 from the airfield of Gostomel.

The aircraft works in the interests of various customers who want to transport expensive cargo, and thus it rarely uses its full load capacity. “A few years ago we downloaded five tanks weighing 48 tons each in order to achieve maximum load, but it was only once, ”recalls Vitaliy Shost, who is responsible for the operational activities of Antonov Airlines. An-225 still retains several records. In 2004, he flew from Prague to Tashkent with a cargo mass of 247 tons for the pipeline. Then, in 2009, he moved the 190-ton generator, the largest in stories airborne solid object from Frankfurt to Armenia.

According to Konstantin Lushakov, executive director of Antonov Airlines, “our clients pay large sums for An-225 flights”. According to him, “in 2003-2004's. during the war in Afghanistan, the aircraft was constantly in business. " Today, An-225 flies less, once or twice a month, provided that things are going well. About a third of the work is related to military contracts. “With 2011, the global financial crisis has affected us,” says Lushakov, about a modest order book of his flagship aircraft. Although An-225 made its first flight in 1988, from a technical point of view, the “Mriya” is still a young aircraft. According to Lushakov, “we have slightly overstepped for 1000 take-off cycles, and the flight time is 5000 hours. And the aircraft's assigned resource is 24000 hours. ”

Somewhere on the territory of the huge plant of Antonov Design Bureau in Kiev there are parts stored for storage and packed in containers for the second unfinished copy of the An-225. However, Lushakov destroys any fantasies regarding expansion fleet transport aircraft: "it will never take off, we cannot fully use even one aircraft."

The commercial appeal of An-225 differs from that of its “younger brother” An-124 “Ruslan”, on the basis of which An-225 was created. The four-engine An-124 was designed as a strategic military transport aircraft for the Soviet Air Force, the first flight was made in 1982, after 10 years the aircraft was certified for the transport of commercial cargo. Thanks to the huge forward-up front ramp, as well as a massive tail ramp, the An-124 is the best option on the global market for oversized cargo. In this category, An-124 is a monopolist and performs various flights - from humanitarian missions after natural disasters to charter flights with large cargoes, for example, locomotives, to support military operations. Before 2003, approximately 50 An-124 was released. Some of them fly the flag of the Russian Air Force, and 26 belong to five civilian carriers, and the Antonov Airlines has seven such cars.

According to Vitaly Shost, only two of them are now in flying condition. Others undergo large-scale repairs and upgrades, which take about two months for each aircraft. “We are carrying out the modernization of the An-124, since the aircraft has been operated for 30 for years,” said Konstantin Lushakov. Both auxiliary power units on board each aircraft are replaced, as well as some structural elements that were damaged or weakened during the transport of heavy loads. “We, as a designer and manufacturer of the aircraft, first implement these improvements on our aircraft, and then recommend them to other carriers,” adds Lushakov.

Operators have a vested interest in maintaining the airworthiness of their aircraft. According to Lushakov, “there is a large market niche for this unique aircraft. Demand constantly exceeds cash capacity. The cause is globalization. ” While the annual growth rate of passenger traffic is 4-5%, the growth in freight traffic is 6-7%, the oversized cargo market served by An-124 is growing by 11-12%. A few An-124 civilians engaged in NATO operations are based at major airports like Leipzig / Halle in Germany.

Each An-124 raid reaches from 14000 to 24000 hours, Lushakov comments on these figures in the vein, that "nothing compares to the raid of passenger aircraft." The originally assigned An-124 resource was set at the 24000 clock level, but according to Lushakov, “we decided that the An-124 has the potential up to the 50000 clock and we are gradually increasing the resource in“ steps ”in the 4000 clock”.

Vitaly Shost shows a dimple in the huge An-124 fuselage undergoing maintenance. This space is located high and hides the fairings through which the plane enters the fuselage. The bridge points to the dark compartment behind it, from which you can see the center section, which passes through the main compartment. It divides the compartment into two halves, the front cabin rest of the crew (immediately behind the cockpit), which can take up to six people, and the rear passenger cabin, which can accommodate up to 20 accompanying cargo and other crew members. The most unexpected discovery was hidden in the tail section. Inside the keel there is an aluminum staircase in full dark leading to its very top. “There is an antenna that technicians can service without using additional equipment,” explains Shost. In the Soviet army, practical thinking was required, as evidenced by the emergency passage, which, if necessary, allows you to jump with a parachute from the pilot's cabin.

According to Konstantin Lushakov, “twenty-six civilian An-124 is not enough.” Talk about resuming the production of Ruslans has been going on for a long time, but Lushakov notes that "the decision has not yet been made." This will be a global project, both from a financial and technical point of view, since, for example, all the necessary equipment for the production of a center section from a solid aluminum billet has been destroyed. According to Lushakov, "in Kiev, we can only design a new An-124, and the production and assembly should lead the plant in Ulyanovsk." We are talking about the Aviastar-SP enterprise, which is part of the United Aircraft Building Corporation, and where in the future Ruslans will be produced in any form. However, demand is needed. According to Lushakov’s calculations, “the prerequisite should be the order of 20 airplanes by the Russian Ministry of Defense, and I expect an order from 20 to 80 vehicles from civilian operators”. Only one company, Volga-Dnepr, announced its interest in purchasing at least 40 aircraft. According to Lushakov, “the design and aerodynamics of the new An-124 will remain almost the same as on current machines, but 80% of the onboard systems will be new.” Chief pilot Dmitry Antonov already knows his dream. The wish list for the An-124 of the new generation includes a "fully digital" glass "cockpit, a crew of up to three or four people, more efficient engines and improved hydraulics."

Ctrl Enter
Noticed a mistake Highlight text and press. Ctrl + Enter
We are
Saving "seven hundred and forty seventh"Petr Butovski on An-124 "Ruslan"
71 comment
Information
Dear reader, to leave comments on the publication, you must to register.