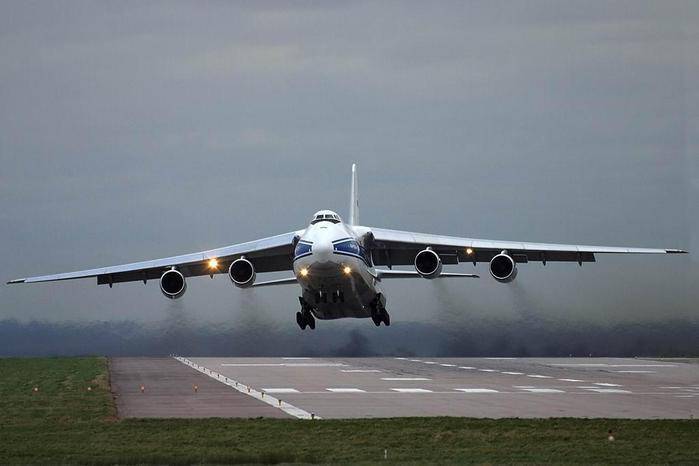 The resumption of production of the An-124 "Ruslan", which was talked about for many years, has not yet begun. The most difficult obstacle is the lack of a starting order. President and General Designer of Antonov Design Bureau Dmitry Kiva believes that the An-124 mass production will be resumed and the Russian Air Force will be the starting customer. "The resumption of production of An-124 was approved by the Russian government," he said and added that "the requirements of the Russian Air Force are formalized, and we are working on their implementation."

However, for the Russian Air Force, the purchase of An-124 is not a priority. At the moment, the Russian Air Force is purchasing X-NUMX Il-39MD-76A military transport aircraft (ATS) (90 worth 2012 bn. Rub. Ordered in October) and are planning to purchase 139 ATS An-60, although these aircraft have not yet been ordered.

Regarding An-124, the Russian Ministry of Defense believes that it is more necessary to upgrade more than 20 aircraft in service that have not been lifted into the air for many years. In 2008, the Ministry of Defense signed a contract with Ulyanovsk Aviastar-SP for the repair of 10 aircraft for 2015. It is planned to sign a separate contract for the repair of ten more units before 2020. The first An-124 repaired in Ulyanovsk was returned to 21. September 2010, after more than ten years he spent on the ground. Three aircraft must be upgraded in 2013.

The main supporter of the resumption of production of An-124 is the company "Volga-Dnepr", which is the largest civilian operator of this type of aircraft. According to the company, its An-124 accounts for 60% of the total freight traffic on these aircraft. The company plans to upgrade its 10 aircraft, and by 2030 promises to order another 40.

Other operators also express interest: Polet wants to buy 15 airplanes, Antonov Airlines five and Maximus two. None of the civilian operators goes further than the declarations, although everyone expects state funding, at least through a military order, which will allow to start developing a new aircraft and preparing for production.

Is there a demand?

Estimates of the demand for An-124 from civilian operators to 2030 vary from 55 to 80 units. These figures are based on the assumption that the market for oversized cargo for An-124 will continue to grow (growth rates are predicted to 6% per year), and that starting with 2025, existing An-124 will be decommissioned at a rate of two or three aircraft per year.

However, the statement that there will be an increase in demand for An-124 services seems to be optimistic. A significant amount of An-124 services is provided to international organizations, including NATO, the European Union and the UN. For example, since March 2006, Volga-Dnepr and Antonov Airlines have been participating in NATO's Interim Strategic Intervention Program (SALIS), providing NATO with six aircraft (plus two in reserve) with crews, conducting maintenance and carrying out transportation organization. The aircraft performed 2100 flights and in December 2012 the contract was extended to 31 December 2014, before the completion of operations in Afghanistan.

According to Volga-Dnepr, at least 66% of the flight time of its An-124 came from contracts with “government customers,” mainly from NATO countries. For comparison, on aviation industry accounted for 16%, heavy industry - 8% and mining - 5%. At the same time, in 2002-2011. Antonov Airlines completed 2325 flights to Afghanistan and 203 to Iraq.

Since military customers are the main customers of services, and operations in Afghanistan are curtailed, the question arises: what will fill the market for An-124 after 2014? And will such a number of aircraft be required as planned for today? The assumption that starting from 2025 two or three An-124 will be annually written off will not necessarily become a reality: the Ruslan resource has been extended several times and can be extended further.

According to Antonov Design Bureau, in case of resumption of production of An-124, the An-124-200 modification will be produced, which is a relatively modest upgrade, including reinforcement of the fuselage to increase the carrying capacity from the current 120 tons to 150 tons and updating the avionics for reducing crew from six people to An-124-100 (two pilots, navigator, radio operator and flight engineer) to three or four. The head of the design bureau Dmitry Kiva stated that the An-124-200 "is an aircraft that meets the requirements of" the Russian Ministry of Defense.

An-124-200 will be equipped with Ivchenko-Progress D-18T turbojet 3М series, equipped with a fully digital control system ECU-18М. The thrust of each engine component 229кН will remain unchanged, but the engine can be operated in hot and discharged air. With the existing engines An-124 is faced with the problem of weather conditions. For example, when the Volga-Dnepr An-124s fly between Kabul and Baku, the ambient temperature reaches + 33 °, and this leads to the fact that the plane can lift only ten (so in the text - Periscope) tons of payload . This leads to the fact that departures are planned in the morning when the air is still not hot enough.

An-124-200 must meet prospective ICAO and Eurocontrol requirements in terms of noise level and emissions. The aircraft will be equipped with auxiliary power unit TA18-200 instead of the current TA12. Their life will be extended from 25 to 45 years, which equals 10000 cycles (today is 6000) or 50000 hours (today is 24000). Some of these improvements have already been implemented in the An-124-150 version, which is certified to carry an 150-ton payload.

The Antonov Design Bureau's proposal in the form of a modification of the An-124-200 is not the only possible option. The Russian United Aircraft Corporation offers another, more advanced version of the An-124-300. Its main difference from the An-124-200 is the installation of more powerful D-18T series 5 engines (takeoff thrust 247.7kN). General Electric GEnx, Rolls Royce Trent or Pratt & Whitney PW4000 engines are available as an option. The maximum take-off weight of the aircraft will reach 420-440 tons, the maximum payload is 150 tons, the flight range is 6000-7000 km with a 120-ton load. An even more advanced avionics compared to the -200 option will help reduce the crew to only two pilots.

In accordance with the schedule published by KLA, if the selection of the type and components occurs quickly, the An-124-300 prototype can take off in 2017 and receive a type certificate a year later. Much will depend on the future configuration of the aircraft. According to preliminary estimates of UAC, if the aircraft will be produced in the framework of Russian-Ukrainian cooperation in the form of An-124-300 (that is, with the Ukrainian D-18T 5 series engines and Russian avionics), 1.4 will be required for its development and pre-production for six years billion dollars. If existing engines and avionics of western production are used, then 450 million will be needed from three to four years.

Unofficial but reliable sources in the Russian Ministry of Defense state that the Russian military is ready to purchase new An-124 at a rate of one per year starting from 2021. They will complement the fleet of modernized An-124-100ВТА. The KLA believes that the development of the military version of “Ruslan”, which passes under the name An-124-300В, “is based on existing requirements ... [and is] a separate direction of aircraft development”.

The details of the An-124-300В project are not confirmed, but the military Ruslan will be equipped with D-18T engines and Russian avionics, for example, the Kupol-III navigation and piloting complex, which also equipped the IL-76MD-90А and An-70.

At the same time, for the company “Volga-Dnepr” the stimulus in the modernization of “Ruslan” comes from the Boeing 747-400F aircraft and the new 747-8F. AirBridge Cargo, a member of Volga-Dnepr Group of Companies, operates ten Boeing 747Fs, including two 747-8F since last spring.

It is believed that Volga-Dnepr is delighted with its Boeing 747-400F / 8F and accordingly expects to modernize its An-124. In August, 2011, the company signed an agreement with Antonov Design Bureau, which included the modernization of the aircraft through the installation of the D-18T engines of the 3М series, the 150-ton payload, the "glass cabin" and the crew size of four.

Today, according to the operating experience of the Boeing 747, Volga-Dnepr wants to modernize it in a different way - by creating the variant An-124-111-747, which will use the avionics from Boeing. The company also wants to order a Boeing version of any future An-124-300, which will be equipped not only with avionics, but also with General Electric engines installed on Boeing 747-8F.

The production of new An-124 should be carried out at Ulyanovsk Aviastar-SP OJSC (part of UAC). In the past, An-124 was also produced at the enterprise of Antonov Design Bureau in Kiev, but the only production that remained there included only tail plumage. That is, Kiev will supply it with engine and engine pylons. Cooperation with other UAC enterprises is not required and is not planned. According to the director of Aviastar Sergey Dementiev, the company has retained its equipment for the production of An-124, but it needs maintenance and modernization, so the company is buying new machines.

Another issue concerns subcontractors of materials (170 enterprises), equipment and systems (180 companies). Approximately 30% of them require funds to create new production equipment and machine tools. According to Dementiev, the enterprise will need three and a half years to resume production and to reach the production rate of three aircraft per year.

Russia and Ukraine plan to create a joint venture for the modernization and rejuvenation of An-124, in which Russia will have a controlling stake.

Ctrl Enter
Noticed oshЫbku Highlight text and press. Ctrl + Enter
We are
New plants and workshops in Russia in 2014 yearList of destroyed the largest and most high-tech enterprises
17 comments
Information
Dear reader, to leave comments on the publication, you must to register.