Nazarbayev, the destroyer of the USSR, will never become a creator 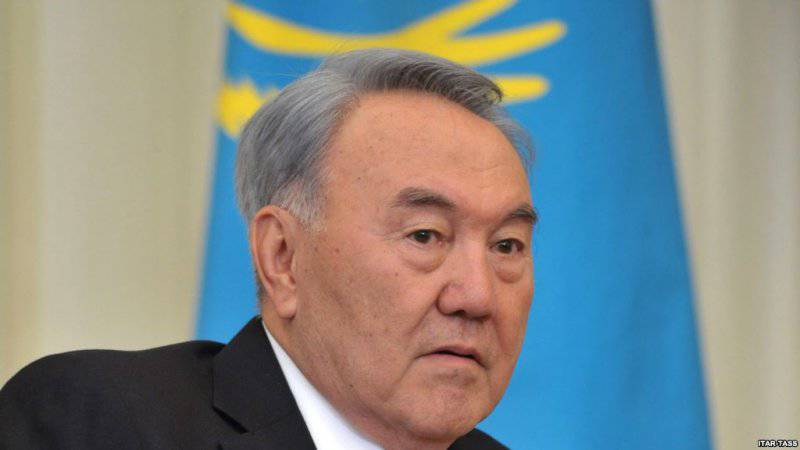 
It's a shame to admit it, but it seems that the realities of the Russian-Kazakh relations are becoming more and more confident in the picture that is unpleasant for Moscow: Kazakhstan is objectively more necessary for Russia than vice versa. After all, Russia is the locomotive of this “idea of ​​the century” - the Eurasian Union. Astana, on the other hand, supports this idea, as the analysis of recent events, obviously unfriendly to Moscow, shows, rather declaratively.

Indeed, if one observes the actions of the Kazakh authorities, one can only be amazed how this can be combined with the status of an economic and political ally, how a country that is a member of the Customs Union with Russia and is a “co-founder” of the Eurasian Union can do this. Meanwhile, official Astana requires Moscow to “pack suitcases” at Baikonur, clearly does not oppose the prospects of a referendum on secession from the Customs Union, which local nationalists dream of, does not overwhelm those who want to significantly limit the circulation of the Russian language and, finally, does not rule out switching from Cyrillic to Latin . All such initiatives and plans for the future are declared almost completely without any reservations on the position of Russia. The authorities of the republic at every opportunity seek to emphasize its exceptional sovereignty.

Without exaggeration, the mass exodus of Russians from this country can be considered a true indicator of negative anti-Russian tendencies in Kazakhstan’s domestic policy. You can even safely use, if not too politically correct, but in this case, just the correct verb "run." That's right: as soon as Moscow had declared the program of resettlement of compatriots - it was here that all the most interesting began. An amazing (then - for some, now - for many) truth has opened: the Russians in Kazakhstan seemed to be waiting for this opportunity. Statements to the Russian authorities with requests for citizenship were an avalanche. You do not need to be a medium to unravel the main essence of such a mass mood. Of course, there is a longing for the Motherland, although the request is also served in no small numbers by those Russian Kazakhstanis who have lived their entire adult life outside of Russia. But it is getting harder and harder to become Russian in Kazakhstan - and not at all because of the gnawing grief over the sources. Everything is more prosaic. Astana does not get tired of reminding them: “You are strangers”.

Such, you see, the “Eurasian Union” is looming.

Meanwhile, the mass exodus of Russians from Kazakhstan is fraught with danger for the entire project of the Eurasian Union. Yes, Vladimir Putin and Nursultan Nazarbayev can meet and solemnly sign as many pacts as necessary for mutual integration, but only how will they work in this situation and what will their price be? “The very discussion of the usefulness or risks of the outcome of Russians and Russian-speakers from anywhere means that the Russian state fixes for itself the meaninglessness and the impossibility of building a new large state - the Eurasian Union,” Alexander Sobyanin, head of the strategic planning service of the Association for Border Cooperation, told the REX news agency. . Well, how can you argue?

Of course, in world politics there have always been a lot of theater and theatrical conventions, but Vladimir Putin, in his speeches and articles, repeatedly reminded us all that the Eurasian Union is a serious project to which serious resources are attracted. So is it not insulting to be so ridiculous to say goodbye to a great idea?

In a conversation with a KM.RU columnist, senior researcher at the Russian Institute for Strategic Studies, political scientist Azhdar Kurtov revealed the initial motives of the unfriendly policy of official Astana against the backdrop of a declared readiness for Eurasian integration:

- From the very beginning of voicing the idea of ​​building the Eurasian Union, I had serious doubts that some of our partners would sincerely support it. Why such doubts have the right to exist? Because the destroyers can not be creators, as I believe. Those people who destroyed the USSR at the end of the 80 and the beginning of the 90 of the last century, hardly changed their views. After all, the main merit they ascribe to themselves is the creation of nation states, that is, the destruction of the Soviet Union. So can a person who destroyed, suddenly “overhang”, reconsider his views and act in the opposite direction? Most likely, this is still slyness, even if these people declare their intentions.

In addition, from my point of view, we still do not quite correctly assess the causes of the collapse of the Soviet Union. The main reason is in the selfishness of national elites, in their desire to have full power. Power, I remind you, then, during the transition from a planned economy to a market economy (with unlimited power), they provided extremely wide opportunities for enrichment. That is, they sought not just the possession of power, but the possession of just such a power that would allow them to control the mechanism of property distribution, its privatization in their own interests, in the interests of their family, the clan. And there are plenty of examples, including in Kazakhstan. Yes, under the Soviet regime there were also the first secretaries of the Communist Party, but their relatives did not have such fabulous states as the relatives of Nazarbayev now possess. But why on earth? This all happened not because of their exceptional intellectual or business abilities, but because of their kindred closeness to the first person of the state, who determined the policy of his country.

Why, even then, at the first wave of independence, did the first big wave of Russians leaving Kazakhstan leave? Because such was the policy of the Kazakh authorities, who did not want to share their power with politicians belonging to another ethnic group, with Russians, Tatars, and Ukrainians. They wanted monopolies and passed relevant laws: for example, a law on language, knowledge of which was necessary for applicants for landmark posts in the system of state administration. And so they squeezed the Russian population out of their republic. I am already silent about the fact that at the beginning of the 90-ies, the Kazakh authorities blocked in a discriminatory way the associations of various Russian organizations, in particular, the Cossack organizations, stopped attempts to consolidate forces that defended the development of relations between Kazakhstan and Russia. But already then the myth of Nazarbayev as the “main integrator” in the post-Soviet space was launched. But only by further actions of Nursultan Abishevich this was not confirmed in any way.

Ctrl Enter
Noticed a mistake Highlight text and press. Ctrl + Enter
We are
Nikolay Silaev, Andrei Sushentsov: Georgia after the elections and prospects for Russian-Georgian relationsAstana should become the capital of the Eurasian Union: Nazarbayev’s reply to Putin
114 comments
Information
Dear reader, to leave comments on the publication, you must to register.