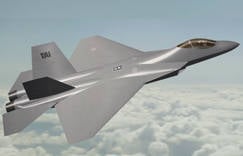 At the international defense exhibition held in Istanbul these days, the Turkish company TAI (Turkish Aerospace Industries) presented three projects of the new TFX fighter. The initial design program of the fighter should be completed this year.


The images are drawings of three aircraft concepts - single-engine with front horizontal tail (“duck” scheme) and without, and twin-engine in the normal aerodynamic scheme (on the photo). Currently, the Turkish Air Force and TAI are discussing these three concepts.

At the end of September a meeting will be held on the selection of one of the submitted projects. TAI is working on this program together with the Swedish industrial group SAAB.

The first flight of the fighter is scheduled to take place in 2023g. The TFX can replace the Lockheed Martin F-16C fighters in service with the Turkish Air Force.

As written in early February 2013. Turkish media, a brainstorming group identified the basic principles and characteristics of a promising combat vehicle.

Of the six proposed conceptual models of the Air Force, three have been selected, work on the design of which will continue until the end of the year, after which the proposals of the designers will be submitted for approval to the Secretariat of the defense industry. Specialists face a difficult task - to predict the level of technology development in 2030. in order to create a modern competitive aircraft.

Engineers and military experts believe that after 2030, the air link will consist of one fighter with a pilot and four unmanned aerial vehicles (UAVs). At the same time developed a version of the fighter with two pilots. One will be responsible for controlling the combat vehicle, the second pilot will control the UAV. It is assumed that in the 30-ies of the current century, it will be possible to effectively block the communication of unmanned aerial vehicles with ground command posts, so the issue of controlling these devices directly in the air will become topical.

Experts suggest sheathing the hull of fighters with armor based on boron compounds. Such armor has been used for quite some time, and in the USSR, studies of the properties of this chemical element began as early in the 1970s as the basis for booking military equipment. Boron, according to Turkish engineers, provides a number of advantages in comparison with other substances. Boric armor is lighter, has sufficient density and provides adequate protection. It withstands high temperatures, which allows you to book the engine. In addition, the composite armor with boron content creates the effect of the object invisibility for radar.

The choice in the direction of the use of boron is not accidental. According to experts, 72 percent. world reserves of boron are located in Turkey. This amount is enough to meet the needs of the whole world in this element for 450 years.

A separate problem for Turkish specialists is the engine. Developing a jet engine from scratch will take about 30 years. For this reason, the first Turkish fighters plan to install imported engines, while simultaneously developing domestic ones. "Haber Turk" notes that Turkish developers are going to negotiate the purchase of engines from the largest manufacturers from the US, Europe and Russia.

But in contrast to the power plant the radar on the fighter may well be domestic. Local defense enterprises have already “filled their hands” and offer armies competitive technologies. Modernization and procurement of military equipment by the Turkish army takes place precisely with the condition of the maximum possible equipping of machines with domestic nodes and systems.

Ctrl Enter
Noticed oshЫbku Highlight text and press. Ctrl + Enter
We are
Lockheed Martin is preparing a revolution in energy. Russia does not believe in itIn search of a national idea: a project for choosing the main symbols of Russia
Military Reviewin Yandex News
Military Reviewin Google News
19 comments
Information
Dear reader, to leave comments on the publication, you must to register.