13 May 2013
94
The Victory Parade, which took place on 9 in May of 2013, caused a positive assessment of the majority of, say, sober-thinking Russians. Returning to the parade of pupils of Suvorov and Nakhimov schools, providing an opportunity to demonstrate their bearing to young Cossacks-Aksais from the cadet corps of the Rostov region, using the historical name of the Preobrazhensky regiment, standing (not sitting in chairs) during the passage of parade columns on Red Square technology. All this and the very atmosphere of solemnity honoring the veterans of the Great Patriotic War could hardly be left indifferent. However, an indifferent assessment of the Russian public, as, however, and usually (in recent years), turned out to be very diverse. It’s good or not to judge each specific reader of the material and the viewer of the Moscow Victory Parade separately. 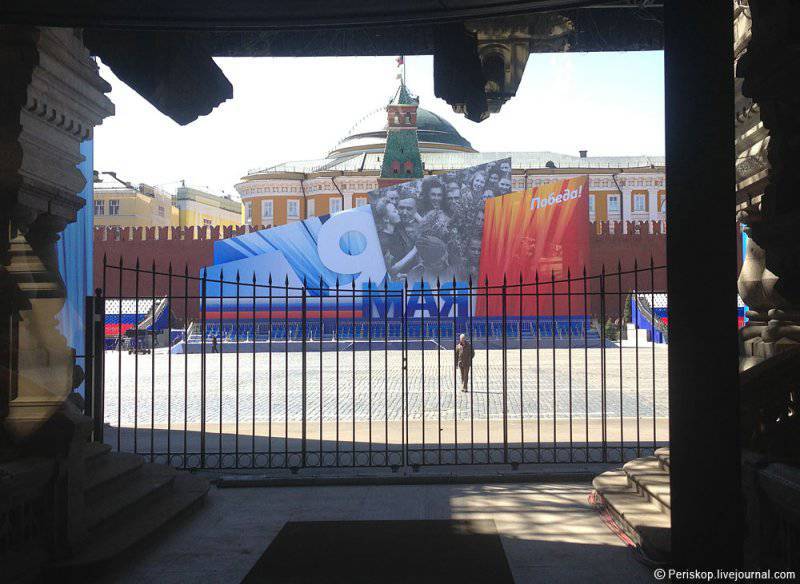 With all the wealth of positive assessments that the Russians, let us say, presented in relation to the Moscow parade, there are some reflective thoughts about, excuse me, the state of mental health of a certain part of Russians. On the one hand, we, seemingly, have no right to obstruct the points of view of those people who saw in the Victory Parade another manifestation of a certain anti-people negative, but on the other hand, keep obviously destructive publications of certain citizens actively using open spaces of Internet resources and so-called deliberately liberal media, in this case is hardly appropriate.

As always, the most liberal platforms of our country (and not only ours, by the way) turned out to be ahead of the rest of the world in terms of sharp criticism of the Moscow Victory Parade, who decided to again put the parade in honor of the anniversary of the victory over fascism. In particular, critical posts unexpectedly (or, on the contrary, as expected) decided to break out the social network Vkontakte. No, Vkontakte is of course a free platform where everyone can express his own opinion about any event, but when a social network breeds posts that the Victory Parade this year, you see, mock the Russian people, then the adequacy of the "fruit" is worth considering. If you translate these publications into a more or less decent language, then, according to these, as it happened, the citizens, the Victory Parade could not take people whose nationality is different from the Russian. Well, it turns out: the gentlemen, in fact, contradict themselves. After all, quite recently, the same people declared that now, they say, at last, the corrupt official and “jacket” of Anatoly Serdyukov was replaced at his post by a man who at least wears a military uniform. And so - hello arrived ... They wrote and agreed that the nationality of Sergei Shoigu, hell, it turns out, does not give him the opportunity to take the main parade of the country.

It is obvious that people who admit such statements, like their supporters, somewhat forget (obviously deliberately) in honor of which event the parade on Red Square is generally held. If you have forgotten, you need to remind them: the Victory Parade is held in honor of the Victory of the Soviet people in the war against fascism, and fascism, Nazism, and so on, are extreme forms of uncompromising nationalism with all that follows. And the Soviet people who fought against fascism, this, let it be known, to all the same people: Russians, Tatars, Tuvans, Ukrainians, Kazakhs, Azerbaijanis, and more, more ... Well, you know, it turned out that not only the fair-haired blue-eyed guys from somewhere near the Eagle or Vladimir fought with Nazi Germany and its allies. If today it bothers someone, then these people clearly should inquire about the hours of reception of a local psychiatrist, until the orderlies arrived themselves ...

So what is then indirectly urged by the gentlemen, who suddenly deigned to “dislike” the ethnicity of the defense minister - perhaps not to the cultivation of the manifestations of the same extreme (it must be emphasized: the most extreme) forms of nationalism. Is it again beneficial for someone to divide people not according to their merits and the degree of return to the work entrusted to them, but solely on a national basis. If so, then it is possible to even reach the discussion of "Übermensch - not Übermensch".

Moreover, you can bet on the fact that people who are on the pages of social networks after the Victory Parade, announced that they are indignant about the “non-Russianness of the host parade”, in reality, are ready, as they say, to rake up the heat only by proxy. Few of these gentlemen would stand up for a Russian girl, to whom, say, three people from the Caucasus stick to the subway. Few of them are tutorial stories I read up my native state at least until the middle, not to mention a more detailed acquaintance with the historical realities of the country. Yes, and what could be an acquaintance, if such people, usually on Victory Day, choose the following TV show: 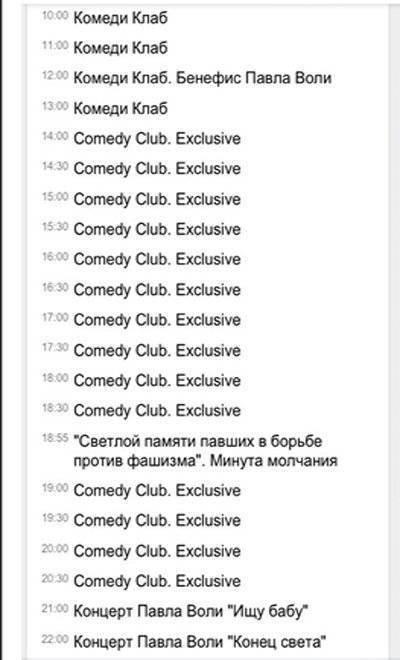 To allocate the "whole" five minutes of 9 air on May, dedicated to the memory of those who fell in the Great Patriotic War - how difficult it was for the TNT channel to make this decision ... And the regular audience of this channel, which obviously included those who in the Victory Parade began to search negative, it was even harder - I had to break away from the “Comedy Club” on 300 seconds a day ...

Echo of Moscow on its Internet service decided to publish the material of a certain “widely known in narrow circles” writer who asked about the past Victory Parade with a question, quote: “What kind of victory? ..” Like, what kind of victory are we celebrating here. Apparently, there is no one to remind this writer ...

The same “Echo” broke out with an article by Mr. Mokhnatkin entitled “Ceremonial Cynicism”, in which a representative of the For Human Rights movement discusses how that, you understand, you could lose millions of citizens of the country in the 40 war (according to the same Mr. Mokhnatkin) , if Germany fought on several fronts against several states at once ... Apparently, if Mokhnatkin himself had fought in 1941, he would have strangled fascism with the forces of one battalion ... And Mokhnatkin also discusses how, quote:
Stalin unleashed the Second World War and destroyed more than half of the population.
, and why do you need to hold a parade? However, after such pearls, even the audience of “Echo of Moscow”, which is usually inclined to support such publications, smashed Mokhnatkin's “theses” to pieces. The most innocuous definition that Mokhnatkin gave to Echo - quote: liberal schizophrenic. What is it?! Is there a listener and user revolution on Echo? At least a single, but an insight? ..

And after such materials our hyperliberal "colleagues" are also perplexed, and why it was attacked by some hackers on Victory Day - they say, who dared; they say that these are obvious machinations of “Putinists” ... Apparently, these gentlemen, who allow themselves to publish the considered character, do not get acquainted with the comments of representatives of their own audience. And it would be necessary, so to speak, to draw conclusions at least occasionally.

Ctrl Enter
Noticed oshЫbku Highlight text and press. Ctrl + Enter
We are
Report on the results of the survey-2013 "Evaluation of state political figures"Azerbaijan hosted a military parade
94 comments
Information
Dear reader, to leave comments on the publication, you must to register.