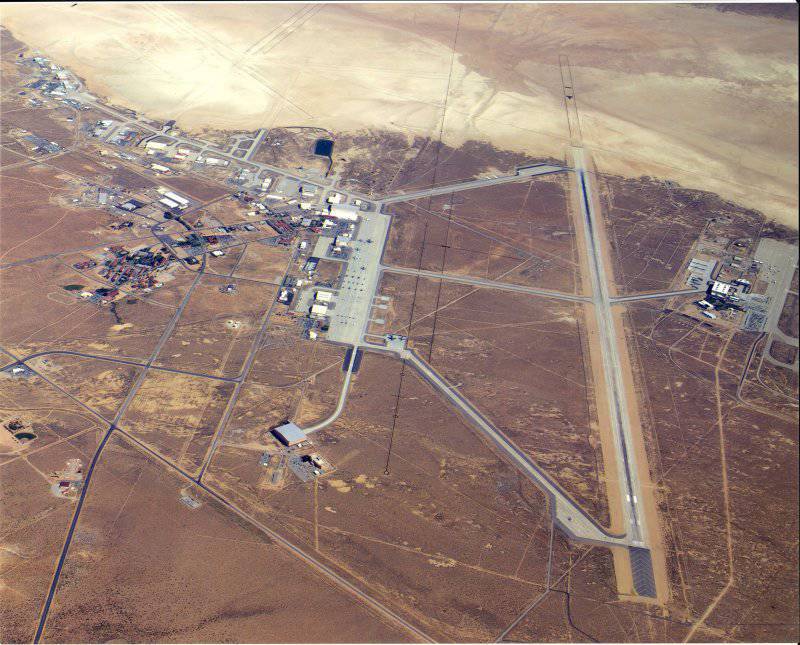 Among other structures, the air base has a runway, which is the longest runway in the world, its length - 11.92 km; however, due to its military status and ground cover, it is not intended to receive civilian courts. The base was built to land a test model of the Enterprise spacecraft (OV-101), which at the end of 1970-s was used only for testing landing techniques and did not fly into space. 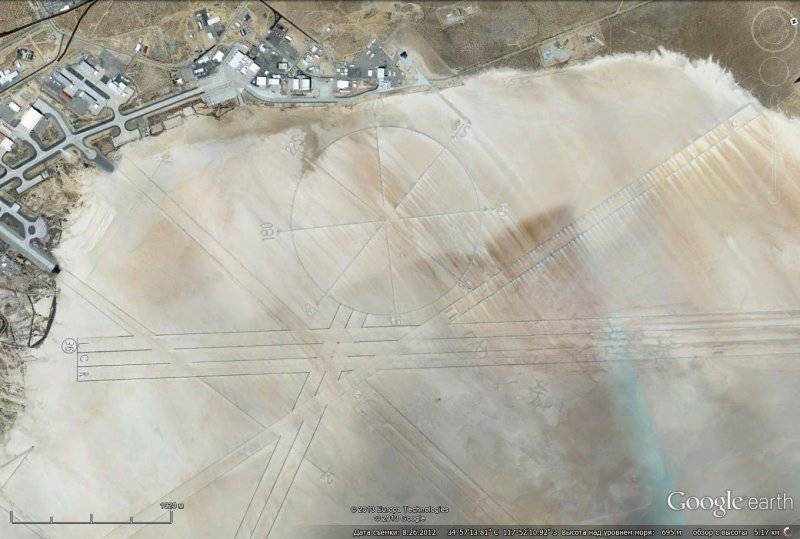 Near the runway, on the ground, built a huge compass with a diameter of about a mile.
The airbase was used to land the shuttles, being for them a reserve airfield, along with the main one in Florida. 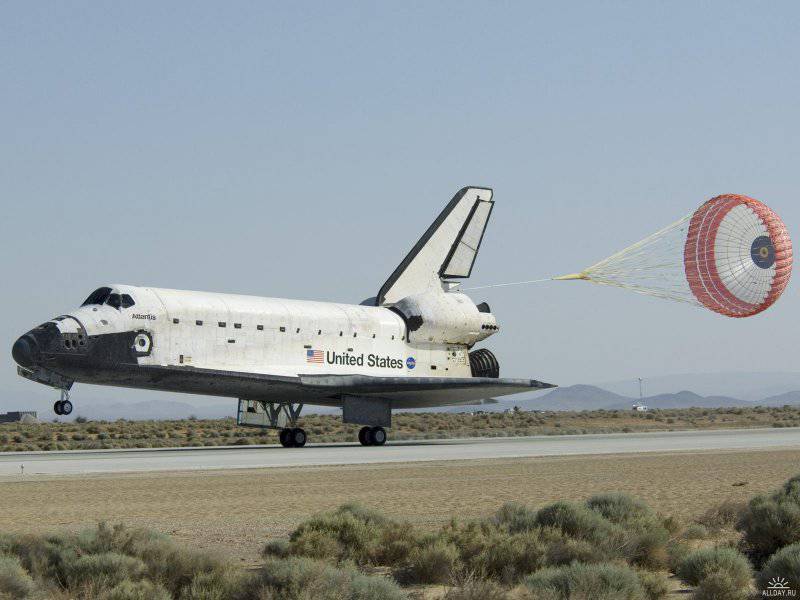 Base Edwards was founded in 1932 year under the command of Lieutenant Colonel Henry Arnold as a training ground for training bombings. For this, a territory was selected away from populated areas, near the dried-up Lake Rogers. When Arnold became commander of the Air Force Corps (the name of the United States Air Force in 1920-1930-s) in 1938, he transferred the base to the tasks of the training and testing complex. This was facilitated by the relief of the dried-up bottom of Lake Rogers (Arnold said that it was flat, like a pool table) - it could be used as a huge natural runway for testing aircraft. As a test facility, the base became known in the 1942 year - then the tests of the first jet aircraft of the US Air Force, P-59Airacomet, began on its territory. 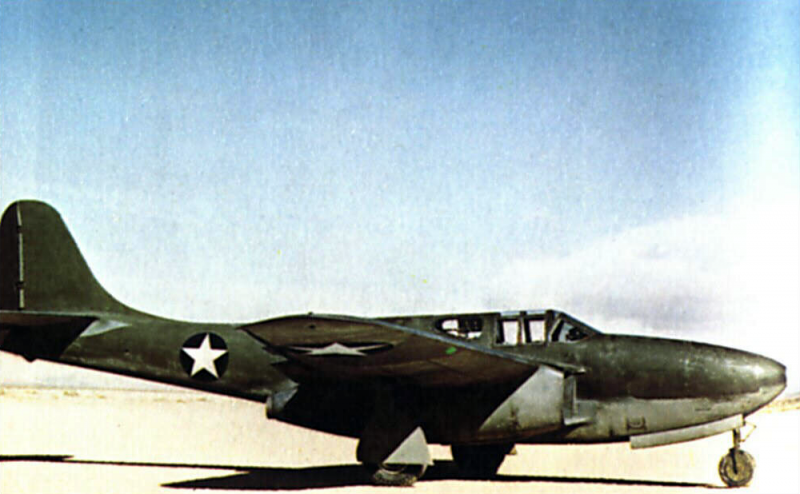 During 1940-s, more than 120 million dollars (in 1940-s prices) were spent on building and improving the base and on expanding its territory. After World War II, the base took up the tests of the latest aerospace technology. In June, the Edwards-based 1951 was officially named the US Air Force Flight Test Center, the US Air Force Flight Test Center. Today it is the largest aviation test center in the world. Here, tests were conducted almost all experimental and entered service with aircraft, except the most "black". As well as testing and testing the combat use of promising models of weapons. There are own units of fighters, transport aircraft and flying tankers, as well as several B-52H and B-1B bombers. 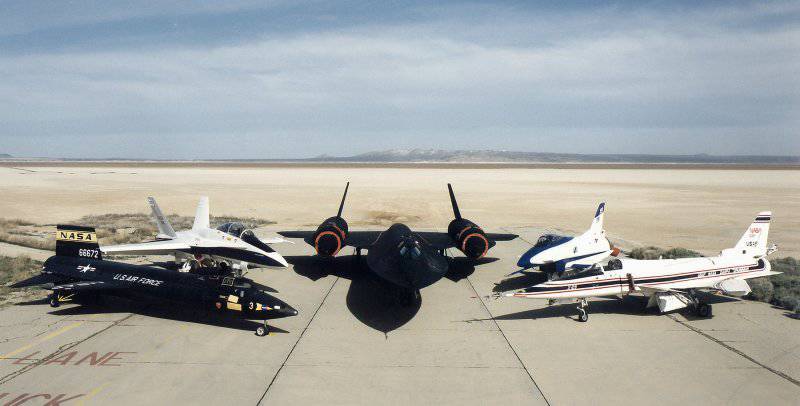 At the air base, today the widest range of aircraft, including unmanned aerial vehicles, is presented.
Some of them are in the memorial - exhibition complex, on the "eternal" parking. 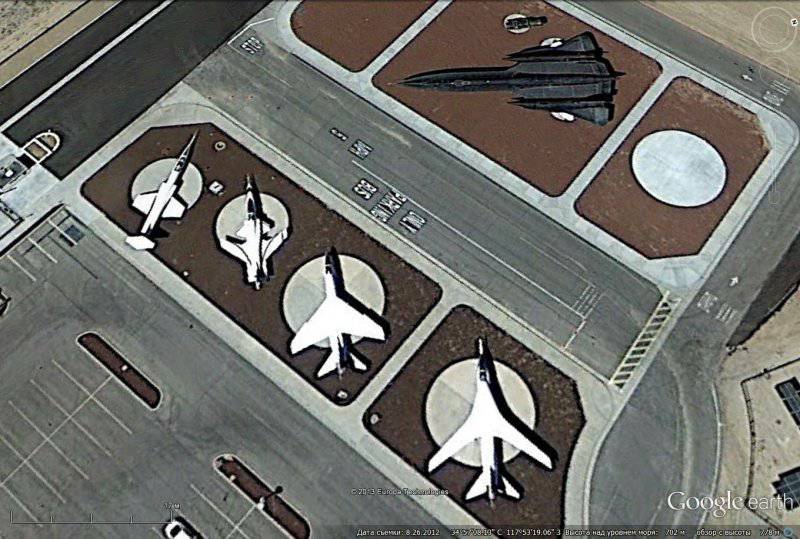 Satellite photo Google Earth. On the "eternal" parking in the memorial complex among others: experimental X-29, high-speed reconnaissance SR-71

But many of the officially decommissioned or experimental - experimental samples, are maintained in flight condition. 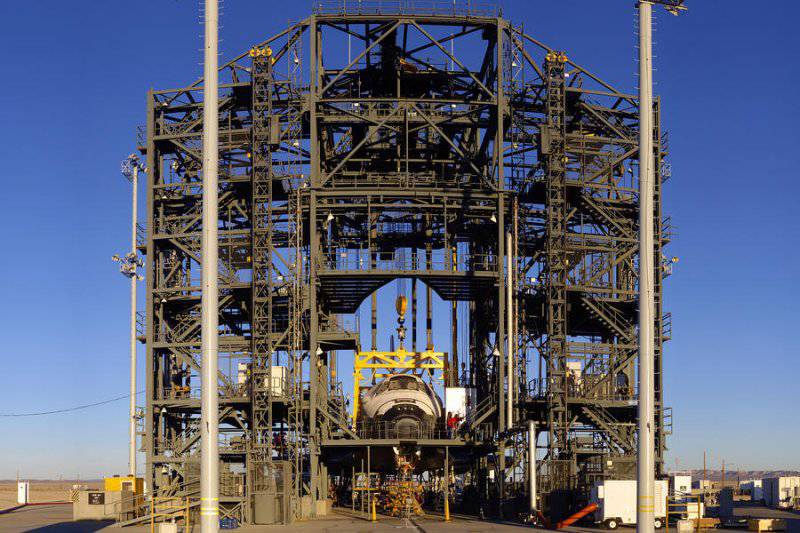 There is also a special facility - a “crane”, for loading the Shuttle onto a special Boeing-747 transport aircraft, equipped with attachment points on the top of the fuselage. 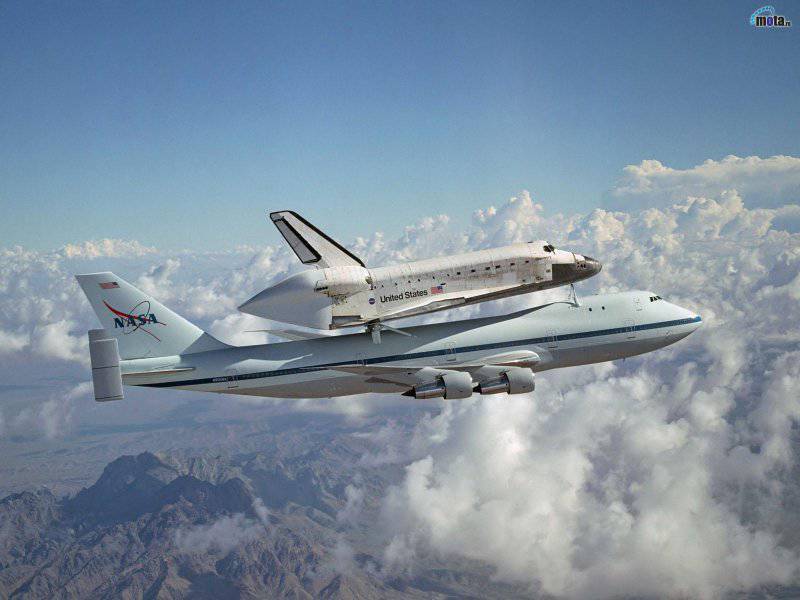 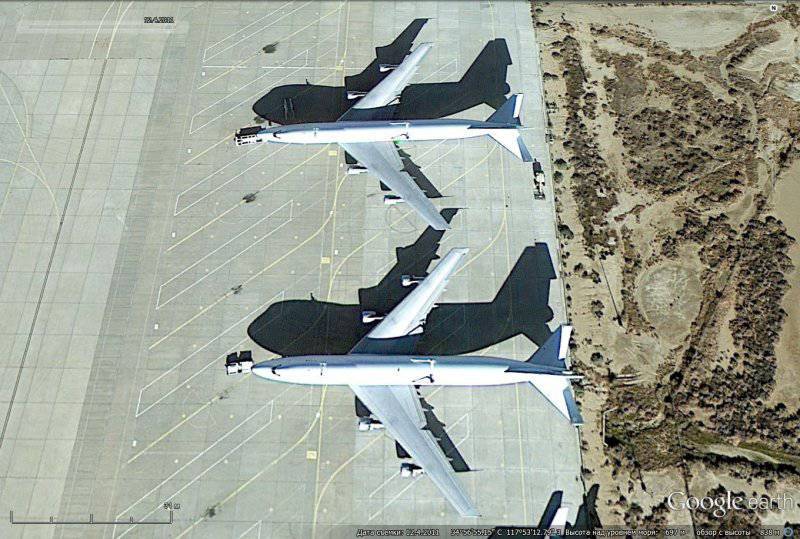 For research in the field of improving the flight performance of the 4 generation fighter jets, the F-16XL with the deltoid wing and the F-15STOL with a reduced takeoff and run length were created.
F-16XL is the designation of General Dynamics for the future development of the F-16 aircraft with a new double deltoid wing, having an area in 1,2 larger than the standard version. 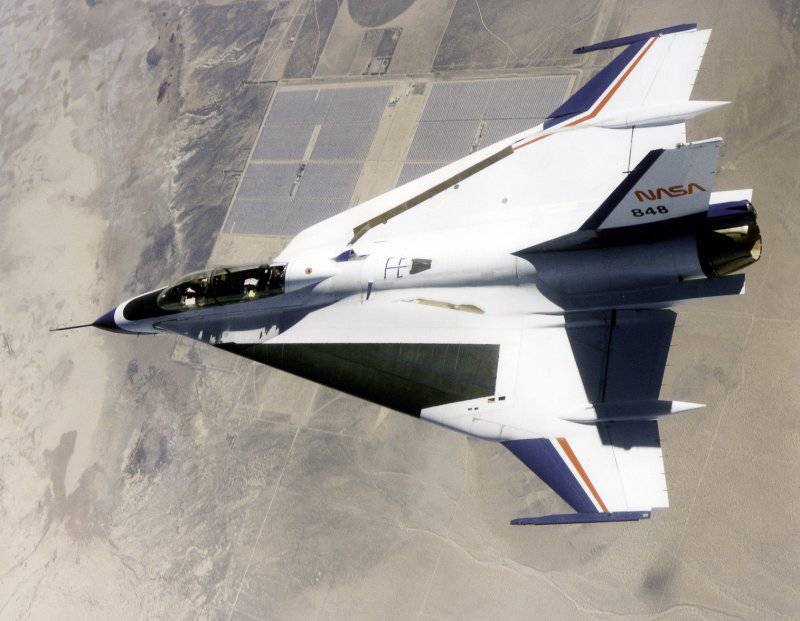 The aircraft had an elongated fuselage to increase the internal fuel supply by 82 and the underwing assemblies of the suspension, armament twice as heavy. 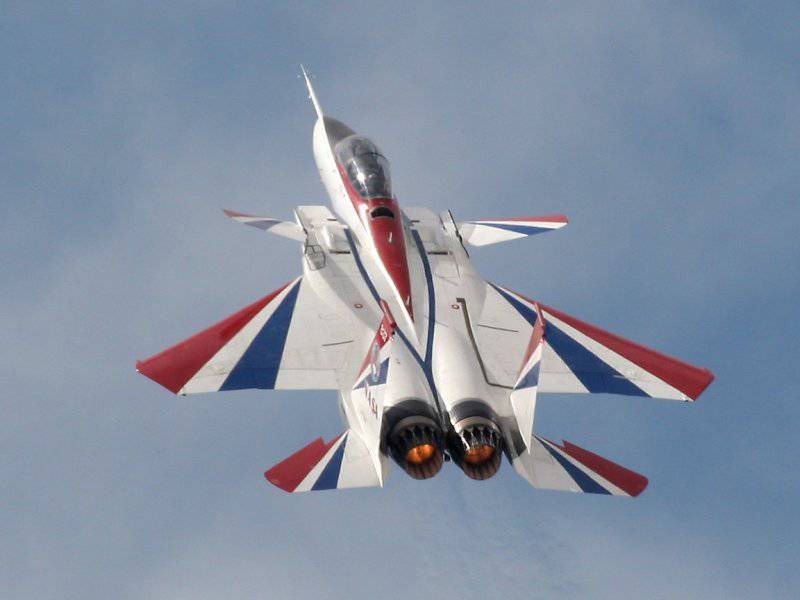 The prototype machine received a new digital radio remote control system that combines traditional executive controls with PGO control, engine, rotary nozzles, nose wheel and main wheel brakes. A characteristic feature of the F-15S / MTD was the reconfigurability of the control system: when any executive control surface was lost or failed, as well as the failure of one of the engines, the functions of the other controls were automatically redefined to maintain the stability and controllability of the aircraft. Due to the use of flat nozzles and PGO, the angular velocity of the heel increased by 24%, and the pitch - by 27%. The possibility of landing on a dry strip with a length of 425 m and a wet length of 985 m was demonstrated (for the serial F-15C fighter, the 2300 m of a wet strip is required). The technologies developed on the F-15S / MTD have found wide application in the creation of the fifth generation F / A-22A Raptor fighter, as well as in a number of other programs. 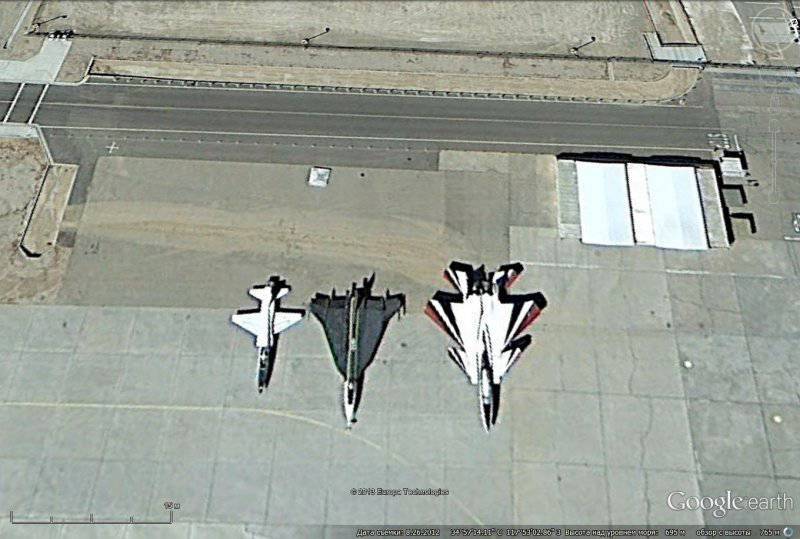 A line of experimental instruments of the "X" series was developed and tested. 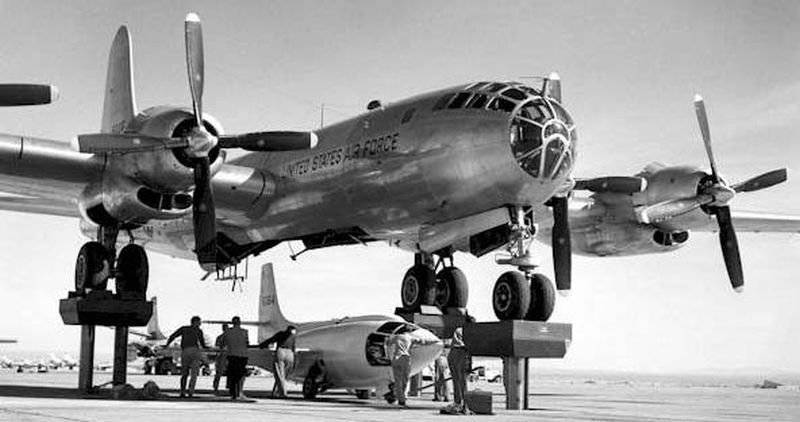 Over the next year and a half, more 80 departures were carried out. The last one was implemented at the beginning of 1949. The maximum achieved speed for all time is 1.5 thousands of km / s, and the maximum height is 21.3 thousands of meters.

X-15 - the second known aircraft from the X series reached a record year for 1960 year in 100 km and speed 6 Mach. The main task of X-15 is the study of flight conditions at hypersonic speeds and entry into the atmosphere of winged vehicles, the assessment of new design solutions, thermal protective coatings, psycho-physiological aspects of control in the upper atmosphere. 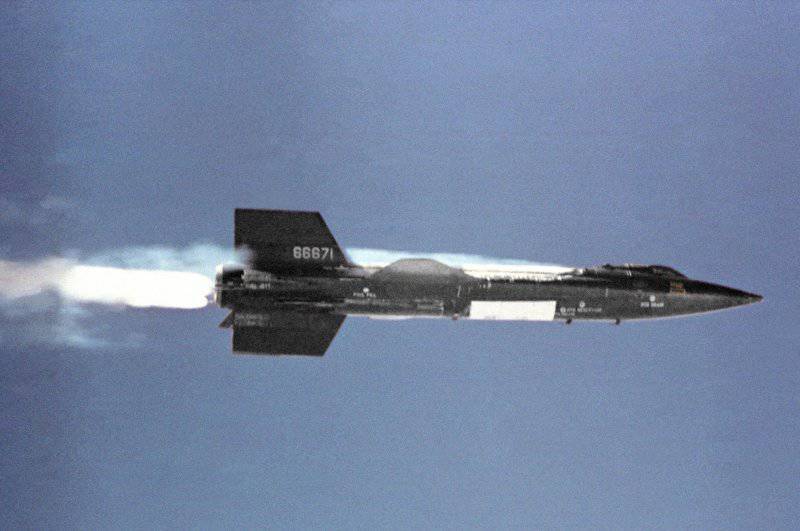 Started on the technology "air start" with a strategic bomber "B-52" (hung under the wing), uncoupling from the carrier was made at a height of about 15 km, landed independently at the airbase.
All planes in the X series are prototypes, so all of them were built in just a few copies. 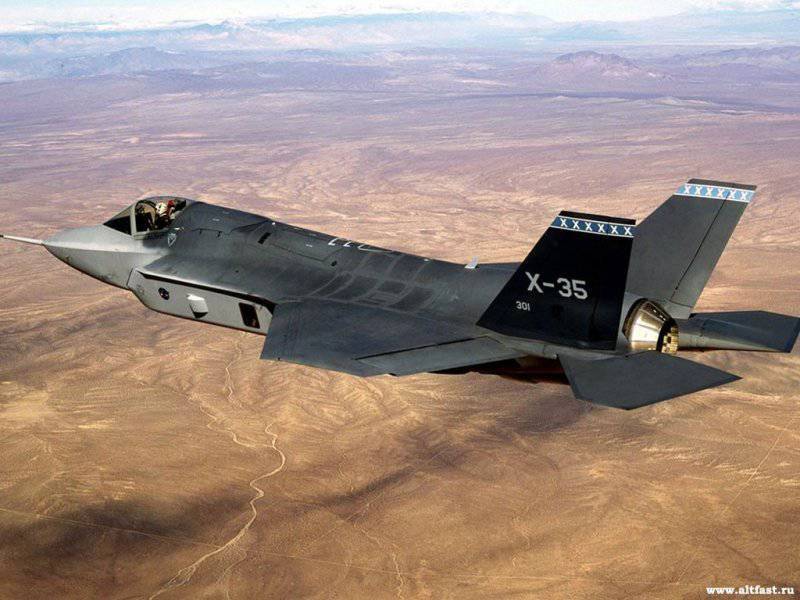 Research in the field of aerodynamics, led to the creation of such aircraft as the X-29, with the reverse swept wing. 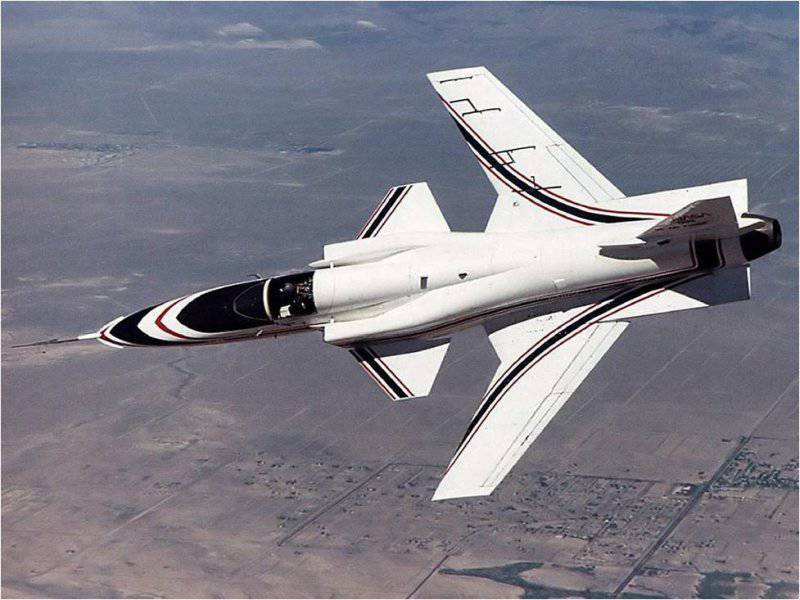 Currently, research is being conducted in the field of cryogenic engines, in order to obtain hypersonic speeds. 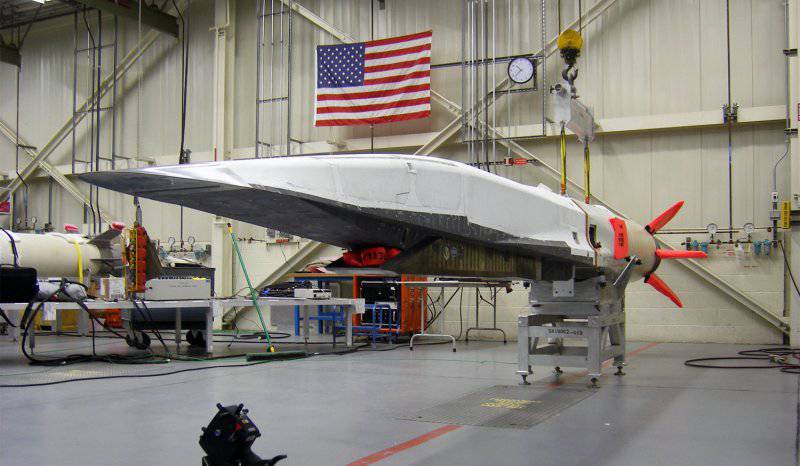 X-51A - developed in the US hypersonic cruise missile.
The development goes within the framework of the concept of “fast global strike”, the main goal is to reduce the flight time of high-precision cruise missiles. According to the project, X-51A should reach a maximum speed of about 6-7 M (6,5-7,5 thousand km / h). 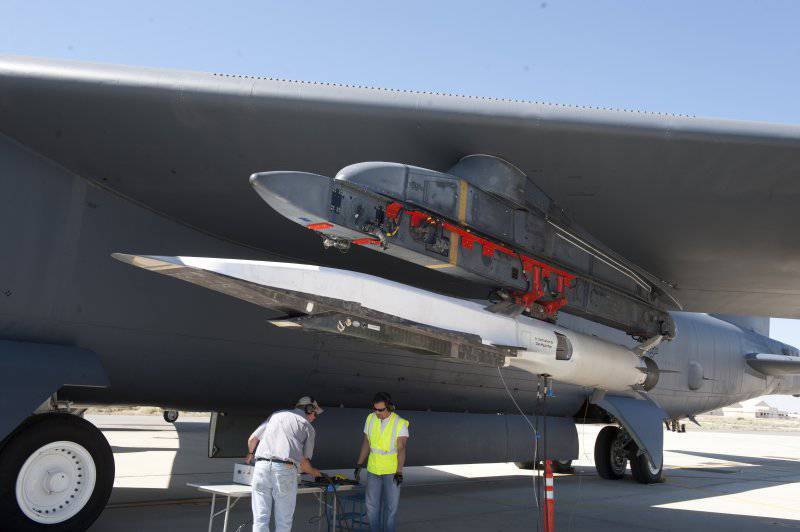 26 May 2010 in the United States held the first flight of the X-51A hypersonic missile. The tests were considered successful. It is known that the engine worked for about three and a half minutes of the planned five, which is currently a record of the duration of the flight of an aircraft with a ramjet hypersonic jet engine. During this time, the rocket managed to accelerate to 5 M.

Not ignored and platform with combat lasers. 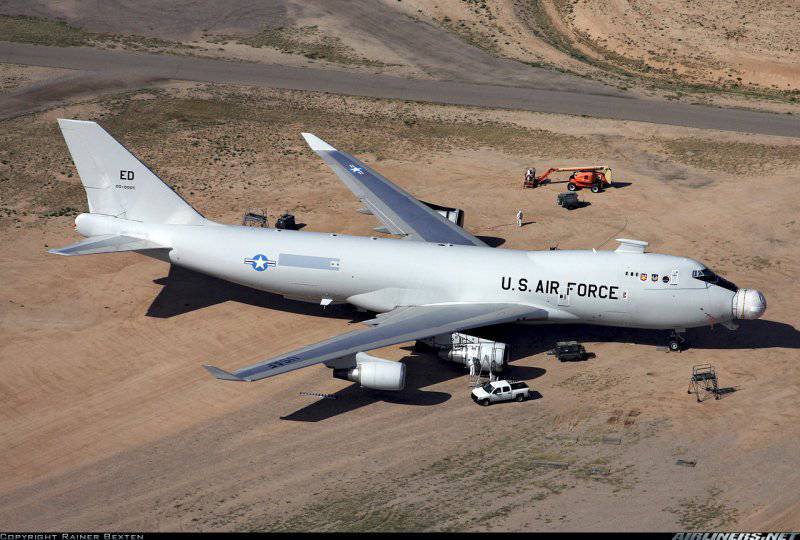 This experimental, flying laser gun YAL-1, based on the Boeing-747, is capable of destroying ballistic missiles.

Much attention is paid to unmanned aerial vehicles, both reconnaissance and shock. At the Edwards airbase, full-scale tests of the RQ-4 Global Hawk strategic reconnaissance UAV were conducted. 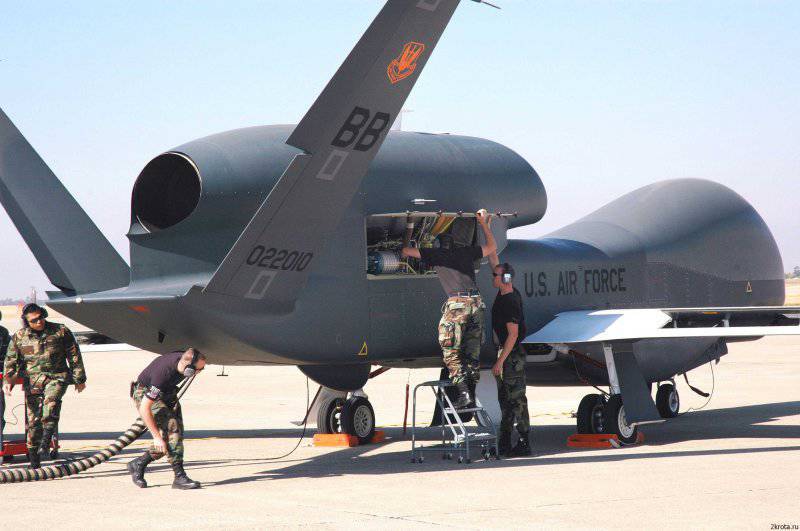 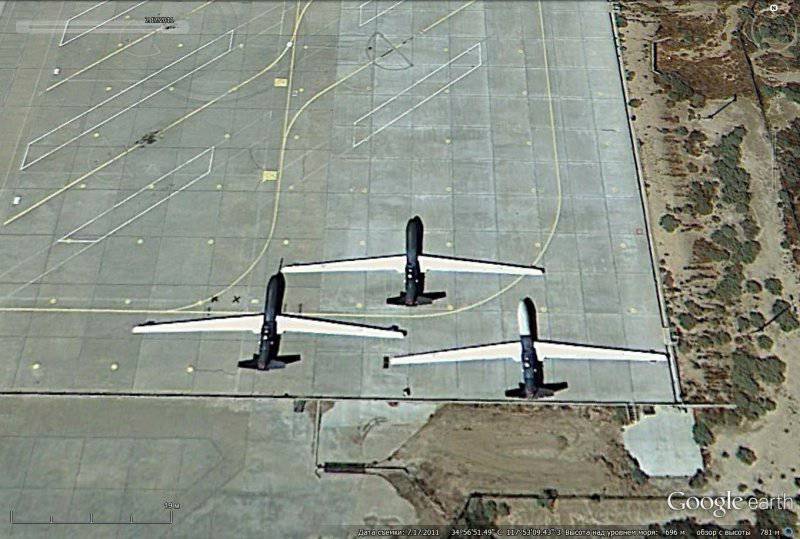 1 June 2012 of the year made the first flight of a UAV from the company Boeing "Phantom Eye" at the Edwards airbase. The departure of the drone took place in 6 hours 22 minutes local time and lasted almost half an hour. The unique hydrogen-powered Phantom Eye drone has a wingspan of 76,25 m (more than the Ruslan’s!), The payload is 203 kg. The ceiling of the giant intelligence reaches 20 km, and cruising speed - 278 km / h. 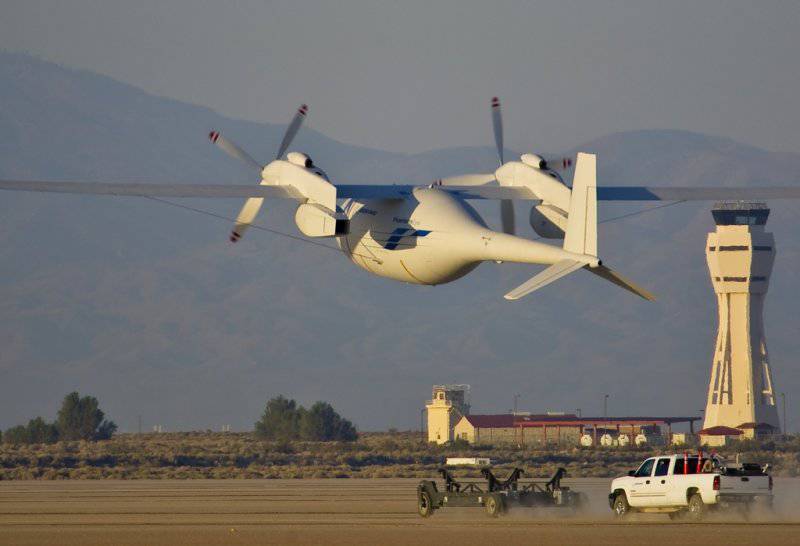 Instead of petroleum products, Phantom Eye uses liquid hydrogen as its fuel. This is twice as efficient as oil, which allows the device to be airborne for up to 96 hours, instead of 36, as it is possible, say, the competitor Lockheed Martin, RQ-4 Global Hawk. The weight of the empty machine is equal to 3 390 kilograms, which is the lowest possible record, thanks to the use of carbon fiber and lightweight chassis, consisting of a front wheel and side supports. 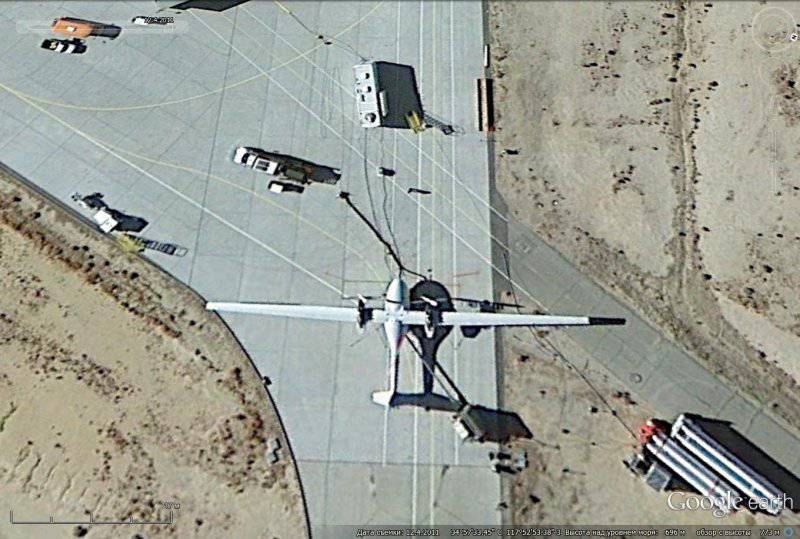