Memo on the unity of Europeans. Who were the last fierce defenders of Nazi Germany from the "Russian barbarians" 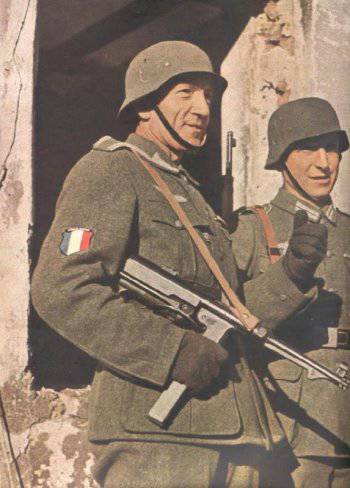 68 years ago ended the assault on Berlin. The Soviet troops of the 1-Byelorussian and 1-th Ukrainian Fronts conducted a round-the-clock offensive within the boundaries of the capital of the Third Reich, approaching the long-awaited victory in the Great Patriotic War with each ten meters passed. The fighting in the central regions of the huge city, Berlin-Mitte, was particularly tense.


An interesting fact is that the main part of the Berlin garrison consisted of all sorts of improvised battle groups, and not regular Wehrmacht formations. Parts consisting of Volkssturmists and members of the "Hitler Youth" were interspersed with all sorts of educational and police units. The reason for this was the entourage of the main forces of the German 9 army of General T. Busse in the Halbe boiler east of Berlin (in Russian historiography, these events are known as the defeat of the Frankfurt-Guben enemy grouping) and the failure of General V. Wenck to break through the city of the 12 army.

Another component of the defense of Berlin, with the most combat-ready, was part of the Waffen-SS, which in itself is not surprising. However, it is worth considering in more detail their staffing. The largest division of the SS troops, which the Soviet troops had to fight, was the SS division “Nordland”, its full name is the 11-I volunteer tank-grenadier SS division “Nordland”. Its core during the formation was the motorized regiment "Nordland", transferred from the SS division "Viking", recruited volunteers from Denmark, the Netherlands, Norway. In 1945, the division included the grenadier regiments "Danmark" and "Norg", the Dutch volunteers were sent to the forming SS division "Nederland", the French SS division "Charlemagne" ("Charlemagne") and the Belgian volunteers were also formed from the West European volunteers. SS divisions "Langemark" and "Wallonia" and a number of smaller units.

Nowadays, most European historians claim the compulsory formation of these military units, but information about the behavior of their personnel in combat conditions is much more often refuted than confirmed by this position.

At the end of April 1945, it was obvious that Hitler Germany was on the verge of a final catastrophe. The question of her own fate arose sharply before those who had previously elected her side. On the Western Front, most of the military units of the SS formed from non-citizens of the Reich surrendered to the Anglo-American allies, but many of them fought with the Red Army to the last possible opportunity, this was especially vivid in the Battle for Berlin. The Dutch SS division “Nederland” was destroyed in the Halbah cauldron, and the SS division “Nordland” and part of the SS division “Charlemagne” died during the storming of the city itself. Let us ask ourselves if they had other options?

Based on historical examples, you can confidently answer that there were. The best way to confirm the thesis of some historians about the forced recruitment of Western Europeans into the SS troops could be confirmed by an organized surrender when establishing direct contact with Soviet troops, as it usually happened on the Western Front. It was possible to follow the example of the 1st and 2nd divisions of the ROA (they are also the 600th and 650th infantry divisions of the Wehrmacht), which rushed to the west in order to surrender precisely to the British and Americans.

However, the European SS volunteers chose another way - to fight the Russians to the last drop of blood, thereby extending the agony of Hitler's Berlin for a few days. That was their European choice.

They fought fiercely, without illusions about the “wunderwaffe” - a miraculousweapons, due to change the course of the war, which was broadcast on the radio by the Reich Minister Minister Dr. J. Goebbels in the last April days of 1945. So, one of the last Knights of the Order of the Knight's Cross for the destruction of several Soviet tanks became the SS Unterscharführer Eugene Valot, a young Parisian from the Charlemagne SS division, it happened on April 29, and on May 2, a month before the twenty-second anniversary, a fresh cavalier was found by a bullet that put an end to his life.

Some of the survivors wrote memoirs, in which they answered questions why they served Hitler until the last days. Usually they wrote about the need to protect Europe from Russian barbarians, Bolsheviks and atheists. Moreover, this concept, which looked normal in the minds of the Berlin 12-14-year-old members of the Hitler Youth, was even advanced by those who managed to make war with the SS troops directly in the Soviet Union.

Recall that in the 1940 year, none of the military units of Belgium, the Netherlands, Denmark, Norway and France even showed close proximity to the Wehrmacht, which occupied these countries through the use of armed force, the level of combat capability with which most of the countries volunteers fought SS on the Eastern Front.

If we look to the Europeans for an excuse, one could say that “the cause is the feeling of distrust and danger emanating from Russia regardless of its state structure, social system or religion, which has been formed in the countries of Western Europe for centuries. Although hardly anyone remembers at least one serious reason to fear Russia and Russians for the residents of these small countries. ”

But if we approach the issue objectively, then the only and main reason for this attitude of Europeans to Russia lies precisely in its fundamental disobedience. European countries - the essence of the country repeatedly subdued and conquered by each other. Japan, China and India - despite their strangeness - do not cause such fierce rejection of them, for they were conquered. Russia, however, even though inhabited predominantly by a Caucasoid Christian people, needs an alarmist European consciousness to be conquered and conquered. Without this, it is dangerous.

And by the way - since then nothing has changed in the attitude of the European consciousness to us. It is worth considering.

Ctrl Enter
Noticed a mistake Highlight text and press. Ctrl + Enter
We are
Eve of the scientific revolution in the field of historiographySevastopol should know the truth! Who will come to power, if ... (memo)
61 comment
Ad