13 May 2013
8
The Boeing 707 is a four-engine passenger airliner designed at the start of the 1950-x. One of the first jet passenger liners in the world, along with the British DH-106 Comet, the Soviet Tu-104 and the French Sud Aviacion Caravelle. 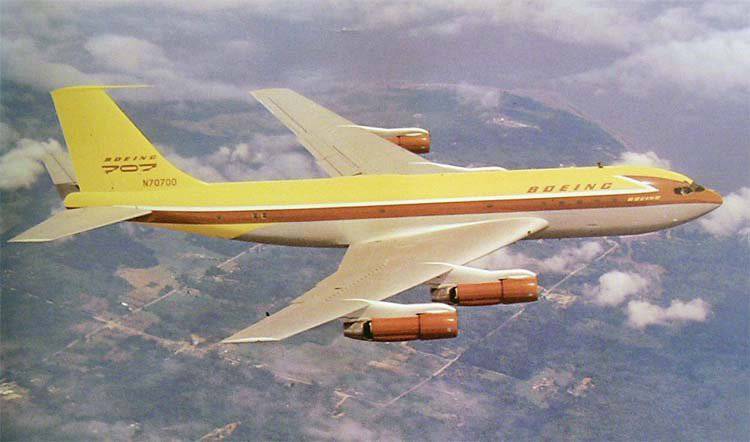 The commercial operation of the 707-120 began with Pan American World Airways 26 October 1958. The largest customers of B-707 were American PanAm and TWA, thanks to these airliners, which rapidly increased the size of their fleets and made international air travel mass and popular. 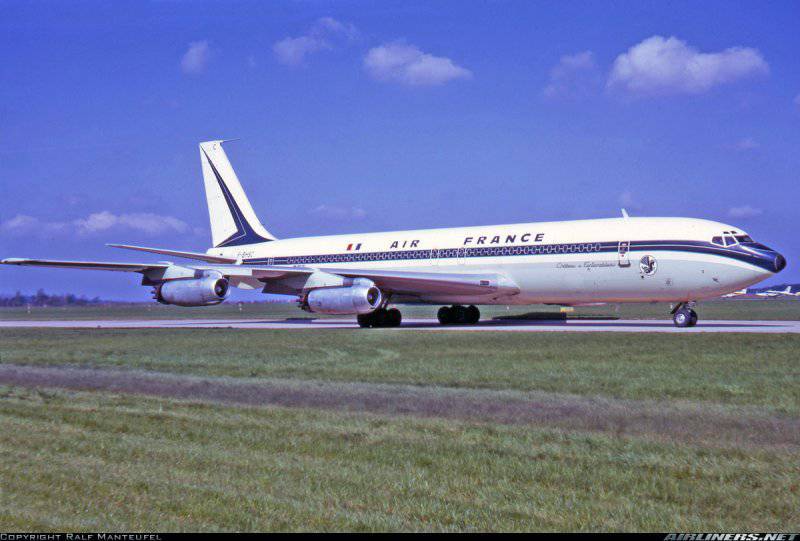 Soon they were joined by Western European airlines. Mass production of B-707 was carried out in 1960-s, when customers received dozens of new cars every year. Competition aircraft was DC-8, initially more successful due to the best reputation of the manufacturer. After improvements Boeing-707 began to sell much better.

With the increase in passenger traffic, it became obvious that the Boeing-707 is obsolete. For its range, the aircraft had too little capacity, its engines were noisy and uneconomical. Modernization of the liner with an increase in capacity required the replacement of the airframe. As a result, Boeing launched the Boeing-747 to the market, thus satisfying the demand for large-capacity airplanes for long-haul flights.

By the beginning of 1970's, the number of orders for the Boeing-707 dropped sharply. Airlines of developed countries took them out of the park, the activity of aircraft of this type moved to the countries of Asia and Latin America, and then Africa. In 1978, mass production was discontinued, the last regular Boeing-1983 flight to the USA took place at 707. The last major passenger operator, Boeing-707, was Lebanon (before 1998). By the beginning of the 2000, the aircraft remained in civilian exploitation (almost exclusively cargo) mainly in the poorest countries of Africa, Asia and Latin America. As of the beginning of the 2011, less than 140 type B-707 aircraft were used, almost all in the Air Force of a number of countries (AWACS and cargo aircraft). Several cars are used by civilian cargo airlines, 8 - in government squads. The only airline that uses B-707 on regular flights is Iranian Saha Air, which still has 5 machines in operation, as of 10 August 2010. 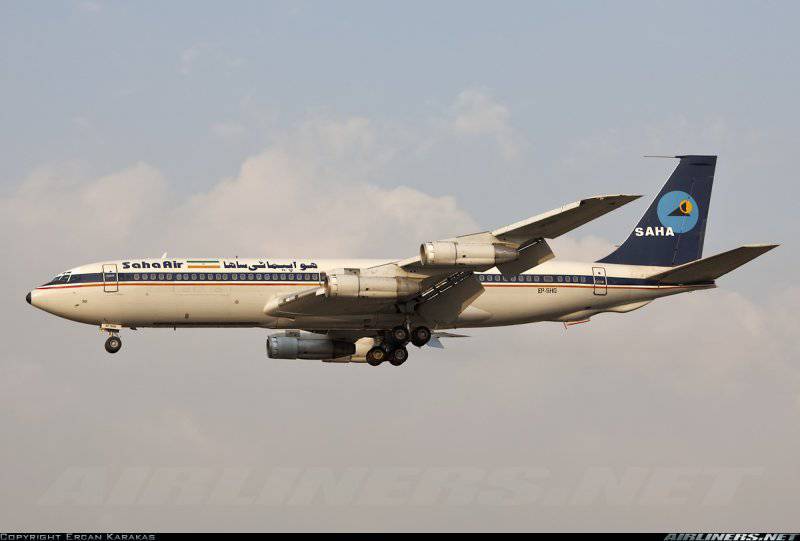 This is the last passenger operator B-707. Thus, the Boeing 707 is the only one of the first generation jet liners that is still in operation; other "pioneers" of jet passenger aviation gone to history back in 80's. Despite the almost complete abandonment of its use in civilian airlines, military aircraft created on its base continue to be actively used.

The first military transport aircraft / tanker aircraft KC-135, created on the basis of 707, took off in August 1956, and its deliveries to the USAF Strategic Aviation Command (SAC) at Castle Air Base in California began in June 1957. 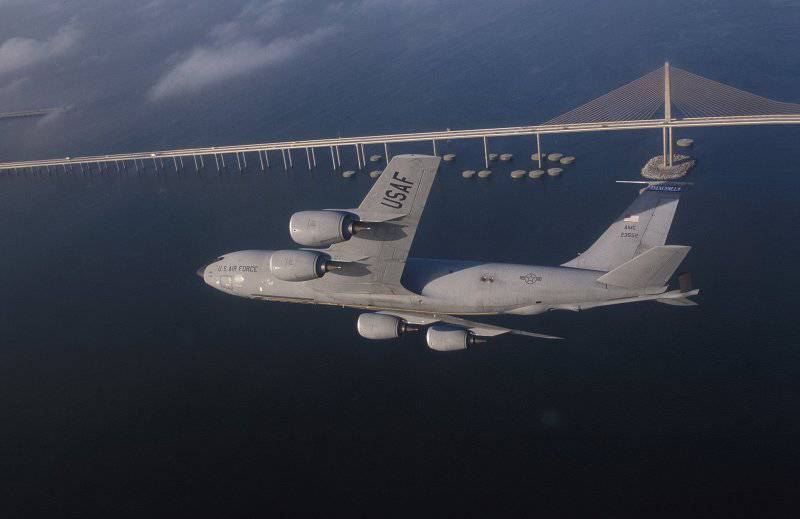 For many years to come, he became the main aircraft-tanker for the Strategic Aviation Command and the US Air Force. In addition to the United States, it was shipped to France, Singapore, and Turkey. 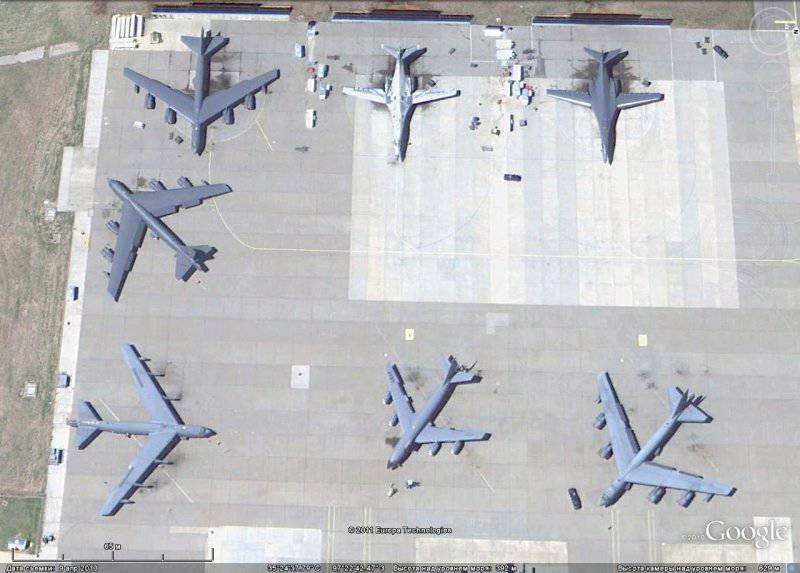 Satellite image of Google Earth. КС-135 (in the middle), in the company B-52Н and B-1Б, Tinker airbase

But, perhaps, the most interesting and recognizable aircraft based on the 707-th was the DRLO E-3 AWACS. 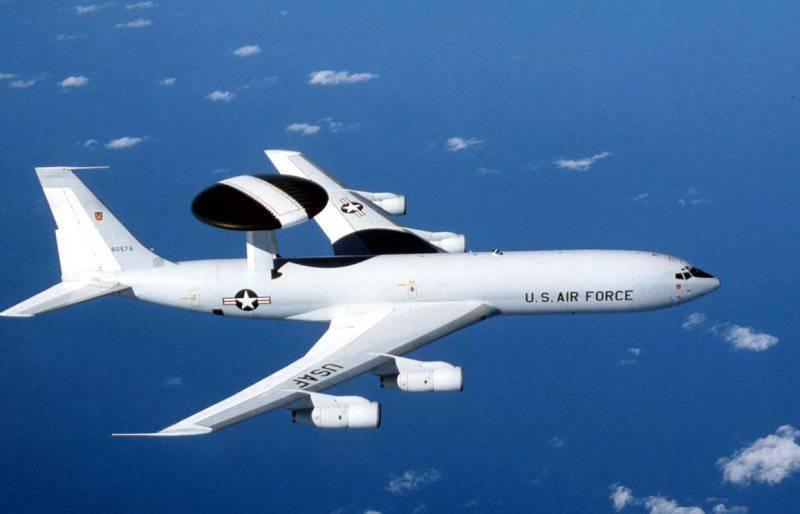 At the end of the 1960-s in the United States, the concept of national defense was adopted, according to which the detection of enemy bombers was to be carried out on long-distance approaches by over-the-counter radar oblique-return scanning of space. When approaching the bombers for a more accurate determination of their position and operational guidance of fighters were used long-range radar detection aircraft.

The first prototype of the AWACS aircraft, created by Boeing based on the airframe of a Boeing-707-320 cargo plane, was designated as EC-137D. He made the first flight of February 5 1972. In total, two experimental machines were built. The series went aircraft E-3A, which was ordered 34. In the future, the aircraft were repeatedly upgraded, including those in service. 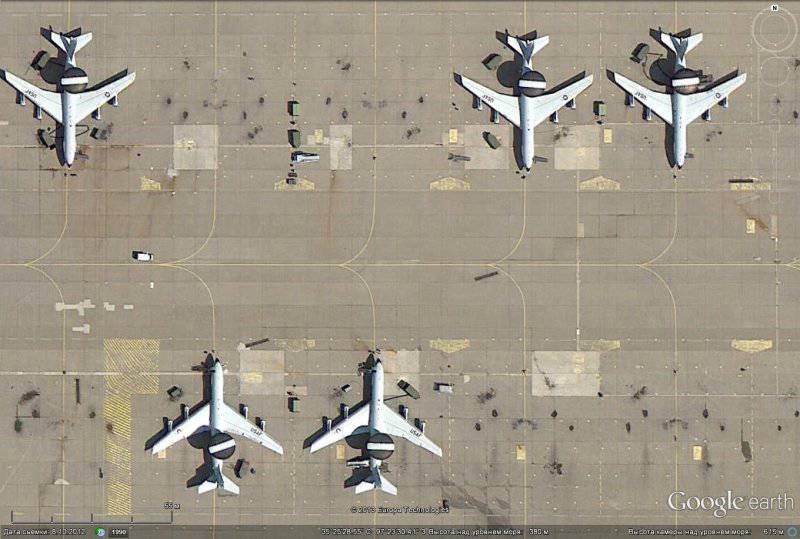 Until the end of mass production in 1992 year built 68 aircraft. It is in service with the USA, Great Britain, France, Saudi Arabia air forces.

In the air traffic control service, they were given the code Air Force One — the plane on which the president was on board. Currently, both aircraft are replaced by 2 VC-25 and 4 C-32 (for vice-presidents and other government officials) and are in museums.

Boeing E-6 Mercury is a control and communications aircraft developed by the American company Boeing based on the passenger aircraft Boeing 707-320. 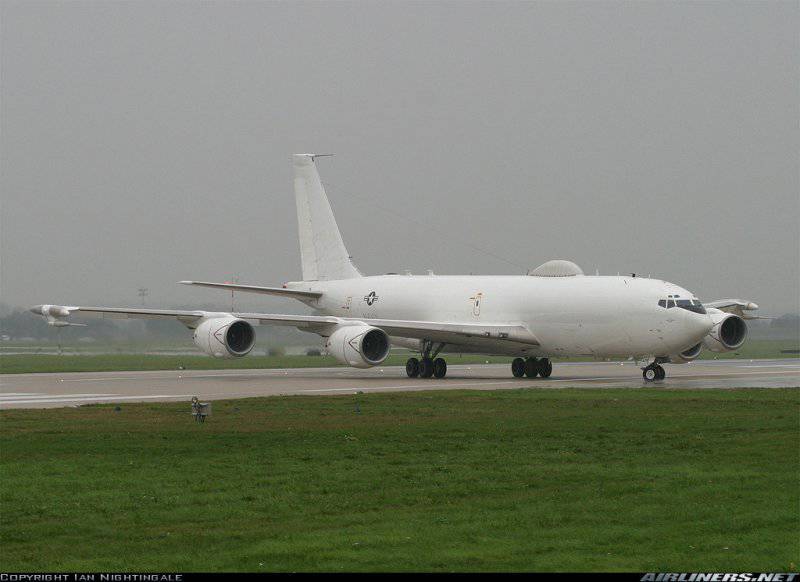 It is designed to provide a backup system for communications with nuclear-powered submarines with ballistic missiles (SSBN) of the US Navy, and is also used as an air command post of the joint strategic command of the US Armed Forces. Produced by 16 aircraft. It consists of the USAF. 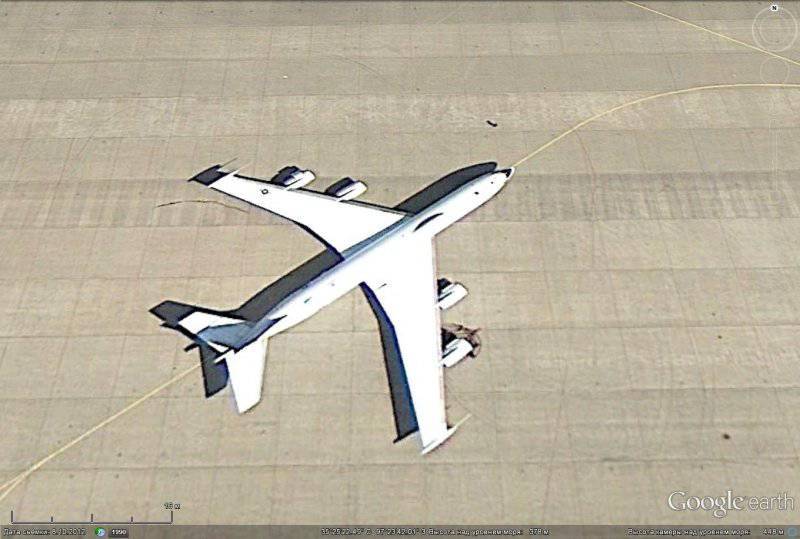 Boeing E-8, developed by the main contractor "Grumman" (now Northrop-Grumman), was very successfully tested in 1991 in the operation "Desert Storm." The aviation complex represents a big step forward in tracking and managing combat operations of ground forces with the same capabilities as the E-3 provides for air combat. The radar antenna is housed in a long front-door canoe radome. 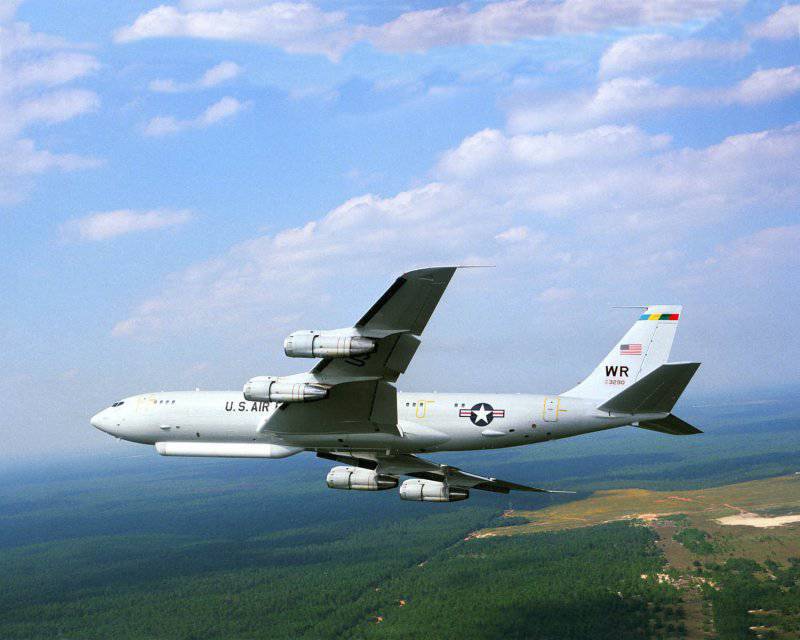 In the cab equipped operator jobs. Data lines provide almost real-time information for ground forces. The radar detects and tracks the position and movement of all ground vehicles, and also performs other functions. 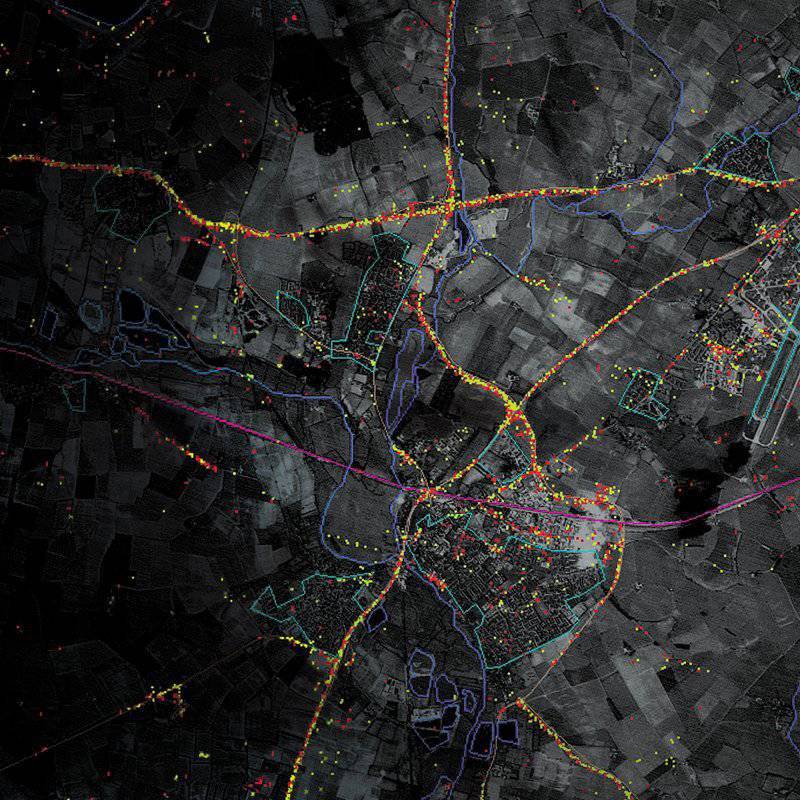 Image of the terrain obtained from the E-8

It recognizes and classifies wheeled and tracked vehicles in all weather conditions. The basis of the E-8 complex is the Boeing Model 707-300 glider, supplied by 17 aircraft.

C-18 is a military transport aircraft developed by the American firm Boeing based on the civilian airliner Boeing 707-323C. The aircraft entered service with the Air Force in 1982 year. The designation C-18A received eight Model 707 airliners, previously owned by the airline "American Airlines", which were purchased in 1981 for the 4950-th test wing. Two aircraft remained in its original form (one later dismantled for parts) and used for testing and training. Of the remaining six cars, four were converted into EC-135B ARIA (ARIA (Apollo Range Instrumentation Aircraft, later Advanced Range Instrumentation Aircraft)) aircraft measuring points (CIP) by installing a large antenna for receiving telemetry information closed with a giant fairing. The last couple was turned in CIP EC-18D CMMCA (Cruise Missile Mission Control Aircraft) for testing cruise missiles, installing APG-63 radars and telemetry data reception equipment on them.

C-135B: four converted into aircraft measuring points (CIP) with an antenna in the nose, closed by a volute fairing. EC-135E: Four of eight EC-135N equipped with dual-circuit TPD TF33-P-102 and used for testing. EC-135N: four C-135A, converted into ARIA CIP for tracking spacecraft. The RC-135 scouts, who kept in constant tension, the USSR air defense forces, based on the KC-135A Stratotanker and C-135 Stratolifter, had a significant modernization resource for creating new modifications, including aircraft for various types of reconnaissance (radio electronic, radio interception, radar for tracking tests ballistic missiles, etc.). 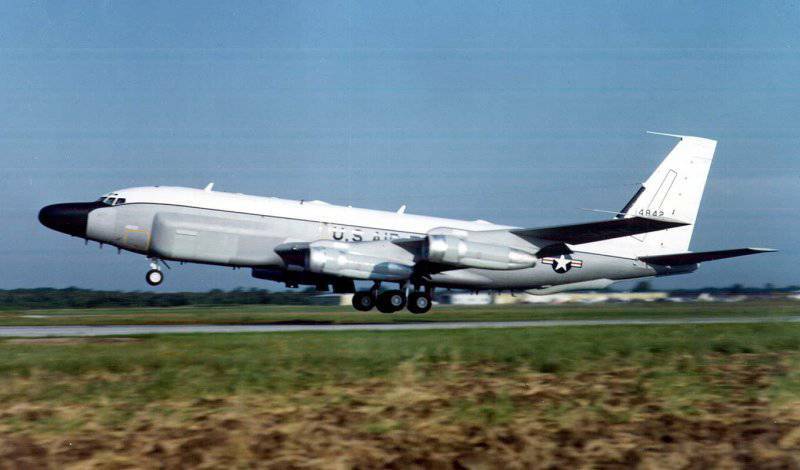 They proved their effectiveness when entering the Desert Storm and Desert Shield operations, the RC-135V / W Rivet Joint aircraft were the basis of the radio intelligence forces in the Persian Gulf, they controlled the operation of Iraqi communication systems and radar stations. The first RC-135 arrived in Saudi Arabia through Mildenhol air base in August 1990, after the attack on Kuwait. The aircraft remained in the Middle East for another ten weeks after the armistice. Throughout almost the entire Desert Shield operation, three RC-135 aircraft were based at Riyadh Airport, Saudi Arabia. At the end of the 1990-s, all of these machines were consolidated into the 55-e strategic wing deployed at Offut, Nebraska. 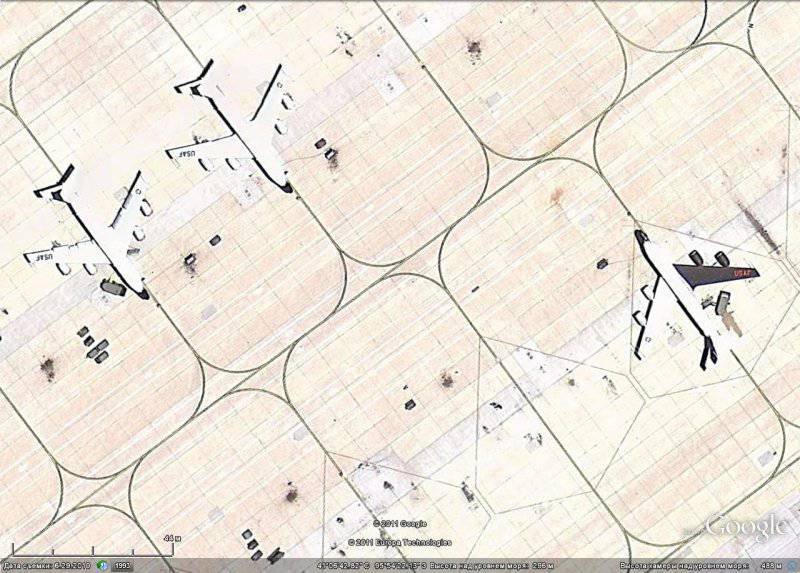 Ctrl Enter
Noticed a mistake Highlight text and press. Ctrl + Enter
We are
60 years ago made the first regular flight of the Soviet passenger liner Tu-104Fighter-interceptor F-106 and Su-15 "Keepers of the sky"
8 comments
Information
Dear reader, to leave comments on the publication, you must to register.