Syria: unite in the face of the aggressor 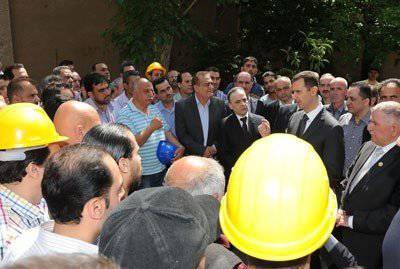 
The leadership of the ruling Arab Socialist Renaissance Party declared that Syria would continue to resist Israeli aggression and at the same time fight terrorism, and called on the Syrian people to rally closer around the army.

The party’s statement stated that the attack was a direct result of appeals from the so-called “opposition” to outside interference.
Condemned this perfidious attack and the ATS People’s Council. The deputies stressed that the leadership, the army and the people of the country are ready to defend their sovereignty in the face of any external enemy, and it is impossible to break the people, who for many centuries have been a symbol of resilience.

Many parties, organizations, trade unions, as well as representatives of communities abroad sharply opposed Israeli aggression. The statements noted that this attack was intended to save terrorist groups from final defeat. Many organizations in other Arab countries joined the Syrian voices and called for organizing a demonstration of solidarity with Syria.

A rally organized by the Anti-Globalization Movement together with the Union of Syrian Students was held in Moscow on the square of Krasnopresnenskaya Outpost, where citizens of Russia and Syria opposed aggressive Zionist plans. Even citizens of Venezuela joined the action.

The SAR Foreign Minister Walid Al-Moallem held a telephone conversation with his Russian counterpart Sergey Lavrov, discussing with him the situation in the region that arose after the attack. Muallem stressed that the criminal actions of Israel expose his relationship with terrorists.

According to the UN Charter, Syria has the right to respond to these actions, the diplomat added.

Lavrov, in his turn, confined himself to statements that “Russia is interested in the stability of Syria” and expressed concern over the threats posed by the violation of the SAR’s sovereignty.

Solidarity with Syria and its people was expressed by the country, which is also under the gun of the imperialist forces - the DPRK. The Ministry of Foreign Affairs of the DPRK stressed that there can be no justification for the Israeli military attack on the sovereign state of Syria. Israeli aggression under the patronage of the United States is the main cause of the violation of peace and stability in the Middle East, said Pyongyang.

Venezuelan President Nicolas Maduro strongly condemned the Israeli crime. The Cuban Foreign Ministry also issued a statement in which the United States and Israel are accused of gross violation of international law. These voices were joined by Ecuador. New Israeli aggression against Syria undermines the region and jeopardizes international security, believe Latin America. A similar position was taken by the Republic of South Africa.

New attacks and crimes of the "opposition"

During these days, the so-called "opposition" has committed many bloody crimes, once again showing that it needs neither peace, nor democracy, nor the good of the country.

April 30 was a major attack on historical Marje Square in the center of Damascus. Killed 13 people, more than 70 were injured.
In the course of the attack, one of the old houses of historical value suffered. 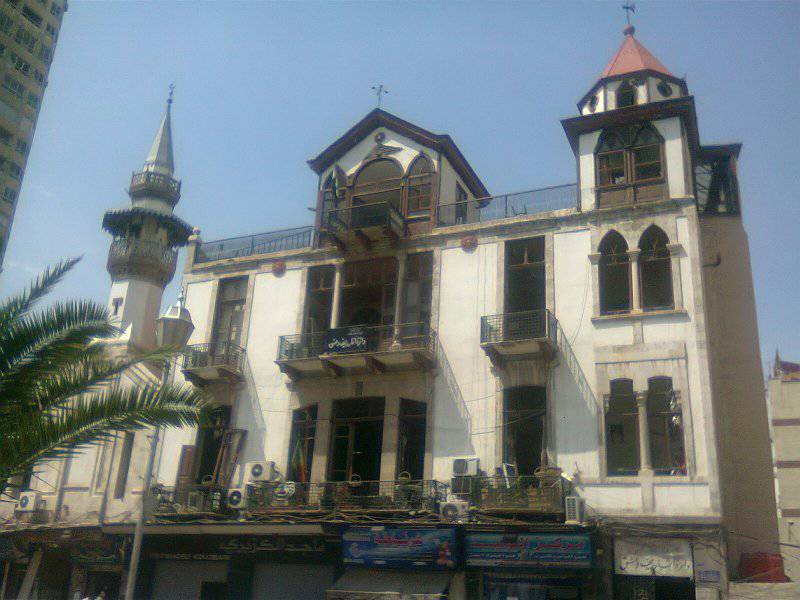 In the mosque, located nearby, broken windows. 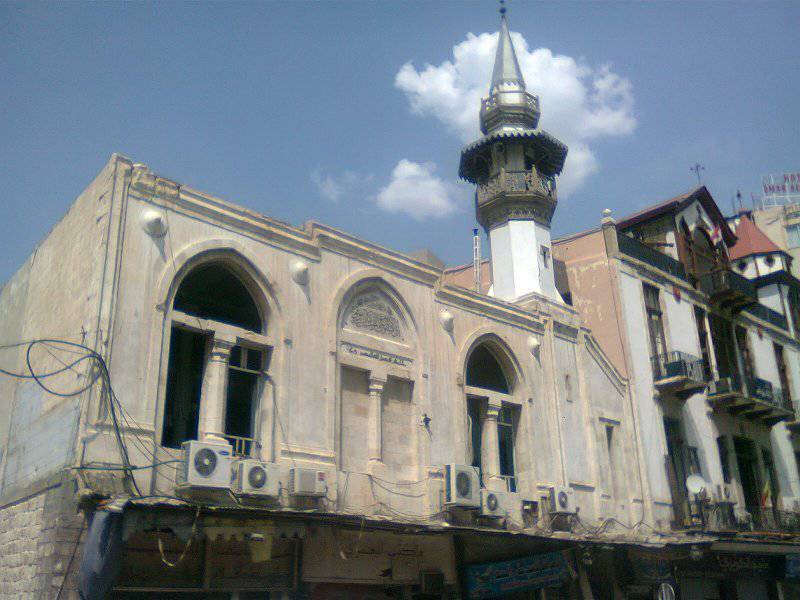 The material damage was caused to the huge building of the office center, the office of the leading mobile company Syriatel, and many shops. 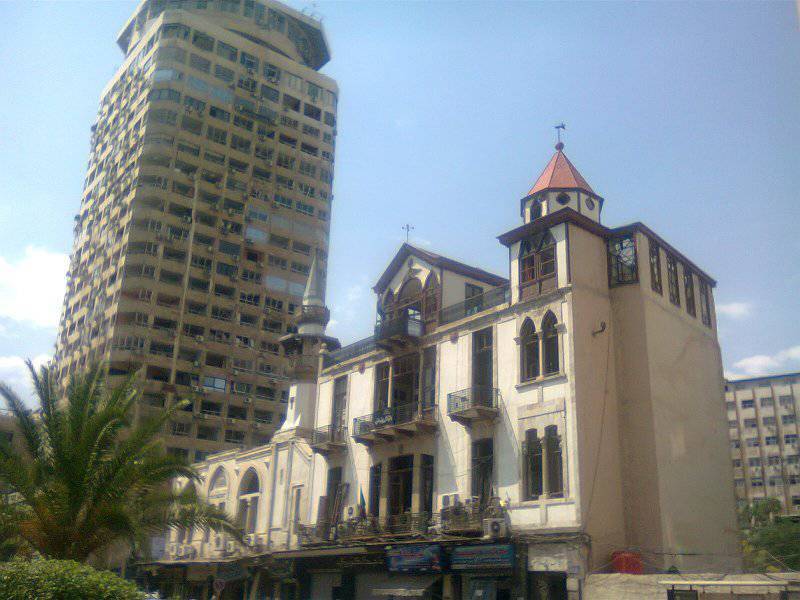 1 May, when Syria celebrated the International Workers' Solidarity Day, two explosions thundered in the capital. On Khaled Bin Walid Street, an explosive device was laid in a shop, and a mined bike was blown up on Bab Musalla Square. Two people died, one of whom is a 10-year-old child. 28 affected.

In the province of Tartus in the village of Al-Beida, located near the town of Baniyas, the imam, the preacher of the mosque Omar Biyasi, was cruelly murdered along with family members. He was avenged because he rejected radical Islamist ideas.

In the province of Idleb in the city of Sarakeb, gangsters carried out petty provocations with chemical weaponstaking advantage of ridiculous chance. A poisonous liquid was stored in one of the houses, and one of the children accidentally opened this container. From evaporation killed two people who were in the house. The remaining family members fled from their homes.

The militants of the “opposition” learned about this domestic accident. Putting on gas masks, they took with them three previously abducted citizens and headed to the unfortunate house. There the prisoners were forced to breathe poisonous substance. Then the bodies of all five victims were transported to Turkey and said that the Syrian military used chemical weapons against them.

Turkish Prime Minister Recep Tayyip Erdogan, a major supplier of weapons to terrorists, an accomplice to the looting of Syrian enterprises (who was called the thief of Aleppo), broke out with a sharp anti-Syrian statement.

At a meeting with party members in Ankara, this war criminal who played an unseemly role in stirring up the Syrian crisis, called the president of the SAR Bashar Al-Assad a "butcher" and a "murderer." But this unfinished Turkish “sultanish” took the liberty to speak on behalf of God - he declared that President Al-Assad was waiting for God's wrath. And such words Turkish Prime Minister issued after Damascus were inflicted by Israeli air strikes! Netanyahu didn’t hear such angry words from Erdogan’s lips.

Erdogan added: “The Turkish people are not inclined to hide their opinion for the sake of political correctness and always speak the truth” and even condemned the “international community” for delaying with the intervention in Syria. I took to speaking on behalf of the whole nation, knowing full well that the majority of Turkish citizens strongly oppose their anti-Syrian actions. In particular, recently in many Turkish cities a grand festival of the world and mass popular demonstrations took place, the participants of which expressed solidarity with Damascus resisting world terror.

In order to understand who is really a real butcher, and who really represents his people, it is enough to compare, as 1 May Day was celebrated in Syria and Turkey.

In Syria, President Bashar Al-Assad congratulated all workers on the holiday. Moreover, he did it not from his office, but at one of the Damascus power plants. Standing in the circle of workers in helmets, the Syrian leader praised the dedication of the workers and thanked them for the fact that during the whole confrontation the common people had proved their ability to strengthen the country, despite the attacks of terrorists. He honored the memory of the workers who were killed by the gangsters, and stressed that the terrorists and their owners are trying to plunge Syria into darkness - and in the ideological sense, and simply depriving the citizens of all benefits, including electricity. But the working people did everything to thwart these plans in order to provide the people with everything they need, and this is one of the factors of the country's resilience in the face of terror, the president stressed. 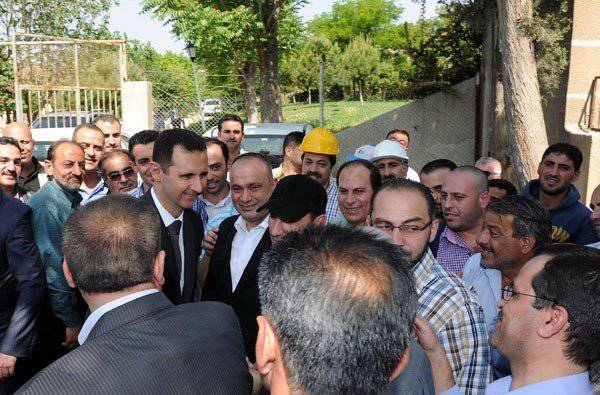 Usually, demonstrations are held in Syria on this day, but with the efforts of terrorists and those who help them, such as Erdogan, mass events are practically not held now. But Erdogan not only disrupted the Syrians' holiday demonstrations - he forbade holding them on his territory.

In Ankara, the 1 day of May was clouded by clashes with the police. Water jets and tear gas were used against the demonstrators. Many people who had the courage to go out were brutally beaten by the police. The Turkish authorities called these workers "marginal", justifying their brutal actions. And what kind of “democracy” after that can Butcher Erdogan talk if he is her executioner? If all his vaunted "democracy" - is it batons, water cannons and gas?

Syria celebrates Day of the Fallen

6 May Syria celebrates Day of the Fallen. In 1916, on this day, 16 resistance heroes to the Turkish invaders were executed on Marjah Square. Of course, Erdogan will not remember such a thing, as Turkish satraps dealt with Syrian patriots.

On these days, ceremonies in honor of the relatives of the dead servicemen and civilians are held in all the provinces. Posthumous awards are presented to mothers and wives of heroes.

Patriotic meetings were held in all military units. To the memorial to the Unknown Syrian Soldier, the military laid wreaths. A military delegation led by Chief of the General Staff Ali Abdullah Ayub visited the wounded in the hospitals of the capital.

A few days earlier, on May 4, on the occasion of the Day of the Fallen, a major patriotic event was held at the University of Damascus, in which President Bashar Al-Assad took part.

In the presence of thousands of students and family members of the victims, a memorial was opened with the names of young martyrs. 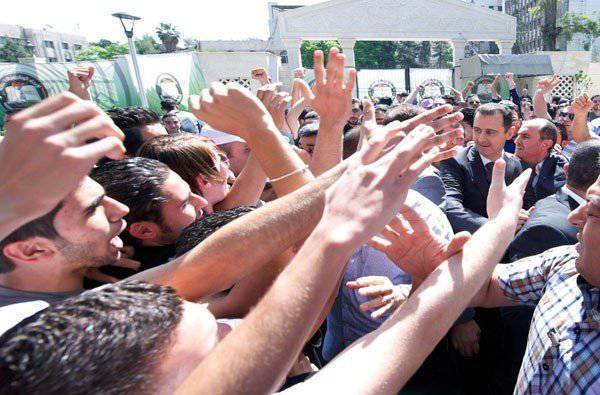 The head of state talked to the relatives of the students killed by the terrorists. He said that the crimes were directed against young students, because terrorists hate those who seek to oppose science and culture to their dark ideas, in which there is nothing but murder and destruction. Fighting them includes, among other things, acquiring knowledge. He commended the fact that Syrian students decided to continue this path even under fire.

Bashar Al-Assad added that terrorists are waging war against the entire Syrian people, against knowledge and enlightenment, as evidenced by such crimes as the destruction of the monument to the great thinker Abul-al-Al-Ma'arri in the city of Maarrat An-Numan, the explosion of an old suspended Bridge in Deir ez-Zor - one of the most important attractions of the country, and much more.

“Syria has given the world an alphabet, and this has allowed humanity to begin recording its history. Syria has made a huge contribution to science, literature, architecture. She wrote and will continue to write the glorious history of the struggle for independence, relying on all her sons, ”the president said.

Ctrl Enter
Noticed a mistake Highlight text and press. Ctrl + Enter
We are
What you didn't want to know about EnglandInterview by President Bashar Al-Assad to the Sunday Times
59 comments
Information
Dear reader, to leave comments on the publication, you must to register.