13 May 2013
21
There were a lot of attempts to create a submachine gun that could be worn really hidden by people of even the most modest dimensions, without causing suspicion among others, and just a variant of the compact submachine gun. Among such samples there were a lot of interesting models, but most often they did not receive even minimal distribution while remaining unclaimed. There are no common reasons for the fact that truly compact submachine guns were not spreading most quickly, because every such model weapons had its own negative qualities that did not allow her to become a mass. Sometimes this was a low reliability, sometimes the cost of production, and sometimes simply the inability to normally shoot a weapon because of the peculiarities of its design. There were also such samples in which all these "diseases" were present together. This was due primarily to the fact that the designers were very creative in their work and, in pursuit of reduced dimensions, even invented their versions of the automation system, and given the fact that the new designs were not worked out and not run in, then there is nothing strange that there were problems. In general, I personally believe that the creation of new designs with a fundamentally different design is very useful, you can even say that it is more useful to create one bad but unique sample than 100 using already known and proven schemes that will not add information to the collection of knowledge of designers absolutely nothing. An unsuccessful sample, even if it is still “stillborn,” will show everyone that it should not be done this way, or it is necessary to wait until the development of science reaches a level where all our plans can be carried out with sufficiently high quality and relatively cheap. In this article, I propose to get acquainted with this sample, which is quite simple, has an original scheme of automation, is compact, but it could not become common. It will be about the MGD submachine gun and its version chambered for the 9х19 MGD PM-9.

The author of this weapon is the Frenchman Louis Debyuy, who was tasked with creating a lightweight and compact submachine gun under the then-popular in France pistol cartridge M1935 with the metric designation 7,65x20. It was at the end of the 40-ies, which adds even more respect to the weapon, or rather to its author, since usually the original designs of the weapons date back to the late nineteenth - early twentieth century, later everyone preferred to stick to the already developed weapons designs. It even went so far that the weapons were allowed into the series, but very small. Subsequently, the cartridge 7,65х20 was replaced by 9х19, which required a change of the weapon itself, and since the characteristics of the ammunition are different, the automaticity of the gun itself had to be counted. Unfortunately, it was possible to adapt the weapon to a more powerful ammunition with great difficulty. In order to achieve at least some reliability and durability of the weapon, very high precision of fitting and machining parts was required, which was not at all cheap. As a result, only about 10 units of weapons chambered for 9x19 were released, and then everything ended. 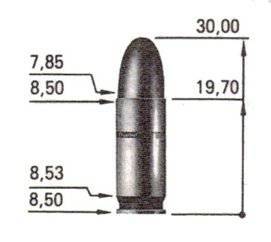 Since the 7,65х20 ammunition, it can be said, was the main one for this particular submachine gun, I think you need to write a couple of lines about it, especially since this cartridge was once a fairly common ammunition. This munition was developed in 1925 for one of the new pistols, but at that time neither the weapon nor the munitions were accepted for use and were not distributed. Subsequently, the cartridges were slightly modified and were adopted under the designation М1935, in this form of ammunition and used in the submachine gun. This cartridge was loaded with a 5,6 gram bullet, which, when fired from the MGD PP, moved at a speed of 305 meters per second, that is, the kinetic energy of the bullet was somewhere around 260 Joule, which naturally was not enough to meet the needs of the military. However, until the end of the Second World War, these munitions lasted, and in 1945, they were replaced by 9x19, although not immediately, which can be seen at least in the considered PP model.

Since the designer conceived the virtually impossible, namely the creation of a compact version of a submachine gun with a full barrel length, I had to dream a little. The solution was found at the same time as a standard and somewhat unusual implementation. First of all, it was decided to embed a folding frame butt in the design of the weapon, which at the same time was an emphasis for the shoulder and a grip to hold it. The solution turned out to be far from the most convenient, but it made it possible to significantly reduce the dimensions of the weapon in the folded position. Despite this, the submachine gun remained one more detail, which significantly increased its dimensions and did not allow to carry a weapon hidden and comfortable, this detail was the store. Of course, it was possible to go along a simpler path and suggest wearing a submachine gun without a magazine, but then additional time would be required to bring the weapon into combat readiness, which was great because of the folding butt, without which it was simply impossible to fire. For this reason, the designer decided to introduce into the design of the submachine gun a rotary receiver of the store, which allowed the store to be placed parallel to the barrel of the weapon when turning. Naturally, at the same time it was impossible to fire a weapon, except to fire the cartridge that remained in the chamber.

But that's not all. In order to make the weapon more compact, the designer decided to use a somewhat unusual semi-free-form automation system. The light shutter of the weapon moved along a completely normal trajectory, but its free movement was limited by one spring-loaded part, namely, a disk having a figured protrusion for an emphasis of the shutter. The disc itself was associated with a spring, working on twisting. Thus, when fired, the powder gases pushed the bullet forward, and through the sleeve they made the bolt move backwards, and although it was light, its weight was enough to save the energy obtained from the powder gases for a full recoil. In the process of moving the bolt back, the cartridge case was removed from the chamber and was thrown away, while the bolt itself, resting against the shaped notch, forced the spring-loaded disc to turn, compressing the return spring. Separately, it should be noted that the effort to turn the bolt applied differently at each point of its turn, which significantly reduced the recoil of the weapon; In addition, the movement of the disc, despite its not-so-great mass, affected the convenience of holding the weapon, so it was noted that the barrel of the submachine gun rather strongly leads up when firing bursts, although I think this phenomenon is very far-fetched.

The length of the weapon barrel is 213 millimeters. The total length of the weapon with millimeters folded butt 359, with millimeters 659 laid out. The weight of the machine gun is 2,53 kilograms, and the rate of fire is 750 rounds per minute. It feeds weapons from detachable stores with a cartridge capacity of 32. Considering that the weapon did not use the most successful 7,65x20 cartridge, the effective range of use was no more than 100 meters, but taking into account the not very convenient butt used, like the handle of the weapon, this distance would hardly have reached more than 150 meters even if used 9x19. Still, whatever one may say, ergonomics also plays a significant role in the effectiveness of a weapon, especially when it is close to zero.

It is difficult to say whether the designer managed to achieve the task. On the one hand, the model for its years turned out to be really compact in the folded position, but was this compactness worth such sacrifices worth it? Although, on the other hand, a compact submachine gun is a rather specific weapon and is not suitable for ubiquitous distribution, but where such a weapon may be needed, you can sacrifice something for the sake of compactness. 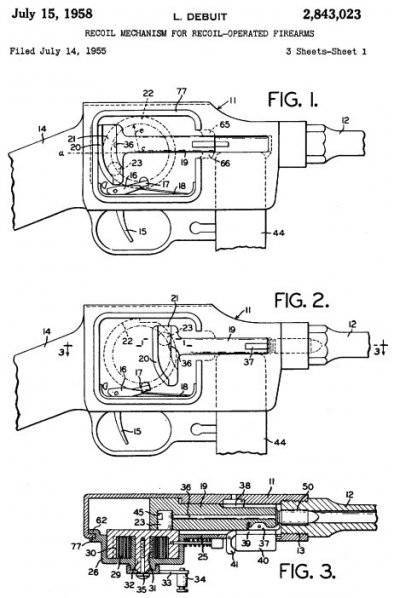