16 May 2013
7
The Swedish defense industry is known for its non-standard solutions. The Saab 35 Draken fighter differed from all the planes of other countries, the Strv 103 tank did not have and has no foreign counterparts, and the Bandkanon 1 self-propelled artillery mount has held the rate of fire record for a long time. Swedish gunsmith designers with the help of original technical solutions managed to bring the rate of fire to fantastic for its time values. In the early sixties, when this self-propelled gun appeared, only multiple rocket launchers could use 14 rounds of ammunition in less than one minute. 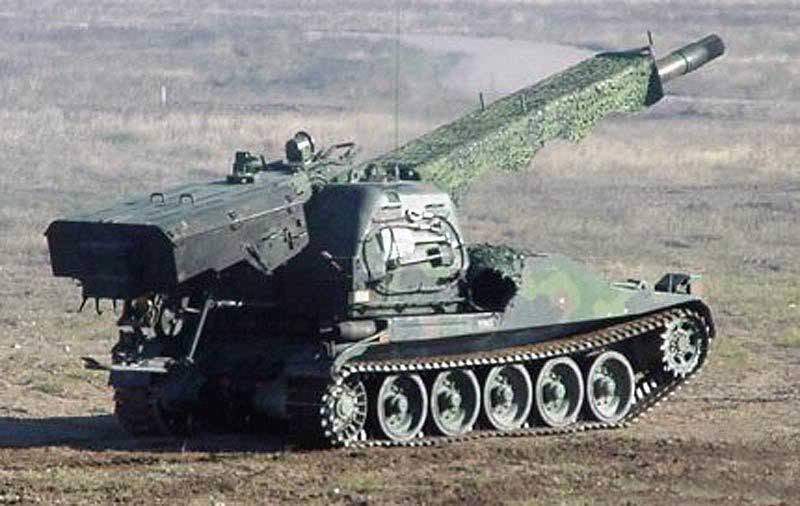 Development of ACS Bandkanon 1 began in the mid-fifties of the last century. The company Bofors received an order for the creation of self-propelled gun caliber 155 millimeter, which in the near future was to replace similar systems of foreign production. From the new self-propelled guns required the highest possible rate of fire, so that the battery of such machines could inflict serious damage to the enemy as soon as possible and, if necessary, with another such blow, finally, resist. This requirement ultimately determined the appearance of the combat vehicle.

As a basis for the new self-propelled gun mount, one of the prototypes of the tank chassis, created under the KRV program, was chosen. Shortly before, this caterpillar chassis was abandoned in favor of another, on the basis of which the Strv 103 tank was eventually built. Moreover, both chassis, and tank, and selected for self-propelled guns, had a high degree of unification, which later slightly facilitated the operation of equipment. During the creation of the Bandkanon 1 chassis has undergone some changes. Due to the nature of the work of the future self-propelled gun, it was facilitated by reducing the level of protection. After refinement, the maximum thickness of the shell sheets did not exceed 20 millimeters.

In front of the armored hull placed engine compartment. Inside it was a monoblock power plant, in which the engines and transmissions were assembled into a single unit. Of particular interest is the composition of the power plant. For driving on the highway, the Bofors designers suggested using a relatively low-power but economical Rolls-Royce K60 diesel engine with a total horsepower of 240. With a combat mass of 53 tonnes and a specific power of less than five horsepower per ton, the Bandkanon 1 ACS could accelerate onto highways just up to 15-20 kilometers per hour. Naturally, such performance did not suit anyone. To compensate for the insufficient performance of the diesel engine, the 300-powerful Boeing 502-10MA gas turbine engine was included in the power plant of the new self-propelled guns. It was assumed that when driving off-road combat vehicle will use both engines simultaneously. On two Bandkanon 1 engines could accelerate to 27-28 kilometers per hour, but in this case, one refueling (1500 liters) was enough for only 230 kilometers, which, however, was considered sufficient for service in Sweden. 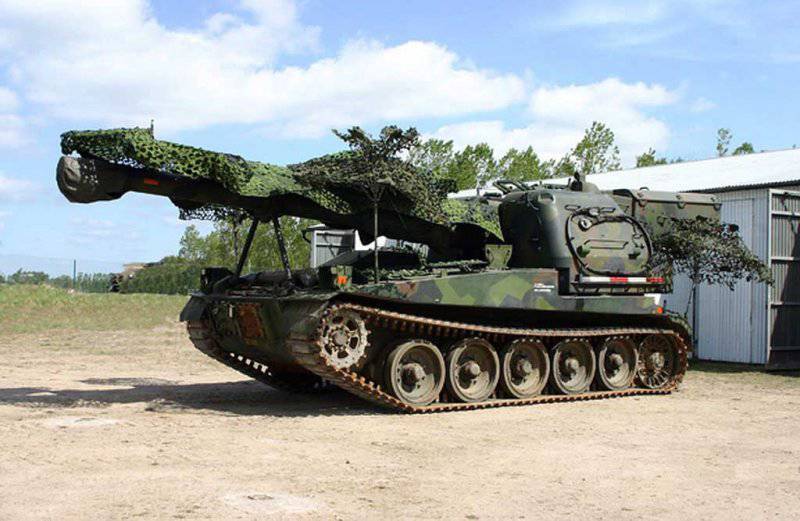 The chassis of the ACS had six road wheels with a hydropneumatic suspension on each side. It is noteworthy that the rear rollers also functioned as guide wheels. The drive wheel with the pinching gear of the caterpillar was placed in front of the hull, noticeably carrying it forward and up. When firing, the self-propelled chassis could "squat" for less swaying of the machine and greater accuracy of fire. Due to the high rate of fire, Bofors experts considered the stability of the ACS behavior to be an important parameter and tried to improve it as much as possible.

For the engine compartment, with a shift to the left side, on the Bandkanon 1 there was a workplace for the driver. The remaining four crew members during the march and shooting were located in the swinging tower. The design of the tower of the Swedish self-propelled gun still has no analogues abroad. Some units of the tower are located below the level of the roof of the hull, but its main elements are higher. The outer part of the tower consists of two armored boxes with crew jobs and all the necessary equipment. Between these boxes was placed a weapon with recoil systems. In the left part of the divided tower were the places of the commander and the gunner, in the right - the gunner and loader. The large tower could only turn 15 ° to the right and left of the vehicle axis. Vertical tool pointing angles are from -2 ° to + 38 °. When using manual guidance mechanisms, the elevation angles of the gun slightly increased.

Requirements for the highest possible rate of fire affected not only the design of the ACS, but also the work of the loader. In fact, he had only to manage the loading of shells, and then she did everything herself. The fact is that the 155 caliber millimeter cannon was equipped with an original loading system that provided him with a high rate of fire. All units of the gun, connected in one swinging module, were located outside the fighting compartment, between the two halves of the turret and covered with armored covers. Behind and above the breech of the gun was a special container-shop for 14 shells. Before firing into the container with the help of an auxiliary machine with a crane, a cassette with two rows of shells, seven pieces in each, was placed. The first ammunition was manually fed into the rammer tray, after which the crew could take their places in the fighting compartment. 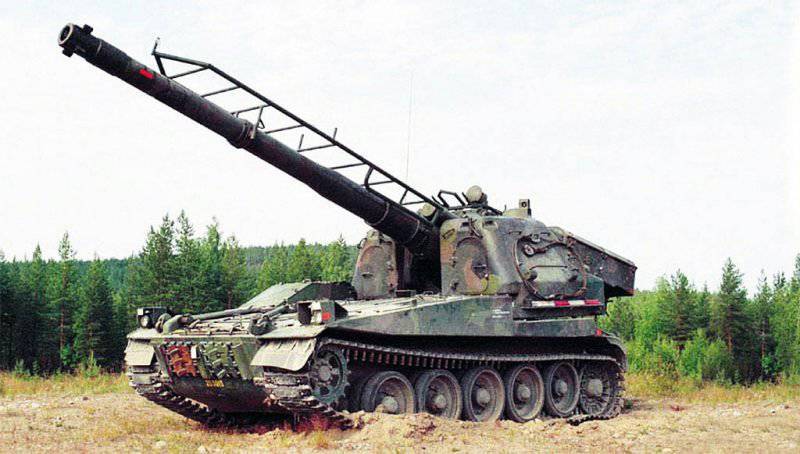 After such training, the crew had to bring the Bandkanon 1 self-propelled gun to the position, aim, select a fire mode (single or automatic) and press the trigger. Further, the howitzer cannon and the associated systems independently produced the necessary number of shells at the enemy. When rolled back, the instrument cocked the system of the load, springs and levers, which, after the breech returned to its original position, fed the new projectile onto the loading tray and sent it to the chamber. The 14 charging shop was empty in just 48 seconds (about 3,5 seconds between shots), which is still a record among the barrel artillery systems.

After firing, depending on the situation, the self-propelled gun could leave the position or recharge directly on it. To reload the gun was raised, and her shop was at a low altitude. An empty cassette was removed from the shell container, and a new one was placed in its place. For all procedures related to the reloading of the container store, it took no more than two minutes. After this time, the Bandkanon 1 ACS was again ready to fire.

The standard self-propelled artillery ammunition was an 155-high-explosive fragmentation projectile. Ammunition weighing kilograms in 48 was sent to a distance of 25 kilometers. According to some sources, the possibility of creating special nuclear weapons was seriously considered. In the late 1950s, Sweden declared that it could become a nuclear power in the foreseeable future. Probably, the Bandkanon 1 self-propelled gun could have become one of the types of equipment capable of using nuclear weapon. Just a few years after the announcement of the possible start of a military nuclear program, Stockholm abandoned such plans and, until the very end of operation, new self-propelled guns fired only conventional shells. 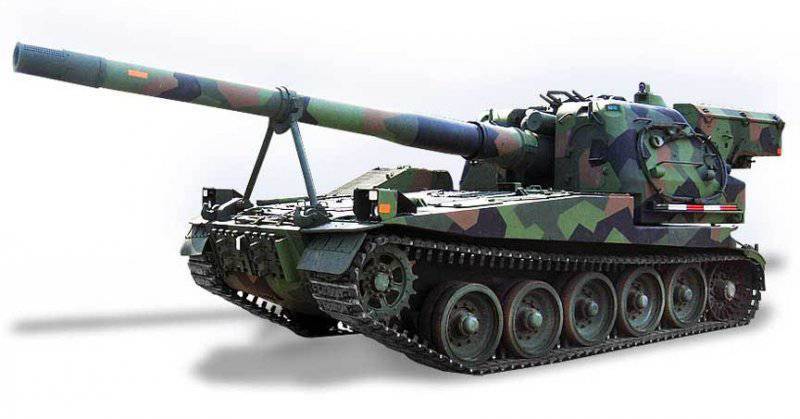 The first Bandkanone 1 prototype was made in 1960 year. His tests were not simple, because the complexity of the original automation was affected. However, the customer and the developer did not stop working and brought the ACS to mind. The contract for the supply of new self-propelled guns signed in 1965 year. According to this document, Bofors pledged to build the first batch of 26 combat vehicles. For financial reasons, the Swedish armed forces soon abandoned their original plans. At the beginning of the decade, they were going to purchase at least 70 self-propelled guns, but later this number was considered redundant. Bandkanon 1 production was completed in 1968 year.

In 1988, the Swedish Ministry of Defense ordered the development of a project to upgrade existing self-propelled guns. He was not satisfied with the characteristics of the power plant and outdated electronic equipment. In the course of this modernization, Bofors changed the K60 diesel engine to Detroit Diesel 6V-53T horsepower 290, and also changed the transmission. Gas turbine engine remained the same. As a result, the maximum speed of the ACS increased slightly, and the fuel consumption dropped noticeably. The use of new elements of the power plant made it possible to increase the degree of unification with the Strv 103 tank, which was already equipped with such engines and transmissions. Modernization of electronics meant the replacement of a ballistic computer, night vision devices, etc.

For several years, all self-propelled guns in the army underwent modernization, after which they received the name Bandkanon 1C. The name of the basic version, in turn, was added with the letter “A” for convenience. In 1993, two self-propelled guns went through another upgrade, during which they installed the Honeywell MAPS navigation, data transfer and fire control system. Tests of the updated self-propelled guns were successful, soon the rest of the remaining Bandkanone 1C fleet was brought to the same form.

ACS Bandkanone 1 never participated in hostilities and fired only in terms of exercises. However, the exercises also revealed the strengths and weaknesses of the self-propelled guns. First of all, the rate of fire showed itself well. Several ACSs, working together reliably “plowed up” the indicated square, destroying learning objectives. Often the results of one attack were such that the second volley was no longer required. However, good fighting qualities were more than compensated for by poor running gears. The maximum speed on the highway is less than 30 kilometers per hour and the huge fuel consumption leveled all the advantages. In 2003, rapid-fire, but slow on the road, ACS Bandkanon 1C was sent to the storage bases. Their place in the troops was taken by new self-propelled artillery mounts FH77BW L52 Archer with a gun of similar caliber, but with higher combat characteristics and much cheaper wheeled chassis in operation. The maximum rate of fire of the automated guns of this SAU does not exceed 8-9 rounds per minute, but thanks to the MRSI (Multiple Round Simultaneous Impact) shooting method, it corresponds to the Russian term "barrage of fire" by its efficiency is not inferior to the old rapid-fire Bandkanon 1С.