Anti-Russian side of the Circassian issue 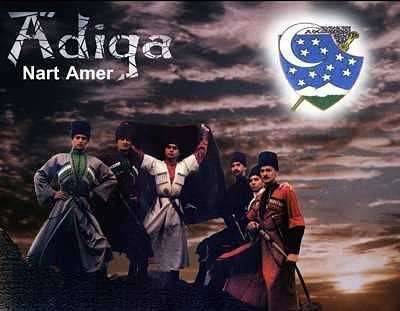 In the 9 days of May holidays, which were donated to Russians at the legislative level this year, a very interesting event from the point of view of Russia's authority in the international arena was almost lost. We are talking about a rather strange appeal (by the way, not the first) of several Circassian organizations of the North Caucasus of the Russian Federation to President Vladimir Putin. This letter consisted of two parts, which should be commented on separately.


In the first part of the appeal to the President of Russia, representatives of Circassian public organizations of the Krasnodar Territory, the Republics of Adygea and Karachay-Cherkessia ask to pay attention to the difficult situation of the Syrian Circassians. The appeal, in particular, states that the humanitarian catastrophe in Syria is gaining momentum, and that the number of Circassian refugees, whose ancestors once inhabited the Russian Empire, is rapidly increasing. Moreover, Circassian refugees are accepted by various states: Turkey, Jordan, Lebanon, while Russia is still somewhat distancing from this problem. (In fact, over the past two years, up to 1,5 thousands of Circassians arrived in Syria from Russia. Really did not know who applied to Putin? Everything was well known, just the whole essence of the appeal lies in the second part of the “letter” - author's note). In this regard, Vladimir Putin was called upon to quickly draw attention to the difficult situation of Circassian refugees trying to escape from the war in Syria, and to enable them, as descendants of compatriots, to return to the territory of Russia. At the same time, there are words in the address that seem to hint at the Russian president that it will be good if Russia meets refugees of Circassian nationality from Syria, and that it will be very bad if the same Circassian refugees continue, let's say, to settle on the territory of other states or remain in Syria.

We give a specific quote from the circulation:
Representatives of the Circassian community in Syria may be in the focus of the active influence of the special services of the states hostile to Russia in the region, which in the long run threatens security in the North Caucasus region. In contrast to this, the Circassians of Syria who have arrived in Russia are under the effective control of state institutions and are actively integrating into the Russian sociocultural space.

Obviously, in these words there is, if not a threat, then some warning that it’s time for the Kremlin to start thinking about the issue of the Circassian population who would like to return to Russia.

Of course, in the return of the Circassians to historical There is nothing reprehensible to the homeland of their ancestors - to the North Caucasus. And, perhaps, the issue of providing some simplified options for a stable entry into Russia of the Syrian Circassians would be resolved over time. But…

This “but” appears after the publication of the second part of the letter from all those Circassian public organizations operating in the territory of the North Caucasian republics, as well as the Krasnodar Territory. The second part of the letter is not even a message to the president of Russia, but the most real extension of a parallel demand. It turns out that the authorities of the Russian Federation not only have to open a corridor for the Circassian refugees from Syria to enter the country, but still, no less, recognize the genocide of the Circassian people in the 19 century by the authorities of the then with all the consequences ...

Obviously, the authors-writers of this appeal to the President of Russia, who missed this appeal through several news outlets, are still in a certain euphoria about what happened in the 2011 year in Georgia. 20 May official Tbilisi recognized that the Russian Empire, they say, committed the Circassian genocide during the Caucasian Wars. The question is, what attitude does Georgia have to the recognition of the so-called genocide of the Circassians in Russia of the 19 model? Yes, in principle, no ... Just then the Georgian authorities were looking for any attempt to at least annoy Russia after their failure in South Ossetia and the loss of both South Ossetia proper and in addition to Abkhazia.

Exactly at the same time (2011 year) maps of "Great Circassia" began to be published - a state that, according to Georgian and American "cartographers", once extended from the Black Sea in the south to the Sea of ​​Azov in the north, from the Taman Peninsula in the west to modern Grozny on east. The fact that no Greater Circassia has ever existed in the Caucasus, and in its place far different tribes did not coexist peacefully, led by princes who were eager for neighbors' good, were of little concern to those “cartographers”. Indeed, modern “democratically” minded forces present history and historical geography not in a form that coincides with objective reality, but in a form that is convenient for them. Based on the hastily concocted map of "Great Circassia" and the Georgian president personally recognizing the genocide of the Circassians in the Russian Empire, the first slogans were heard about the creation of an independent Circassian state in the place where the Russian North Caucasian republics are today. It is noteworthy in this story that the inhabitants of the North Caucasus themselves (well, the same Circassians from Karachay-Cherkessia, for example) were not going to ask. You give independent "Great Circassia" - and that’s it ...

However, after Mikhail Saakashvili began to rapidly lose his overseas support, and the so-called democratic Circassian communities somewhat diminished in terms of talk about the need for the Russian authorities to recognize the genocide of their ancestors. And today - new slogans, new requirements. What is it for?..

In fact, there is no big mystery here. Saakashvili as an experimental policy for taking measures to destabilize the situation in Russia is a material, from the point of view of the West, worked out. The new “biomaterial” with the more tenacious grip of the same West (in the broad sense of the word) did not have time to grow, but apparently managed to compare such events as the Sochi Olympics and the “unresolved question of the Circassian people.” Well, this is about the same thing that was observed in Tibet on the eve of the Beijing Summer Olympics: the hysterical cries that China organized the Tibetan genocide infringes on its rights and does not allow Tibetan monks to develop democratically ... At the same time, people from Lhasa appeared, where people in orange Tibetan robes (not the fact that Tibetans) arrange for the self-immolation, protesting against the holding of the Olympics in the capital of China. And at the same time, Western media quickly got hooked on protest actions that Tibetan “refugees” were conducting in other countries of the world.
And now a kind of deja vu. So far, thank God, no self-immolations, but, for example, in Turkey there are rallies of people in black clothes with green flags and banners, which read slogans that Sochi is a place of genocide of the Circassian people. Who are these shares for? So it is known on whom. On the main defenders of the "democratic" principles in the universe. Perhaps one of the star athletes will see such a broadcast and say: well, no, I will not go to the Olympics in Sochi, because they were exterminating people there. Who, whom, when and for what reason he exterminated, and whether he exterminated at all - here is the tenth point, the main thing is to attract “democratic” attention.

That is why the appeal of those Circassian public organizations to President Putin is nothing but a pure provocation. Surprisingly, this letter did not yet include a clause stating that Russia should urgently recognize the independence of the “Great Circassia”, retreating to about the current Rostov-on-Don ... And the only antidote to any provocation is to highlight the historical truth. And this historical truth suggests that the so-called genocide of the Circassians is a concept that began to be actively cultivated only after the collapse of the Soviet Union, with the explicit goal of continuing the fragmentation of a large country.

How can one generally speak in this case about some kind of genocide, if for centuries the same Circassians (to which, generally speaking, several Caucasian peoples belong) did not just maintain their cultural identity, traditions, language, but also got their own republic. Is there a lot on the map today you can find the Circassian republics in the Middle East, where several thousand Circassians emigrated from Russia in the 19 century?

How can we talk about some kind of genocide of the Circassian people, if it was the Russian army that actually saved them from slave labor, which was exploited by the local princes. By the way, it was the liberation of ordinary Circassians from serfdom in the North Caucasus, and was the cause of the anger that the then Circassian nobility was harboring on Russia. It seems that it is on this genetic malice of the descendants of the Circassian nobility that the forces interested in weakening the Russian positions in the Caucasus are now trying to “leave” skillfully.

Well, in general, the closer a large international event, such as the Russian (Sochi) Olympiad, the more the new truth about Russia will be born. Nothing ... The Chinese have survived, Russia will survive too ...

Ctrl Enter
Noticed oshЫbku Highlight text and press. Ctrl + Enter
We are
Refugees from Syria. Will Russia accept immigrants from the Middle East?Situational analysis of the death of the MH17 flight (Malaysian Boeing 777), made on the basis of engineering analysis from 15.08.2014
119 comments
Information
Dear reader, to leave comments on the publication, you must to register.