The whole world against Hitler

9 May 2013
159
In World War II, the 61 State, military action were led in the territory of 40 countries. The armed forces of Great Britain, France, China and the United States participated in the struggle against the states of the fascist bloc. Separate formations of Poland, Czechoslovakia, Yugoslavia, Australia, Belgium, Brazil, India, Canada, the Philippines and other countries of the world also took part in military actions. Another part of the anti-Hitler coalition states helped the main participants with supplies. 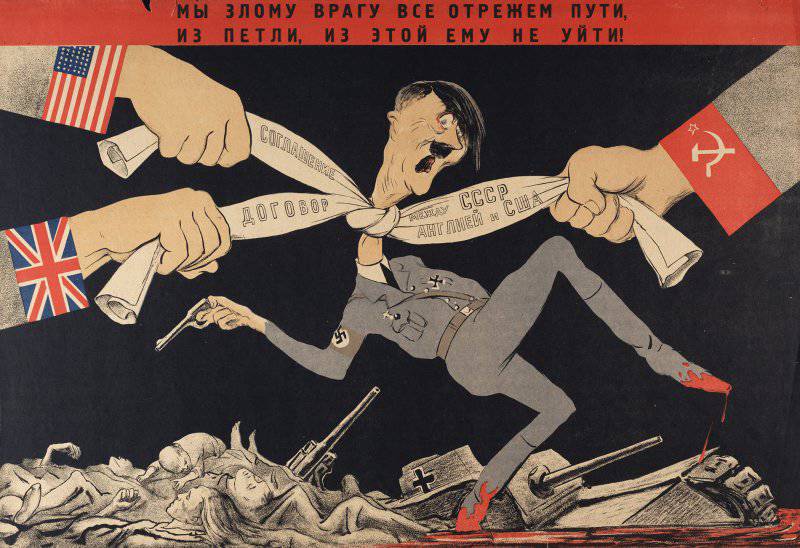 Under the Lend-Lease (agreement to transfer to the leasing of military equipment, weapons(ammunition, equipment, strategic raw materials and food) at the end of September 1945, 14.795 aircraft were sent from the USA to the USSR, 7.056 tanks, 8.218 anti-aircraft guns, 131.600 machine guns. From Great Britain on April 30, 1944, 3.384 aircraft and 4.292 tanks arrived. 1.188 tanks were delivered from Canada (official US data). Part of the US cargo (about 1 million tons) did not reach the Soviet Union, since it was destroyed by the enemy during their transportation. US military supplies accounted for 4% of the military production of the USSR. In addition to armaments, the USSR leased cars, tractors, motorcycles, ships, locomotives, cars, food and other goods.

Help came from individuals. The American Committee for Assisting Russians in War during the Second World War sent goods worth more than one and a half billion dollars to the Soviet Union. In England, there was a similar committee that was headed by Clementine Churchill.

In June 1944, the Allies opened a second front in Western Europe. An Anglo-American landing force landed in Normandy, which ultimately made it possible to pull about 560 thousands of German soldiers from the Eastern Front.

Alexander Manachinsky, a retired colonel, RecallsThat Lend-Lease is not a grant for help. Roosevelt publicly stated that "helping Russians is successfully spent money." Lend-Lease became a tool, with the help of which the White House was planning to solve a number of problems - both foreign and internal. The leasing scheme allowed the US government to create new jobs. If in 1940, 47,5 was employed by a million people in civilian production, and 8,1 had no jobs for millions of Americans, then in 1942, the US economy absorbed all this unoccupied labor. Full employment in the United States was celebrated until the victory.

In 1941, writes A. Manachinsky, US Undersecretary of State D. Acheson arrived in Moscow to find out the payment possibilities of the USSR. By order of Stalin, an overseas official was taken by plane to Magadan, then to Kolyma. Here the American gold mines were shown. After that, America began to help Russia. For the US aid during the war years, the USSR paid in gold. Every month an American submarine came to Magadan, on which Russian gold was loaded as payment for weapons, equipment, and food. By 1949, the greatest amount of gold accumulated in Fort Knox vaults - 21.800 tons ...

The assistance to the Soviet Union in its exhausting struggle against the Nazi invaders, New Zealanders, Ethiopians, Icelanders and people from other countries is far less popular with the United States.

Journalist-internationalist Sergei Brilev wrote the book "Forgotten Allies." The author paid particular attention to the peoples who were not attacked by Hitler or Mussolini, but who nonetheless declared war on fascism. Sergey Brilyov told the correspondent "Voices of Russia" Dmitry Babich that unites almost all people of the globe.

“Perhaps, the general thing that then really united almost everyone was the rejection of the racial theories of the Nazis. Although in fairness it must be said that at that moment not everything was positive with racial issues in the British Empire and in the United States. ”

Unjustly forgotten was participation in the war with the Italian-German invaders of the Ethiopians - led by their emperor Haile Selassie the First. But it was he who first defeated the fascists, returning to his capital after the expulsion of the Italians from there in 1941 year. Until the end of 41, the fascists seemed invincible: they did not have a single major defeat either on the Eastern Front or on the Western.

In the Russian Far North, in the Kola Peninsula region, the 151-I British squadron commanded by the New Zealander Neville Ramsbottom-Isherwood fought. Britain had just declared war on Finland, and the Finns did not dare to go to Murmansk protected by Isherwood.

The indigenous New Zealanders of the Maori tribes, Ischerwood's compatriots, fought on the fronts of Europe. In the battles, they lost every fifth.

In German propaganda, the main place among the "subhumans" was given to the Slavic peoples. Sergey Brilyov says:

“The main driving force behind the resistance to the German occupation were those peoples who were declared inferior by the Nazis. These are the peoples of Poland, the former Yugoslavia and, of course, the Soviet Union. If we talk about resistance in the occupied territories, then the resistance of these particular groups is quite understandable: after all, these were people whom the Germans declared racially inferior, and besides, among these peoples lived peoples who were not at all loved by the Nazis with their racial theories - for example, Gypsies and Jews. <…>

Alexey Baliev ("Century") recalled the assistance to the Soviet Union of Brazil and Argentina, Mexico and Nicaragua, Iran and Iraq, the Belgian Congo and Liberia, Afghanistan and Nepal and a number of countries and territories. In real economic terms, this assistance was often symbolic; nevertheless, it reflected the attitude of the peoples of many countries towards the heroic struggle of the Soviet Union against fascism.

Humanitarian supplies from Afghanistan to the USSR (through Turkmenistan, Uzbekistan and Tajikistan) began in November of 1941 and continued until the spring of 1947. Up to 8 thousand tons of raw cotton and cottonseed oil, about 20 thousand tons of meat and meat products, up to 40 tons of medicinal herbs, 6 thousand tons of citrus fruits, about 6 thousand tons of tea leaves, about 7 thousand tons of olives and olive oil, up to 300 tons of wool and hides, about 3000 heads of sheep, horses, yaks, camels. Afghan Turkmen, Uzbeks and Tajiks donated to the USSR up to 150 kg of precious items. And in Central Asia, with the help of specialists from Afghanistan, high-yielding varieties of Afghan cotton, tea, olive and citrus trees were introduced. And another thing: in 1942-1943, when the threat of a German-Turkish invasion of Iran and Iraq arose, part of the goods under the Lend-Lease was sent to the USSR through Afghanistan.

The Himalayan kingdoms rendered assistance to the Soviet Union in those years: Nepal, Bhutan and Sikkim. Their assistance in 1942-1945. included 15 tons of citrus, 30 tons of tea leaves, about 200 tons of sugarcane, up to 100 tons of jute fiber and products from it, up to 20 thousand tons of meat and 10 thousand tons of yak and musk ox.

Blankets, blankets, cotton wool, medicinal herbs - and this came to the USSR from the Himalayan countries and Afghanistan.

Do not stand aside and the north of Europe. The authorities of Iceland since August 1941, recalls the author, opened their ports for deliveries to the northern Soviet ports from the United States, Britain and Canada.

About 300 tons of fish oil, salted and fresh herring, mackerel, cod, and up to 150 tons of sheep wool sent Iceland to the USSR as humanitarian aid in 1941-1946. About a third of these supplies managed to be delivered to besieged Leningrad.

Sweden did not help the USSR disinterestedly, but it traded on special conditions. This trade was not approved by the Ministry of Foreign Affairs, the naval and air command of Germany. In 1942, the Swedish side on 15-25% lowered prices for its exports and increased the rates for counter deliveries from the USSR by the same amount. This pricing policy was maintained until 1946.

Four-fifths of Swedish exports consisted of equipment, cellulose, synthetic rubber and agricultural machinery, while Soviet exports to Sweden consisted of timber, flax, hemp fiber and certain types of fabrics. Also in 1942-1946. About 16 of thousands of cattle, pigs, sheep and poultry were supplied to the Soviet Union from Sweden.

Other countries receiving goods under Lend-Lease often refused them in favor of the USSR.

For example, in 1943, three batches of electric power equipment from the United States, by decision of the Chinese leadership, were redirected by the Americans to the Soviet Union due to "the tremendous needs of the defense and the rear of the USSR in equipment," according to Chiang Kai-shek.

In the matter of assistance, Mongolia cannot be circumvented. In October 1941, by the inhabitants of Mongolia was sent in the USSR, a train with gifts from 15 thousands of sets of winter uniforms, about 3 thousands of packages worth more than 1,8 million tugriks. The state bank of the USSR transferred 587 thousand tugriks. By April 1943, 8 echelons with food and clothing worth more than 25,3 million tugriks were sent from Mongolia. At the beginning of 1945, a train of presents was sent, consisting of 127 cars.

For the purchase of tanks for the Revolutionary Mongolia convoy in 1942, the people of Mongolia transferred to Vneshtorgbank 2,5 million tugriks, 100 thousand US dollars and 300 kg of gold. By the end of the year, the 53 tank was delivered to the Naro-Fominsk region.

And in 1943, a fundraiser was organized for the acquisition of the Mongolian Arat aircraft squadron. In July 1943, 2 million Tugriks were transferred to the USSR People's Commissariat of Finance. September 25, 1943 at the field airport of the Vyazovaya station in the Smolensk region, the squadron was transferred to the 2nd Guards Regiment of the 322nd Fighter aviation division.

Also during the war more than 500 thousands of horses were delivered from Mongolia to the USSR.

Observed Oleg Chuvakin
- especially for topwar.ru
Ctrl Enter
Noticed oshЫbku Highlight text and press. Ctrl + Enter
We are
Diplomats of the People's Commissariat of Defense: on the eve and during the warLend-Lease. Myths and Reality
Military Reviewin Yandex News
Military Reviewin Google News
159 comments
Information
Dear reader, to leave comments on the publication, you must to register.