The exhibition of defense industry "IDEEF-2013" opened in Istanbul 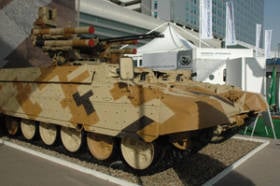 More than 50 countries presented their weapons and other products of the defense complex at the IDEL-2013 international exhibition in Istanbul. From the Russian side, Rosoboronexport and Rostec State Corporation are participating in the exhibition.


IDEEF-2013 is held in Turkey for the 11 time. As the Minister of National Defense of Turkey Ismet Yilmaz said at the opening ceremony, this exhibition of the defense industry is among the five most important global sites of such a profile and is the largest in the region. "The products of Turkish companies are of increasing interest. Here are the main battle tank, satellite systems, home-made unmanned vehicles," he said. The Minister noted that it is important for Turkey to further develop and obtain new technologies in order to further develop and improve competitiveness at international sites. According to him, the exhibition presents opportunities for this.

The organizers expect that IDEEF-2013 will visit over 50 thousand people, including more than 500 official delegations and representatives of the military departments of foreign countries.

The Russian side brought to the exhibition more than 200 promising samples of Russian military products. The Rosoboronexport booth presents materials on the Ka-52 reconnaissance and attack helicopter, the Mi-171Sh military transport helicopter and other helicopters. The exhibition features the Murena-E airborne landing boat and the Terminator fire support vehicle (in the photo). In addition, the Turkish side is offered anti-missile system "Antey-2500". Moreover, Rosoboronexport offers to cooperate in the creation of this complex, ITAR-TASS reports.

Members of the Russian delegation reported that during the three days of the exhibition, negotiations with Turkish partners on arms procurement and their joint production are planned.

Ctrl Enter
Noticed a mistake Highlight text and press. Ctrl + Enter
We are
In the Chelyabinsk regional museum opened a unique exhibition "The Russian nuclear shield"The Russophobic exhibition “Kill the Colorado!” Is taking place in Kiev
40 comments
Information
Dear reader, to leave comments on the publication, you must to register.