8 May 2013
98
Heavy Nuclear Missile Cruiser (TARKR) Project 1144.3 Peter the Great is a technically and militarily highly sophisticated system equipped with the most advanced weapons, navigation, target designation, reconnaissance and control. Many experts consider this ship even more complex than nuclear submarine missile carriers. Over its creation in our country worked for a long 12 years. Mortgaged for Pacific fleet under the name "Yuri Andropov" in 1998 he became part of the Northern Fleet of Russia under the name "Peter the Great". On April 9, 1998, an act of acceptance of the atomic cruiser in the Russian fleet was signed. On April 18, the Andreevsky flag was hoisted on board the Peter the Great.


The ship belongs to the 3-generation nuclear missile cruisers, is the world's largest non-combatant warship. TARKR “Peter the Great” is intended for the destruction of large surface targets (single and group), protection of fleet compounds from attacks by submarines and air attacks in remote areas of the world’s ocean. In total, the 1144 ship was built on the 4 Orlan project, in addition to the Peter the Great are cruisers: Kirov (Admiral Ushakov), Frunze (Admiral Lazarev) and Kalinin (Admiral Nakhimov). Currently, only one ship of this type is in service - Peter the Great, while all 3 TARKR Ave 1144 will be returned to the fleet after repairs and upgrades.

The Peter the Great heavy nuclear missile cruiser has a standard displacement of 23 750 tons, the full displacement of the cruiser is 26 390 tons. The ship has the following dimensions: the greatest length - 251,2 meters, on the waterline - 230 meters, width - 28,5 meters, draft - 10,3 meters. The height of the ship 59 meters from the level of the main plane. 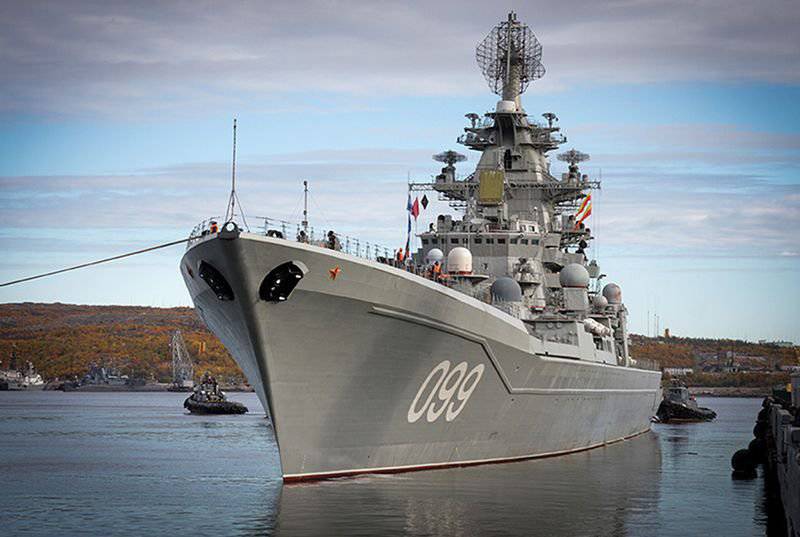 The main powerplant of the atomic cruiser with 2 nuclear fast-neutron reactors. The total capacity of the plant is 600 MW, there is also a 2 main turbo-gear unit (GTZA) with a capacity of 70 000 hp. each. In the backup version, they can receive steam from 2-x steam boilers running on organic fuel. The combination of a nuclear power plant with oil superheaters increases the overall power of the power plant and the speed of the cruiser. For comparison, "Peter the Great" is able to provide heat and electricity to a city the size of 150-200 thousands of residents. The two propeller shafts transmit the rotation to the 2 five-blade screws. The maximum speed of the “Peter the Great” is 32 knot (almost 60 km / h). Two reserve steam boilers are able to provide the ship with a speed of 17 knots and a range of at least 1000 nautical miles.

The crew of the nuclear-powered missile cruiser consists of 610 people (112 officers), which are located in 1600 different rooms, including 140 single and double cabins for officers and midshipmen, as well as 30 headquarters for sailors and foremen (for 8-30 each). In addition, the crew of the ship has 15 showers, a sauna with a pool, two baths, a two-level medical unit, with isolation rooms, x-ray and dental offices, an operating room, a pharmacy, an outpatient clinic, a gym equipped with various simulators, 3 cabins for officers, midshipmen and admirals, lounge for the rest with a grand piano and billiards, as well as its own ship TV studio. The length of the 49 warship corridor is more than 20 km., While the ship has 6 decks and 8 tiers. The height of its add-ons is equal to the height of a 7-storey residential building.

Protection TARKR provides for the implementation of measures to reduce its radar visibility. In addition, the measures of structural local protection strengthened the protection of cellars for the storage of projectiles, anti-aircraft and anti-ship missiles. The ship’s autonomy for food and food stocks is 60 days, for fuel - 3 of the year (unlimited at a nuclear reactor). 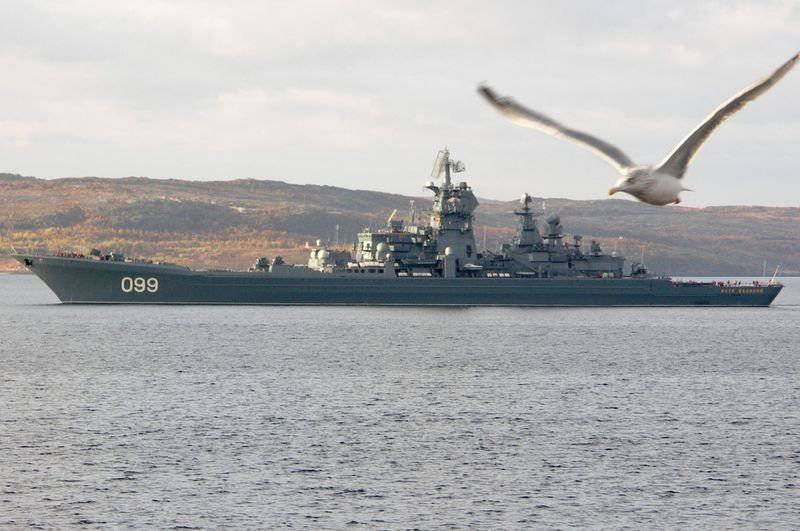 The main armament of the missile cruiser is the Granit anti-ship missile system (created by NPO Mashinostroeniya). The cruiser has 20 CM-233 launchers with advanced high-precision P-700 “Granit” anti-ship cruise missiles. The PUs are mounted under the upper deck of the ship, with an elevation angle of 60 degrees. The maximum missile launch range is 550 km, the missile’s flight is exclusively on a low-altitude trajectory - 200-250 km. Missile Speed ​​- Mach 1,6-2,5. The length of the P-700 rocket is 10 meters, the diameter of the 0,85 meter, the starting weight is 7 tons. The missile can be equipped with a conventional warhead (750 kg. BB), a nuclear one-piece (500 CT) or a fuel-air warhead to create a volumetric explosion.

Rockets "Granit" have a multi-variant program for attacking targets, as well as increased noise immunity and are designed to attack maritime group targets. During salvo firing, one of the rockets flies at high altitude in order to increase the detection range of the enemy, sharing the information obtained with the other rockets that can literally trail off the water surface. In case the leader rocket is hit by the enemy, one of the auxiliary missiles can automatically take its place. Over-the-horizon targeting and targeting can be carried out using Tu-95РЦ airplanes or Ka-31 helicopters, as well as specialized space reconnaissance and targeting systems. 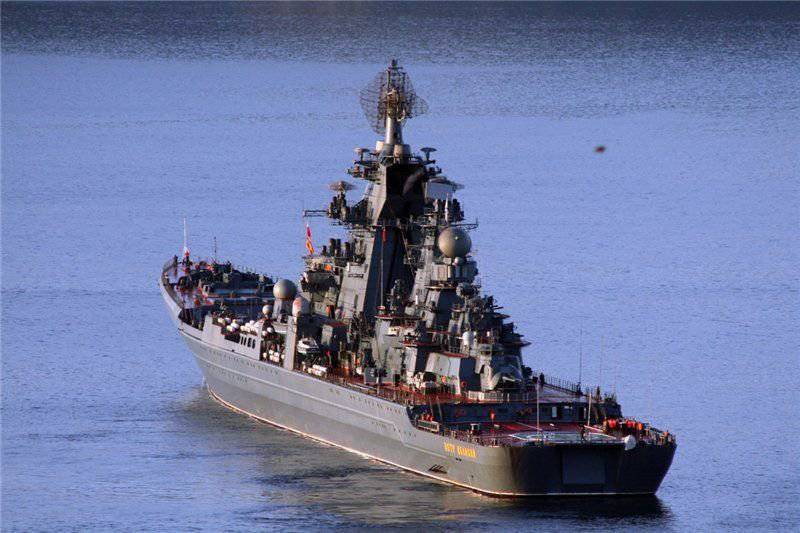 In addition, "Peter the Great" is armed with 130-mm multipurpose AK-130 paired artillery units (barrel length 70 caliber, ammunition - 840 shells), the maximum firing range to 25 km. The rate of fire is from 20 to 80 shots per minute. AK-130 uses 27-kg projectiles, which can be equipped with different types of fuses: impact, remote and radio-fuses. Ready to fire ammunition is 180 shells. The artillery unit is controlled by the MP-184 fire control system, which allows you to simultaneously accompany and fire 2 targets. 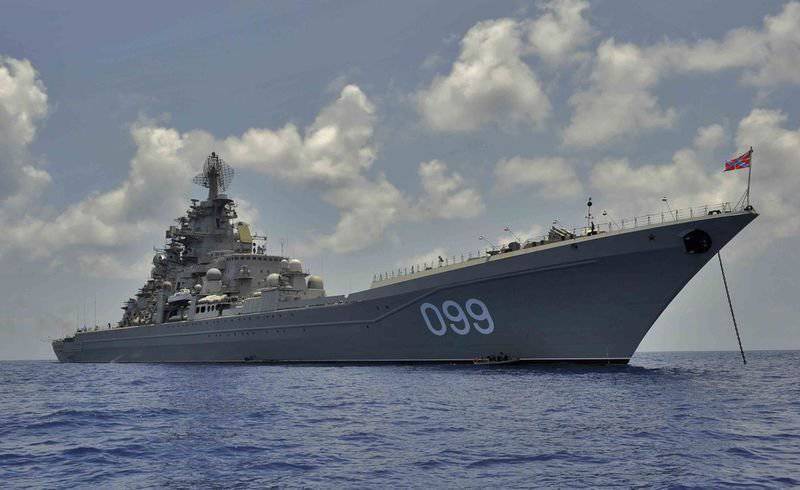 In addition, the Peter the Great TARKR is equipped with jet bombs, which are arranged as follows: one ten-pipe RBU-12000 (80 projectile weight kg, firing range 12 000 meters) is located in the bow of the vessel and mounted on a turntable, another 2-e six-pipe The Smerch-1000 RBU-3 units (55 projectile mass, kg, firing range - 1000 meters) are installed in the aft section on the upper deck on each side.

The general ship counteraction system includes 2-e paired 150-mm PU PC-14 (burst interference complex), spurious targets, counter-electronic traps, as well as a false towed torpedo target, equipped with a powerful noise generator. Also on board the cruiser is the 2 anti-submarine Ka-27 helicopter. The electronic filling of a heavy missile cruiser includes 16 stations of 3 types. General ship tracking, targeting and tracking means consist of 2-x space communication stations (SATSOM), 4-x space navigation stations (SATPAU), as well as 4-x special electronic stations. The air and surface situation is constantly monitored by the 2-e all-weather three-coordinate Fregat-MAE radar (produced by the Salyut plant). These stations are able to detect the target at a distance of 300 km and at altitudes of 30 km.

Also "Peter the Great" is equipped with 4-me radio-electronic fire control systems weapons, 3 navigation stations, the identification of "friend or foe", helicopter flight controls. The cruiser's hydroacoustic system includes a sonar with a hull antenna, which is installed in the bulb fairing, for searching and detecting enemy submarines at low and medium frequencies, as well as an automated towed sonar system having an antenna of variable depth (150-200 meters) and operating at mid frequencies.