15 May 2013
18
In the fifties of the last century, mankind began to actively develop a new source of energy - the fission of atomic nuclei. Nuclear energy was then seen, if not a panacea, then at least a solution to a great many different problems. In an atmosphere of universal approval and interest, nuclear power plants were built and reactors for submarines and ships were designed. Some dreamers even suggested making the nuclear reactor so compact and low-power that it could be used as a domestic source of energy or as a power plant for cars, etc. The military also became interested in such things. The United States seriously considered options for creating a full-fledged tank with a nuclear power plant. Unfortunately or fortunately, they all remained at the level of technical proposals and drawings.


History Atomic tanks began in the 1954 year and its emergence is associated with the Question Mark scientific conferences, which discussed promising areas of science and technology. At the third such conference, held in Detroit 1954 in June, American scientists discussed the design of a tank with an atomic reactor. According to the technical proposal, the TV1 combat vehicle (Track Vehicle 1 - “Tracked vehicle-1”) was supposed to have a combat weight of about 70 tons and carry an 105-mm rifled gun. Of particular interest was the layout of the armored hull of the proposed tank. So, behind an armor with a thickness up to 350 millimeters a small-sized atomic reactor was to be located. For him, provided the volume in front of the armored hull. Behind the reactor and its protection, the workplace of the driver was located, the fighting compartment, the laying of ammunition, etc., as well as several power plant units were placed in the middle and rear parts of the hull.

More than interesting principle of operation of the power units of the tank. The fact is that the reactor for TV1 was planned to do according to the scheme with an open gas circuit of the coolant. This means that the cooling of the reactor was to be carried out by atmospheric air that was run next to it. Next, the heated air was supposed to bring on the power gas turbine, which was supposed to set in motion the transmission and drive wheels. According to the calculations made right at the conference, with the given dimensions, it would be possible to ensure the operation of the reactor with a duration of up to 500 hours at one refueling with nuclear fuel. However, the TV1 project was not recommended for further development. In 500 operating hours, an open-loop reactor could infect a few tens or even hundreds of thousands of cubic meters of air. In addition, in the internal volumes of the tank could not manage to enter sufficient protection of the reactor. In general, the TV1 combat vehicle was much more dangerous for its troops than for the enemy.

By the next Question Mark IV conference, held in 1955, the TV1 project was finalized in accordance with current capabilities and new technologies. The new atomic tank was named R32. It differed significantly from TV1, primarily in its size. The development of nuclear technology has reduced the size of the machine and appropriately change its design. The 50-ton tank was also proposed to be equipped with a reactor in the front, but the armored hull with a front sheet 120 mm thick and the tower with the 90-mm gun in the project had completely different lines and layout. In addition, it was proposed to abandon the use of a gas turbine driven by superheated atmospheric air and to apply new protection systems for a smaller reactor. Calculations have shown that an attainable cruising range at one refueling with nuclear fuel will be approximately four thousand kilometers. Thus, at the cost of reducing the operating time, it was planned to reduce the danger of the reactor for the crew. 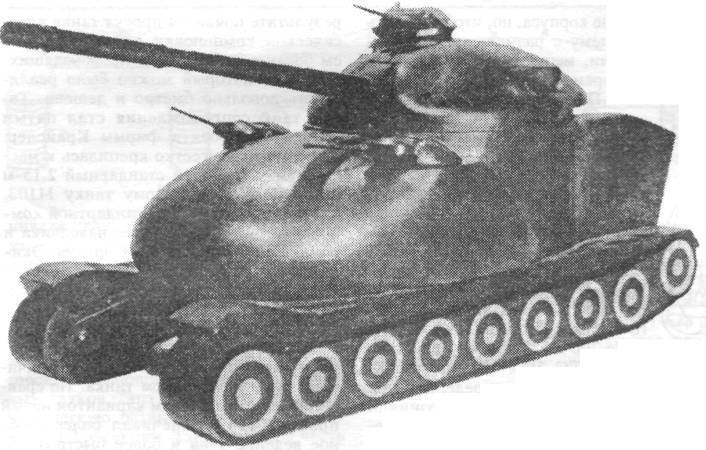 Nevertheless, the measures taken to protect the crew, technical staff and the forces interacting with the tank were insufficient. According to the theoretical calculations of American scientists, the R32 “fonil” is smaller than its predecessor TV1, but even with the remaining level of radiation, the tank was not suitable for practical use. It would be necessary to regularly change crews and create special infrastructure for the separate maintenance of nuclear tanks.

After R32 could not meet the expectations of a potential customer in the face of the American army, the interest of the military in tanks with a nuclear power plant began to fade. It has to be admitted that for some time attempts were made to create a new project and even bring it to the testing stage. For example, in 1959, an experimental machine was designed based on the heavy tank M103. It was supposed to be used in future tests of a tank chassis with an atomic reactor. Work on this project began very late, when the customer stopped seeing promising equipment for the army in nuclear tanks. The work on converting M103 into a test stand resulted in the creation of a draft design and preparation for the assembly of the layout.

The last American project of a tank with a nuclear power plant, which was able to advance beyond the technical proposal stage, was carried out by Chrysler during its participation in the ASTRON program. The Pentagon ordered a tank designed for the army of the next decades and the Chrysler specialists apparently decided to give another attempt to the tank reactor. In addition, the new TV8 tank should have personified a new layout concept. An armored chassis with electric motors and, in some versions of the project, an engine or nuclear reactor was a typical tank hull with a tracked undercarriage. However, it was proposed to install a tower of the original design.

The large aggregate of complex streamlined faceted shape was supposed to be made slightly longer than the chassis. Inside such an original tower, it was proposed to place the jobs of all four crew members, all weapons, incl. 90-mm gun on a rigid recoilless suspension system, as well as ammunition. In addition, in later versions of the project it was intended to place a diesel engine or a small-sized nuclear reactor in the rear of the tower. In this case, the reactor or the engine would give energy for the operation of the generator feeding the traveling electric motors and other systems. According to some sources, until the very close of the TV8 project, there were disputes about the most convenient placement of the reactor: in the chassis or in the tower. Both options had their pros and cons, but the installation of all units of the power plant in the chassis was more profitable, although more difficult technically. 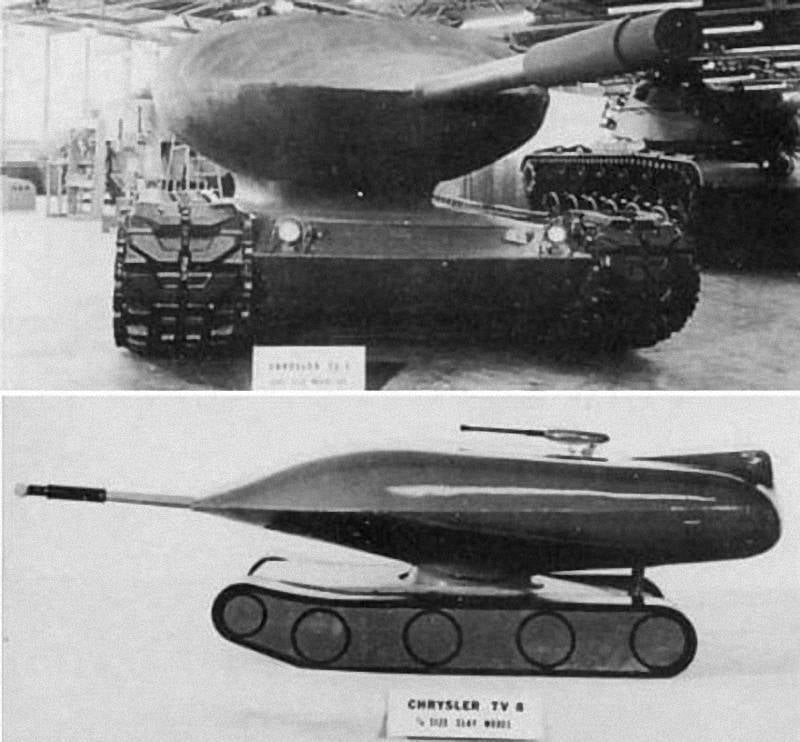 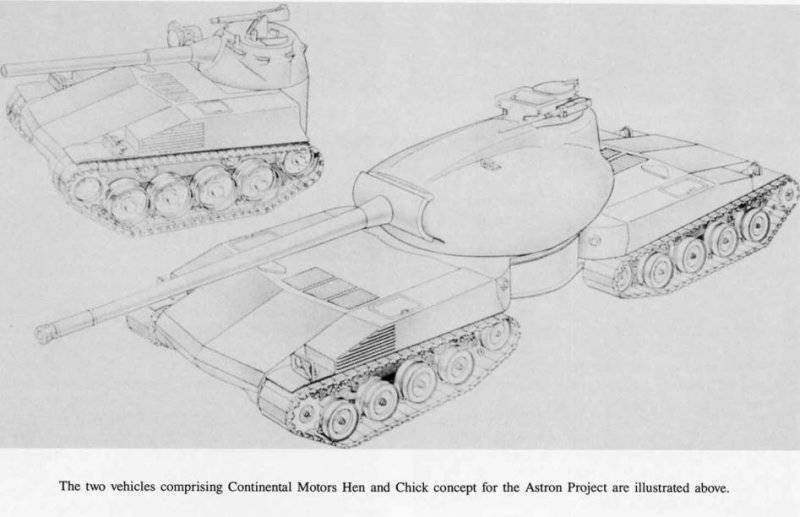 One of the variants of atomic monsters developed at one time in the US under the Astron program.

TV8 was the luckiest of all American nuclear tanks. In the second half of the fifties, a model of a promising armored vehicle was even built at one of the Chrysler factories. But the matter did not go further than the layout. The revolutionary layout of the tank in combination with its technical complexity did not give any advantages over the existing and developed armored vehicles. The correlation of novelty, technical risks and practical benefits was considered insufficient, especially in the case of the use of a nuclear power plant. As a result, the TV8 project was closed beyond hopelessness.

After TV8, not a single American atomic tank project came out of the technical proposal stage. As for other countries, they also considered the theoretical possibility of replacing a diesel with an atomic reactor. But outside the United States, these ideas remained only in the form of ideas and simple sentences. The main reasons for the rejection of such ideas were two features of nuclear power plants. Firstly, a reactor suitable for installation on a tank, by definition, cannot have sufficient protection. As a result, the crew and surrounding people or objects will be exposed to radiation. Secondly, the nuclear tank in the event of damage to the power plant - and the likelihood of such a development of events is very high ¬– it becomes a real dirty bomb. The chances of the crew to survive at the time of the accident are too small, and the survivors will become victims of acute radiation sickness.

A relatively large power reserve at one fuel station and the general, as it seemed in the fifties, prospect of nuclear reactors in all areas could not overcome the dangerous consequences of their use. As a result, the nuclear-powered tanks remained the original technical idea, which arose on the wave of general “nuclear euphoria”, but did not give any practical results.

Ctrl Enter
Noticed a mistake Highlight text and press. Ctrl + Enter
We are
Wunderwaffe for Pantservaffe. Description of the design of the tank "Mouse"VAB Mark II armored personnel carrier
18 comments
Information
Dear reader, to leave comments on the publication, you must to register.