Two "achievements" of the MMRCA tender

8 May 2013
8
How long does it take to hold an international tender for the supply of military equipment? Most of these events last no more than three or four years, although there are exceptions. Perhaps the most notable, strange and interesting exception to this rule is the Indian competition MMRCA. It is already the seventh year since its official start. If we add the preparatory stage, as well as earlier events directly related to the purchase of new equipment, then the “age” of the tender may exceed ten years. At the same time, even more than six years after its inception, the MMRCA tender did not lead to the expected result. The Indian Air Force has not yet received the desired fighters, and the timing of the start of deliveries is constantly shifting. 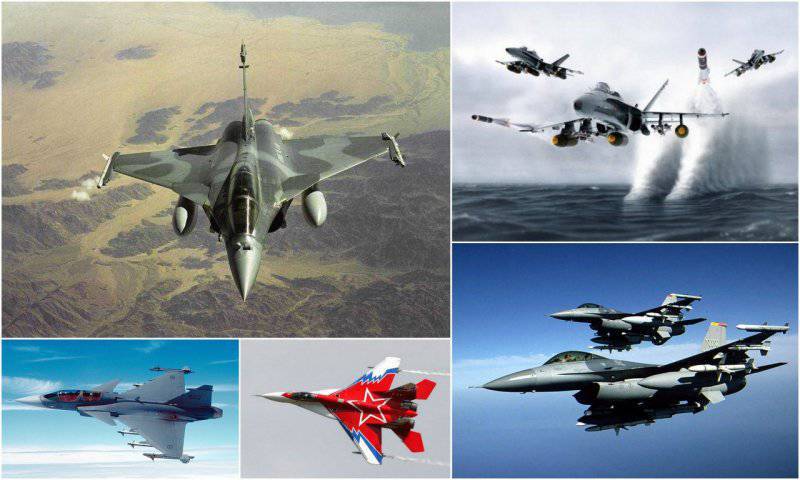 History MMRCA's tender goes back to the events of the beginning of the two thousandth, when the Indian Air Force decided to purchase a number of French-made Dassault Mirage 2000 fighter-bombers. These aircraft were already in service and have earned a good reputation. In addition, the results of the Kargil war, in which French aircraft demonstrated their combat capabilities, had an effect. According to the estimates of the Indian Air Force Command, in order to maintain the combat capability of the armed forces and expand its capabilities, the order of the new fighters was 120-130. Seeing the experience of using the Mirage, the commanders of the Indian Air Force came to a decision on the possibility of purchasing such aircraft without competition.

However, at that time it did not even reach the negotiations on the cost and other nuances of the contract. The French side warned India of the imminent production of Mirage 2000 fighters in favor of building a new Rafale. At the same time, the firm Dassault expressed its readiness to resume the assembly of the aircraft in case of signing a firm contract. India did not agree to such conditions, since certain forces in the leadership of its Ministry of Defense began to insist on choosing a new aircraft. This view was motivated by the fact that the fighter being purchased must comply not only with the requirements of the current time, but also be able to perform combat missions in the foreseeable future.

It took the next few years to determine the look of the required aircraft, as well as to get acquainted with the advertising products of aircraft manufacturers. Only in 2005, the Indian Air Force sent out official requests for information. After receiving answers from potential bidders, the Indian Ministry of Defense again began to analyze the data. All preliminary work resulted in requests for a commercial offer dated in the summer of 2007. It is the sending of requests that is considered the official start of the tender. The competition was named MMRCA (Medium Multi-Role Combat Aircraft - “Medium Multi-Purpose Combat Aircraft”). It is noteworthy that in the same year the production of Mirage 2000 aircraft was completed, which were planned to be bought at the very beginning of all the events.

At the stage of the official launch of the tender, India announced not only the requirements for the right fighter, but also the estimated volume of purchases. According to the results of the competition, the winning company was to receive a contract for the supply of 126 aircraft with a total value of about 6-7 billions of dollars. Thus, MMRCA has become the most expensive tender in the history of Indian purchases. Naturally, the promised amount attracted the attention of a large number of potential participants. As a result, six aircraft were immediately included in the competition: Boeing F / A-18E / F Super Hornet, Dassault Rafale, Eurofighter Typhoon, Lockheed Martin F-16IN Super Viper, Saab JAS 39 Gripen and MiG-35.

After four years of comparisons, assessments and analyzes, the Indian Air Force Competition Commission announced the list of tender finalists. The preliminary results of the competition were unexpected. The Russian MiG-35 fighter, as well as the main contenders for the victory, was thought to have dropped out of the race for the contract. No American aircraft managed to get into the “short list” of the tender. Further choices were made between the European Dassault Rafale and Eurofighter Typhoon. This competition was particularly interesting in the light of the fact that Rafale was created as a French alternative to Typhoon.

While the commission chose the best aircraft for the air force, there were regular reports of an increase in the value of the future contract. However, after the contest finalists were announced, a number of Indian and foreign experts unanimously spoke about the specific financial side of the future agreement. In fact, the competition committee chose the two most expensive aircraft, and therefore plans to buy 126 fighters looked dubious, even if the budget was increased to the planned at that time 10-11 billions of dollars. Nevertheless, despite the controversial situation, the competition commission continued its work.

Last January, 2012, the final winner of the MMRCA tender, was announced by the French fighter Dassault Rafale. Among other things, this decision of the commission is interesting because previously Rafale has never won tenders for supply to third countries. Dassault offered this aircraft to Brazil, Morocco, South Korea, etc., but in all cases it was bypassed by American technology. Especially strange are the failures of Rafale in Brazil, the United Arab Emirates and Morocco. France has leverage on these countries and, if desired, could in any way force them to buy their own fighters. But the Moroccan military eventually chose the American aircraft, the Emirates are leaning towards the same decision, and Brazil has virtually completely suspended the current tender.

Thus, the Indian contract MMRCA for the company Dassault is not just an order for the supply of equipment, but a real means of advertising. Starting to serve in India, "Rafali" will be able to interest other developing countries. However, before the service is still far away. More than a year has passed since the announcement of the winner in the MMRCA competition, but the contract has not yet been signed and negotiations continue. The main reason for this is the financial part of the contract. India requires Dassault to build 18 aircraft and transfer the documentation necessary for the construction of the remaining 108 fighters at the facilities of the Indian company HAL. In addition, in order to meet the BND 10,5 allocated by India, French aircraft manufacturers must deliver the aircraft in the simplest configuration. If the new fighters are built in full configuration, their total cost will increase by one and a half times, which the Indian ministries of defense and finance will definitely not like. 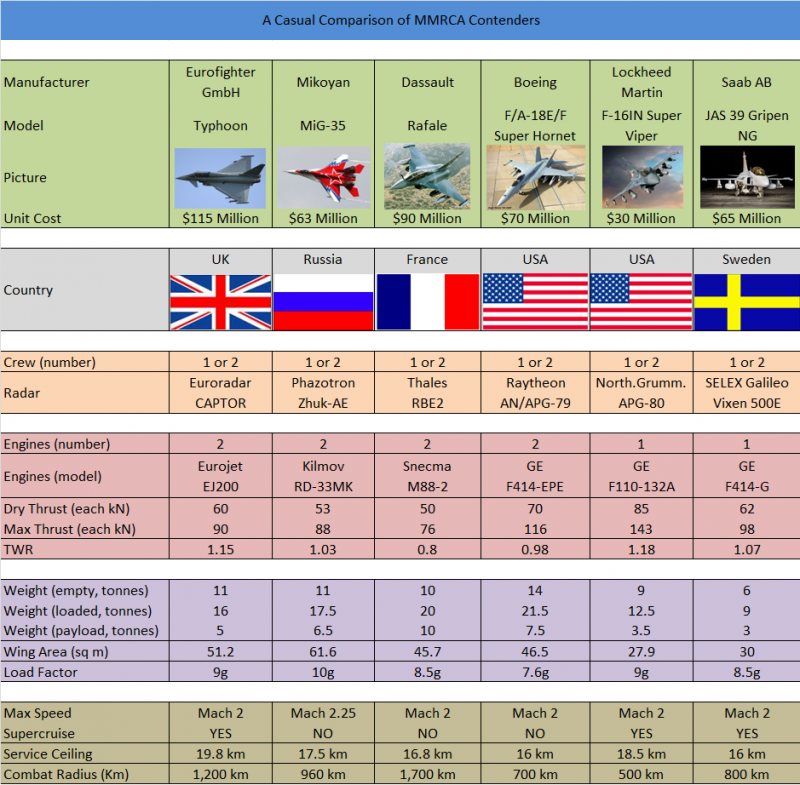 Interestingly, after the announcement of the winner of the competition and the start of negotiations, new messages began to arrive extremely rarely. Moreover, the vast majority of these News It is not always trustworthy, because it is published with reference to some anonymous sources, allegedly related to the negotiation process. Nevertheless, the lack of official communications, as well as a sufficiently long period during which the contract was never signed, transparently hint at some difficulties that arose during the discussion of the conditions. About a month ago, at the beginning of April-a month, unconfirmed information appeared in the Indian media about a temporary suspension of negotiations. Thus, according to the Indian Express, the parties cannot agree on the conditions for the transfer of technology and the organization of production of Rafaley in India.

It is argued that Dassault does not wish to take responsibility for the aircraft assembled at HAL enterprises, and demands that two contracts be concluded at once. One of them will deal with the construction of 18 aircraft in France, the second - the transfer of technology and assembly kits for the assembly of 108 fighters in India. The Indian side, in turn, does not intend to divide the agreement into two and requires the French to fully undertake obligations for all 126 aircraft purchased. Official confirmation or denial of this information has not yet been. However, even without such information, it is clear that negotiations are very difficult or even deadlocked due to some unknown differences.

In general, a very difficult and ambiguous situation has developed around the purchase of a new aircraft. Negotiations, at least, were delayed, which is why so far there are no positive developments. In addition, there are some problems of an internal political nature, which can have a great influence on the course of negotiations. A year later, in May 2014, parliamentary elections will be held in India and politicians are already preparing for them. For campaigning for themselves and against competitors, they are very actively using the topic of corruption in arms procurement. In this case, the signing of a contract before the election could be an additional reason for unfriendly attacks on the ruling party of the Indian National Congress. If the signing of the agreement will be postponed until the elections, the last stage of the MMRCA tender will be delayed for another year or even more. In addition, if other parties win the elections, a revision of the tender is possible with a revision of its results, which also does not speed up the delivery of new aircraft.

It is difficult to say when and how the long-suffering MMRCA will end. Moreover, it can be assumed that it will not end at all, since it will be canceled. Under the best of circumstances, the last Rafale will enter the Indian Air Force only in 2018-2020. By this time, all the fifth-generation fighters that have now entered the international market should be able to hit the prospects of the Indian Rafalee strongly. Thus, the protracted negotiations can lead to the most unpleasant consequences for both parties: India will not receive the necessary aircraft on time, and France will simply remain without an order, since it will be necessary to start a new tender with new conditions. As a result, the second record will finally be secured for the MMRCA tender. It has almost become the most expensive order of the Indian armed forces, and now it will also become the longest in time for the competition, negotiations, etc. But the MMRCA is no longer exactly record-breaking for its country, which, in combination with other "achievements", exposes it in a completely unattractive way.

Ctrl Enter
Noticed a mistake Highlight text and press. Ctrl + Enter
We are
Chalta hi aviation is powerlessMMRCA Indian tender: three years of fruitless negotiations
8 comments
Information
Dear reader, to leave comments on the publication, you must to register.