Iran is recruiting volunteers for the war in Syria 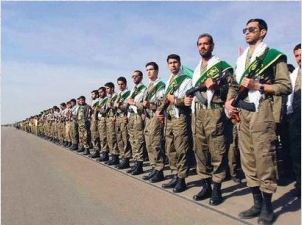 A statement by the Iranian parliamentarian Saleh Jokar, published on the website, states: “Today our main military front is going against the line of the Zionist entity. This front must be strengthened, and Zionism must be destroyed. The betrayal continues, and we cannot look at it with folded arms. We must enroll in volunteers and start helping, ”MIGnews quoted.

According to sources, earlier it was said about Iran’s readiness to assist the Syrian authorities and the military command, in particular, in training servicemen for further service in the Syrian army. This message was distributed on behalf of the representative of Iran’s top military command, General Ahmad Reza Purdastan.

The representative of Iran’s top military command, General Ahmad Reza Purdastan, said in his address: “As a Muslim nation, we support Syria, and if the need arises for training military personnel, we will provide it, but we will not actively participate in operations,”

In Tehran, on 7 in May, Iranian Foreign Ministry spokesman Ramin Mehmanparast circulated another message. His report says that the Iranian authorities are directly accusing the Western countries, in particular, the United States of complicity with terrorist groups operating in Syria and using chemical weapon.

Iranian Foreign Ministry spokesman Ramin Mehmanparast quotes Iran.ru .; - “The victims of crimes committed by armed groups in Syria are innocent people who are only defending their country and not ready to cooperate with terrorists. Women and children in Syria are killed by various types of weapons, including chemical ones, that fall into the hands of terrorists with the support of Western countries. ”

Earlier, the Syrian authorities were the first to speak on the issue of investigating the use of chemical weapons in the region. Exactly the same initiative and official statements were also made by the Russian side headed by Minister of Foreign Affairs of Russia Sergey Lavr

Just the day before, the UN official statement in the person of Carla del Ponte about the use of chemical weapons by Syrian rebels, namely the nerve-paralytic gas sarin, was circulated: - “The commission was in neighboring countries, interviewed the injured and doctors, including in field hospitals, and according to the data obtained, there are very serious, reasonable suspicions that sarin was used in Syria. It was used by rebels, not government troops, ”said Carla del Ponte in an interview with a Swiss television station.

Ctrl Enter
Noticed oshЫbku Highlight text and press. Ctrl + Enter
We are
Reports from the militia of New Russia for 27-28 September 2014 of the year
77 comments
Information
Dear reader, to leave comments on the publication, you must to register.