"In the entire post-Soviet space, they openly spit in historical memory": an interview with Konstantin Sivkov 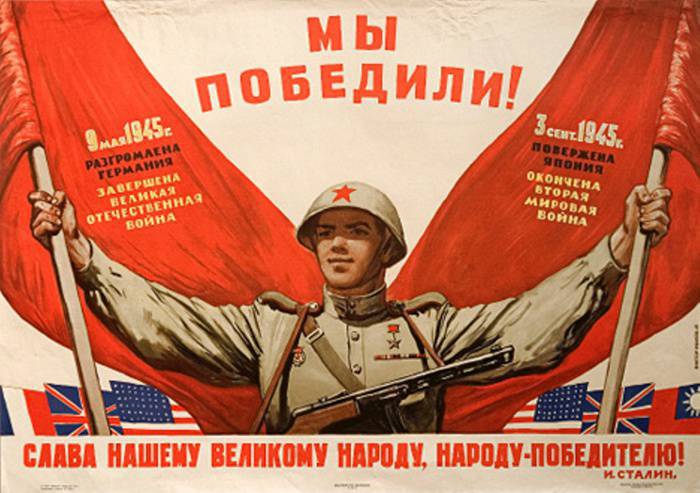 Ukraine has revealed to the world one more precedent of rewriting stories World War II. Two Soviet divisions of the Great Patriotic War, who fought on the territory of the south of present-day Ukraine, became known as "Azerbaijani", and the soldiers and officers of these divisions were sons and daughters of the Azerbaijani people. Revisionism with an Azerbaijani slant triumphed in Ukraine, when in Nikolaev not long ago a monument was opened in honor of the soldiers of the 416-th Red Banner Division. The personnel of this division, where there were people from all over the USSR, recorded the well-wishers from Kiev and Baku “Azerbaijanis”. 7 of May of this year, the Azerbaijanis were also soldiers from the 77 th Simferopol Rifle Division. Sergo Ordzhonikidze, who liberated Crimea from Nazis in 1944 year. A monument with the inscription "Fearless sons and daughters of Azerbaijan, soldiers of the 7 th Red Banner Order of Suvorov of the Sergo Ordzhonikidze Division, participants of the Sapun-Gory assault" will be unveiled near Simferopol, in the historic site of Sapun-mountain on May 77. Konstantin Sivkov, Doctor of Military Sciences, captain of the first rank, vice-president of the Academy of Geopolitical Problems of the Russian Federation, outlined his viewpoint on the modern Ukrainian-Azerbaijani revisionism of the history of the Great Patriotic War.


BakuToday: In the case of the 77-th Simferopol Division, which took Sapun Mountain in the 1944 year and allegedly consisted of Azerbaijanis, there is an important detail. In the Crimea, during the Great Patriotic War, the 77 I Infantry Division, deployed in Baku in the 1920 year, was once deployed. This Azerbaijani division took part in the Kerch-Feodosiya operation of the Soviet troops, after which it was disbanded. Tell us why the disbandment of this division, which in fact was Azerbaijani, took place, and where did the Azeris mainly serve?

The Kerch-Feodosia offensive operation (CFD), conducted by the Red Army from December 1941 to May 1942, started well for the Red Army, but ended in disaster. 130 of thousands of people died, 170 of thousands were captured by the Germans. For the Wehrmacht opened direct roads to the Caucasus and Sevastopol. Why the well-planned and so successfully begun operation of the Red Army collapsed? I will talk about what I know.

Manstein recalled: German military intelligence found on the right flank of the Soviet troops divisions from Azerbaijanis and Georgians who were supposed to fulfill the task of covering the landing of the Soviet landing. The Wehrmacht command decided to deliver a massive blow to the Transcaucasian formations of the Red Army. But this blow was not needed. One strike of the diving bomber Yu-87 and the appearance of the German on a distant horizon were enough tanksso that the Transcaucasian formations of the Red Army took flight. Due to the flight of Soviet soldiers from the Transcaucasian formations, the offensive of the Red Army near Kerch choked. The front line was broken. Soviet troops lost their rear bases, and as a result, the operation was disrupted. Soviet troops left Crimea, and subsequently this led to the fall of Sevastopol. I do not want to say that the role of the Azerbaijani people in the Great Patriotic War was extremely passive. A lot of Azerbaijanis fought in those years, among them were Heroes of the Soviet Union.

REGNUM: What do you think as a military man about the dubious monuments put up by the Ukrainian authorities in honor of the 77-th Simferopol Division in Simferopol and in honor of the 416-division in Nikolaev? And on one monument, and on the other, the personnel of both divisions are universally attributed to the Azerbaijanis. But in these divisions people fought from all over the Soviet Union.

If we ignore the fact of forgery, the fact that Ukraine has set up monuments in honor of Azerbaijanis - a soldier of the Great Patriotic War, deserves approval. In the same Ukraine today, Bandera and other gangster vermin are shamefully honoring. When in Ukraine someone honors Soviet soldiers who cleared the Ukrainian land from the Nazis and their Bandera minions, this is already good. Especially in our time, when in the entire post-Soviet space they openly spit in historical memory. When they spit in history, they renounce the future.

REGNUM: What does the outrage of the historical memory of which you speak about turn for the peoples of the former USSR?

The people of Azerbaijan, thanks to the efforts of Heydar Aliyevich and Ilham Heydarovich, turned out to be in the Middle Ages. The Ukrainian people, thanks to the efforts of their independent government, was rejected in the beginning of the XIX century. In the entire post-Soviet space, people are not that morally suppressed, they are crushed. It is difficult to say who lives in the former USSR better, and who is worse off. Only small groups of people who appropriated billions in funds at the right time have the opportunity to live in the former USSR. These nouveau riche support nationalism in their own countries in the most primitive chauvinistic variant, when one "titular" people is opposed to another, "non-titular". The game of national-chauvinistic instincts is needed by the new elites of the post-Soviet space so that their own title peoples, brought to poverty, do not touch these very nouveau riches. Who has fists and an elastic conscience, that corrupt post-Soviet elites are attracted to national formations, that is to say, to organized gangs. For the rest of the people there are hollow demagogic slogans. A set of demagogic husks for each post-Soviet state of their own. Someone's name is in Europe, someone else somewhere. And the result is the same for all: the elites are robbing their peoples. In Ukraine, this is done not only by the clan "ladies with a scythe," but also by the environment of Viktor Yanukovich. In Azerbaijan, the Aliyevs are robbing their people. Former republics of Central Asia, once flourishing and developed, now - backward feudal khanates. Georgia under Ivanishvili lives the same way as under Saakashvili, Shevardnadze and Gamsakhurdia, that is, it is heading nowhere.

Russia, unfortunately, is also no different in this respect. Every year we are increasingly losing the sense of historical memory and spiritually degrading. You need to shout it out loud. But everyone is silent.

Ctrl Enter
Noticed a mistake Highlight text and press. Ctrl + Enter
We are
New plants and workshops in Russia in 2014 yearVictory Day: Why was Baku not given the title of Hero City?
78 comments
Information
Dear reader, to leave comments on the publication, you must to register.