8 May 2013
125
Recently, relations between Russia and Belarus look more than positive. This is confirmed not only by the presence of common positions on a number of geopolitical issues, but also by economic indicators. At the end of 2012, the trade turnover between Belarus and the Russian Federation reached a record for the entire post-Soviet history level in 45 billion dollars. The level of freight and passenger traffic between the two countries has risen in the first quarter of this year alone, almost 11%.

The report, in particular, states that with a GDP of the Republic of Belarus of approximately 63,2 billion dollars, according to the results of 2012, the state saved at least 10 billion dollars on supplies of Russian energy alone. Such impressive indicators of budget savings in Belarus suggest that the preferential price made it possible for the Belarusian state to calmly survive the devaluation of the national currency against the US dollar after it was decided to let it float at the height of the crisis. Despite the fact that immediately after the relative liberalization of monetary policy in Belarus, the crisis wave hit ordinary Belarusians, reducing the level of their real incomes, it took the Belarusian economy a little more than a year to not only cope with the crisis, but also to grow.
On the 2013 year, the IMF gives a growth forecast of 2,1%. One could say that 2,1% growth is not an impressive value, but one should not forget that for the absolute majority of European economies such indicators would be more than desirable. For example, the forecast for the annual Bulgarian addition to the economy from the same IMF is only 0,9%, and the Greek economy, which for a year in a row goes to a steep financial peak (minus 4,2% according to forecasts for the current year). The growth of the Belarusian GDP is comparable to the growth of the economy of the neighboring (EU) Poland and Lithuania, and the volume of Belarusian production today in all key parameters exceeds similar volumes, for example, Lithuanian industrial production, which is preparing to please the eurozone.

However, with all the positives that have emerged from the work of the mechanisms of rapprochement between Russia and Belarus, there are in relation to the two countries and those moments that raise certain questions. One of these moments manifested itself quite recently, and it concerns the possible deployment of a Russian aviation regiment on the territory of Belarus. The information itself about the deployment of the Russian air base in the territory of the Republic of Belarus came from the Russian defense ministry. His head - Sergey Shoigu - personally announced such prospects. In particular, he said that the Russian Ministry of Defense has plans to deploy a fighter regiment in Belarus to the 2015 year. 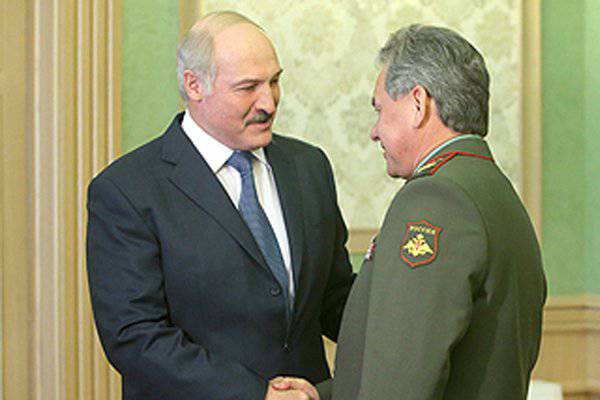 Such a statement by Sergei Shoigu was obviously unexpected for the Belarusian leadership. Everyone immediately began to guess: the Russian Minister of Defense mentioned the fighter air regiment with the aim of exerting a kind of pressure on Alexander Lukashenko so that he, as they say, did not wag the tail - in other words, he did not look for an opportunity to escape from the agreements reached earlier. Or Shoigu just blurted out too much ...

But the head of the Russian military department does not give the impression of a person who can, pardon the term, blurt out something that may be talked about in the highest echelons of the Russian authorities, and which should not have been taken out of the threshold at all. And at the same time, if we admit that this way a proposal was made against Lukashenka that he could not refuse, then this can hardly be considered an appropriate way to communicate with the Belarusian leadership. The Belarusian president, although he understands all the benefits of integration with Russia, is clearly not used to being faced with a fact.

It is for this reason that contradictions have arisen in assessing whether the air force of the Russian Air Force will be based in Belarus or not. Lukashenko hastened to declare that there is no talk about the deployment of the Russian Air Force base in the Republic of Belarus. According to him, Belarus is going to buy several modern Russian fighters. As they say, feel the difference: Russian-made fighter jets in Belarus and the Russian fighter regiment in Belarus. The difference is, indeed, more than significant. There are Russian fighters in many countries around the world, but this does not mean that, for example, Russian aviation regiments are stationed in India ... In this confusion of terms, Alexander Lukashenko believes, lies the reason for the misunderstanding between Moscow and Minsk, which, if Believe the very president of Belarus, quickly leveled.

If you believe the words of the Belarusian president, it turns out that the main Russian minister of defense, Sergei Shoigu, was entangled in terminology. And in order not to let down all dogs on Shoigu, Lukashenka said: “But in any case, possible agreements with Russia in the field of defense do not threaten the independence of the Republic of Belarus.”

Meanwhile, in a number of information sources both in Russia and in Belarus there is information that the Belarusian president is somewhat deceptive. Allegedly, in fact, Minsk and Moscow had long enough agreed that the Russian air base would be located on the territory of Belarus, but only Alexander Lukashenko did not bring this to the attention of Belarusian citizens. The reasons for this really are. One of these reasons can be called the fact that the Belarusian president simply did not want to spread today about the deepening of military cooperation with Russia, leaving for himself a chance to “not irritate” the western “partners” and his political opponents within Belarus itself. But now the old Russian proverb that the word is not a sparrow is already working. And Sergey Shoigu managed to say this word. After the release of the “not a sparrow” to the president of Belarus, there is nothing else left but to say that there is nothing reprehensible in military cooperation between the two countries.

But, in fact, should we (Russia and Belarus) have to worry about how Western “friends” will react to the possible deployment of a Russian air base (if such accommodation is really planned) on the territory of the Republic of Belarus? Even if splashes of saliva and screams from Russia again fly, they say, that Russia and Belarus are aiming at militarization of Eastern Europe, we can always use the Western technique - to declare that creating a base does not threaten European security at all, and vice versa protects Europe from the blows of, say, radical Islamists or other accomplices of world extremism. You can declare that the ammunition is aimed anywhere, but not against Europe. We give, as they say, oral guarantees. We, I remember, were given exactly those about EuroPRO ...

It is noteworthy that immediately after the appearance in the media of information about the hypothetical appearance of the Russian aviation regiment in Belarus, the Ukrainian opposition politicians showed themselves. They immediately rushed to announce that Ukraine was also awaiting the “Russian military occupation” after Yanukovych signed the document on joining the Customs Union. The Kremlin, they say, bought Minsk, and he, too, is going to buy Kiev for cheap energy.

In general, the Ukrainian opposition, starved for informational reasons in terms of “Russian imperial ambitions”, jumped at this information as a saving straw. Overnight, anti-Russian alarmism awoke among those who are trying with all their might to drag Ukraine into NATO. Will the Ukrainian president get infected with this alarmism? Does he have immunity against this annoying disease, which for years has been trying to cultivate those to whom any rapprochement between fraternal states and peoples is like a bone in the throat ...

Immunity in this situation with Viktor Yanukovych, in principle, could be shared by the Kazakh leader, who, based on his experience, clearly sees no reason to make an elephant out of a fly about rapprochement with Russia in both economic and political matters.

And by and large, whether the creation of a Russian air base in Belarus is planned or not planned - this is a question that should concern only Russia and Belarus. In the end, we should not forget that Russia and Belarus are the Union State, and therefore it is up to them to decide in which part to keep the same military aircraft. And if someone in the possible presence of such an air base saw a certain manifestation of militarism, then let him take off his rose-colored glasses and look around. Iraq, Syria, Libya, Yemen, Afghanistan, adaptive stages of deployment of a missile defense system in Europe, preparation for deployment of a missile defense system in the Asia-Pacific region - what then is this? Children's sandbox games? ..

Ctrl Enter
Noticed a mistake Highlight text and press. Ctrl + Enter
We are
Results of the week. “When a lot of people look stupid, it starts to look normal.”Customs Union. Facts and Figures
125 comments
Information
Dear reader, to leave comments on the publication, you must to register.