Iraq and Afghanistan: American money to the wind 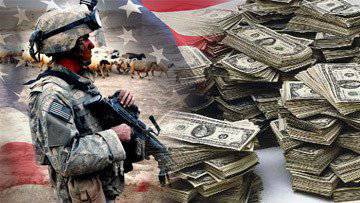 In 2011, Barack Obama said that the US spent only a trillion dollars on operations in Iraq and Afghanistan. For Obama and for senators, a trillion is there, a trillion here is pure statistics. Approximately as for one of the characters in the film "Deadly weapon"Leo Getz:" Well, this is budget money ... So, draws! "Brown University in the same year did not agree with Obama. Its experts counted the costs of wars in Iraq and Afghanistan, as well as operations in Pakistan, at almost four trillion dollars. And by 2013, this estimated amount has increased at least one and a half times.


In June 2011, the year David Byrd ("Voice of America") told the public about the results of the study at Brown University - more precisely, the Watson Institute for International Studies at the named university. The expert report sounded the amount spent on the 3,7 wars of a trillion dollars.

One of the authors of the study, Kathryn Lutz, said: “Four trillion is a reasonable estimate of the costs incurred to date, plus costs that are still coming, for example, payments to participants in hostilities. Another trillion dollars, according to our estimates, will have to be paid up to 2020 in the form of interest on debts. ” According to Lutz, the specialists also took into account the costs of treating wounded soldiers and the estimated military expenditures for Afghanistan, Pakistan and Iraq in 2012-2020. Another co-author of the report, Neta Crawford, a professor at Boston University, remarked that they also estimated the costs associated with lost opportunities: “Let's take a look at this from which side. The average annual budget of these wars over ten years amounted to 130 billion dollars. With this money, 900 thousands of jobs in education could be created. ”

But Obama and the senators, and behind their impenetrable backs, industrialists and lobbyists, exactly continuing the disastrous line of Bush Junior, prefer to fight. Yes, and why the American people education? Smart people are prone to pacifism and will oppose wars.

Viktor Vasilyev ("Voice of America") cited data from the last March report of the Watson Institute for International Studies at Brown University.

According to the Watson Institute, only the Iraq war cost the US $ X trillion in 1,7. dollars. If we add additional payments to war veterans (490 billion dollars) and interest on these payments over the next four decades, the payment for "Iraqi freedom" could rise to 6 trillion. dollars.

These calculations can be interpreted as an adjustment to the forecast made in 2008 by the Nobel Prize in Economics, World Bank chief expert Joseph Stiglitz, the author notes. In his book, The Three Trillion War, co-authored by Harvard University professor Linda Bilmes, he suggested that half of the total direct and indirect losses of all participants in the Iraq war will be the share of the United States.

According to the Financial Times, the war in Iraq brought solid profits to coalition contractors. Entrepreneurial businessmen received about $ 138 billion for various services: from protecting diplomats to providing them with toilet paper. Thousands of 14 contractors hired by the US government continue to do business in Iraq to this day.

According to a report by the Watson Institute, the United States spent 3,2 - 4 trillion in total for the war in Iraq, Afghanistan and Pakistan. dollars, writes bigmir.net. The direct costs of the US government for the war in Iraq amounted to 807 billion. More than 1 trillion. dollars allocated to provide veterans to 2050 year. (You can admire the infographic in Russian language from the link provided here. You can also admire the increase in direct costs for two wars on the American website costofwar.com).

This money could be spent on US domestic programs, including improving the health care of citizens, experts from government and international organizations complain, according to Newsru.combased on data from the British medical journal Lancet.

The magazine notes that during the Iraq war from 2003 to 2011, at least 116 of thousands of Iraqi civilians and 4800 of coalition soldiers died in the year. "Many civilians were injured or ill due to damage to the health infrastructure, and about 5 million more were forced to leave their homes," the article says.

More than 31 thousand American troops were injured. Most of them had post-traumatic stress disorder, traumatic brain damage was present, and other neuropsychological disorders were detected. All this, of course, was accompanied by psychological problems.

Currently, a third of Iraqis live in extreme poverty. Political instability in the country is shaken by outbreaks of infectious diseases and epidemics of non-communicable diseases associated with low living standards, poor nutrition, exhaustion.

All this can be called the results of military democratization.

Political columnist Vladimir Odintsov in the network magazine "New Eastern Review" summed up the final line under that price - literally, - which the American people paid for the bloody deeds of Bush Jr. and Obama.

According to the analyst, the question of both the causes of the two wars and their value (including the sources of funding) is shrouded in secrecy and lies. The “general war on terror” and the search for “weapons of mass destruction” did not succeed. At the start of the Iraq war, the Bush administration’s government claimed that its expenses would cover Iraqi oil revenues, but this did not happen.

The author cites data from a report published by the Kennedy School of Government (Harvard University). According to scientists, the price of ten years of US military aggression in Iraq and Afghanistan is likely to reach 6 trillions of dollars. This means that Washington’s many years of aggression will cost every American family 75000 dollars.

This huge amount includes the purchase of military equipment, payment of soldiers' contracts, medical care, social benefits to the military in cases of injuries, disability or fatal injuries. The cost of using a soldier alone for a year in the Afghan war costs 1 million dollars.

For ten years, 1,56 million American soldiers (56% of all veterans of Afghanistan and Iraq) have been provided with medical care. Social benefits will be paid to them for the rest of their lives. According to statistics, every second veteran of the war in Iraq and Afghanistan submitted his dossier for disability benefits - also for the rest of his life. More than 30 thousand veterans have already been recognized as disabled by 100% and 145 thousand - disabled with disability from 70 to 90%, notes Vladimir Odintsov.

It turns out that Washington quietly borrowed 2 trillion dollars, mainly from foreign lenders, to finance the wars in Iraq and Afghanistan. But this is about 20% of the amount of US government debt between 2001 and 2012, the expert writes. To date, the government has paid 260 billions in interest on a military loan. In the future, payments will amount to thousands of billions of dollars.

This money is thrown to the wind. These debts are completely useless for the people of the United States, who financed and continued to finance government wars.

“From these wars, only the Washington hawks once again became rich, who are now desperately seeking the possibility of unleashing a new military aggression to cover their losses from the financial and economic international crisis with profit.”

What is this aggression? Oh, there can be no two opinions; the schoolboy will guess also if he, of course, is not American. Israeli actions against Syria, a chemical series launched by producer Obama and directors Kerry and Hagel, money from Qatar and Saudi Arabia, flowing to Syrian “opposition”, Erdogan’s hot Turkish speech, calling Bashar al-Assad a “butcher” and “killer”, finally, spring the pursuit of Cameron and Hollande, who desired to democratize Syria, and for that, at the expense of the British and French people, therefore, arm that gang of Shariah-terrorists, which would fight for human rights and all kinds of freedoms there, give us geopolitical vector, which the White House draws in collaboration with NATO.

Observed and commented on Oleg Chuvakin
- especially for topwar.ru
Ctrl Enter
Noticed oshЫbku Highlight text and press. Ctrl + Enter
We are
The tragedy of the American army ("The Atlantic", USA)Situational analysis of the death of the MH17 flight (Malaysian Boeing 777), made on the basis of engineering analysis from 15.08.2014
Military Reviewin Yandex News
Military Reviewin Google News
17 comments
Information
Dear reader, to leave comments on the publication, you must to register.