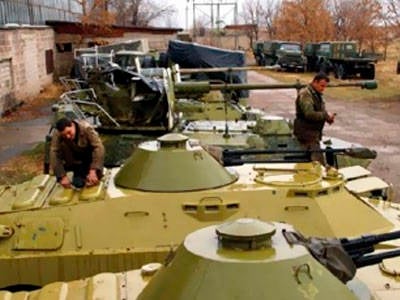 The process of deep modernization of armored vehicles and air defense systems has been launched in Armenia. This REGNUM news agency has learned from sources in the Ministry of Defense of the country.


In particular, the source said that a major overhaul and modernization was launched at a joint venture with Poland tanks T-72, to the level of RT-72U. The tank will receive a new power plant with a capacity of 1000 hp, improved dynamic protection, trellised screens covering the aft of the hull and turret of the tank. An autonomous turret will be installed, with remote control, equipped with a 12,7 mm machine gun. The machine will also receive a circular surveillance system with 8 cameras, a panoramic thermal imaging sight and a new communication system. The crew’s comfort will also be enhanced - an air conditioning system is installed in the tank. All these changes make it possible to bring the standard T-72 to the level of the latest Russian and Ukrainian tanks T-90 and BM Oplot.

Infantry fighting vehicles BMP-1 and BMP-2 will also be overhauled, at a joint venture with the Russian Federation, and in the process will be seriously upgraded, with a real improvement in tactical and technical characteristics - new anti-tank missiles and 30 mm guns will be installed.

Particular attention is paid to the modernization of air defense systems, the source said. In addition to the already well-known modernization of the OCA-AKM systems, the sensitivity of the C-300PT-1 and C-300PS systems, with an increase in sensitivity, especially at night, has been launched, together with the Russian Federation, to the level of C-300ПМ. The complex will be equipped with new 48H6E missiles, instead of the old 5В55Р, which will increase the firing range from 75 km to 150 km. The new radar provides a target detection range of up to 300 km, and the possibility of firing 6 targets at the same time, guiding each 2-x missiles at a time.