In the USA, a pistol made with an 3D printer was tested 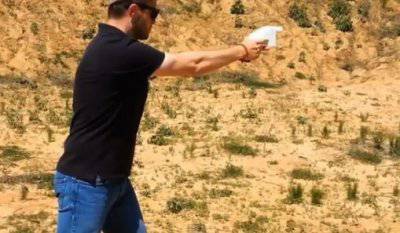 A group of Defense Distributed activists announced the creation of the first working pistol using an 3D printer.


May 4 sample of the first gun, printed on the 3D-printer, was tested at the shooting range in Texas. Gunshot weapon was made of plastic on the device Dimension SST worth $ 8000. In a video demonstration, a printed gun made a single shot. Apparently, after that the weapon broke.

The weapon was developed by Defense Distributed, its founder, 25-year-old Cody Wilson (Cody Wilson), has already announced that in the coming days will publish on the Internet working drawings of the pistol, through which anyone can print it.

The pistol, called The Liberator (“Liberator”), consists of 16 parts. It is noted that the only metal element of the gun, which will have to get separately - is a metal firing pin of the trigger mechanism. As the Forbes magazine emphasizes, the creators of the pistol did this so that the weapon could not be imperceptibly carried through a metal scanner at the airport. However, theoretically, this part can be made removable or replaced with a plastic analog. And since the disassembled plastic parts of The Liberator are very difficult to identify, attackers can use these weapons.

The creators of The Liberator showed only the appearance of the gun and a single shot. On the characteristics of the weapon is not reported.

Criticism of the project Defense Distributed made groups calling for the restriction of sales of firearms. Previously, Defense Distributed had already presented a receiver-box of an automatic rifle AR-3 printed on an 15D printer, which was able to withstand several hundred shots. Member of the US Congress Democrat Steve Israel (Steve Israel) issued a statement in which he called for the introduction of corrections in the law as soon as possible, which would prohibit plastic self-made firearms. However, how exactly this ban can be achieved, the congressman did not specify.

It is noted that the emergence of models of firearms that anyone can print on 3D-printer, threatens the uncontrolled spread of lethal weapons. The simplest 3D printers can already be purchased for $ 500 and in the near future even simpler models can be on sale, which, among other things, will learn to print objects from ceramic metal blanks.

American experts suggest different measures to combat the uncontrolled proliferation of weapons. In particular, there are opinions that it is more expedient to ban not the manufacture of plastic weapons, but the components for cartridges: in particular, gunpowder.

Ctrl Enter
Noticed a mistake Highlight text and press. Ctrl + Enter
We are
China began to print military aircraft on the 3D printerThe second gun printed on the 3D printer went on sale.
33 comments
Information
Dear reader, to leave comments on the publication, you must to register.