Prospects for the development of Russian UAVs

7 May 2013
56
Currently, the development prospects of combat unmanned aviation (UAVs for military purposes, the so-called drones) are due to a number of factors. First of all, the ever-increasing price of manned planes and helicopters, the increase in the cost of training pilots for them - while to solve a fairly wide range of problems, having a man today is not necessary. For this reason, the emerging trend towards an increase in the percentage of UAV combat sorties in the future will continue. In addition, many countries are actively working on the development of fundamentally new models and designs of a drone-glider, which would be designed for increased loads in comparison with manned aircraft, as well as equipping such devices with advanced control systems to simplify the work of the ground operator of the device.


Do not discount the human life - the most valuable thing we have. In this regard, the use of UAVs is the possibility of reducing human casualties among the pilots. Given the fact that modern air defense systems are not only perfect weapons, but also widespread in the world, it becomes even more relevant. The modern air defense system severely limits the use of tactical aviation in almost all theaters of military operations and seriously complicates the possibility of attacking enemy ground targets.

Simultaneously with the development of air defense systems, a major jump occurred in aircraft armament. Today it is a high-precision weapon with a high range of use, which eliminates the need for the aircraft to approach the attacked target. Gradually manned aircraft turns into just a carrier of weapons. The shock functions of modern aircraft are reduced to almost 2-m models. In the event that the attack targets are known in advance, the plane only delivers the weapon closer to them. If the attack targets are identified directly in the course of the hostilities, the aircraft must be on duty in the zone of application in order to ensure the minimum time from the moment the target is detected until it hits. 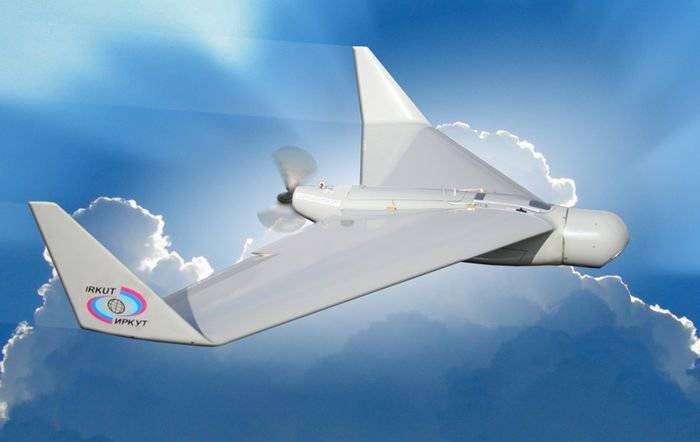 Light UAV "Irkut-10"
In both these situations, they are trying to carry out reconnaissance of targets with the help of separate means, and not with the arms carriers themselves. Since, the longer the aircraft "hangs" in the zone of the enemy's air defense, the more likely it is to lose. As a result, the pilot is no longer needed to attack ground targets. The pilot loses his function of detecting targets and pointing weapons at them. Moreover, the presence of the pilot makes the aircraft larger in size, which increases their visibility for air defense weapons. Also, manned aircraft are limited by the overloads that a pilot experiences while performing certain maneuvers while evading enemy air defenses or maneuvering when approaching the target. Also, the presence of the pilot reduces the duration of possible patrols.

All this together leads to the abandonment of the use of manned aircraft to combat ground targets. At the same time, fighter aircraft will remain manned for quite a long time, since replacing a fighter pilot in air combat is much more difficult than solving the task of delivering various weapons to a ground target.

The domestic program for the creation of unmanned vehicles in the interests of the Russian Armed Forces is designed to overcome a strong lag in this area from the leading countries of the world. Today, many countries, including Russia, are capable of producing light UAVs. A large number of Russian companies produce sufficiently high-quality samples of small UAVs of short range that are capable of flying at low altitudes. Such UAVs are used by Russian law enforcement agencies, the Ministry of Emergency Situations, civilian companies, and even are sold abroad. However, with high-altitude UAVs that have a significant range, everything is not so good, in this area the leadership of the United States and Israel is undeniable. Even European countries are forced to acquire their equipment, although they continue to work on developing their own models. And here Russia has one more problem, we, unlike some European countries, cannot purchase ready-made armaments if they cannot be produced independently.

This happens for 2 reasons. First of all, no one will sell us a truly modern technique - it so happened that for the leading countries in this field, Russia is a “likely enemy”. It was not possible to acquire enough modern equipment even from Israel (partly because of the desire of Israel itself to maintain the technological gap from a likely competitor in the arms market, and partly under US pressure).

UAV "Altius"
Secondly, for Russia the development and production of its own military equipment is a matter of national security. Russia cannot depend on any external sources of supplies of military products, as they may cease at the most inappropriate moment for this. In addition, any exporter of high-tech armaments tries to exclude the possibility of using these weapons against themselves, allied countries and even third parties, if this somehow contradicts their own interests.

Taking this into account, at present, on the order of the Russian Ministry of Defense, work is underway in our country to create 3-type UAVs. The first of these is the “Pacer” medium-altitude operational tactical drone with take-off weight up to 1 tons. According to its characteristics, it is close to the American MQ-1 Predator. The second drone (called the "Altius") - weighing up to 5 tons should have a great height and duration of flight, in its characteristics it is analogous to the American MQ-9 Reaper. Perhaps this UAV will be able to deliver rocket attacks on ground targets. The third promising Russian drone is a heavy drone UAV (R & D project “Hunter”), there are simply no serial analogues of this unit in the world today, but work in this direction is underway in many countries.

At present, information on all these three projects can be found quite a bit. All of them are at the stage of research, therefore, it is rather difficult to speak about any specific characteristics of promising Russian UAVs. In particular, for the “Pacer” project, there is information only about the cost of carrying out research and development work on the project - 1 billion rubles. The competition for the work was won by the St. Petersburg group of companies "Transas".

The competition for the creation of UAV "Altius" won Kazan OKB "Sokol", the contract amount also amounted to 1 billion rubles. The result of the work of the Kazan Design Bureau was the development and creation of a prototype demonstrator "Altius-M". 5 February 2013 of the year during the visit of Russian Defense Minister Sergei Shoigu to CAPO im. The Gorbunov (Kazan) UAV model developed by the Altius-M R & D project was first publicly demonstrated. It is assumed that the tests of the flight model of the drone will be launched in 2014-2015 years.
UAV "Altius-M" is made according to the normal aerodynamic design and has a wing of large span with 2-TVD and V-shaped tail. Mass of the device - up to 5 tons. Many UAV systems - onboard control equipment, power supply systems - will be fully or partially unified with UAV counterparts developed under the Pacer project by Transas. 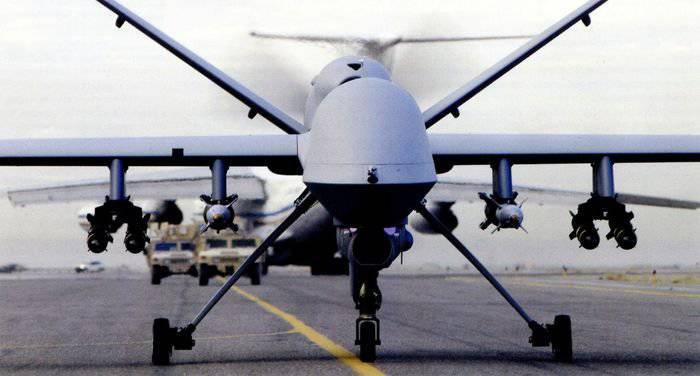 UAV MQ-9 Reaper, USA
In 2011-2012 years in EMZ them. Myasishchev planned on the basis of the high-altitude aircraft M-17РМ to begin the development of a flying laboratory for the development of the on-board control complex of the promising Russian UAVs "Pacer", "Altuist-M" and "Okhotnik-B". It is noteworthy that M-17PM (M-55 "Geophysics") are going to choose to test the drones. This aircraft has a maximum flight altitude greater than 21 km. In this case, if other platforms did not fit for testing new Russian UAVs, the creators of Russian UAVs may have swung at very high altitudes.

Of particular interest is the creation of a large impact drone, since it is he who is the most difficult part of the program. Currently, the development of a specialized UAV, which would be close in its capabilities to tactical aircraft, is too tough for even market leaders. Moreover, the United States came closest to success. America already has drone drone conventional schemes and experience in their combat use. In addition, a number of programs to develop a new drone drone (such as the Northrop Grumman X-47A, Boeing X-45 and X-46) were closed, but this does not mean that the development of these projects have passed without a trace. Over time, all research results and the experience gained by companies will be embodied in a real combat vehicle.

The project of the Russian heavy impact UAV within the framework of the Okhotnik research and development project involves the creation of a vehicle weighing up to 20 tons. Its development in the interests of the Russian Air Force is the company "Sukhoi". For the first time, the military announced their plans to get into service a drone drone at the MAKS-2009 air show. According to Mikhail Pogosyan’s statement, which was made in August 2009, the creation of a new Russian drone UAV will be the first joint work of the relevant units of the Sukhoi Design Bureau and the MiG RAC, the official agreement on this issue was signed by aircraft manufacturers in October 2012.

The technical assignment for the new drone drone was approved by the Russian Defense Ministry in early April 2012. At the same time, information began to appear in the press that the new shock UAV, developed by Sukhoi, would simultaneously be a fighter belonging to the 6 generation. It is assumed that the first model of the new drone will begin the active test phase no earlier than 2016, and its adoption is scheduled for the 2020 year. By design, this unit will presumably be manufactured according to a modular scheme, which will allow the military to easily change its payload depending on the assigned combat missions. 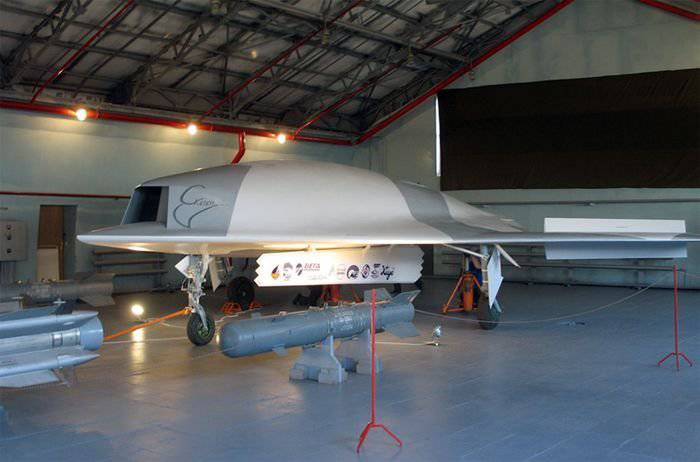 Scat UAV model
It is worth noting that the RAC "MiG" had its interesting experience on the drone drone, we are talking about the heavy unobtrusive attack UAV "Skat". The full-size model of this aircraft was first shown at the Max-2007 air show. Then this model made quite a lot of noise, since work in this direction is work on creating the most complex and advanced types of military equipment, the development of which is not available for most countries of the world. However, the work on this project went rather slowly and the developers did not advance further on creating a full-size mockup.

In this sense, combining the efforts of different companies (Sukhoi Corporation and RAC MiG) to implement a fairly complex project seems justified, this is quite common global practice. And the choice of the corporation "Sukhoi" can hardly be called accidental. This manufacturer of manned military equipment has the most sophisticated flight control automation systems, which are installed on the Su-30 and Su-35 serial fighters, as well as the Su-34 front-line bomber. These systems are able to simplify the process of piloting airplanes with an unstable aerodynamic scheme, reducing control of the most complex aircraft to simple manipulations for the pilot.

In general, it can be noted that in Russia everything is not so bad in the field of UAV development. Although at the moment there are very few unmanned systems in the Armed Forces of the Russian Federation, it’s still possible for Russia to change this state of affairs, not by acquiring foreign technology, but by domestic developments. In addition, the deadlines for the implementation of the most promising Russian programs are comparable in terms of implementation with promising foreign projects.