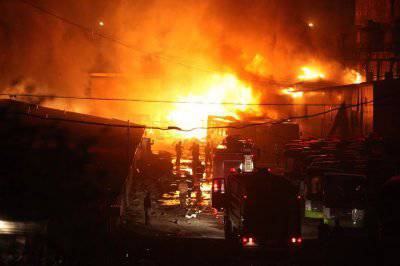 It was Easter night from 4 to 5 May. The Orthodox Christians of the whole world looked upon the gracious fire in Jerusalem, and at that time a completely different fire was born there - hellish. The Orthodox Christians of Syria (of which there are many) also prepared to celebrate the Day of the Resurrection of Christ. And there was a deep night, the silence of which was suddenly broken by a terrifying roar ...


Multimillion Damascus woke up about two nights. It was impossible not to wake up. Residents of the Syrian capital have become accustomed to the explosions - the number of bloody terrorist acts committed allegedly by “fighters for democracy” over the past year is incalculable. But there was something special in power. The first thought is no longer just attacks, it is an attack from the outside. So it turned out. Not without reason, on the eve of the media, they said that Israel had already carried out the bombing of Syria, although it was still a whole day before them.

Two strongest blows, after a while - the third, less powerful. And then - the mortar firing, which had already become customary in the distance, on the outskirts - this was the “case” that the “opposition” terrorists entered, who decided “on the sly” to make an attempt to assault Damascus - it must be said, rather pitiful.

The flame of a fire burned strongly, it was visible from a distance of several kilometers. The impact shook the city and even other localities - then residents of the suburbs of Damascus, located in 30 km. from the capital, they said that they, too, opened their doors. Many townspeople povyalet windows. And, when the doors unexpectedly slammed, it was at first incomprehensible what a strange blast wave. It turned out - an Israeli strike provoked tremors with a power of 4 points. So we celebrated the Syrian Easter.

I involuntarily remembered what was already 14 years ago - then the TV screen showed NATO bombs flying to such a distant but so close Belgrade at the same time. And nonhumans wrote on these bombs "Congratulations on Easter." Incidentally, it was not the same “director” who composed the scripts of “congratulations” both then and now?

So, on the eve of the media, including the Russian ones, they claimed that Israel bombed Syria, ostensibly in order to prevent the transfer weapons Hezbollah to Lebanon (although under conditions when a bleeding country needs every cartridge, such accusations look ridiculous and even somewhat ridiculous). In fact, there were no blows back then. Except for the fact that local armed gangs fired mortars at Damascus International Airport, hitting a fuel depot (which they gave out for an Israeli attack).

The question is - why was needed such a stuffing? This became clear after the raid actually occurred. The Zionists needed to check the reaction of the United States and the West. And she followed immediately after a throw-in of misinformation. Obama said that “Israel has the right to defend itself” (when bombing Syria, of course, they forget about the right to self-defense). British Foreign Minister William Hague, who at the same time again took the opportunity to speak out in support of the terrorists, said the same opinion, stating that if they were not helped, they would not have superiority (and we are also told that in Syria the real "people's revolution "!)

So, the approval was received - and a bloody Easter night came in Damascus, lit up with a bright flame ...

A research center in Jamray was bombed (the same object that the Zionists had already bombed earlier, at the end of January of this year). This time the bombing was much more powerful. The districts of Maysaloun and Dimas were also attacked.

Data on the number of victims varies. The Lebanese television channel Al-Mayadin reported that four people were killed and more than 70 were injured. But in different media, other figures are mentioned - that the victims of night bombardment are more than 300.

It becomes obvious that the purpose of this barbaric raid is a banal provocation. Provocation of a big war that will affect not only Syria, not only the Middle East, but threatens to develop into a new world ... In the event of a retaliatory strike by Syria (to which it has full legal right), the US and NATO interventions will follow.

Immediately after the Israeli aggression, the militants of the so-called “opposition” tried to take advantage of the situation. They bombarded the same area of ​​Jamray with mortars. In their midst, a call was voiced to attack all army units located near Damascus. Several roadblocks were bombarded by bandits. But, of course, there could be no talk of any serious storming of the capital, especially after the recent successes of the Syrian army, which inflicted tangible blows on the gangs.

According to unofficial data, the Syrian air defense was shot down by an Israeli plane that carried out bombardments.

Israeli aggression immediately strongly condemned Iran and Lebanon. The Iranian Foreign Ministry stated that it is leading to the undermining of the security of the entire region, and the Israeli forces and their patrons are doing everything to incite interfaith and inter-ethnic war. According to Foreign Minister Salehi, this act reaffirms the existence of a connection between the Zionist territorial unit and the terrorist groups that are waging war against the Syrian people.

Iranian Defense Minister Ahmad Vahidi pointed out that Israel had previously received the green light from the United States to carry out aggression, which threatens the security of the entire region.

Lebanese President Michel Suleiman pointed out that Israeli aircraft violated Lebanese airspace in order to carry out these bombings. He demanded that the UN Security Council take appropriate measures to force the aggressor to abandon such steps that violate the sovereignty of other countries and violate international decisions concerning the Arab-Israeli conflict. And Lebanese Foreign Minister Adnan Mansour accused the international community of silencing Israeli criminal actions.

The Syrian Foreign Ministry and the Syrian government, which has gathered for an emergency meeting, most strongly declared that such aggressive crimes are unacceptable. The foreign ministry sent an appeal to the UN Security Council, which said that Syria insists on its right to defense, protection of sovereignty and territorial integrity.

The message of the Foreign Ministry at the UN stresses that the statements made by the United States before and after the air raid on Syria, encourage Israel to further crimes of this kind and create a political cover for violating the sovereignty of other countries, all international laws and the UN Charter.
Syria demanded that the UN Security Council fulfill its obligations and take measures to stop the Israeli aggression. This is necessary to prevent the incitement of war in the region, until the situation is completely out of control.

The reaction of Russia, unfortunately, is still rather sluggish. The Foreign Ministry of the Russian Federation expressed only “concern” and “concern” and again urged to observe the Geneva communiqué - and this is in conditions when the bombs of the aggressors actually fell on Damascus. Perhaps later, officials will give more decisive comments about the perfidious attack carried out under cover of night.

Moreover, it is not just a local attack. It is the desire to endanger the whole world, our whole fragile world. And it was not by chance that Easter night was chosen for this - it already sounds like a challenge not only to the Syrians, but, first of all, to Russia.

Ctrl Enter
Noticed a mistake Highlight text and press. Ctrl + Enter
We are
Turkey: fighters for democracy came together
145 comments
Information
Dear reader, to leave comments on the publication, you must to register.